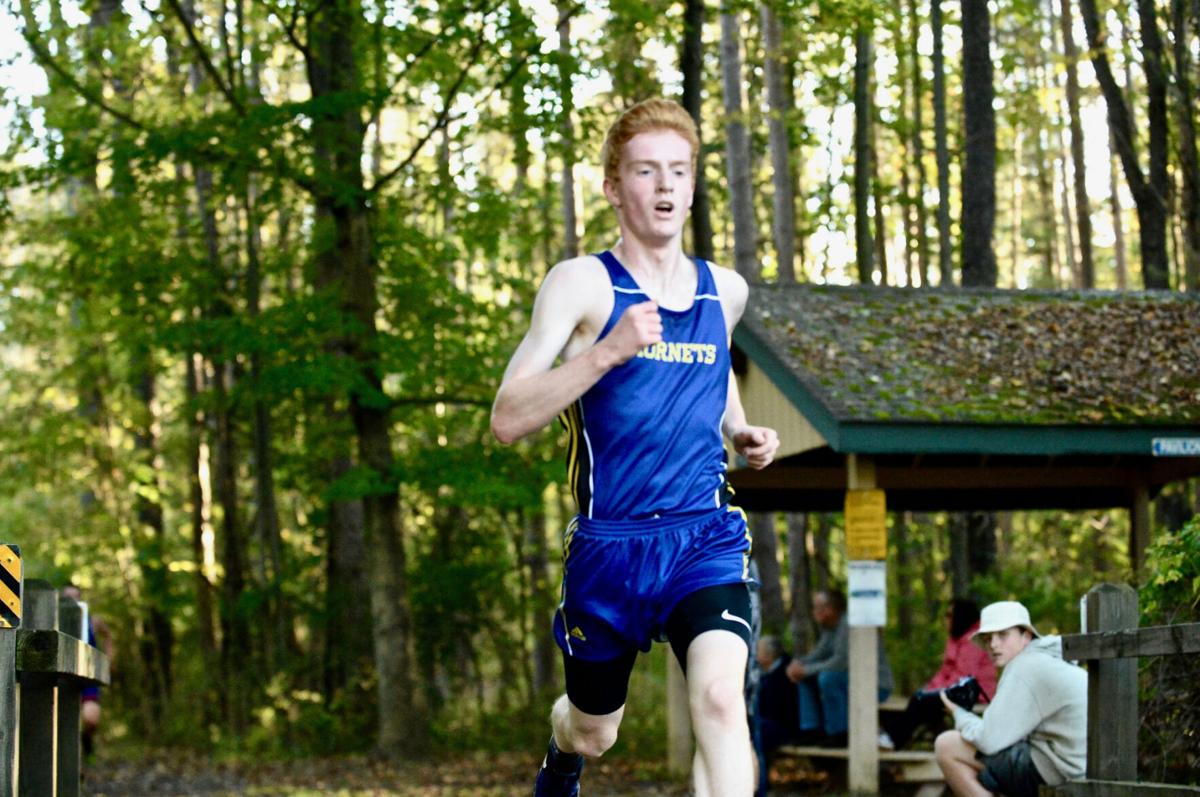 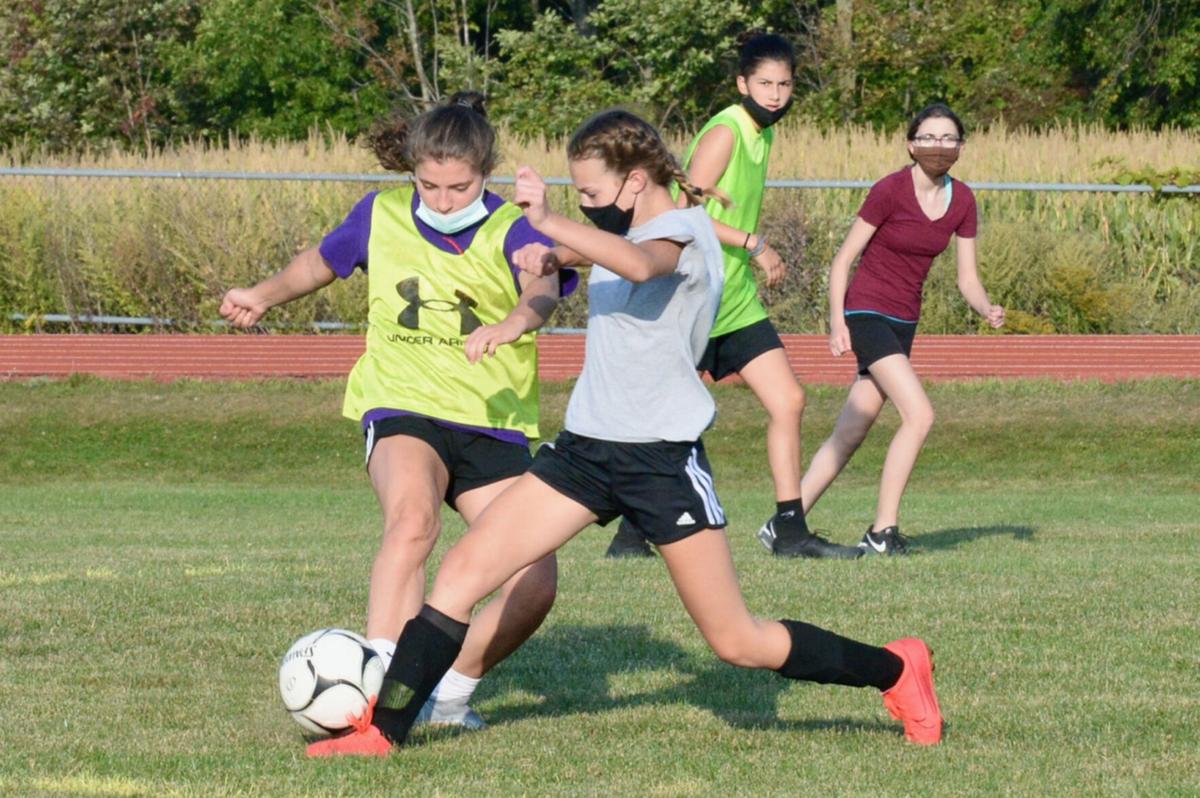 Alex Brasky/Batavia Daily NewsMakena Reding tries to keep the ball away from Alana Chatt during Oakfield-Alabama/Elba’s practice on Tuesday night. 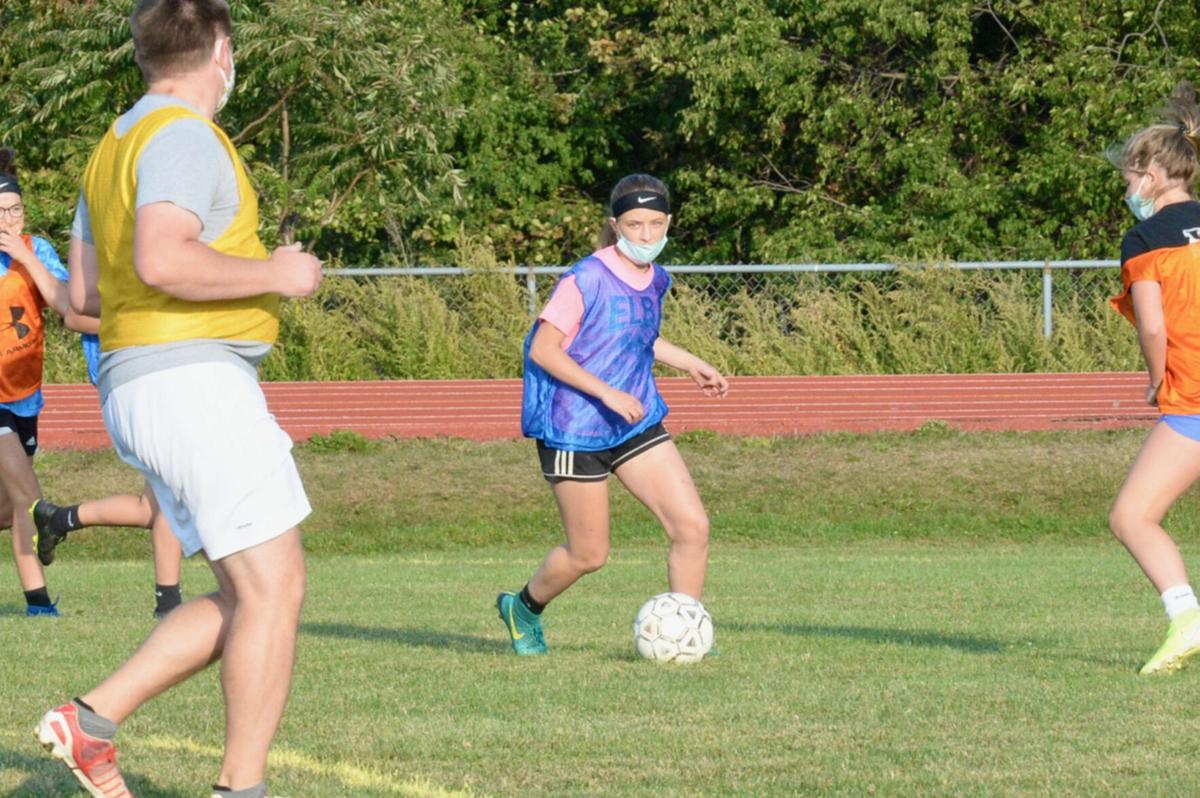 Alex Brasky/Batavia Daily NewsMadison Harrington makes her way through a group of defenders during Tuesday’s practice.

Alex Brasky/Batavia Daily NewsMakena Reding tries to keep the ball away from Alana Chatt during Oakfield-Alabama/Elba’s practice on Tuesday night.

Alex Brasky/Batavia Daily NewsMadison Harrington makes her way through a group of defenders during Tuesday’s practice.

OAKFIELD — It’s been an incredible run for ninth-year head coach Pete Beuler and his Oakfield-Alabama/Elba cross country team, and don’t expect it to end any time soon. The O-A/E girls lost just one senior from a group that captured the GR Division II Championship last year. The boys, many of whom remain from a team that won a sectional title two years ago, placed second both within the division and at the sectional meet in ‘19.

After a long wait, the Oakfield-Alabama/Elba harriers appear ready to further their program’s long tradition of success.

“After the late start and all the changes this year, our team is looking forward to getting out and competing again,” said Beuler. “We look forward to continuing the O-A/E tradition of working hard for each other and representing our program in the best light at all times.”

The Oakfield-Alabama/Elba girls finished last season 15-4 and at the top of their division, their second GR Division II Title in the past three years.

“After graduating only one senior, our girls’ team is ready to get after it,” added Beuler. “They have been gearing up for this season since March, when our outdoor track season was put on pause. They are committed to doing the little things that are so pivotal to succeeding in an endurance sport.”

Fanny Venegas highlights a talented girls’ roster for O-A/E. The senior is a two-time GR League All-Star and is coming off a top-20 finish at the sectional meet last season, and a top-15 finish at the GR League Championships. Another talented runner is junior Kayla Harding, who was honored for the first time as a GR League All-Star in ‘19. Harding placed inside the top-15 at sectionals last season and inside the top-20 at the ‘19 GR League Championships.

Behind Venegas and Harding, O-A/E will be paced by a pack of experienced runners, led by seniors Karly Smith, Ava Flores, and Brooke Uhrinek.

“Those three student-athletes have been in the program since their freshmen year and know what it takes to compete in a very competitive league and section,” said Beuler about the senior trio.

Beuler is also excited to welcome junior McKenna Johnson back to the course this year after injuries abbreviated her ‘19 campaign.

Junior Evelyn Rebert and sophomores Brittany Kennedy and Jadyn Brummert played a role in their team’s success last year and are expected to contribute even more in ‘20.

“To sum it up, our girls’ team is tough,” said Beuler. “They battled last year to achieve that division championship. We must muster that strength once again and run hard for each other. Their resolve is something I’m very proud of and hope to build off of it this upcoming season.”

The O-A/E boys finished ‘19 with a 16-3 record and should be highly competitive once again.

Led by senior Zack Hall, a three-time GR League All-Star and sectional champion in ‘18, Hall was unable to repeat as champion last year but still managed a top-five finish at the Sectional Championships.

“Zack’s very excited for this upcoming cross country season,” added Beuler. “He really focused hard on his training this summer and is pumped for his final season in an O-A/E uniform.”

Hall isn’t the only talented returner for the O-A/E boys, as they boast several runners who proved their worth with successful seasons in ‘19.

Sophomore Kyle Porter burst onto the scene with a top-30 finish at sectionals last season, while junior Jordan Schlagenhauf placed inside the top-50 at sectionals and is another key contributor for Oakfield-Alabama/Elba. Sophomore Colton Yasses and senior Ethan Cornelius are two other runners near the front of the pack for O-A/E.

“Our boys’ team is learning what it takes to compete in a very competitive league and section and we’re excited to build off last year’s team and individual success,” concluded Beuler.

The cross country season kicks off tomorrow league-wide at Geneseo.

Last season, Oakfield-Alabama/Elba finished with their best record since the two schools joined forces in 2015. This season, as the United welcomes back several important players from a year ago, O-A/E is looking to take a significant leap forward.

“We are always looking to build and take a step forward from the previous season,” said United head coach Dave Carpino, who enters his 16th season as head coach. “We are hoping to do that again this year.”

The leading returner for O-A/E will be senior goalkeeper Brynn Walczak, who finished ‘19 as a Genesee Region League All-Star after stopping 232 of the 255 shots she faced and allowing just 1.6 goals per contest.

The team’s second-leading scorer from a year ago, junior Dakota Brinkman, also returns after finishing ‘19 with eight goals and three assists. A young team a year ago with just five seniors in tow, O-A/E now has eight seniors in ‘20 and expects to use its experience to its advantage.

“We are hoping since we were young last year a lot of these girls are going to step up with their added experience,” added Carpino. “We hope we can take that next step as a team.”

Senior Madison Harrington and junior Kelsey Schlagenhauf are each coming off seasons in which they saw the field quite a bit and expect to be a year better this year.

“I’m just happy we get to play,” said O-A/E senior goalkeeper Brynn Walczak during practice Tuesday night. “I think we have a solid team and a chance to be better than we were last year.”

Harrington scored a goal and chipped in three assists last season, while Schlagenhauf spent most of her time on defense. Sophomore Brooke Reding is another talented defender for this team, while sophomore forward Makenna Reding hopes to take a jump after playing a few varsity games last year as a freshman. Freshman Macy Altamirano and C.J. Ryan each played varsity as eighth-graders last season and expect to contribute on the attack for the United in ‘20.

“I think we are pretty excited to play other teams and see how much work they’ve been putting in during the whole break,” said Schlagenhauf.

Oakfield-Alabama/Elba opens the season on Thursday at home against Lyndonville.