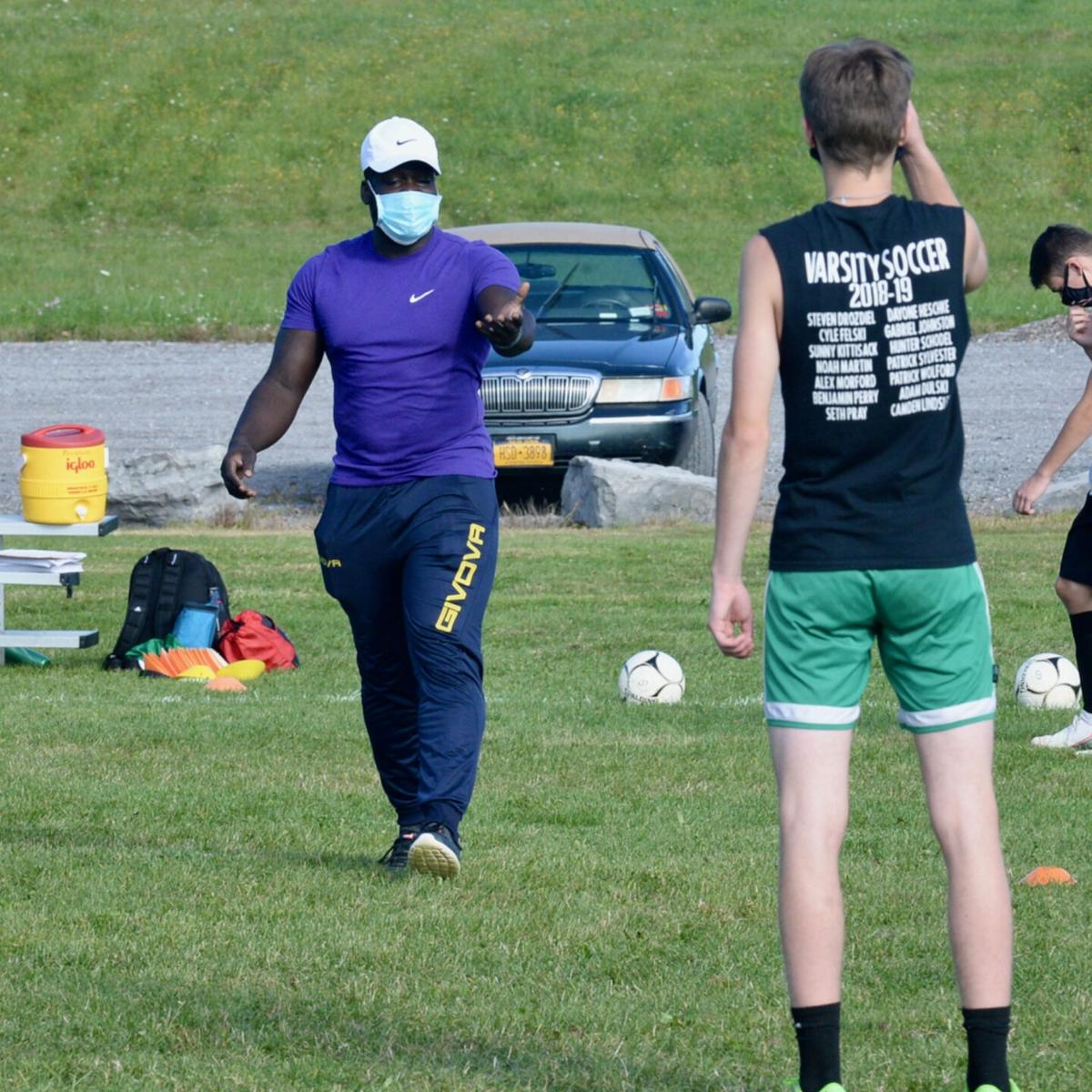 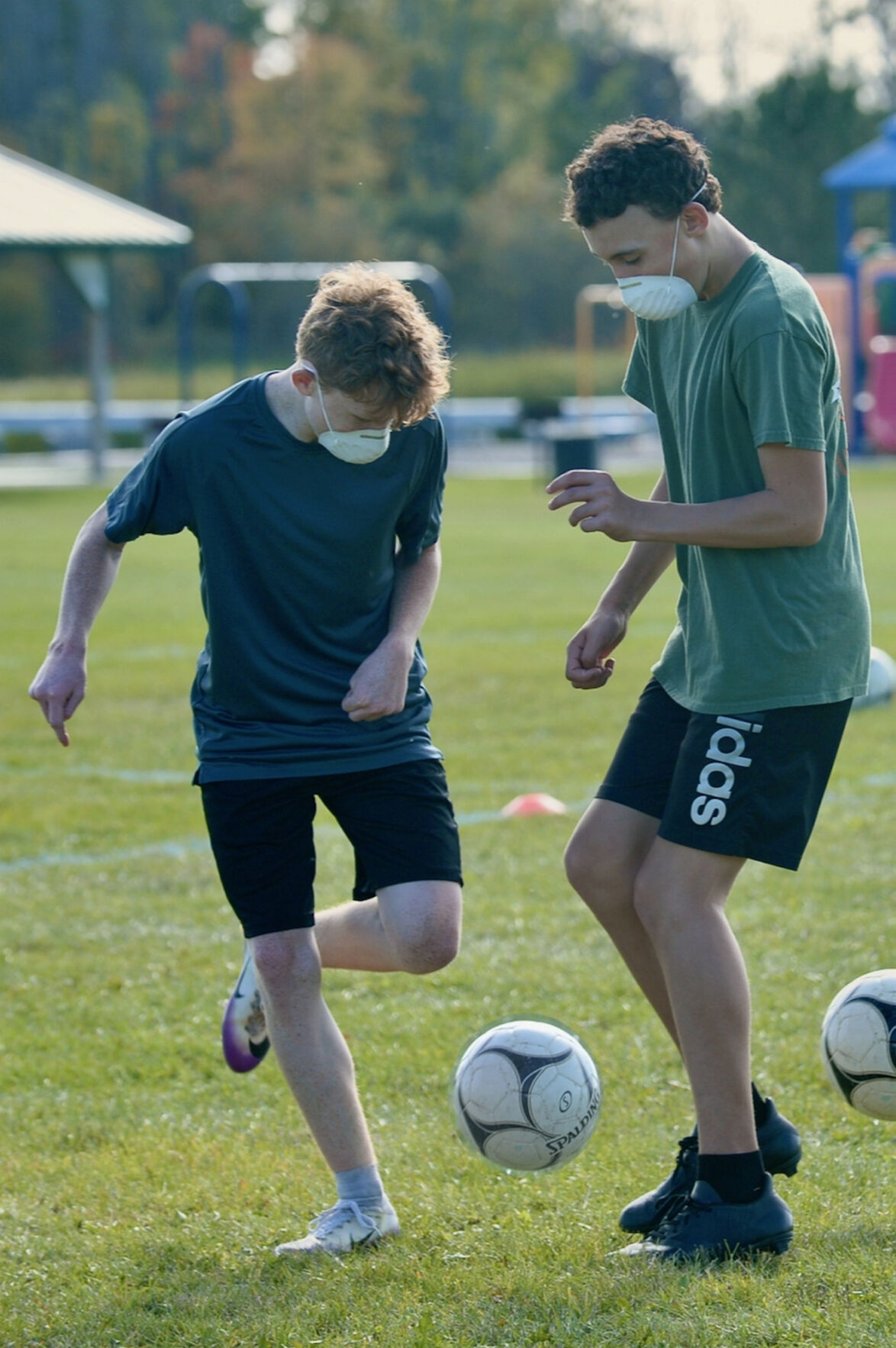 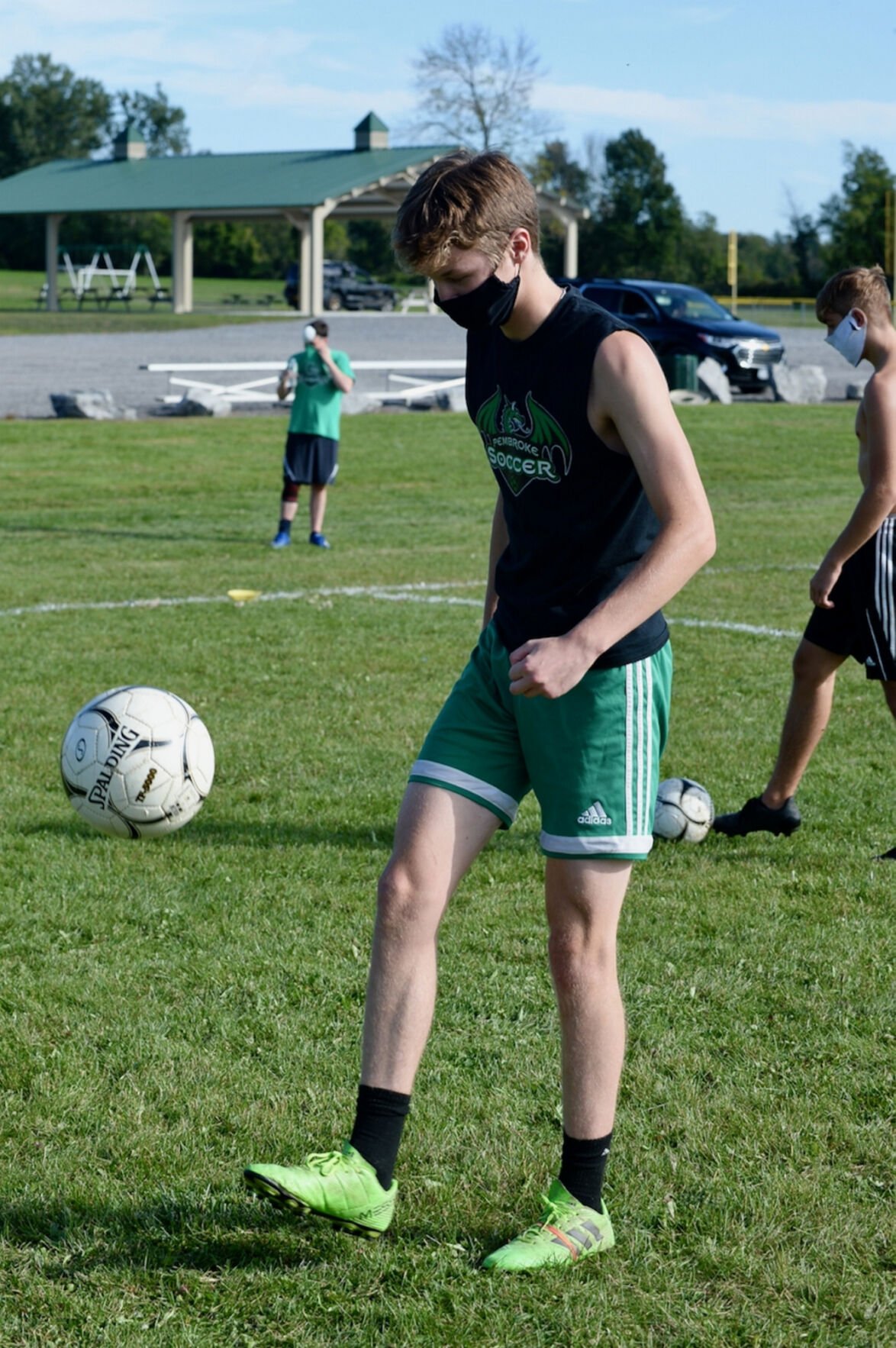 PEMBROKE — A coach with professional soccer experience will take the reins of the Pembroke boys squad this season as Harrisburg Heat goaltender, William Banahene, joins the Dragons for his first season as a varsity soccer coach. Banahene has spent the past few seasons as an assistant coach at SUNY Geneseo and head coach of East Irondequoit’s JV boys team.

Although it’s his first year as the leader of a varsity program, Banahene comes in with a wealth of experience and appears ready to hit the ground running.

“It’s my first year in Pembroke, so I kind of don’t know what to expect, but the kids are buzzing, and they’re taking in all of the information we’re giving them,” said Banahene. “It’s tough having limited time when putting in a new system, but the boys are really taking it in, and I can see improvement from the first hour.”

Senior forward Adam Dulski returns for his final season in the Green and Black, while a trio of juniors, midfielder Matt Curtis, defender Josh Roesch, and goalkeeper Cody Heator. Newcomer Henry Richie, a junior, is another talented midfielder for the Dragons.

“If you look at the roster, we have the main bulk back and a lot of goals back and a lot of technical players,” added the Dragons’ head coach. “Those sophomores last year who played up now have experience and are ready to kind of bully the league. Because they have that year under their belt now.”

One of the primary focuses for Banahene’s squad this season has nothing to do with soccer. The new COVID-19 guidelines that teams have been instructed to follow have been challenging, especially for a team under a first-year head coach. With that said, Coach Banahene says that his players have been doing a great job adhering to the guidelines, which has made things easier for him as a coach.

“It’s not an easy situation to wear the masks,” said Banahene. “But the guys are taking it and making my job easy because it’s not a constant nagging or reminder. When I tell them to wear the mask, they do it. That’s the beauty of the squad that we have.”

The Dragons finished last season 3-13-1, but are hoping for increased success this year.

“We have a young, disciplined team that is adapting to a new system very well,” concluded Banahene. “I believe that we will be a very dangerous team when it all starts to click.”

The Dragons open the season at home against Attica on Oct. 5.

Another first-year head coach will lead the Dragons’ girls soccer squad, as April Meier has taken the reins and expects an improved season from her squad.

“Our focus for the 2020 season is to build strong team foundations and connections,” said Meier. “We will also prioritize playing with intention and perseverance.”

Meier’s team will be led by a group of four seniors, while the Dragons’ roster features several talented underclassmen and a couple of exciting newcomers as well.

Seniors Rebecca Cox, Montana Dieter, and Abigail Duttweiler help round out a strong Dragons’ roster, while junior Heather-Penkszyk-Naylor scored six goals last season and will provide Pembroke with another scoring option on the attack.

Along with those returning, freshman midfielder Jada Everett and eighth-grade midfielder Seneca Calderón are expected to contribute this year.

Pembroke will begin the season on Oct. 6 at home against league rival Alexander.

The last of the Dragons’ three first-year head coaches, Toby Beahan is set to usher in a new era of Pembroke cross country. Having coached at the modified level for the past 10 seasons, Beahan has been preparing for this opportunity for a decade and is primed, and ready to lead his group of runners to a successful campaign.

On the girls’ side, the Dragons will be paced by ‘19 sectional champion, sophomore Leah Filter, who placed 13th out of 109 runners at last season’s sectional meet. Filter will be joined by fellow GR League All-Stars, senior Emily Peters and junior Ainsley Czechowicz. That trio helped Pembroke to a third-place finish as a team at the ‘19 sectional meet.

The efforts of junior Riley Yager and sophomores Mya Grant and Rylee Seelau will also propel the Dragons.

The Pembroke boys competed as an incomplete team in ‘19 but have better numbers this season.

Top-returners for the Dragons are a trio of juniors, Sebastian Kitt, Elijah Seliger, and Devon Vaughn, while a group of newcoming freshman, Avery Ferreira, Everett Hartz, Sam Pfeiffer, and Anneka Pray, help round out the roster.

“Those three have ran two years of modified cross country and are off to a great start in our varsity program,” said Beahan.

Kitt earned honorable mention at the league championship meet last season with a 28th place finish and will be the leader of the pack this season.

“I’m excited for this year’s team. We have a great mixture of returning veteran runners who are providing leadership and setting a high bar of excellence,” added Beahan. “We also have a great group of young, talented, enthusiastic new varsity runners who will solidify our team for this season and on into the future.”