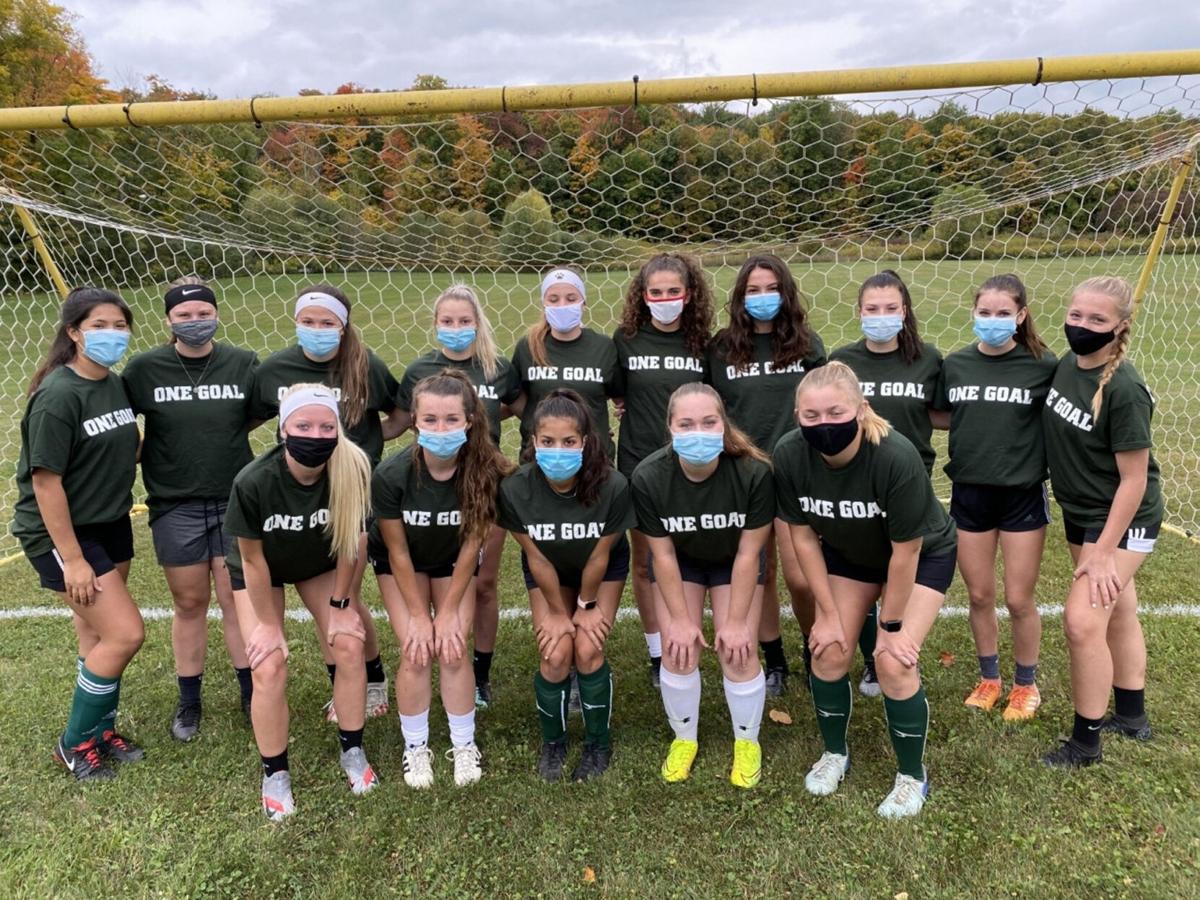 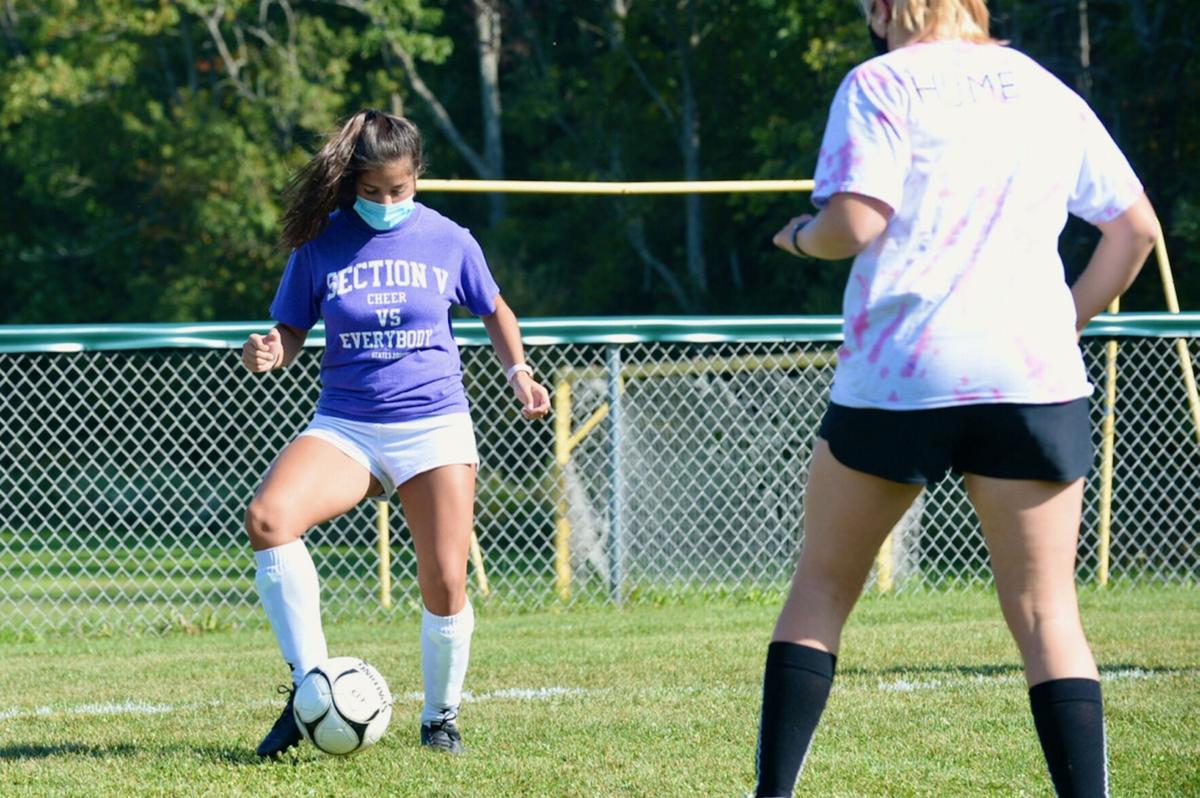 Alex Brasky/Batavia Daily NewsMaleina Pellegrino kicks the ball back and forth with teammate Nicole Hume during the first week of Alexander girls soccer practice. 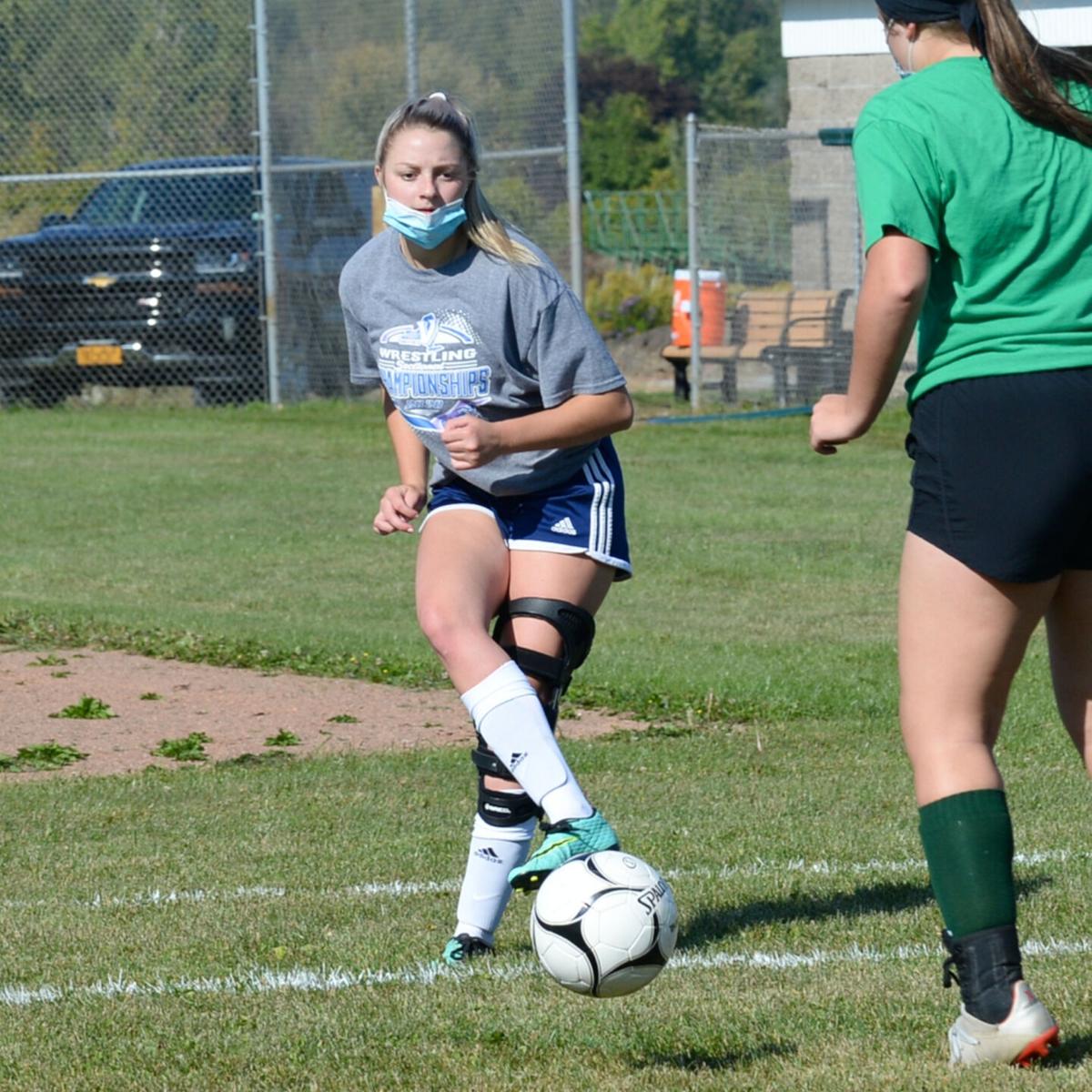 Alex Brasky/Batavia Daily News Saw Sawyer is one of many local athletes to have switched sports this fall, with their primary fall sport being postponed until the spring.

Alex Brasky/Batavia Daily NewsMaleina Pellegrino kicks the ball back and forth with teammate Nicole Hume during the first week of Alexander girls soccer practice.

Alex Brasky/Batavia Daily News Saw Sawyer is one of many local athletes to have switched sports this fall, with their primary fall sport being postponed until the spring.

Coming off a 1-15 finish a year ago, the Trojans are hoping for a major leap forward this season behind a growing group of talent, led by a trio of strong seniors.

Maleina Pellegrino, midfielder Allison Mileham, and goalkeeper Nicole Hume each return for their final season in the Green and Gold, and boy, are they excited.

“I think I speak for all of us when I say that we’re really excited to have the opportunity to play again,” said Pellegrino, the team’s top-returning defender. “We lost some talent last year, but I think we’re coming back with a stronger team. We got a couple players back from other sports that couldn’t happen so we’re really excited.”

One of those athletes that came over to the girls soccer team after spending years on the volleyball court was Sam Sawyer, who is looking forward to her first time kicking the soccer ball around since she was a young girl.

“I think we’ll be pretty good this year,” said Sawyer. “There’s no more excuses this year because we aren’t a younger team anymore. We got some key players back and all of us have been clicking well together on the field.”

One of the key changes to this year’s dynamic has been the COVID-19 guidelines put in place to quell the virus’s spread. The most obvious change has been that athletes must now where masks at times throughout practice, but Trojans’ junior midfielder Natalie Whitmore, another key player for Alexander who finished with three goals last season, says she and her teammates are doing their best to be there for one another through a difficult situation.

“We definitely have been trying to encourage each other,” said Whitmore. “We know its harder for everyone with the masks on but we’re just trying to pick each other up.”

Alexander head coach Robert Adams, who is also the school’s athletic director, has seen nothing but compliance from his team early on. Adams says his players know what’s at stake and are prepared to do what’s in their power to make this season a success.

“We were clear with our guidelines right up front and we’ve got a positive reaction from our athletes,” said the Trojans’ HC. “They’ve been nothing but compliant about everything and the same with our community as well. We know what we have to do to keep this thing moving forward and we’re prepared to do so.”

Adjusting to a new dynamic has been especially difficult for such a young team, as beyond the Trojans’ three returning seniors, a list of underclassmen fill out the roster - including Whitmore and fellow junior standout Carly Burgess who netted three tallies in ‘19, along with exciting ninth graders Aaliyah Wright and Madison Fuller. Fuller scored one goal and added an assist as an eighth grader last season.

“We’ve all been in that position before, being the younger player,” said Hume, who scored one goal while also recording an assist in ‘19 despite spending the majority of the season in goal. She will play defense this year.

“At the end of the day we’re one big family,” added Hume. “When we were younger the older kids helped us along, and that’s what (us seniors) are trying to do for (our younger players) this year.”

Alexander will require all hands on deck as they look to move past a tough ‘19 season, but thus far, Coach Adams has liked what he’s seen from his girls and believes his team could be in for a big year.

“Our girls worked real hard over the summer and just in the early practices we see a strong presence on the field,” concluded Adams. “They’re another year older and they’re ready to rock.”

The Trojans begin the season Oct. 6 at Pembroke.

Andy Buckenmeyer enters his 25th season at the helm of the Trojans’ cross country team and is looking forward to yet another successful year. The Trojans were solid on both the girls’ side and the boys’ side last season and are projected to be one of the GR/LCAA’s top teams once again this year.

For the Trojan girls, who finished 14-5 last season, sophomore Jadyn Mullen highlights a talented roster that expects to be competitive against any team on their schedule. Mullen qualified for the state meet on ‘19.

“She has been working all summer to stay at a high level,” said Buckenmeyer.

“Our girls will be a competitive team that has opportunities when we perform at our best,” continued Buckenmeyer.

Olivia Burkhardt and Ashley Isherwood are two exciting Alexander freshman who hope to contribute this season as well.

The Alexander boys finished ‘19 as Division II champs, recording an outstanding mark of 18-1 behind a number of talented runners. This season, with a bunch of athletes expected to see their roles increase, Buckenmeyer is looking forward to watching this group grow.

“I believe that we will be an improving team as the year goes on,” said the Trojans’ head coach.

Beyond the goals they have set for themselves performance wise, the Trojans cross country program is also hoping they can set a good example of what high school sports during a pandemic should look like.

“We hope that this season will be one of encouragement to other sports by following the protocols and completing the season healthy,” concluded Buckenmeyer.