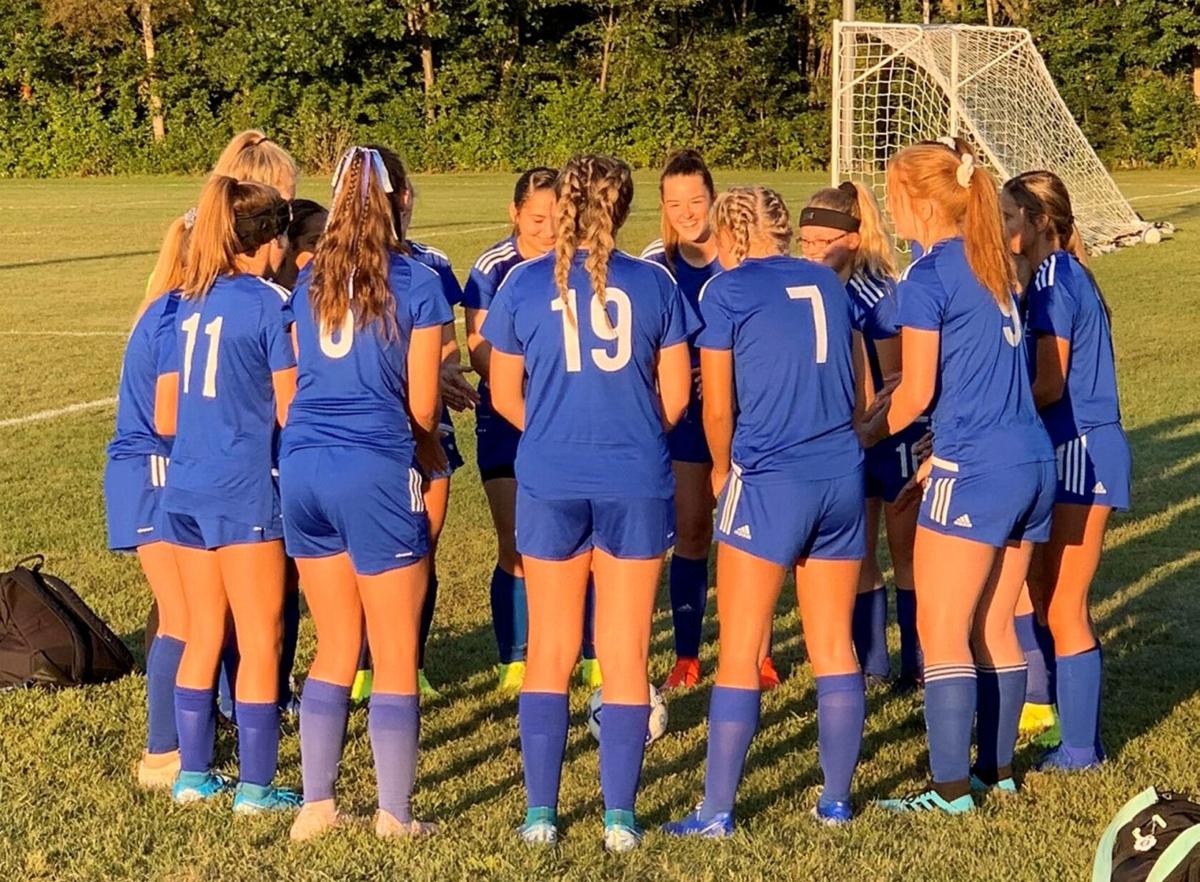 ProvidedThe Kendall girls soccer program aptured the sectional title in 2018 and made the finals a year ago. 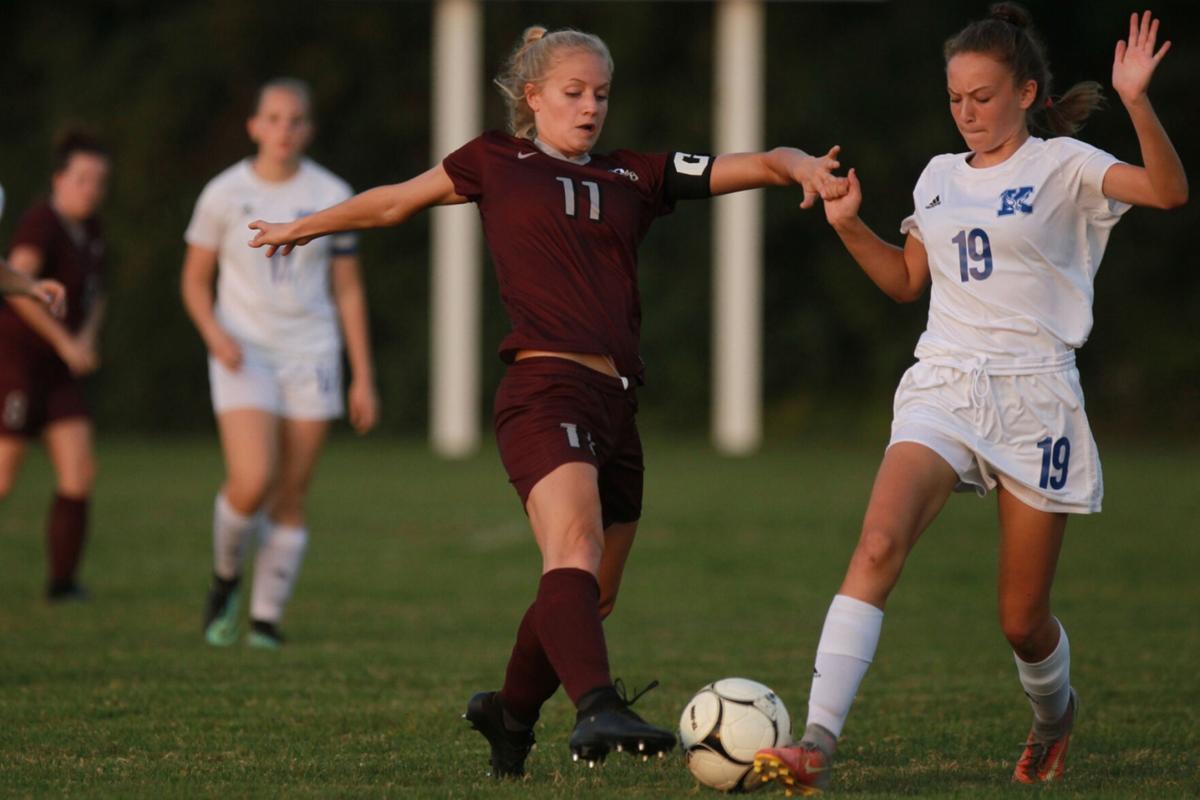 File Photo Kendall’s Brianna Wakefield (19) has been a huge part of the strong soccer tradition the past several years. 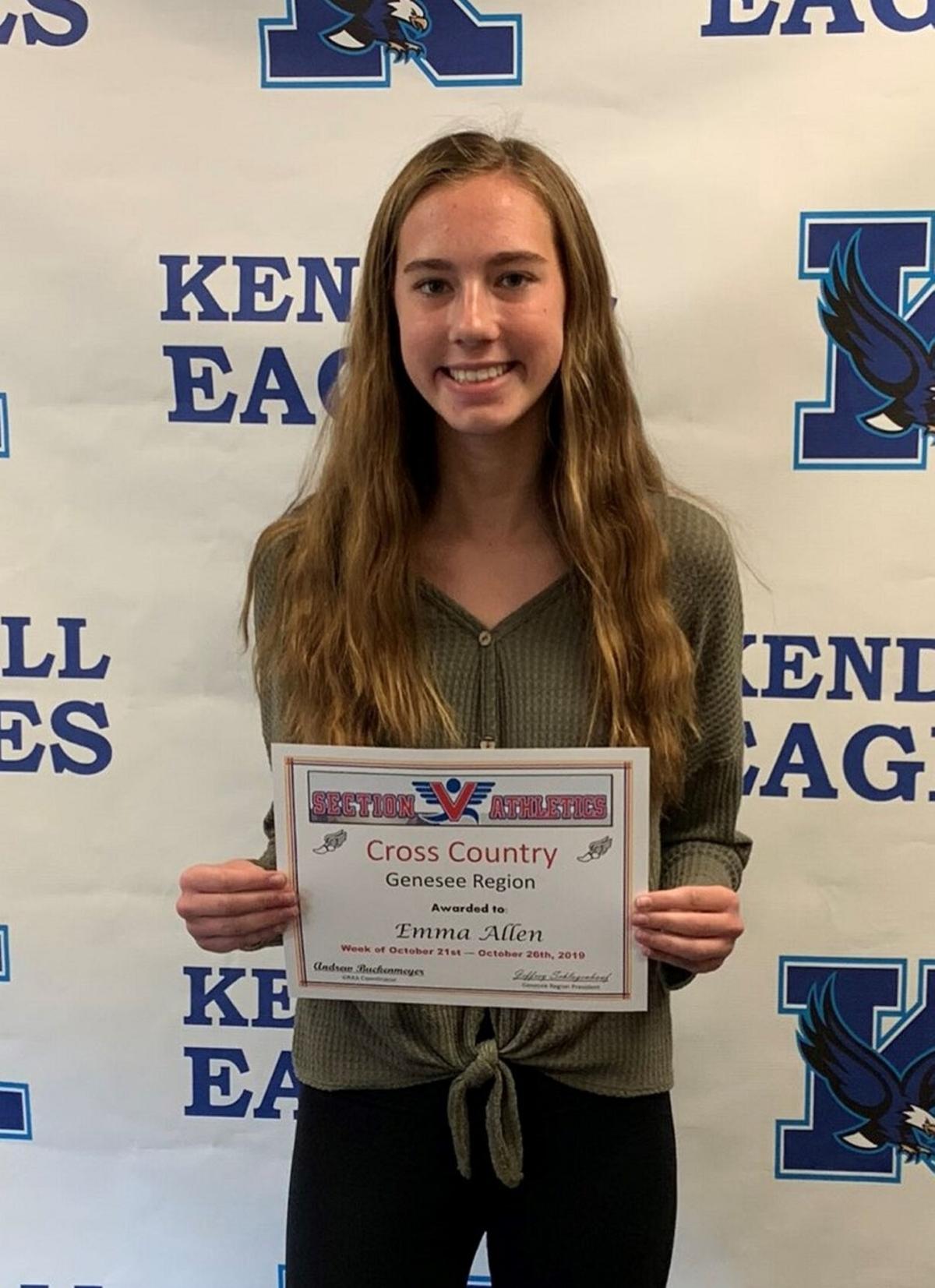 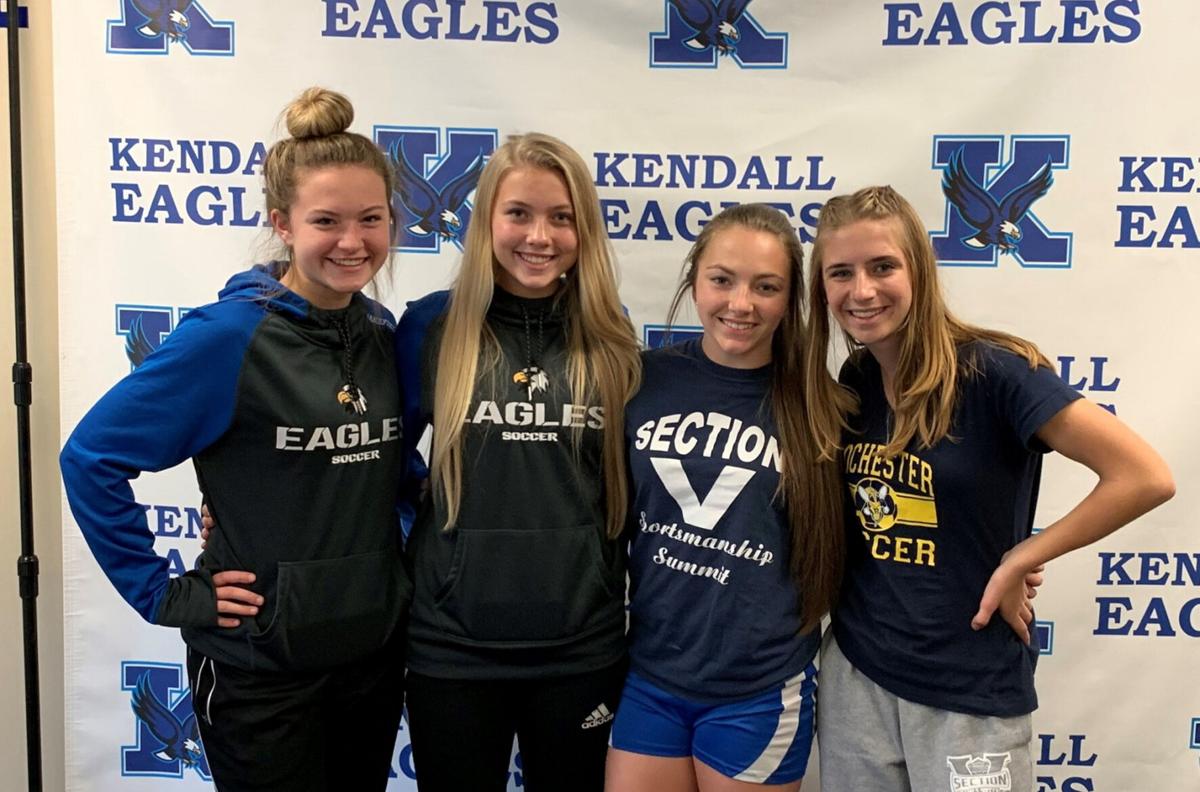 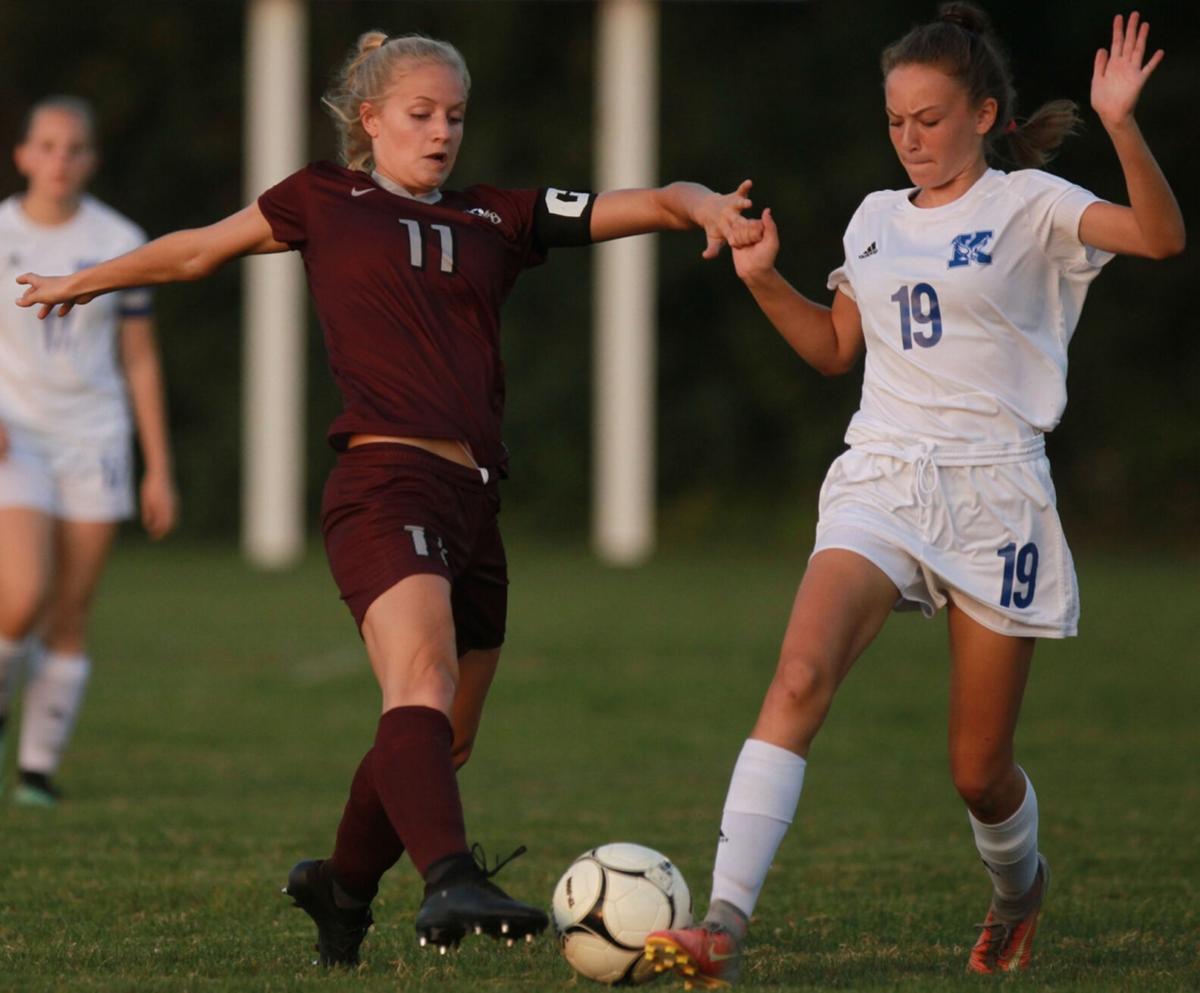 ProvidedThe Kendall girls soccer program aptured the sectional title in 2018 and made the finals a year ago.

File Photo Kendall’s Brianna Wakefield (19) has been a huge part of the strong soccer tradition the past several years.

KENDALL — When a team wins a sectional title, often you see it take a step back in subsequent years. That hasn’t been the case with the Kendall girls, who a year after winning a Section V Championship in ‘18, returned to the final game in ‘19, and enter ‘20 as one of the top teams in Class D.

In her eighth season at the helm, Eagles head coach Pam Barchet believes the sky is the limit for her squad this year.

“We are definitely excited about this season,” said Barchet. “We are returning 11 strong players, so we are optimistic that we will have a strong season.”

Kendall’s leading scorer from a year ago and all-state honoree, Hailee Mitchell, graduated in the spring and is no longer around. Still, returning 56 of the team’s 78 total goals last season, this Eagles’ attack shouldn’t miss a beat.

Senior midfield duo Brianna Wakefield and Madison Jacob each found the net quite often, as Jacob finished her junior year with eight goals to go with 12 assists, which were second on the team to Wakefield’s 13 assists in ‘19. While serving as one of the team’s top goal creators, Wakefield has no trouble doing so for herself and finished with 10 tallies last year.

Junior forward Alezya Brown finished last season second on the team in goals scored with 12. She and fellow junior, T’Mia Kitchings are both key players for the Eagles this season. Kitchings is one of the team’s top returning defenders.

While the Genesee Region League is always a bear to get through for any team, Coach Barchet is cautiously optimistic that this year’s team can equal or improve upon their 15-4 mark from a season ago.

“We have a very difficult league schedule, but we are ready to compete,” said the Eagles’ head coach. “It has been a long off season, but we are glad to be back on the pitch.”

The Eagles’ boys squad is also expecting a big season.

After recording an 8-8-2 record a season ago, the Kendall boys welcome back 10 contributors, including senior midfielder Jacob Esposito - a ‘19 GR League All-Star.

Veteran head coach Peter Leicht is getting set for his 23rd season as head coach of the Eagles’ cross country program. Coming off a year in which both the boys’ and girls’ teams finished with under .500 records, Coach Leicht anticipates an improved season for his runners.

The girls finished 9-10 in ‘19 but have a good core of experienced athletes that hope to lead this team to further success this season.

Junior Emma Allen is the top returning runner for the Lady Eagles after placing in the top-15 at the Class D championships a year ago, a finish which earned Allen her first sectional patch. Another crucial returner for Kendall is ‘19 GR League All-Star Hannah Brundage.

“Hannah is looking great during the preseason,” said Coach Leicht.

Other returning harriers for the Eagles include Taylor Holzschuh and Libby Snyder. Inez Stangler, only an eighth-grader, will make her varsity debut this season after a successful campaign at the modified level. Paige Valente rounds out the girls’ squad.

The boys finished a disappointing 5-14 last season, but were without one of their stronger runners in then-junior Ethan Kuhn. Now a senior, Kuhn is ready to battle back from an injury that cost him his ‘19 season.

“Ethan had a great summer and is looking like the top runner for the boys’ team,” added Coach Leicht.

In Kuhn’s place last season, ‘19 GR League All-Star Braxton Zarpentine led the team and returns as one of the key pieces to what the Eagles hope will be a transcendent campaign.

Senior Josh Gregory returns to the squad after taking last year off, while newcomers Dutch Steffen and Alex King will add depth for the Eagles.

“Dutch came over from soccer and is great athlete with loads of potential,” concluded Coach Leicht. “Both teams will be better this year.”