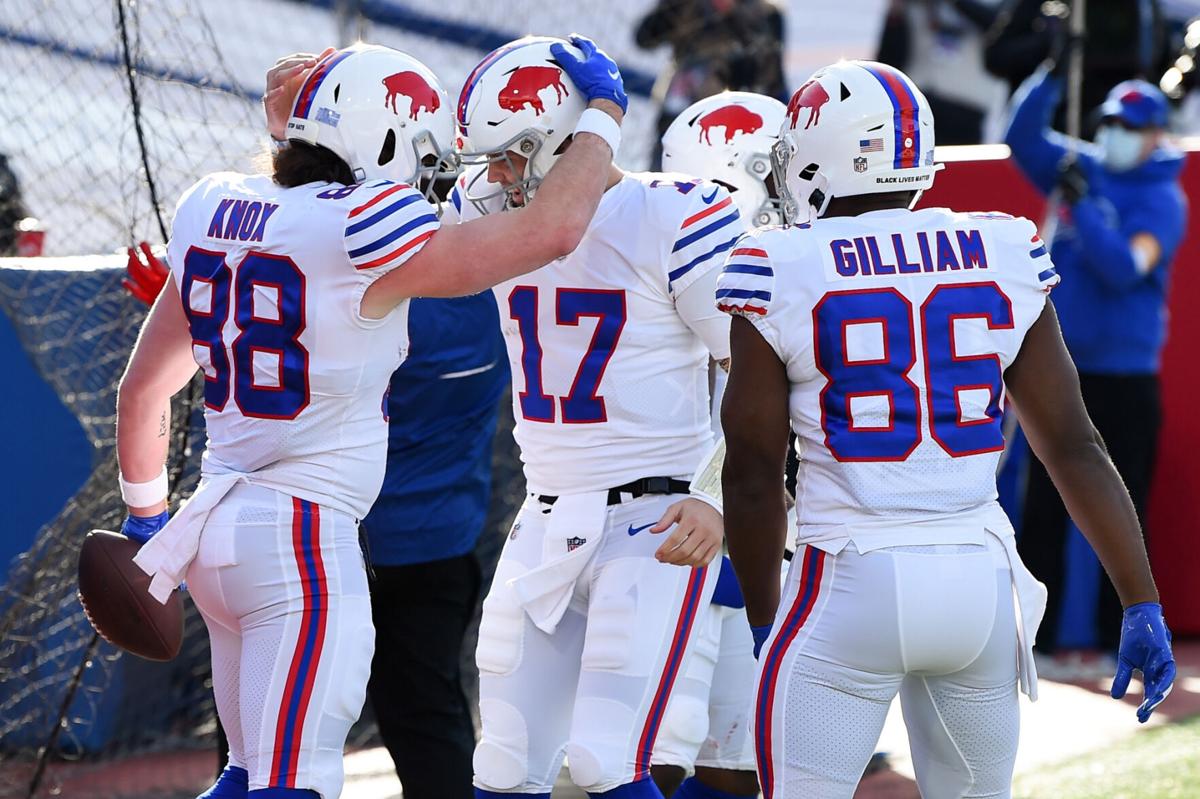 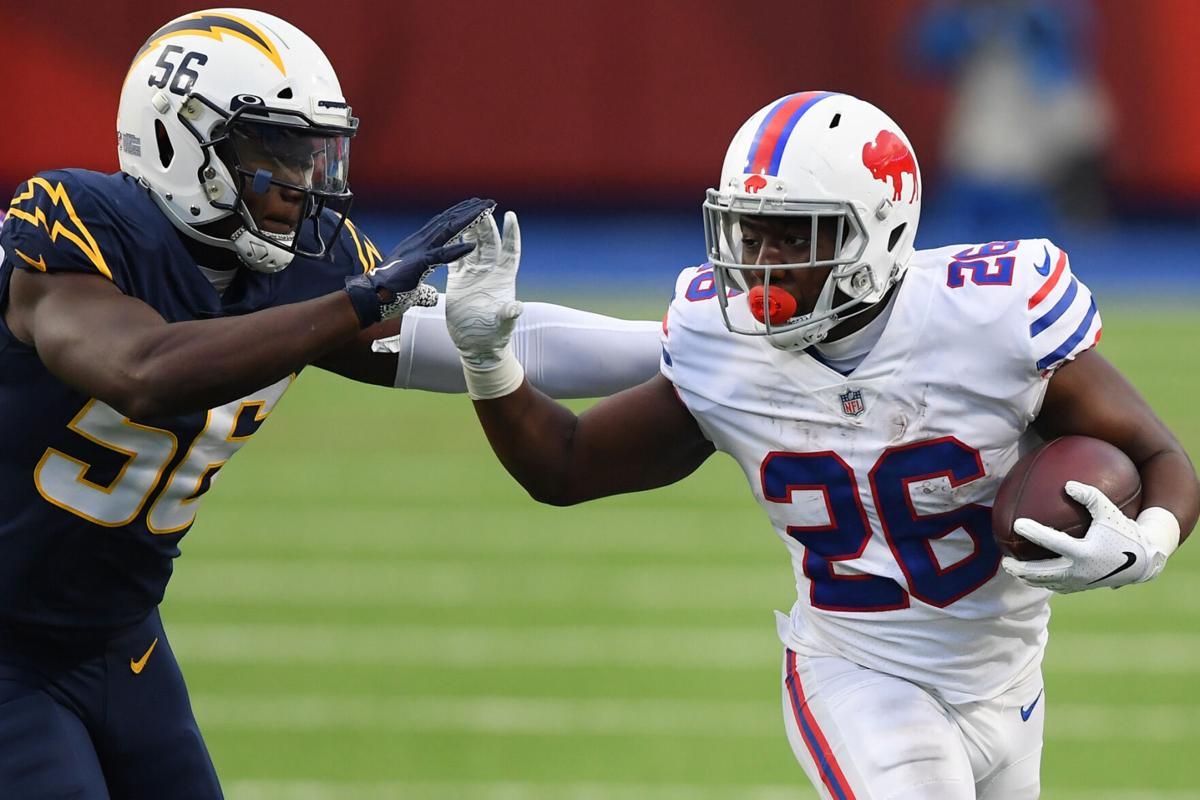 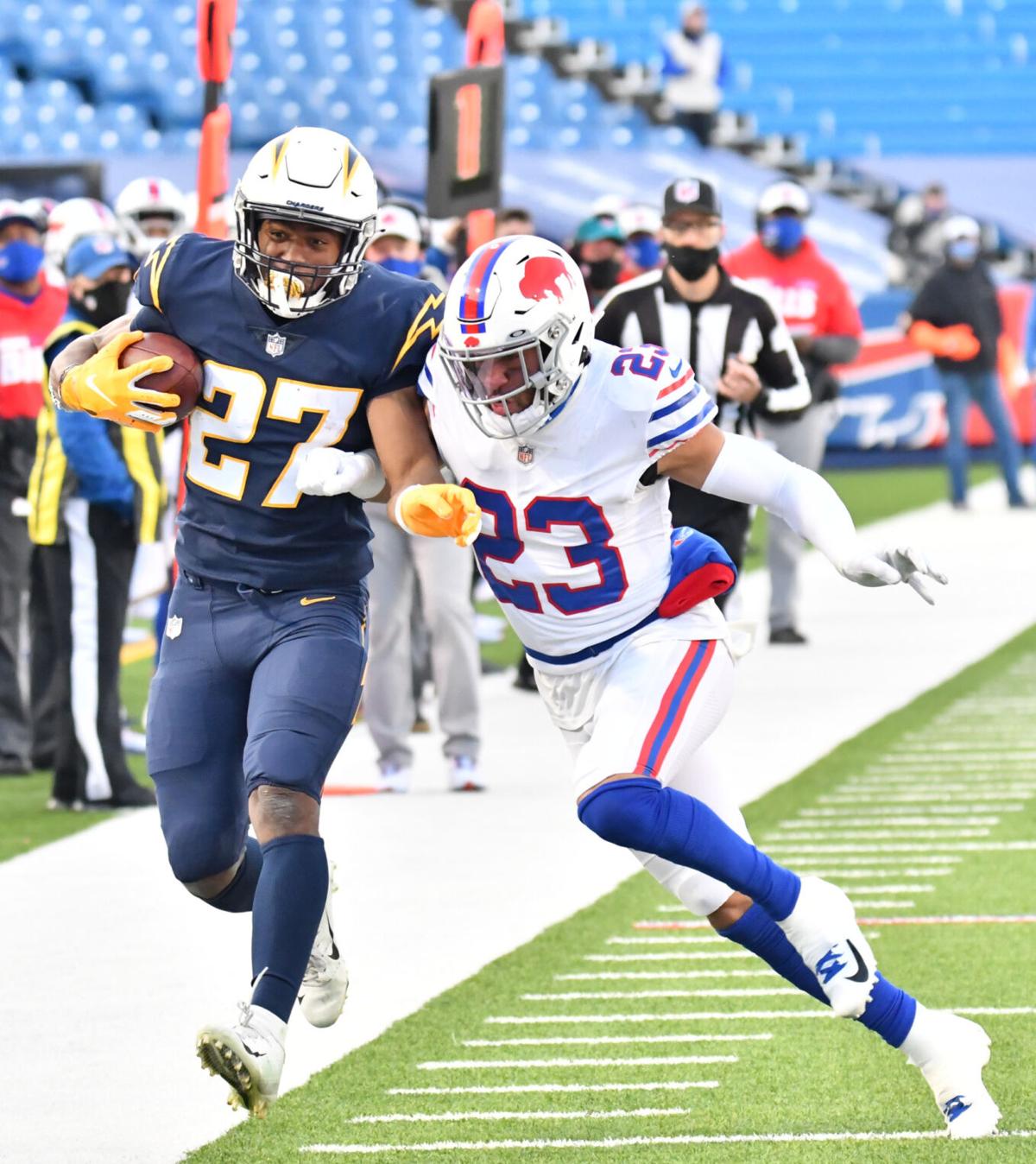 ORCHARD PARK — It wasn’t pretty at times, but the Bills managed to come away with a 27-17 win over the Los Angeles Chargers on Sunday at Bills Stadium. The Bills turned the ball over three times and committed nine penalties for 85 yards, but despite several mistakes, Buffalo held on and advanced to 8-3 with their third double-digit win of the year.

The win was a big one for the Bills, as it maintained their lead over the Miami Dolphins in the AFC East. The Dolphins, now 7-4, beat the New York Jets 20-3 on Sunday, which keeps them within one game of Buffalo in the divisional standings.

The next few weeks are going to be a lot of fun.

The Bills defense was outstanding on Sunday, holding a team that averages 26 points per game to just 17 and limiting Chargers’ rookie quarterback Justin Herbert to just over 300 yards passing and under 60% completion.

Buffalo’s secondary returned numerous players to the lineup, and it showed, as they were able to keep Herbert and the Chargers’ passing game off balance throughout the day. The Bills’ front also played well, sacking Herbert three times and performing well in the run game. The Bills held LA to just 76 rushing yards on 24 carries and came up with a game-sealing turnover, an interception by cornerback Tre’Davious White which came with 5:17 to go.

It was a complete team effort, and defensive coordinator Leslie Frazier must be encouraged with the way his group has been performing in recent weeks.

The Bills’ running game was up and down on Sunday. Running back Devin Singletary played well to the tune of 11 carries for 82 yards, while rookie RB Zack Moss struggled for much of the game before breaking a couple of big runs in the fourth quarter.

Singletary’s work in the run game and the screen game was critical for the Bills, but even he didn’t have a perfect game. Singletary lost a fumble with 14:06 in the fourth quarter which returned possession to the Chargers with the Buffalo clinging to a 10-point lead. It was the first turnover for either side, and it was a big one, as the Chargers were able to convert the takeaway into a field goal, which brought them within one possession with 10:16 to play. Singletary made up for his mistake later in the fourth quarter with a big run for a first down inside five minutes to play. The 24-yard scamper came immediately following a phantom unsportsmanlike penalty on Moss, who managed 59 yards on nine carries. On the same play, which concluded with the unsportsmanlike call, Moss recorded his longest run of the game for 31 yards.

The Bills turned the ball over three times during the fourth quarter, which allowed the Chargers to hang within one possession with time winding down. First, Singletary’s fumble cost Buffalo, then, a mishandled snap was recovered by LA defensive end Joey Bosa with 9:46 to play. Quarterback Josh Allen later threw an interception with 7:00 to go.

It wasn’t only turnovers that cost the Bills against the Chargers, as costly penalties also set them back in a couple of big spots. In the first half, a false start on guard Jon Feliciano made an already long third-down even longer, which the Bills failed to convert. The failed conversion killed what initially appeared to be a surefire touchdown drive and led to Buffalo’s first field goal of the game, a 45-yarder from kicker Tyler Bass with 2:16 remaining in the first half.

Later, in the second half, defensive lineman Ed Oliver had penalties on back-to-back plays, the first a roughing the passer call, which gave LA a first down, followed by a neutral zone infraction before the next snap. Oliver’s blunders helped set up a Chargers’ field goal, which cut the Bills’ lead to 24-17 with just over 10 minutes to go.

That wasn’t it for the Bills in terms of costly mistakes, as a few minutes later, Allen’s interception kept LA’s hopes alive. Despite the pick, the Bills’ defense was able to hold the Chargers on the ensuing possession, and Buffalo followed that up with a field goal on their next drive, a 43-yard clincher from Bass, which was the rookie’s second made field goal of the game and put Buffalo ahead 27-17. Bass has now converted his last seven field-goal attempts.

Tight end Dawson Knox and linebacker A.J. Klein each had notable first halves, with Knox catching the Bills’ first touchdown of the day and Klein finishing the first two quarters with 10 total tackles, a half-sack, and one pass breakup. It’s been a struggle for both players this season at times, but it was nice to see them come out strong on Sunday.

On the two-yard touchdown reception from Knox, the speedy tight end came up with a great grab on a ball that was thrown behind him. Knox isn’t typically sure-handed, so it was a positive sign that he came up with a tough catch. The TD grab was Knox’s only catch of the game and got Buffalo off to a great start.

Klein was all over the field against the Chargers, making plays in the run game and the passing game while stepping up on third down a couple of times. On LA’s first drive of the game, Klein provided solid coverage on a third-down incompletion to Chargers’ tight end Hunter Henry to force a punt. Later in the half, Klein made another stop on a third-down pass to LA running back Austin Ekeler.

Later on, Klein came up with yet another third-down stop, this time with the game winding down in the fourth quarter. On a toss play to Chargers’ RB Josh Kelley, Klein beat Kelley to the edge and ran him out of bounds before he could reach the line to gain. The stop forced LA to kick a field goal.

Klein finished the game with 14 total tackles, 1.5 sacks, three tackles for a loss, and one pass breakup.

It was an excellent game from Klein and Knox, two of the most beleaguered Bills this season.

With veteran wide receiver John Brown out for the next three games, Buffalo was looking for Gabriel Davis to step up on Sunday and that’s exactly what happened. Davis finished the game as the team’s leading receiver with three receptions for 79 yards and a touchdown. The TD grab came on a wide receiver pass from Cole Beasley, who converted his first career completion into six points.

Davis’ continued progression will be critical for the Bills over the next few weeks and into the postseason, as teams will likely begin to focus on Buffalo’s top targets, WRs Stefon Diggs and Beasley.