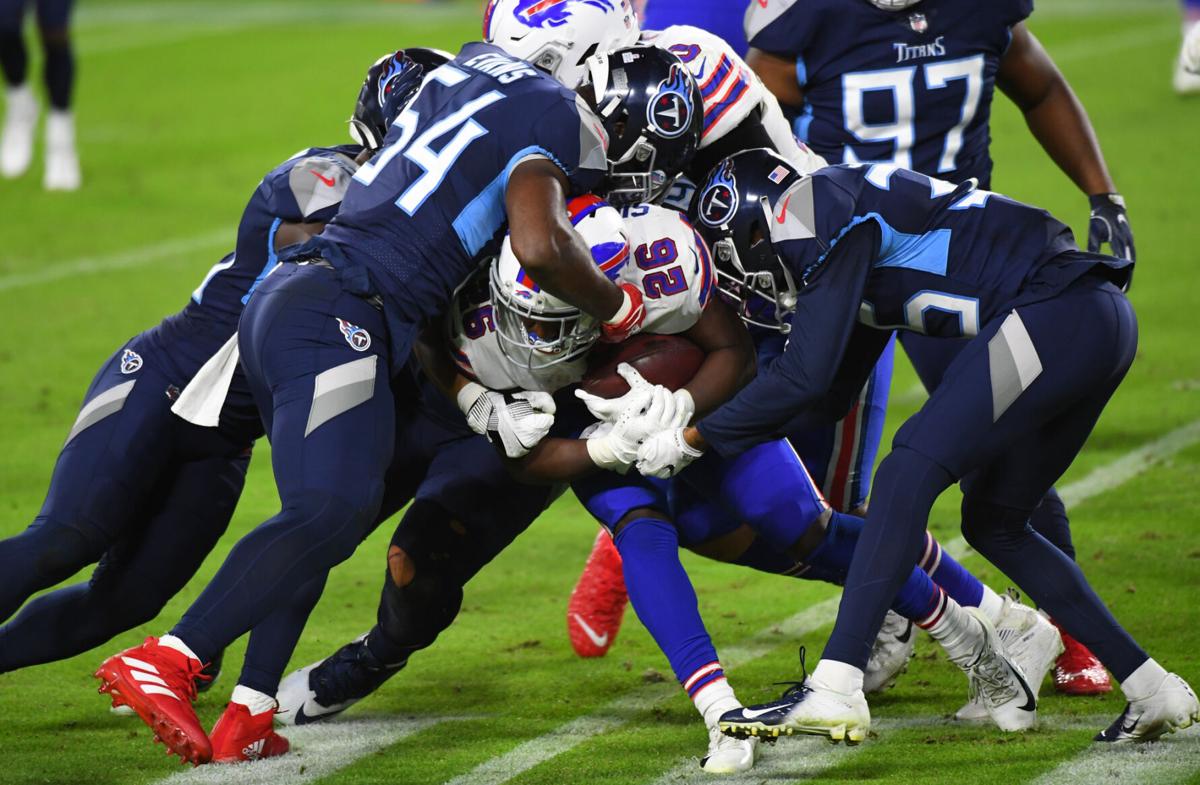 Oct 13, 2020; Nashville, Tennessee, USA; Buffalo Bills running back Devin Singletary (26) is tackled after a short gain during the first half against the Tennessee Titans at Nissan Stadium. Mandatory Credit: Christopher Hanewinckel-USA TODAY Sports 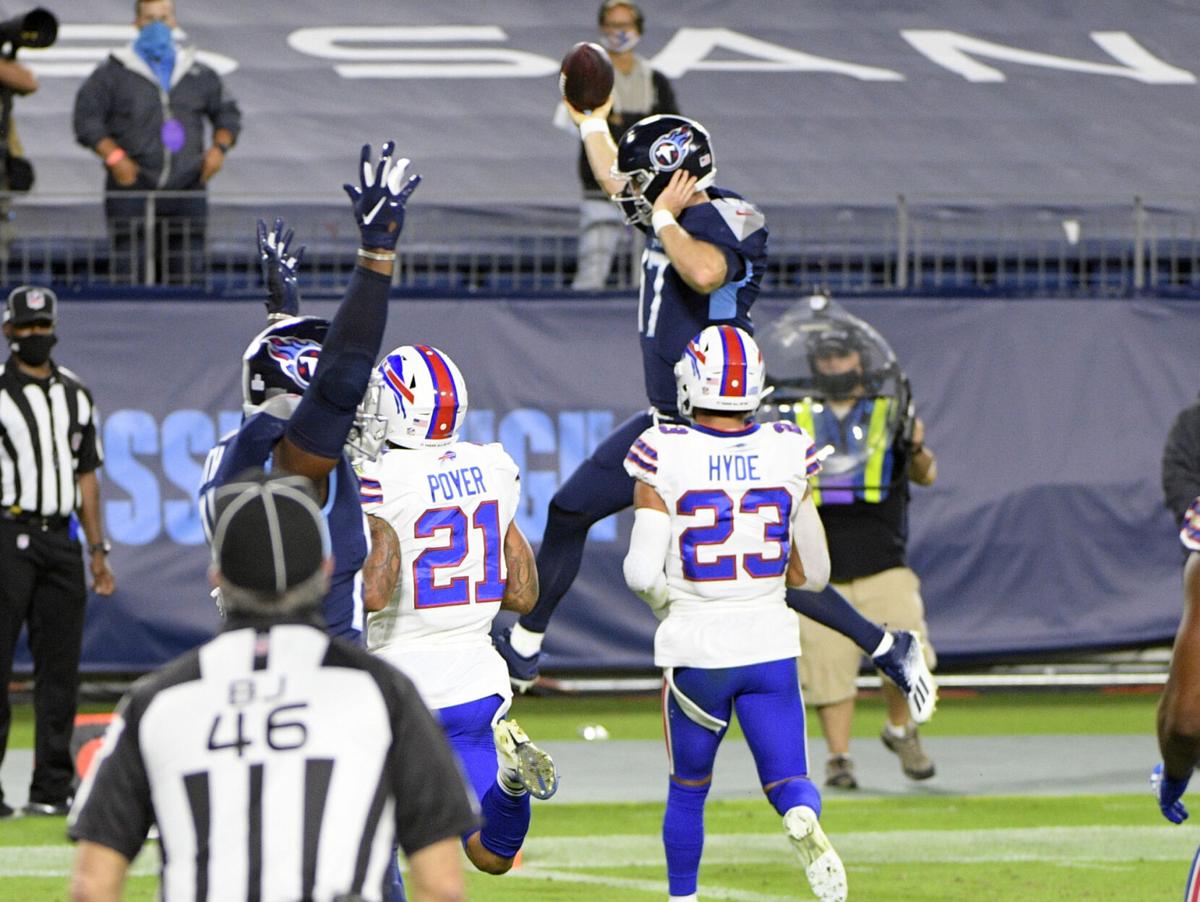 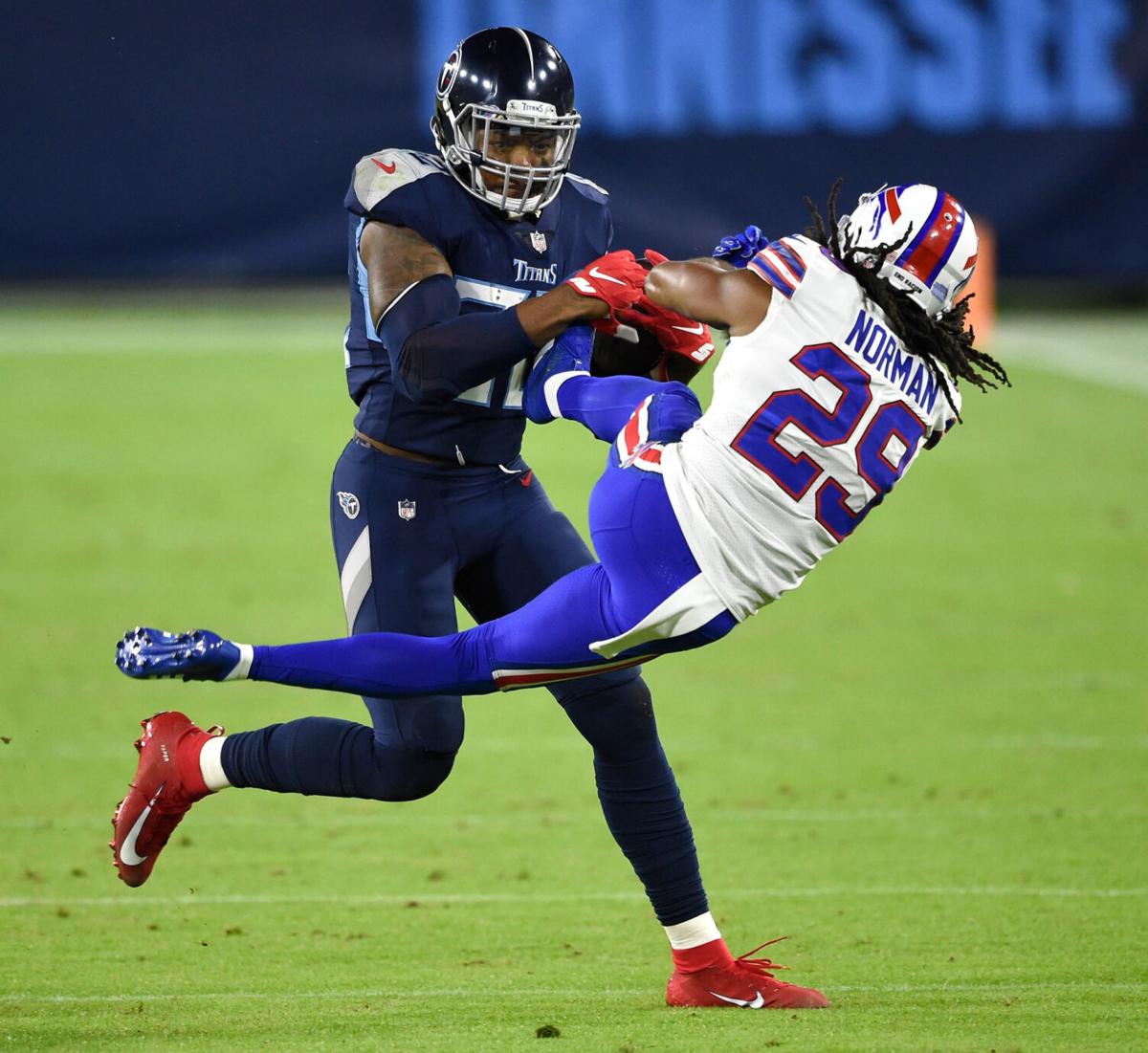 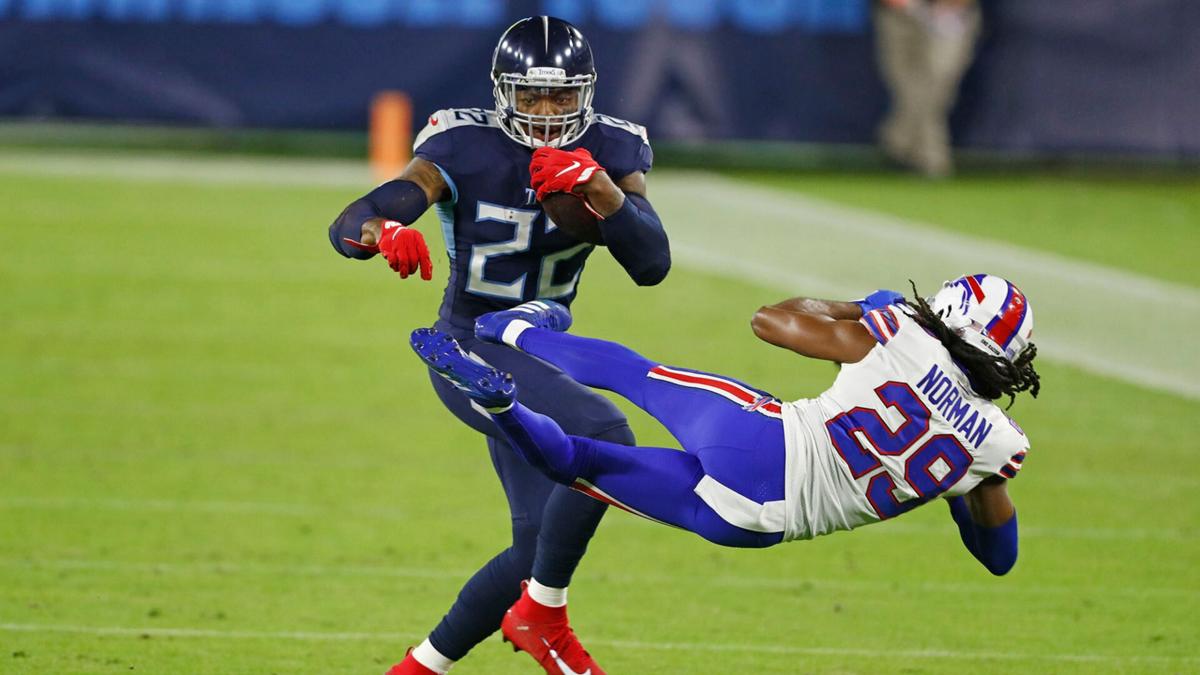 Oct 13, 2020; Nashville, Tennessee, USA; Buffalo Bills running back Devin Singletary (26) is tackled after a short gain during the first half against the Tennessee Titans at Nissan Stadium. Mandatory Credit: Christopher Hanewinckel-USA TODAY Sports

NASHVILLE, TN — The Bills put forth a dismal effort on national TV, falling to the Tennessee Titans, 42-16 after Buffalo’s worst performance of the season. Ugly, undisciplined play on both sides of the ball led to the Bills’ demise, which came at the hands of what proved to be a team that is a class above Buffalo.

Here are a few takeaways from the Bills’ Week 5 loss to the Titans:

The Bills’ first turnover of the game came on their first drive, when Andre Roberts, who was filling in for injured WR John Brown, let a third-down pass go off his hands and into the hands of a Titans’ defender. The interception wasn’t Josh Allen’s fault, nor was his first of the season, against the Rams, which came on a heavily disputed call. His third pick of the season and his second of the game against the Titans was his fault, though, as Allen tried to force a pass to Gabriel Davis near the sideline before Titans’ cornerback Malcolm Butler cut underneath and snagged a leaping interception. Butler would record a long return inside the red zone, which led to a Tennessee touchdown.

If it weren’t for the two turnovers, and a terrible day in terms of penalties (Bills had 10 for 56 yards), the Bills could have very well had a better fate against the Titans. Buffalo was solid on third down (13-of-17), which led to several long, methodical drives, and they only punted twice.

The Bills’ offense was clicking for much of the game, and if it weren’t for the number of mistakes that continuously set them back, this one could have looked a lot different for Buffalo.

Another big mistake by the Bills was Tennessee’s 40-yard punt return from the Titans’ Kalif Raymond in the first half. That return set up a short field, which led to a Derrick Henry rushing touchdown, his first of two on the night. The Titans converted on two short fields in the first half, the other gifted to them after Butler’s interception return.

The Bills shot themselves in the foot time and again, and for the first time this year, they suffered the consequences of their mistakes with a big fat L.

The absence of Tre’ Davious White was felt early and often, as the Bills struggled to contain the Titans’ short-to-intermediate passing game, namely No. 1 receiver A.J. Brown. Brown abused Bills cornerback Josh Norman throughout the game, which led to numerous pass interference calls on Norman. Norman was filling a spot that would usually be filled by White, as in the past, White has been given the assignment of following an opposing team’s best receiver. It appeared that’s what Norman was tasked with at times against Tennessee, but he was unable to slow Brown, who finished the seven receptions for 82 yards and a touchdown.

Bills’ nickel corner Taron Johnson, who has been under fire for his subpar performance this season, put forth another dismal effort and, at times, looked out of sorts against Tennessee. Johnson was burned late in the first half for a big Titans’ first down, which came on a 3rd and 19, which was the low light of a long night for the 24-year old. The long third-down conversion eventually led to a Titans’ touchdown.

As a whole the Bills’ defense struggled. It allowed Ryan Tannehill to pick them apart to the tune of 21-of-28 passing for 195 yards and three touchdowns, while Derrick Henry (19 carries, 57 yards, two touchdowns) recorded timely runs that extended numerous drives that finished with points. The Titans’ offense has been good through four weeks, but against the Bills- once-vaunted defense, Tennessee put forth one of its best performances of the season.

We got the full Dawson Knox experience on Tuesday night, as the Bills tight end recorded another discouraging performance. Early in the first quarter, on the Bills’ second drive of the game, Knox miscommunicated with Allen on a third-down play, and later Knox dropped a pass on a first down play during the second quarter. Just before the dropped pass, Knox was able to throw another of his signature stiff arms that led to a 15-yard gain, but Knox didn’t do enough on Tuesday to inspire confidence from Bills fans.

Two weeks ago, against the Los Angeles Rams, in Knox’s absence Tyler Kroft recorded a couple of touchdown catches and put forth a solid effort that amounted to four catches for 24 yards. Kroft doesn’t seem to have the issues with dropped passes that Knox has exhibited through the first 19 games of his career, and Kroft has been productive when he has seen the field during his time with Bills. It won’t be long before Knox loses his status as the team’s surefire starting tight end, and Kroft begins to eat into his playing time - especially if Knox has more performances like he had tonight.

A NIGHT TO FORGET FOR ROBERTS

Boy, was it a bad night for Bills’ receiver/kick returner Andre Roberts. Not typically a player who runs a ton of routes on offense, Roberts was in on the Bills’ first third-down opportunity of the game, and Buffalo went to him. Roberts was unable to make the play, and worse, let the ball bounce off his hands and into the grasp of a waiting Titans’ defender. Later, Roberts compounded his forgettable night with a fumble on a kickoff return during the fourth quarter.

After this loss, plenty of pundits will be questioning the legitimacy of the Bills’ 4-0 start. Many will wonder if the 4-1 Bills are pretenders rather than contenders, which they appeared to be through the first four weeks of the season.

Despite the injuries, despite the extraneous factors, this was a bad loss for the Bills. They looked like a JV team at times and made mistakes a true championship contender, let alone a playoff contender, simply does not make.

The dropped passes, the mindless penalties, the lack of awareness on defense and the sporadic nature of the offense, what we saw from the Bills on Tuesday was far from what we saw the first four weeks of the season. Buffalo’s effort against Tennessee will undoubtedly cause many to jump ship and begin to view this team as the ‘same old Bills’.

The beauty of sports is that these teams get the chance to line up again next week and will have another opportunity to prove themselves. It won’t be easy for the Bills in Week 6, as Buffalo now must prepare to take on the defending Super Bowl Champion Kansas City Chiefs. But if the Bills can piece themselves back together and put forth a solid effort against the Chiefs, or perhaps even win that game, they can reverse the harsh criticisms that are sure to be lobbed at them after their first loss of the season.

The Bills deserve to be crushed after the disgusting performance they put forth on Tuesday night, but 4-1 is still 4-1, and the Bills will have a chance next week to put this game behind them and continue their trek toward a consecutive postseason berth for the first time in two decades.