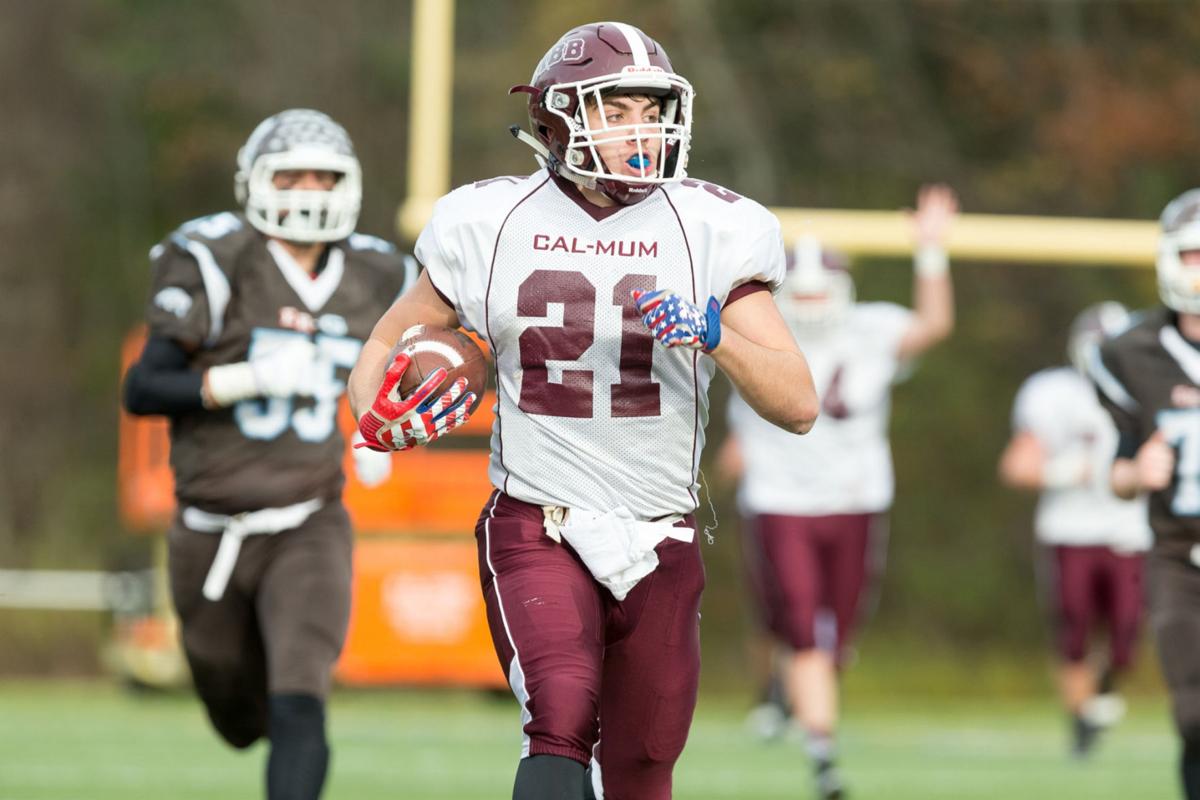 File PhotoCal-Mum/Byron-Bergen senior Bryce Yockel became the Red Raiders’ all-time leading rusher this season. He will attend Division III’s Baldwin Wallace this fall. He led Cal-Mum/BB to a sectional title in 2017, in just their second season with the merge. 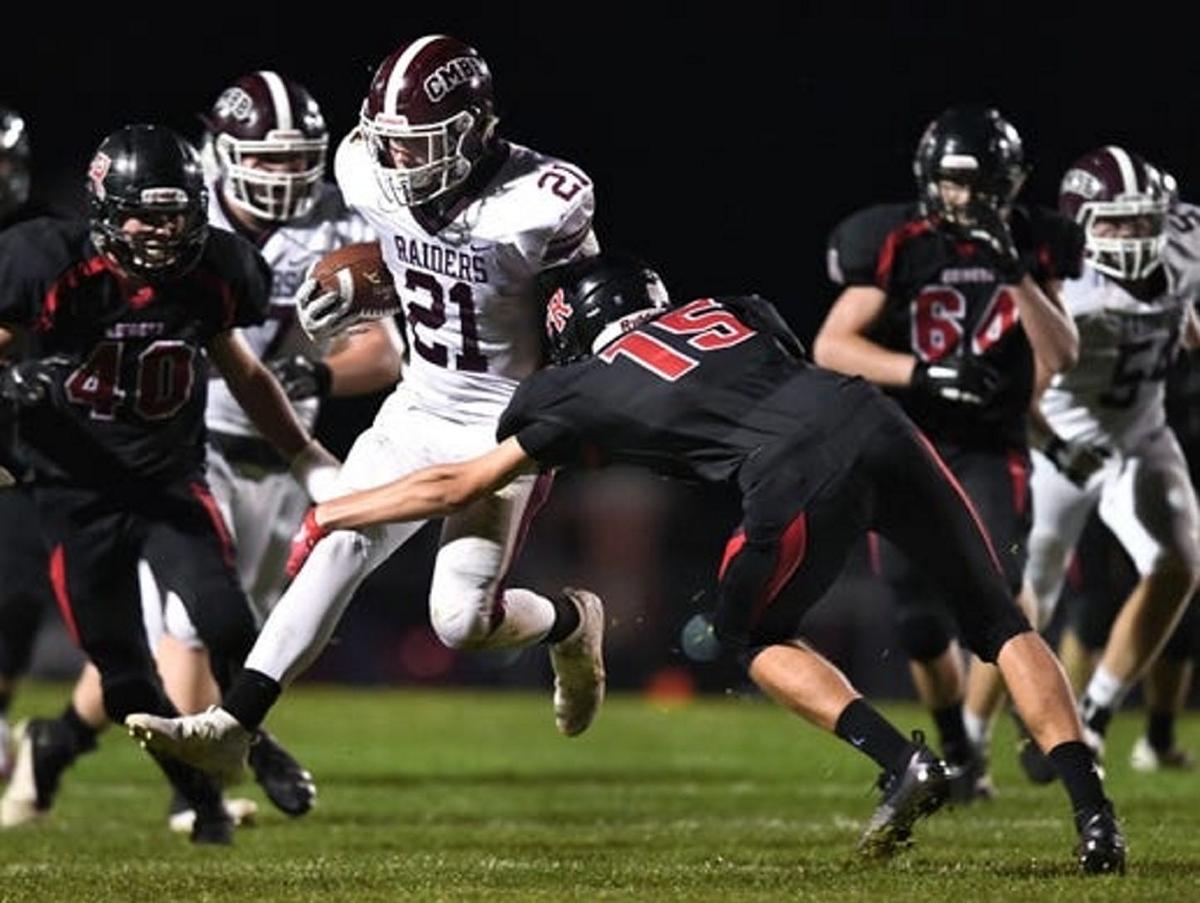 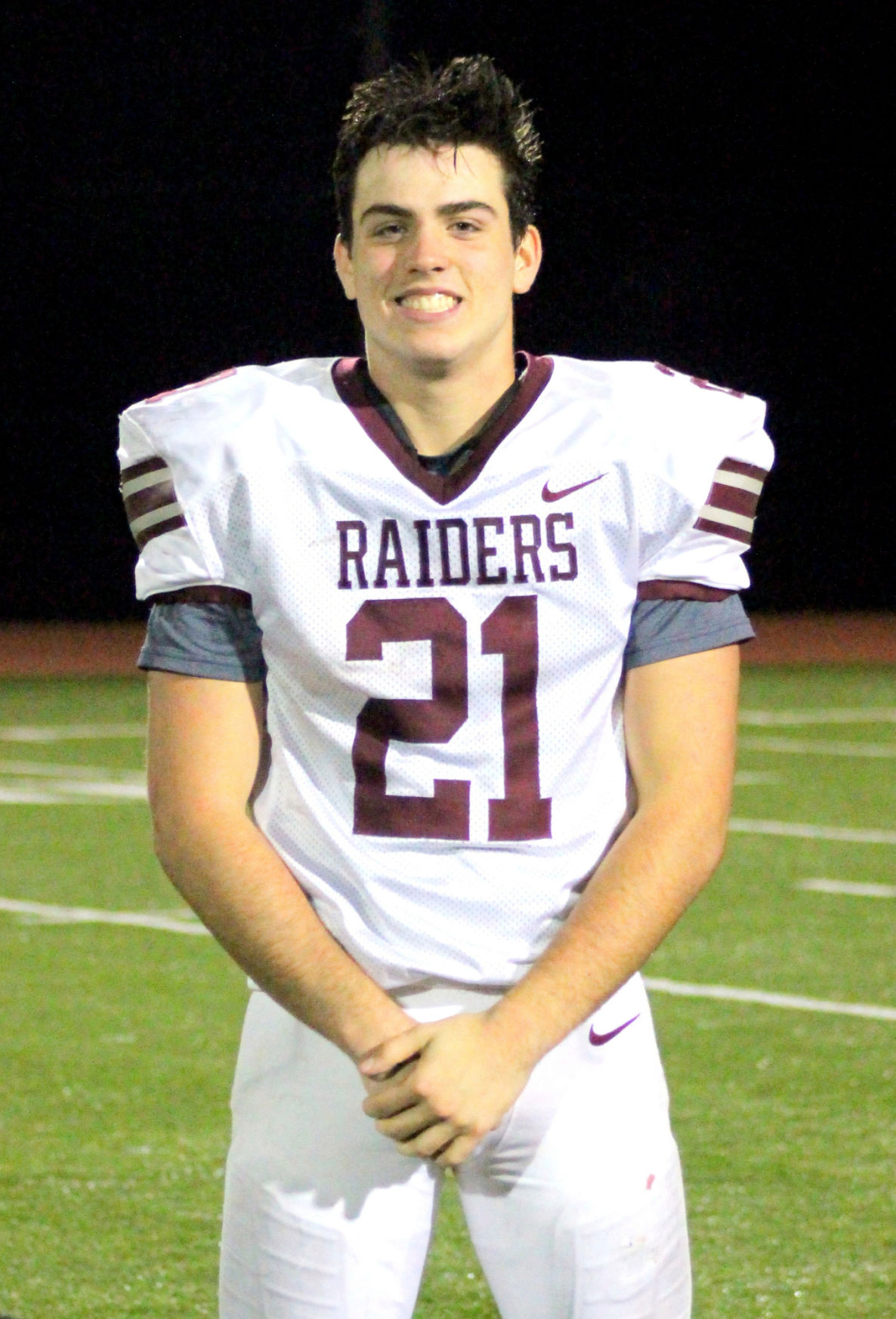 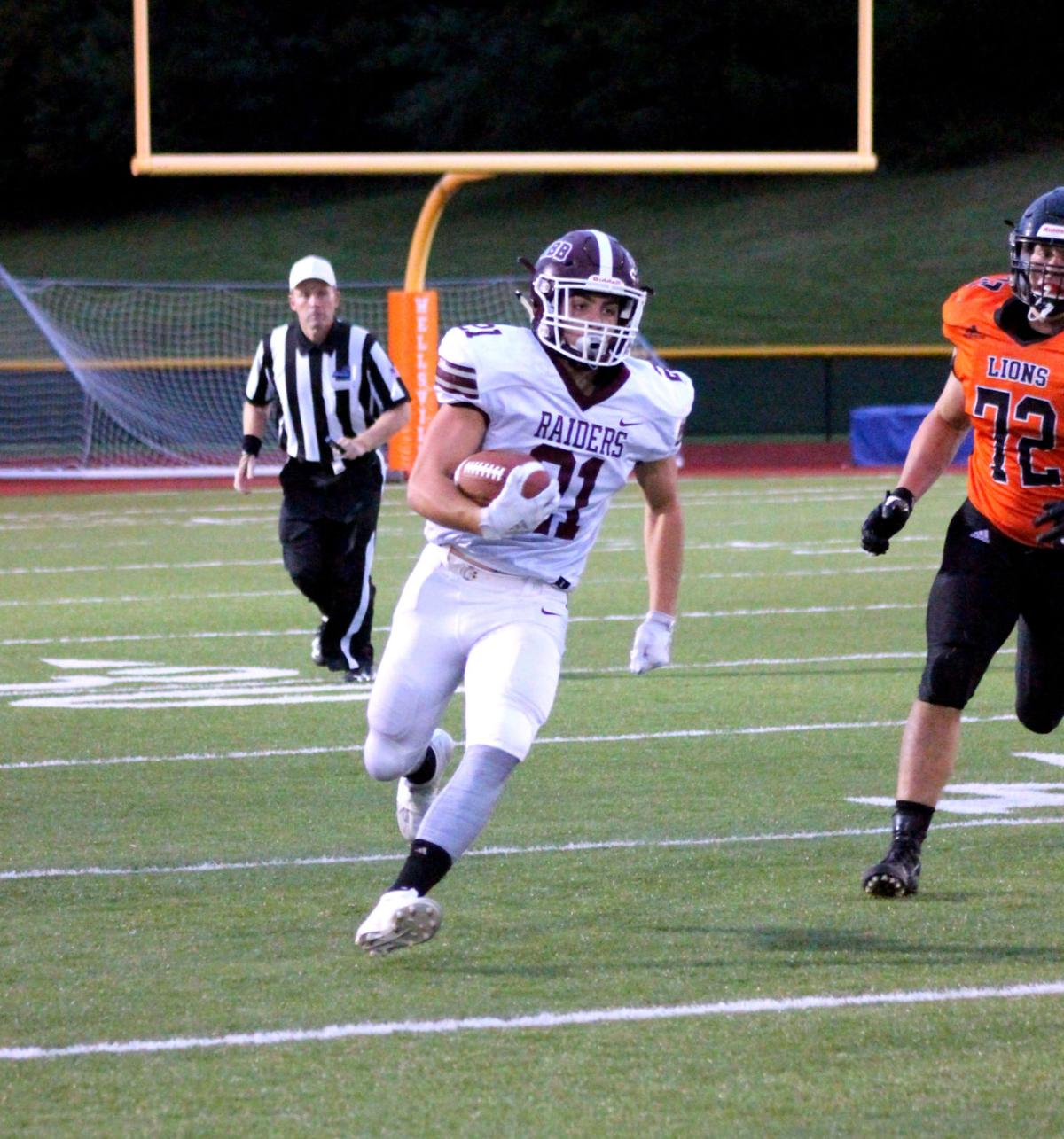 Photo by Cindy Cassada Cal-Mum/Byron-Bergen's Bryce Yockel helped the Red Raiders to the 2017 sectional title, in just their second year of merging. 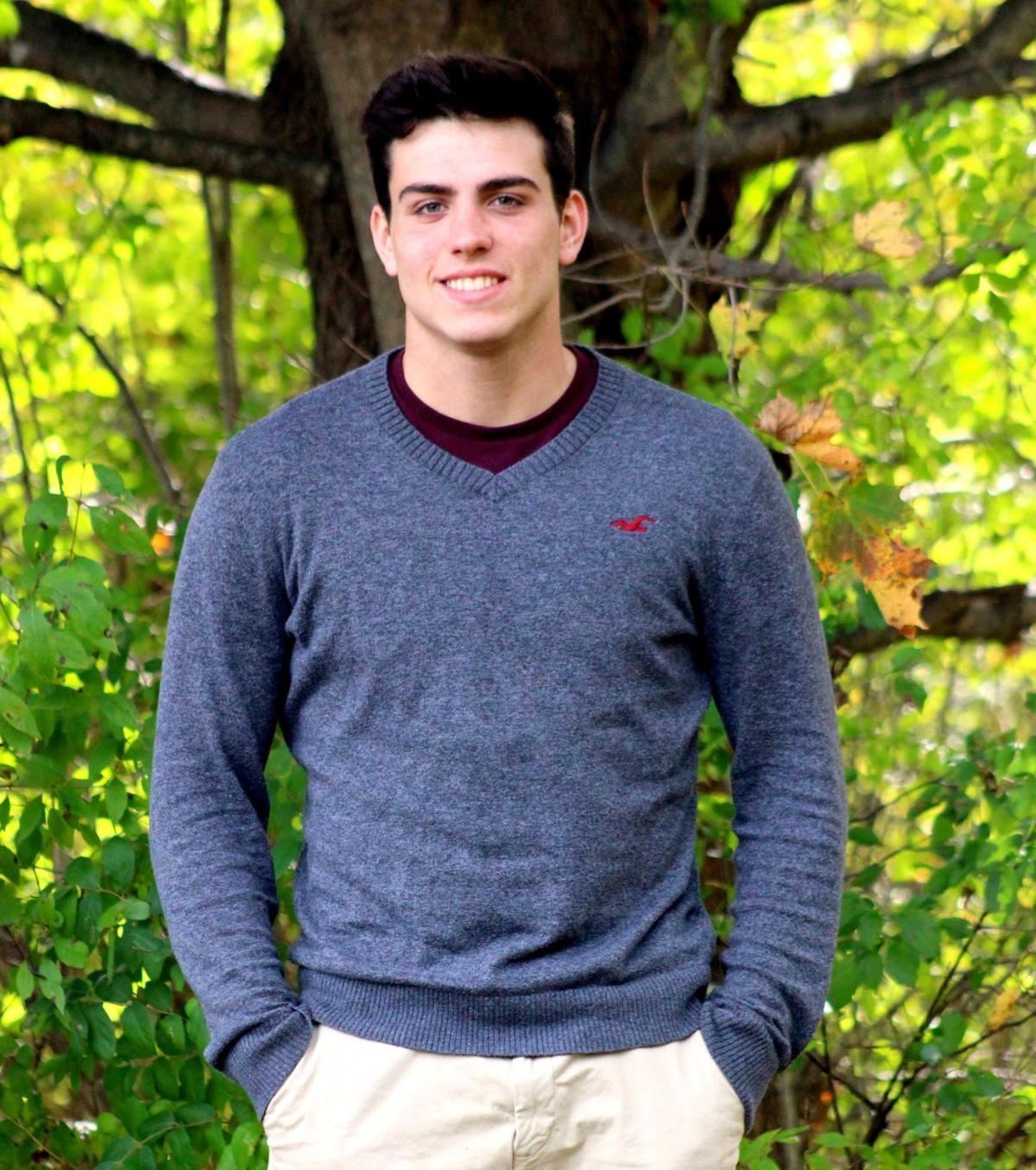 Photo by Cindy CassadaByron-Bergen’s Bryce Yockel was a three-sport standout in football, basketball and track.

File PhotoCal-Mum/Byron-Bergen senior Bryce Yockel became the Red Raiders’ all-time leading rusher this season. He will attend Division III’s Baldwin Wallace this fall. He led Cal-Mum/BB to a sectional title in 2017, in just their second season with the merge.

Photo by Cindy Cassada Cal-Mum/Byron-Bergen's Bryce Yockel helped the Red Raiders to the 2017 sectional title, in just their second year of merging.

Photo by Cindy CassadaByron-Bergen’s Bryce Yockel was a three-sport standout in football, basketball and track.

BERGEN — For a number of reasons, Bryce Yockel has been the face of Caledonia-Mumford/Byron-Bergen football.

When longtime small-school power Cal-Mum made the decision to merge with Byron-Bergen in 2015 because of decreasing numbers, no one really knew what was to become of one of the greatest programs in Section V history. Yet starting with the 2016 season, in came a talented freshman class, led by the outstanding running back.

Just one year later, led by a talented group of seniors and Yockel in the backfield, the Red Raiders were back on top, winning the Section V Class C block in just their second season as a merged team. And for Yockel, the rest — as they say — is history.

“It was great, it was my family away from home,” Yockel said of playing for the new version of the storied Cal-Mum football team. “I made so many memories and new friends because of the merger, the sectional title was the cherry on top.”

Years later, Yockel would cement his name in Cal-Mum lore when he became the program’s all-time leading rusher when he ran for 276 yards on 34 carries in a win over Avon in mid-October of his senior season to pass the great Wade Rowcliffe’s (1992-94) previous record of 4,262 yards.

“Bryce’s career numbers are truly remarkable,” Cal-Mum/B-B head coach Billy Donegan said. “As a result he has compiled quite a list of well deserved accolades over the years. But, what is most impressive about Bryce’s career is the impact he’s had on his coaches and teammates. He always treated others with kindness and respect. He made people feel valued. As our captain, he ‘walked the walk’ and led by example. Bryce raised the bar on just about every expectation we place upon our young people today.”

Now, the talented running back will be moving on to the next level as he has committed to play football next season at Baldwin Wallace University in Ohio, a strong Division III program that competes in the Ohio Athletic Conference and has long rivalries with John Carroll University and D-III powerhouse Mount Union.

And Yockel had plenty of offers, including Mount Union, Gannon and St. John Fisher but his choice was pretty easy.

“I chose BW because I like the college and I felt it was a good fit for me and it was also very affordable,” he said.

Yet before that, it was all about that stellar, and sometimes overlooked, high school career.

With three 1,000-yard seasons in four years, Yockel certainly cemented himself as the top running back in the Livingston Conference year after year. A multi-time LCAA and GR all-star, it’s easy to think that setting the prolific program rushing record was always in the cards.

“Honestly it wasn’t. My mind was set on winning another title and that was the team’s goal as well,” Yockel said. “I feel honored to have my name at the top with the greats of the program, I know they worked hard for it so that makes me feel like my hard work paid off.”

And it will always be the memories of those four years that will stick with him, even though the Red Raiders couldn’t match that 2017 title in his final two campaigns.

Just five days before Cal-Mum/BB won the Class C title in his sophomore year — with a team that came from the No. 6 seed in the Class C bracket and upended powerhouse ER/Gananda in the final — the Red Raiders’ starting quarterback, AJ Maye, lived through his sister passing away in a tragic car accident on I-390.

The senior QB went on to have a huge game in the title matchup, as did Yockel, and that ride is something that a young Yockel will never forget.

“It felt great. We knew that a loss in the family can be rough to get through and I’m glad that we lifted him up as a family and succeeded for him,” Yockel said of Maye. “That win made the situation a little less stressful for him because he always had his football family.”

Yockel, though, is not just football.

He is also a strong basketball player and a stellar track and field athlete that was looking to make a push at at least one sectional title this spring.

But like everyone else in this situation, that opportunity was taken away from him because of COVID-19. However, it hasn’t been the downer for him as it has for a lot of other athletes, as football is his main love.

“Honestly it hurt a little bit, but I felt it was more motivation to grind for the upcoming football season,” Yockel said.

Yockel will be joining a Baldwin Wallace team that finished a solid 7-3 last season, with its only setbacks coming to the aforementioned Mount Union and John Carroll, as well as a close one to Ohio Northern.

And though he is a hard-worker and one that leads by example, Yockel knows that making the adjustment to the next level — especially high-level Division III — will not be an easy one to make.

“There are some talented teams in Ohio so it will be rough at first to excel but I will find a way to build the strength and speed to do so,” he said.

Though for now Yockel is still a high school senior, grappling with the reality that the second half of his final high school year has been taken away.

“The last couple of months have been upsetting because it’s my last year of high school, but the support system I have has made the situation less stressful,” he said.

Now it’s time to take the next step and for an athlete that has made his mark for four years, he’s more than ready to do it again.