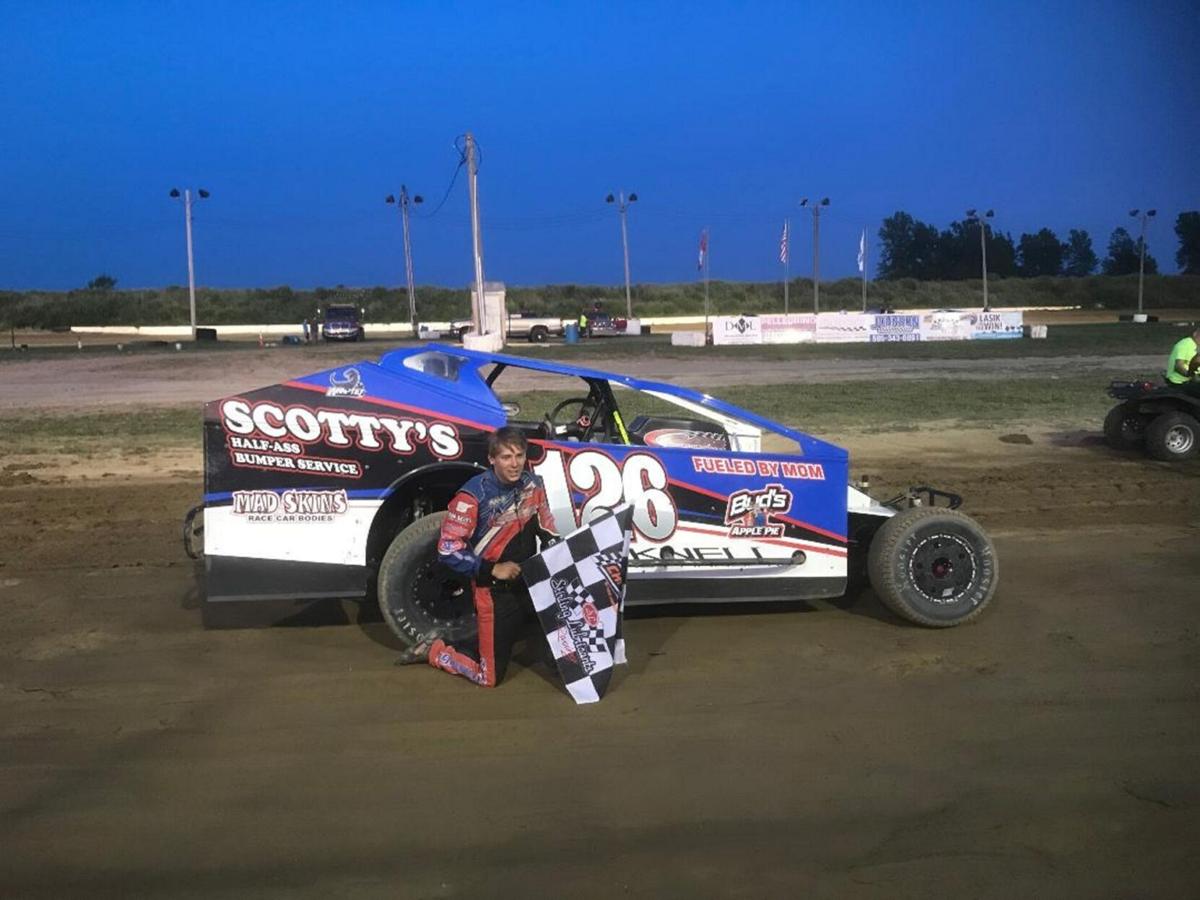 Genesee Speedway Zach George was all smiles in Victory Lane after charging to the lead and scoring his first Sportsman Feature win at Genesee on Saturday Night. 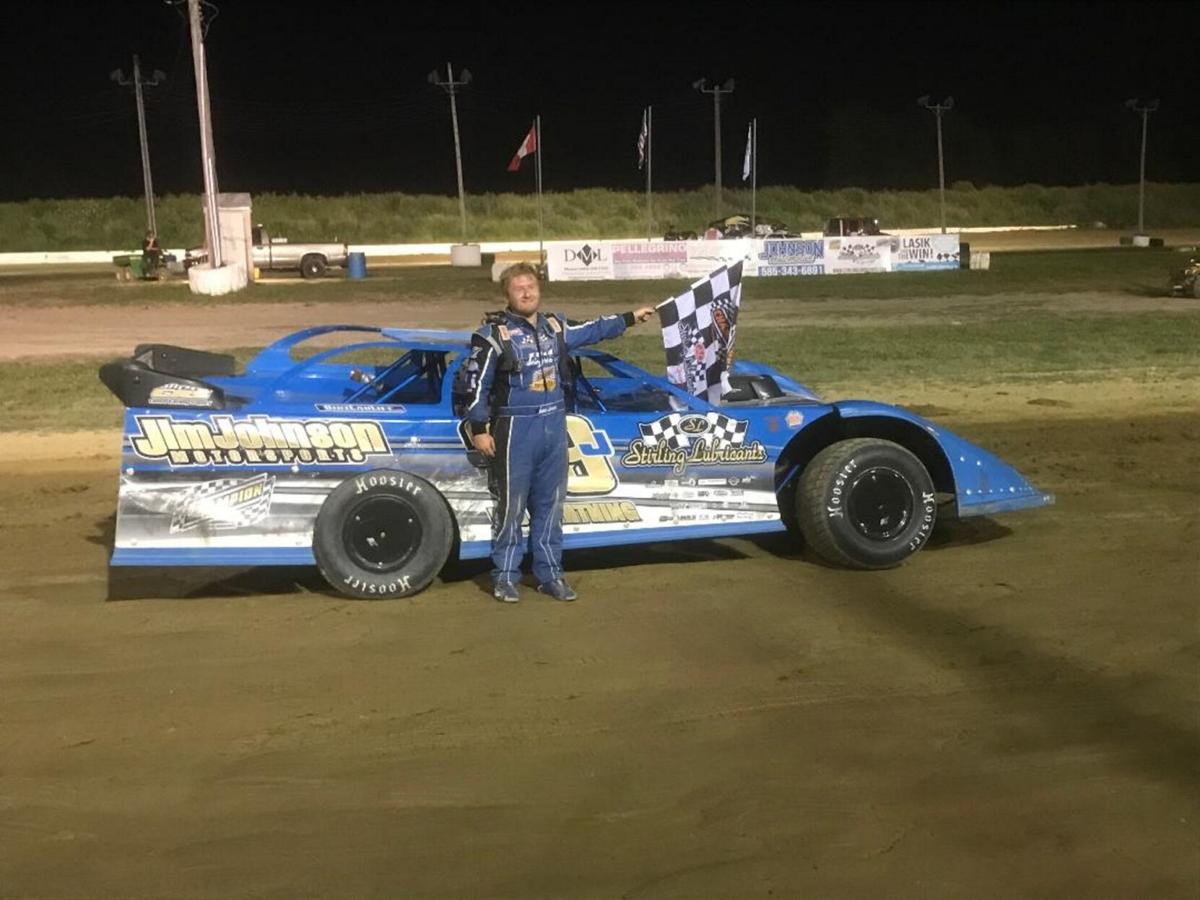 Genesee Speedway Zach George was all smiles in Victory Lane after charging to the lead and scoring his first Sportsman Feature win at Genesee on Saturday Night.

BATAVIA — On a night when four of the five winners on opening night in June would go back to Victory Lane, the story was made by the one driver that scored his first win in thrilling fashion.

Sometimes first-time winners get a victory by running on a track where passing is at a premium or all of the best cars got taken out; but on Saturday night, Zach George got his first win at Genesee by having the dominant Sportsman car and made the right moves at the right time to get by some veterans and hold off others to end up in Victory Lane.

“This is the most amazing feeling I’ve ever had,” declared George after jumping out of his No. 126 on the frontstretch. “We just have not had anything go our way and tonight we had a really good car and we made the most of it.”

George, of Wilson, started on the pole but quickly slipped back to second as Dave Conant took the lead from the outside line. Conant had a strong car, but as the race wore on, “The Flying Sack” began to gain ground by hitting his marks on the bottom of the track. With eight laps to go he pulled even of the No. 44 but it took three laps to finally put his No. 126 in front of the pack.

After crossing underneath Johnny Veach’s white flag it looked like George had the win in hand but a car spinning in turns three and four created a one-lap sprint to the finish. The caution also created some hectic moments inside the cockpit of the No. 126.

“I actually asked God for help for that restart,” admitted George afterwards. “I told him to show me the way. I tried to run the middle as much going in to (turn) one so nobody could get a clean run under me or around me and just let God take me home.”

George’s win was his first after four years of running weekly in Batavia. He was glad to finally have a strong starting position to match his strong racecar and then capitalize on the opportunity.

Conant was able to finish in second for his best finish of the year. Point leader Kyle Inman quickly drove up to third place and appeared, at times, to be poised to make a bid for second and perhaps the lead but could not move by George or Conant and would settle for the third spot. Jonathan Reid used the final lap restart to drive up to fourth while Cam Tuttle had another solid run to finish in fifth.

The RUSH Late Models rounded out the night with some hard-fought battling on a track that was still in immaculate condition. While restarts are always critical, Jimmy Johnson showed that having the best car on the long run is really where the race is won.

Johnson, of Oakfield, made a slick move to drive around the outside of polesitter Doug Ricotta on lap six to take the lead and then hold off the advances of Billy Holmes over the second half of the race while the event ran caution-free for the final 21 circuits.

Ricotta was strong on all three starts from the bottom line, pulling in front of the No. 39J. A lap after getting back in front on the lap 5 restart though, Johnson put his potent ride to the top of the track and narrowly pinched himself between the No. 01 and the wall. The maneuver would pay off and put “Kid Lightning” out in front for good.

“My car was bogging down on restarts again tonight but once I got going this car likes to run right through the black (center of the track) and it worked great again tonight,”

A lap after Johnson took the lead from Ricotta, Bill Holmes also moved by the polesitter to get up to second. Holmes had started in ninth and was clearly on a mission as it appeared he had the quickest car.

“When I saw Bill behind me on (the scoreboard), I knew he was outside the redraw so I figured he had a really good car or something,” recalled Johnson, who won for on Saturday for the third time without fans this season. “I just tried to hit my marks and she’s working really good right now.”

Things got interesting late in the race as some lapped traffic forced Johnson and Holmes to take evasive maneuvers. The gap got cut down from two seconds to under one second but when Holmes’ No. 65 hit the same traffic, Johnson was clear to run off while Holmes would settle for a fine second place showing for the second time this year.

JJ Mazur had another steady race, crossing in third for his fifth top five in as many races this season. Ricotta would finish in fourth for another solid finish while Greg Mrzywka scored a season-best showing by rounding out the top five.

John Zimmerman returned to Victory Lane for the second time in 2020 in the Street Stock Feature, making a pass on Bill Taylor on lap 10 after stalking him since the drop of the green flag. Zimmerman, who won on opening night, destroyed that engine the following week and missed a race before returning last week with last year’s engine to finish in second. On Saturday, Zimmerman was able to run a comfortable line on the track and pull away from Bill Taylor down the stretch, as Taylor held on for his third runner-up finish in five races this season. Pat Powers would finish in third while Jesse Qutermous and Dennis Cummings rounded out the top five.

In a wild, caution-free feature, Dante Mancuso ran down Rich Conte with four laps remaining to take the lead and drive off to win his second feature of the year. The former division champion from Batavia started back in ninth but made short work driving in to the top five. Ashley Harbison led until lap seven when Conte drove on by, two laps later Mancuso was up to second and chasing after the leader. Mancuso then drove under the No. 717 for the lead and picked up the win in under six minutes. Conte would cross in second with Brandon Shepard running a steady race to finish in third. Defending Track Co-Champions Ashley Harbison and Cole Susice rounded out the top five.

Brandon Close thought he had given away his chance at his first win in the Novice Sportsman on a lap 7 restart when he chose the bottom line and gave up the lead to Dylan Duhow; in a mad scramble to the finish though he would regain the top spot and refuse to let it go. Close became the fourth different winner in as many races for the novice division when he moved by point leader Dylan Duhow, who slipped over the banking in turn one on lap 12 to hand the lead back to the No. 79. Brian Monahan had taken what appeared to be the lead on a lap 10 restart but would be docked two spots for jumping a position on the restart. A caution flag a lap before the finish would allow Close to lead the field back to the one-lap sprint which was an adventure in itself when the field did not realize they were coming back to green. As Close drove to the win, Andrew Joy was able to run strong in second while Scott Wolfe charged up to complete the podium positions.

Bandit Division point leader Jake Bansmer got back to his winning ways on Saturday leading wire-to-wire to win for the fourth time in five races in 2020. Bansmer, of East Aurora, saw last week’s winner Brian Gregory win the heat then stalk his No. 71 on the opening circuits for the lead, but as the race went on without issue, Bansmer was able to pull away for a comfortable victory. Gregory would hold on for second while Tyler Guzzardi crossed in third.

It was a beautiful night for racing with some incredible action on the track. The show moved along quickly. However, this was all bittersweet with the absence of spectators due to the Governor’s dictation. The next event is currently unknown but all events for July have been cancelled. For more information, visit www.Genesee-Speedway.com.