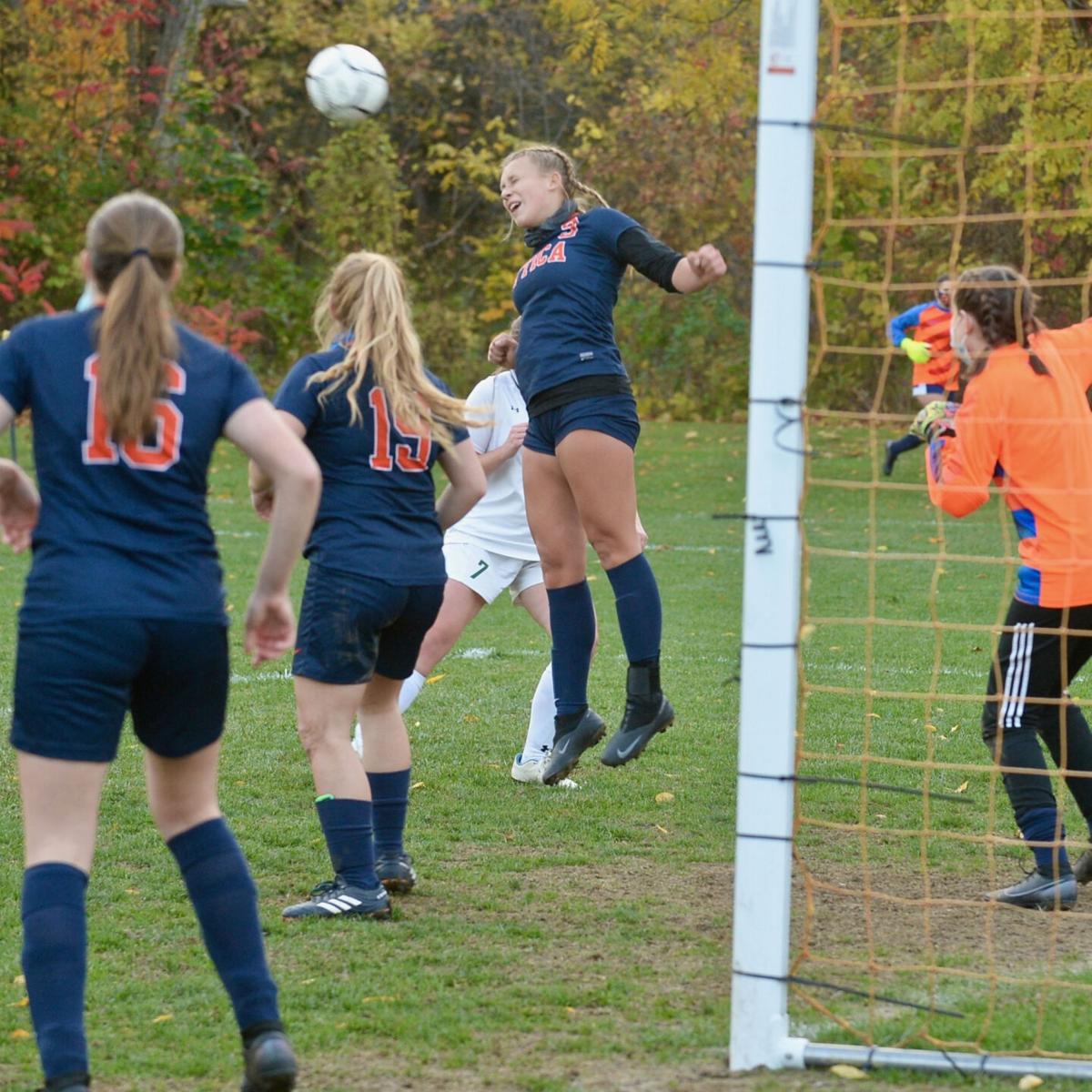 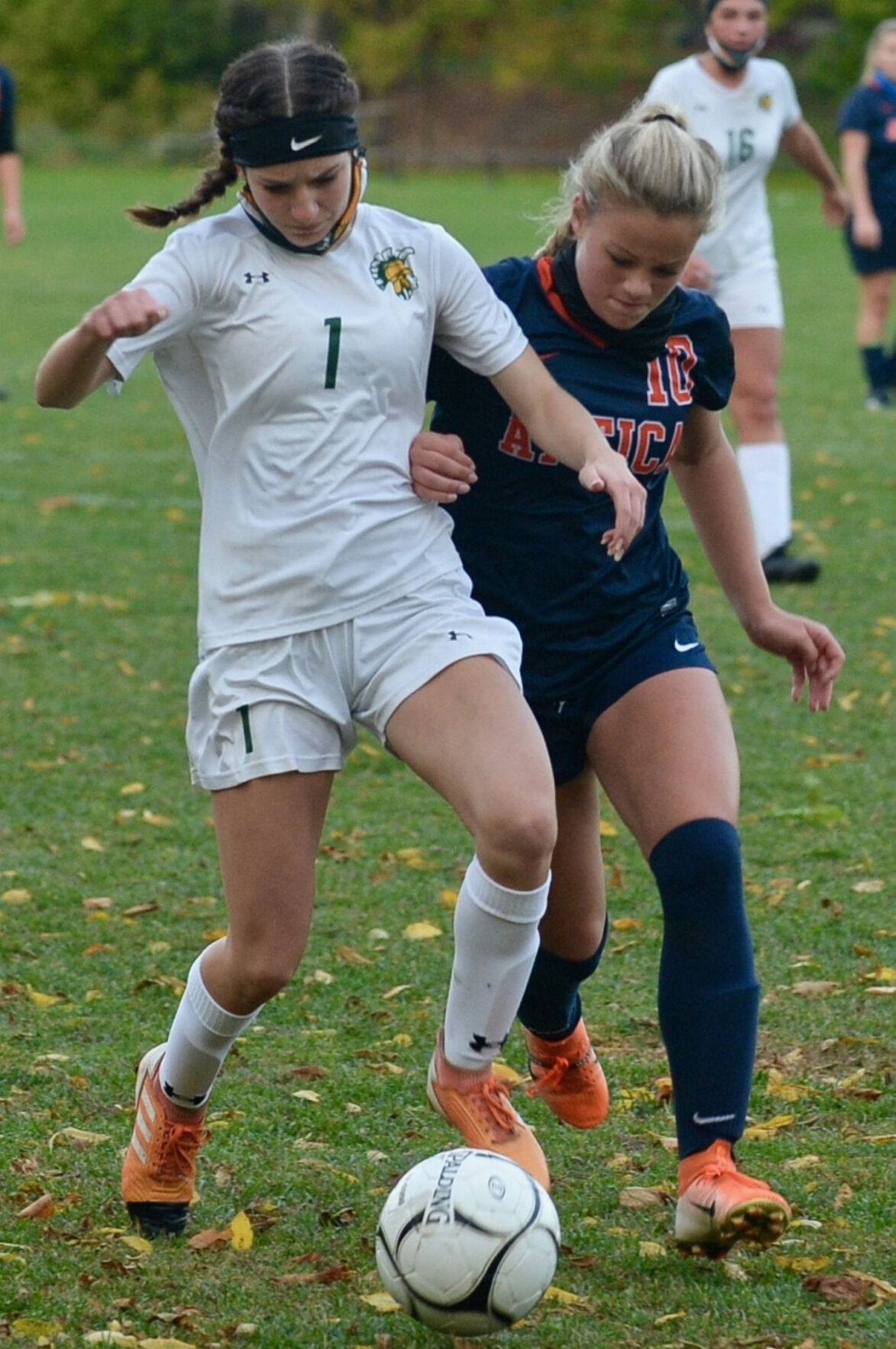 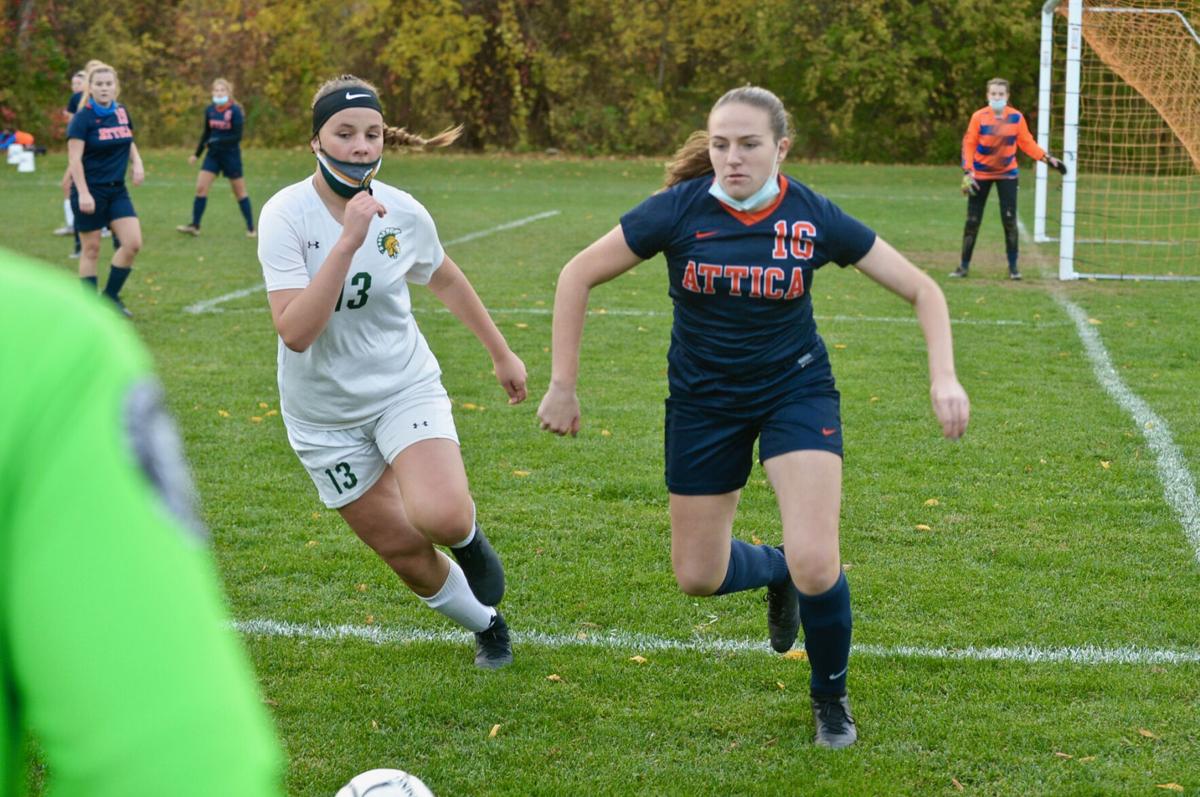 Alex Brasky/Batavia Daily NewsMadison Fuller (Alexander) and Kaylie Bugajski (Attica) chase the ball down before it goes out of bounds. 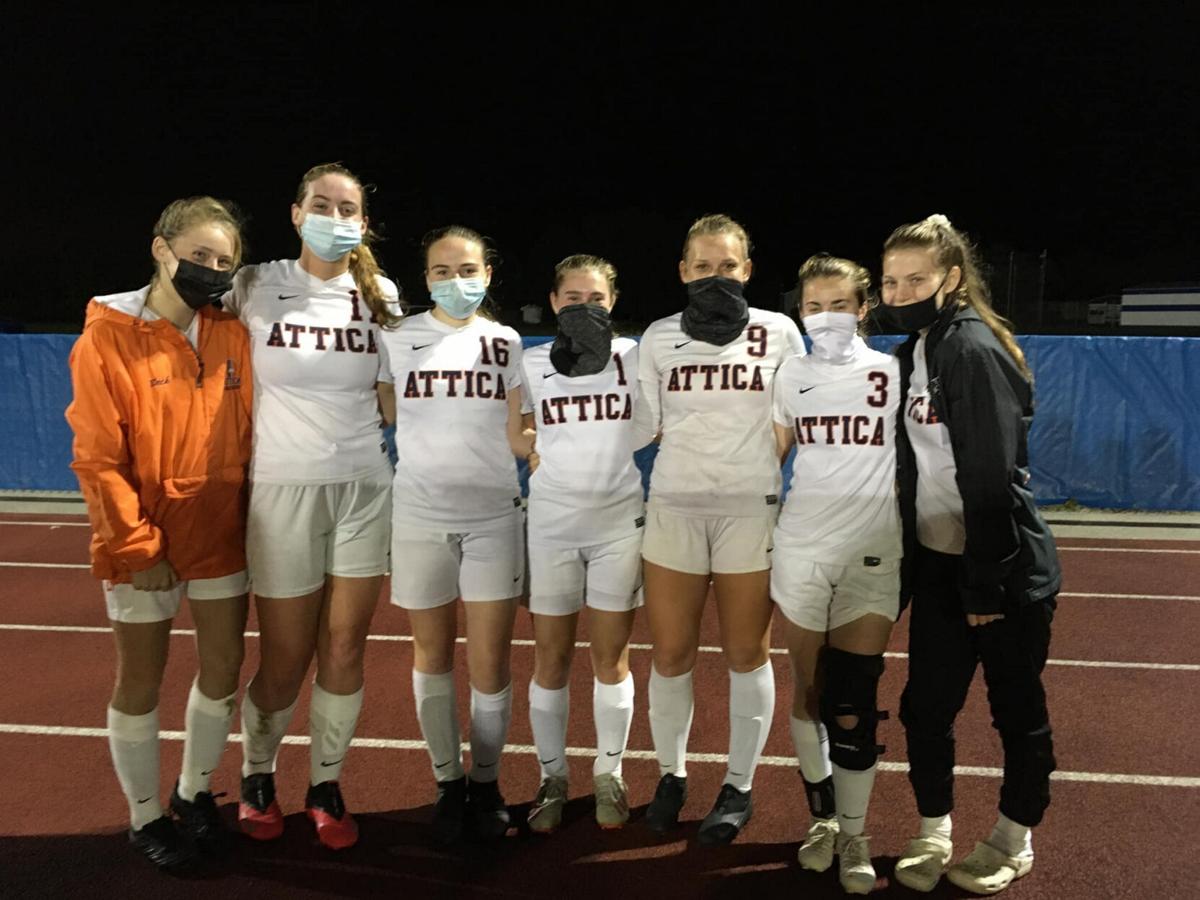 Alex Brasky/Batavia Daily NewsMadison Fuller (Alexander) and Kaylie Bugajski (Attica) chase the ball down before it goes out of bounds.

ATTICA — When your first victory of the season comes against your next door rivals, that victory becomes much sweeter.

Cassidy Strzelec will agree with that.

The junior captain scored two goals while teammate MacKenzie McLeod added one goal as Attica (1-3) captured their first ‘W’ of the season with the 3-2 victory over Alexander Tuesday in Genesee Region action.

Strzelec scored both her goals in the first half as the Lady Blue Devils took the lead at the intermission.

McLeod, only a freshman and another team captain for the youthful Lady Devils, added her score in the second half.

Alexander’s Carly Burgess scored for the Lady Trojans, who slipped to 2-2 on the season.

All three goalies who played in this one were busy.

Attica’s Rily Rzepka (24 saves) and Alanna Pellicane (5 saves) combined for nearly 30 stops while Alexander’s Sam Kabel made 18 saves of her own.

Host Oakfield-Alabama/Elba picked up the big victory over previously unbeaten Wheatland-Chili Tuesday night thanks to a huge goal with less than a minute remaining from Macy Altamirano.

The Wildcats got on the board first at the 17 minute mark of the second half to put OA/E in a 1-0 deficit.

But OA/E would tie the game soon after when Altamirano scored on a far post header assisted by Kelsey Schlagenhauf with eight minutes left.

Altamirano would give her team the victory when she scored with just 38 seconds left in regulation off an assist from Dakota Brinkman.

Brynn Walczak made 11 saves for OA/E.

Visiting Notre Dame got two goals and one assist from Arabella Rogers as they doubled up Lyndonville in GR action Tuesday.

Autumn Mathisen opened the scoring for ND with a goal off a Rogers feed at the 14-minute mark.

Maylee Green added a goal off a direct kick with eight minutes left in the half.

Rogers would score her first goal with just four minutes left until intermission and then added her second tally early in the second half.

Autumn Mathisen and Emma Sission added assists while keeper Rebeka Nickerson made seven saves for the Lady Irish (2-2), who will host Attica Thursday.

Magdalena Aguirre and Megan Gates scored goals as Kendall picked up their first win of the season as they blanked Pembroke.

Aguirre scored with six minutes left in the first half to break the ice off an assist from Brianna Wakefield to make it 1-0.

Gates added an insurance goal late in the game off a feed from Madison Jacob.

“Abbigail Duttweiler had an amazing athletic performance as captain and centerback, aiding to cover, pressure and release the ball defensively,” Pembroke coach April Meier. “Other notable performances by the back line were made by Madilyn Godzala (center back), and outside backs Rebecca Cox and Bobbi Ann Neureuter.”

Host Holley improved to 3-1 on the season with the quality victory over B-B in GR action Tuesday.

Halee Passarell scored the lone first half goal as the Lady Haeks led 1-0 at the intermission.

Samantha Bates and Tatum Gagne added insurance goals in the second half.

Passarell and Bates had assists in the second half.

Maria Karipidis scored off an assist from Izabela Woloszuk at the seven minute mark of the second half as host HF-L edged Batavia Monday in Monroe County action.

Batavia keeper Maddie Barone was magnificent in the cage with 12 stops.