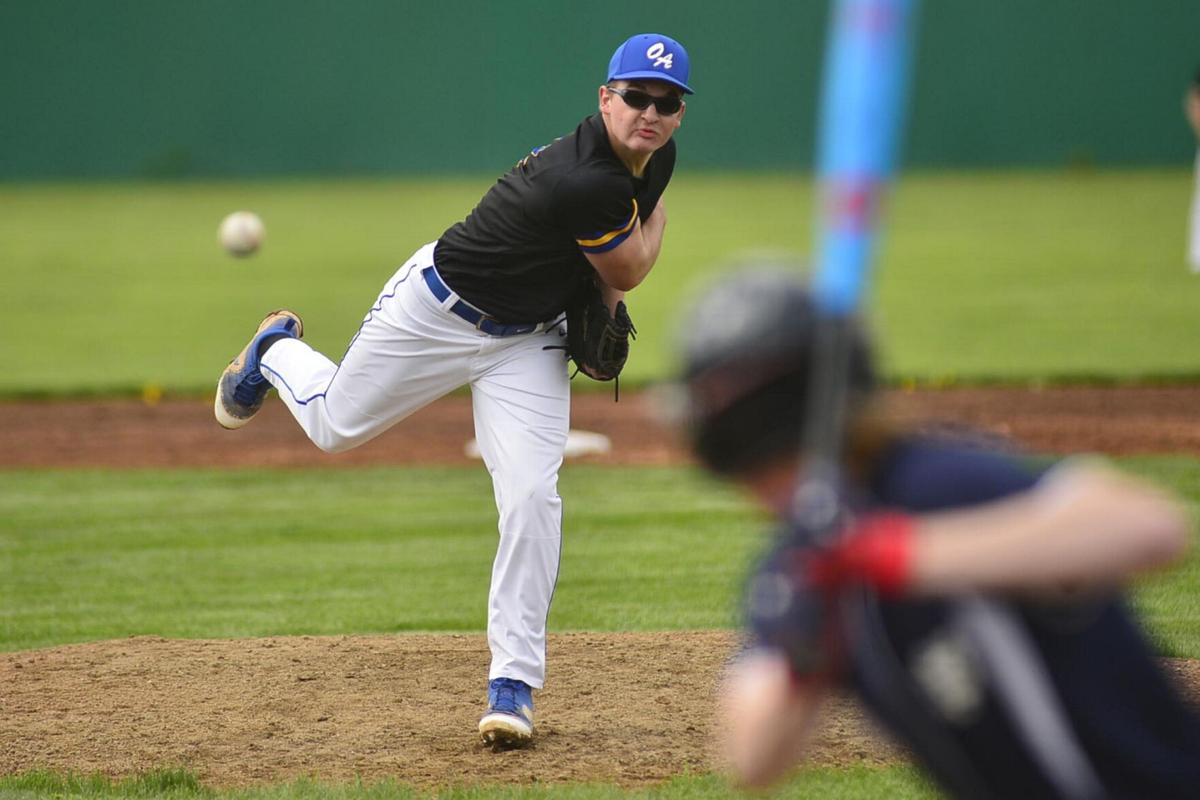 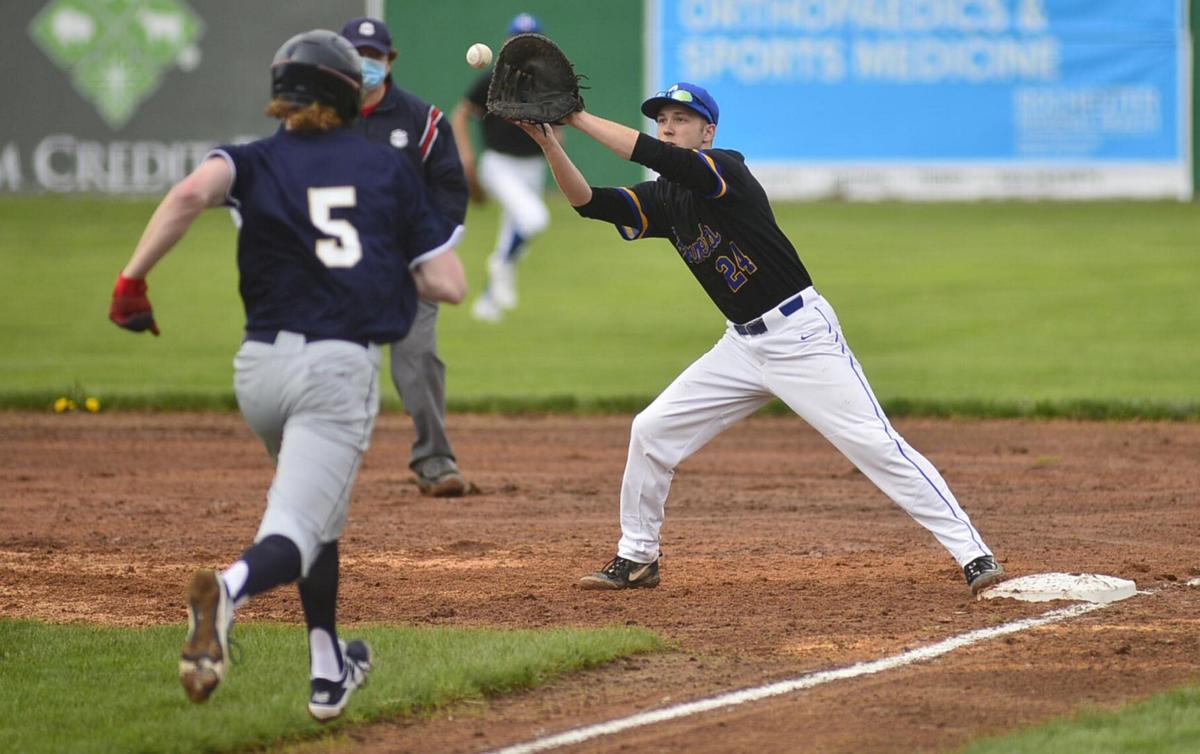 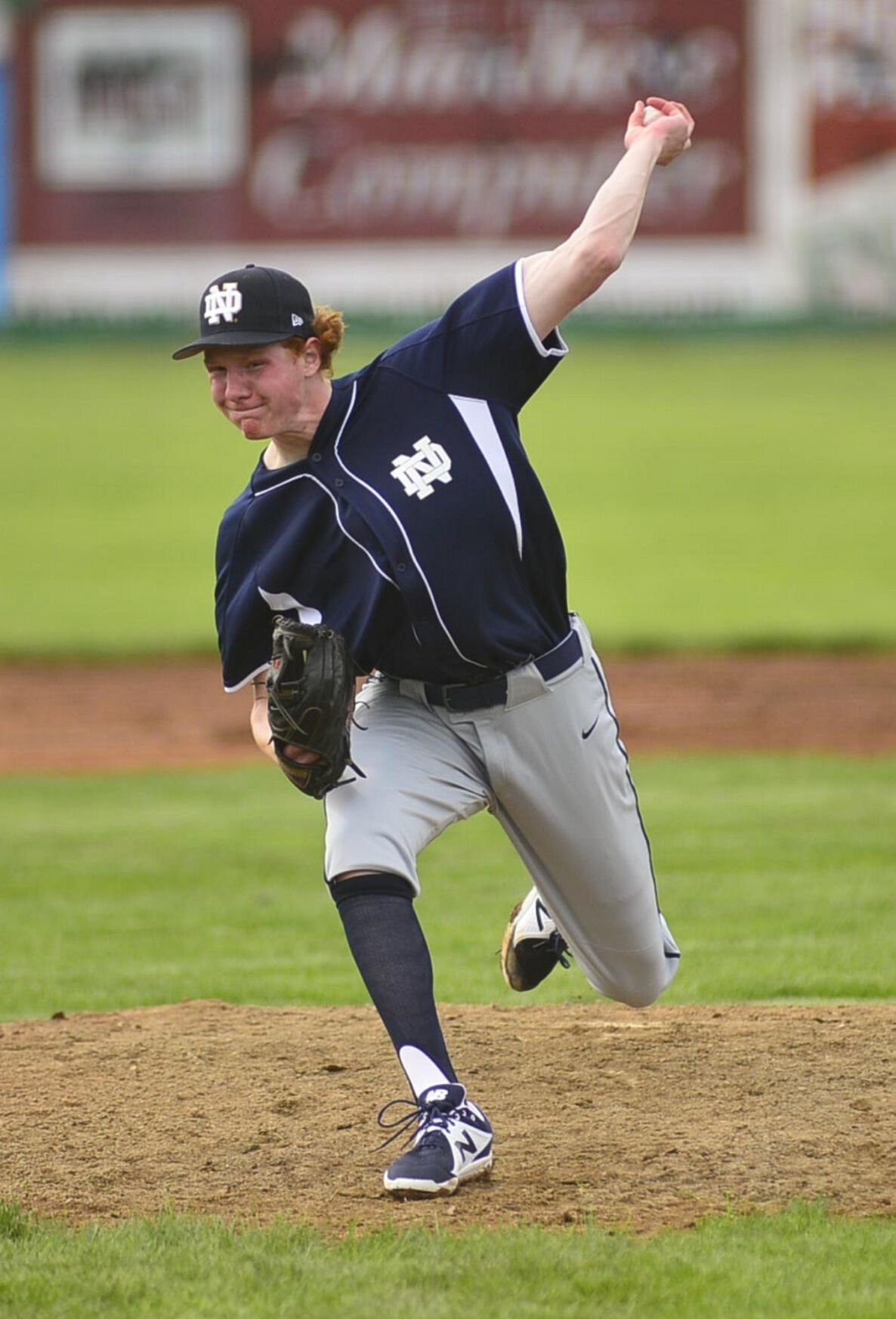 Mark Gutman/Batavia Daily News Notre Dame junior Gavin Schrader will be one of many Irish players expected to have a big spring.

Mark Gutman/Batavia Daily News Notre Dame junior Gavin Schrader will be one of many Irish players expected to have a big spring.

BATAVIA — Facing a 1-2 count with two on and nobody out in the top of the fourth inning of Tuesday’s season opener between Oakfield-Alabama and Notre Dame, Hornets junior Cooper Colantonio proceeded to foul off three pitches to stay alive in what was a critical at-bat in a scoreless game.

Colantonio continued to battle, worked the count full against ND junior ace Gavin Shrader, and eventually lined a single through the left side, scoring Hornets’ freshman Bodie Hyde who had reached on a hit by pitch. Hyde was hit by three pitches in the game and reached base all four times he came to the plate.

“When (Notre Dame first-year head coach Rick Rapone) called time to talk to Shrader, I went over to talk to Cooper He had a big smile on his face and said, ‘Coach, I’m feeling good,” added Anderson. “I told him to be himself and get the first RBI of the year, to which he responded, ‘I got this.’”

Following Colantonio’s run-scoring single, a walk from Aiden Warner sandwiched between two strikeouts loaded the bases for O-A, as junior Gaige Armbrewster stepped to the plate with two outs. Armbrewster then legged out an infield single which drove in senior Peyton Yasses who had reached on a walk, then leadoff hitter Colton Yasses reached on an error to push across Colantonio.

When the dust settled, it was 3-0 Hornets, and that’s how the top of the fourth inning would end.

That’s all O-A would need, as the Irish offense was anemic throughout the night due in large part to the effort of Hornets’ ace Peyton Yasses. The O-A senior hurled a complete game, allowing just three hits and striking out eight while walking just one. For his effort, Yasses was awarded the Casella Waste Athlete of the Game on the Batavia Daily News’ LIVE stream. The game is available for replay on YouTube.

“Peyton works extremely hard both in and out of practice. I think tonight we all got to see that culmination of work coming together,” said Anderson. “He kept telling (O-A assistant coach Alex Grice) and I that he felt really good on the mound. So we don’t see it as a surprise, but Coach Grice and I are extremely excited and happy for him with the performance he put on tonight.”

The lone Irish run came in the bottom of the sixth inning, as Shrader laced a leadoff triple 350 feet off the base of the right-center field wall and was later scored on an RBI groundout from junior Collin McCulley.

Had it not been for ND’s struggles offensively, Shrader may have found himself earning Athlete of the Game honors. The junior started the game on the hill for Notre Dame, lasting the first 3 1/3 innings before being relieved by sophomore Bryceton Berry. Through his 3 1/3 innings, Schrader allowed just two hits and struck out nine.

“Shrader is a great pitcher, and he brings it,” said Anderson.

First-year Irish head coach Rick Rapone pulled Shrader, likely due to pitch-count it being the first game of the season, following a strikeout of O-A senior Ty Kornow for the first out of the fourth. When Shrader exited the game, the score was 1-0 and two men were left on base.

Berry finished out the fourth inning and then gave way to freshman Ryan Fitzpatrick who navigated his way through three scoreless innings.

Peyton Yasses (1-0) earned the win, while Schrader was hit with the tough-luck loss.

“The guys aren’t satisfied,” said Anderson. “Don’t get me wrong, all of us are extremely pumped because of the win, but the first thing that was said by the guys when Coach Grice and I got to right field with them is that this is just the beginning.”

Oakfield-Alabama begins the season at 1-0, Notre Dame is 0-1.

“We as the coaching staff didn’t even have to say anything, but they understand and acknowledge that this is just the start,” continued Anderson. “This is a big win for the guys, the team and the program. This is a special group of guys, and they all continuously push each other and strive to be the best they can be.”

The Hornets look ahead to a matchup with Pembroke on Thursday, while ND will take on Byron-Bergen the same day.

“We are going to enjoy this one tonight,” concluded Anderson. “But tomorrow, it’s right back to work to get ready for Pembroke.”