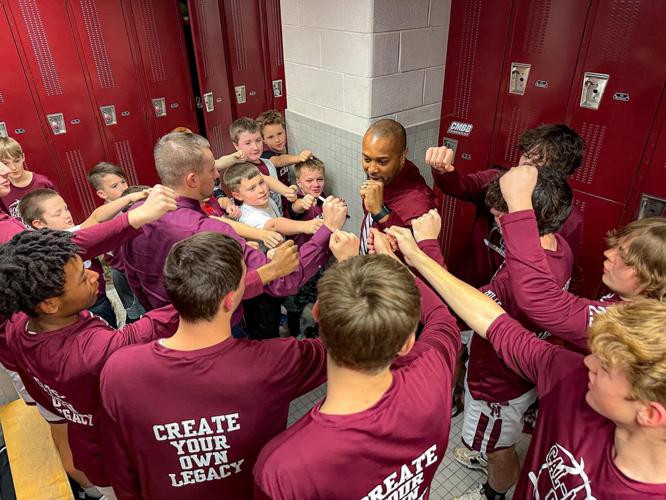 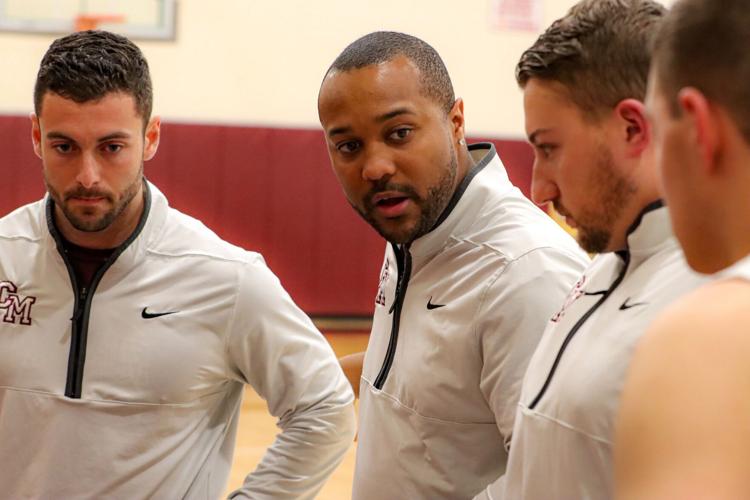 LETCHWORTH — The past two and a half months have been challenging for Cal-Mum varsity boys’ basketball coach Josh Shelton and his group of athletes.

A 2007 Cal-Mum alumnus, Shelton took the reins of the Raiders boys’ basketball program this season after longtime head coach Dan Dickens stepped away following a successful run that concluded last season. To begin his reign as C-M head coach, Shelton and his team have endured countless struggles that led them to an 0-10 start to a new era of Raiders basketball. Throughout the winless stretch to begin the season, Shelton’s team was, at times, inefficient, encountered typical challenges that come with such a long winter season, and continued to lose. But one thing this team never lost was hope.

Shelton and his crew continued to battle, forging ahead through continual failure to eventually rise from the ashes with a 69-58 win over Livingston Conference foe Letchworth on Tuesday night.

“I was so happy for our guys,” said Shelton. “They fought and earned that one. They’ve been great to work with despite some challenging times. These guys want to be coached and pushed. They want to be successful on and off the court and have bought into everything the coaches have told them.”

Cal-Mum seized a three-point lead at the end of the first quarter behind four 3-pointers from Jeremy Raymond and never looked back, increasing their advantage to 14 at the break, absorbing a dismal six-point third quarter before rebounding with an impressive effort during a 21-point fourth to seal the 11-point win.

“I have to tip my hat to (Letchworth head coach) Tyler King and his team,” said Shelton. “Those guys play hard.

“We were very proud of the effort we got from Nate Doll and Braeden Fonte on both ends of the floor. They combined for 33 of our 69 pts and combined to grab 22 rebounds. Nate also had a couple of blocks, and Braeden had three steals. Donny Peet did a great job of managing the game at the point for us, creating for himself and others and also had five steals. Jeremy Raymond knocked down five big 3s for us. Ryan Mills and Jeremiah Anderson did a great job on the defensive end, limiting their guards offensively. Overall, it was a great team win, and I’m really proud of the way our guys fought.”

The Raiders had four players score in double figures, including Doll, who scored a game-high 19 points while securing 10 rebounds to complete his double-double, while Raymond netted 15 points, Foote added a double-double of his own with 14 points and 12 rebounds, and Peet chipped in 13 points.

“We did not defend well enough to win this game,” said Coach King. “Cal-Mum made their shots early against our zone. Jeremy Raymond gave them a great boost to start the game. Coach Shelton had his team ready to run hard and play at a fast pace. Once again, we showed moments of putting everything together, but tonight there weren’t enough of those moments.”

For Shelton and his team, Tuesday’s victory was a long time coming.

“Honestly, it’s a huge weight off our shoulders,” said Shelton. “Every game, you’re stressing and wondering, ‘is this the one?’ The horn went off, and I literally just exhaled a big sigh of relief.”

Since beginning his journey as head coach, Shelton has felt every emotion imaginable as he and his team have fought through adversity.

“Anger, frustration, self-doubt — I’d be lying if I said I didn’t start to question myself if I’m really capable of holding the reins to the program,” said Shelton. “You feel like you’re letting so many people down. From the kids on the team to the dozens of guys who went through the program over the years, and even Coach Dickens.”

Through the struggle, Shelton says the Cal-Mum community helped him push through some difficult moments.

“But then I’ll go to the grocery store and see a former player or a parent of a former player, and they’re like, ‘Hey, we’re rooting for you. Keep working. It’ll come. You’ll get one of many!’ And that support was a big lift,” he said.

Shelton began his C-M basketball journey as a youngster, serving as a varsity team manager during Coach Dickens’ first season as head coach during the 2001-2002 campaign. He then went on to play for Coach Dickens before graduating in ‘07 and returning to the program as a varsity assistant during the ‘13-’14 season. The following year, Shelton began an eight-year run as the C-M JV coach before advancing to the varsity level this year.

“I’ve been really fortunate to have a front-row seat in so much history within our program,” said Shelton. “I’ll never forget in 2002 in the quarterfinals at Le Roy when we were the No. 5 seed, and they were the No. 4 and Rob Moten dunked as we went on to beat them and play the semis and finals both at the Blue Cross Arena. That was the loudest I’ve ever heard a gym. But that was also the beginning of my love for this program.

“As a player, the life lessons that high school sports give you and the brotherhood with your teammates — there’s nothing like it. Even though track and field was my best sport in high school and college, basketball was always my first love. So when Coach Dickens offered me a chance to coach modified and then join the varsity staff, that was everything to me. As the JV coach, we had a lot of success. We won over 100 games in my eight years, and our varsity team won three sectional titles in seven appearances during that time, which has to be my favorite memory — just being along for the ride with our guys.”

Moving forward, the mission for Shelton and his program is simple. Continue to build the culture.

“Now, as the varsity coach, I often tell our guys that this is for life. It’s so cliche, but our program is like a family,” said the C-M head coach. “Guys from 10 years, 20 years, even 50 years ago reach out to our staff and players just to wish us luck and let us know they’re thinking of us. We tell our players to value every single minute they have in a C-M uniform, and five-to-10 years from now, as they’re playing in our alumni game, they’ll wish they could go back for just one more game.

“Winning in this program means so much to me because it’s not about me. It’s about the nine guys we put on the court each night. The hundreds that came before them and the hundreds that will come after them. I’m just blessed to be in this position and looking forward to all that we go on to do together.”