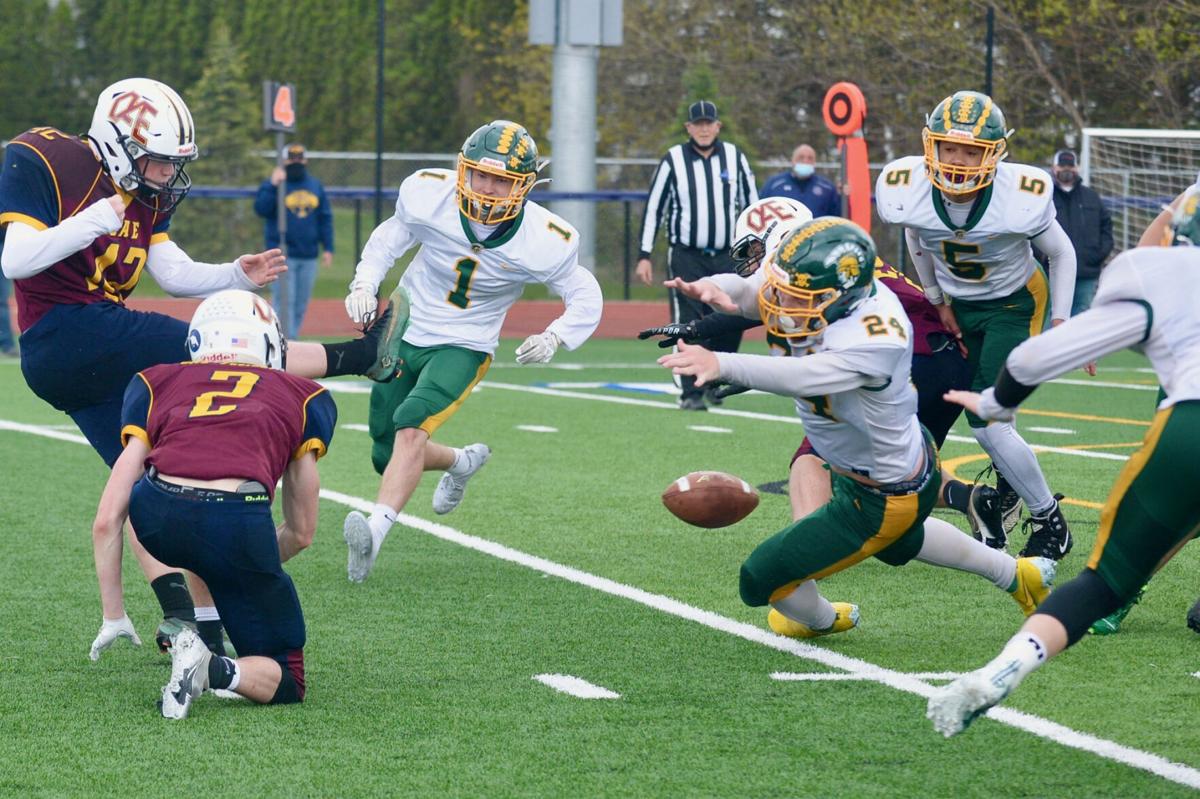 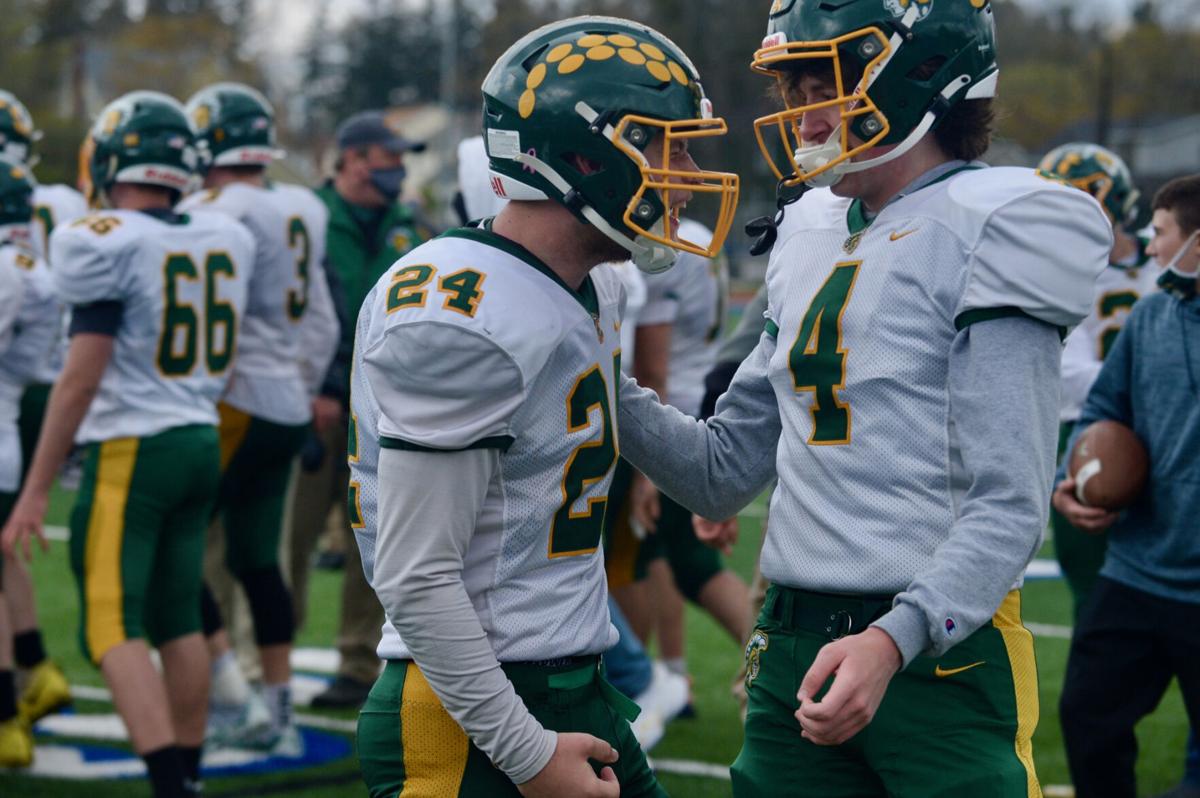 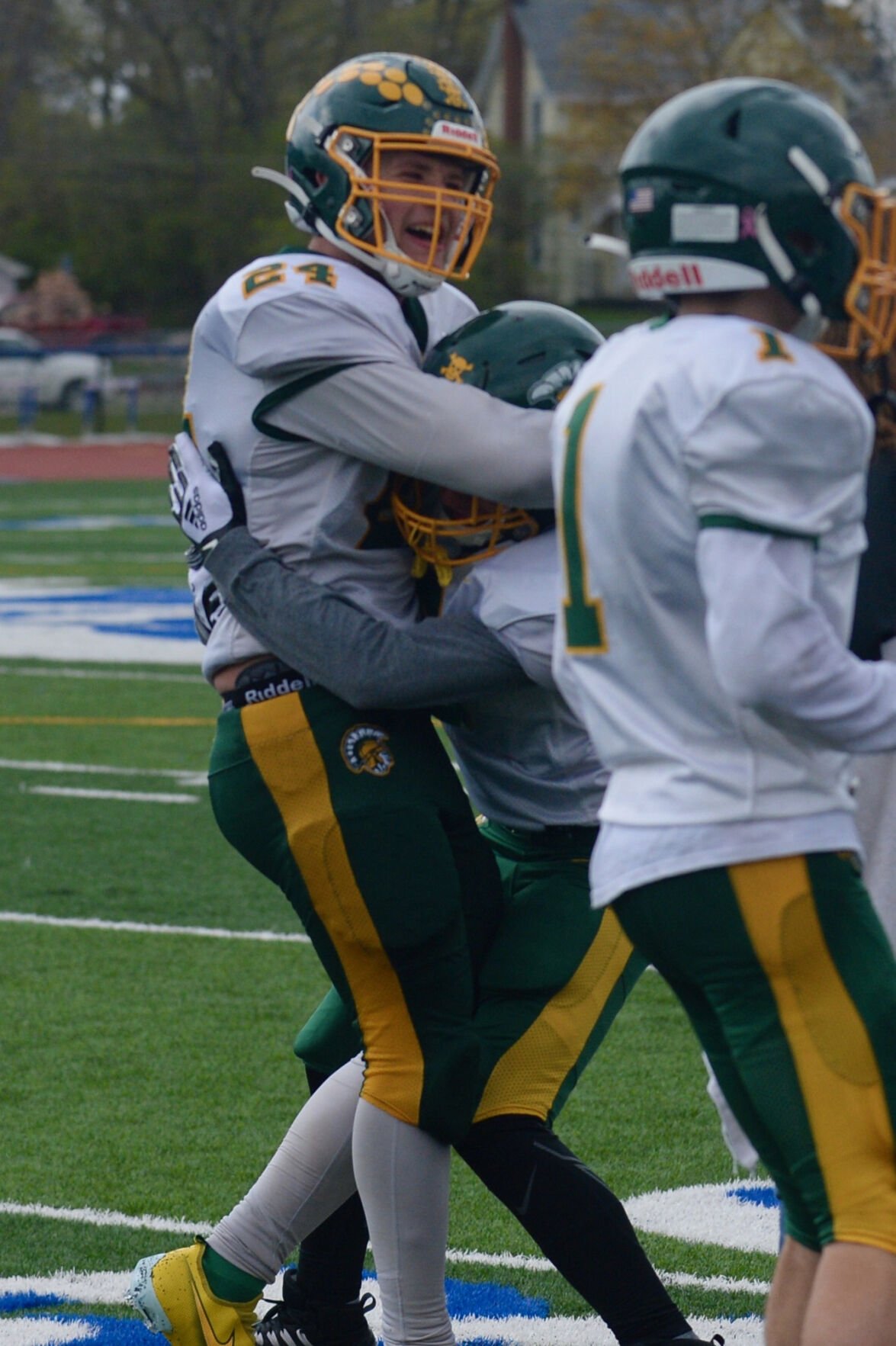 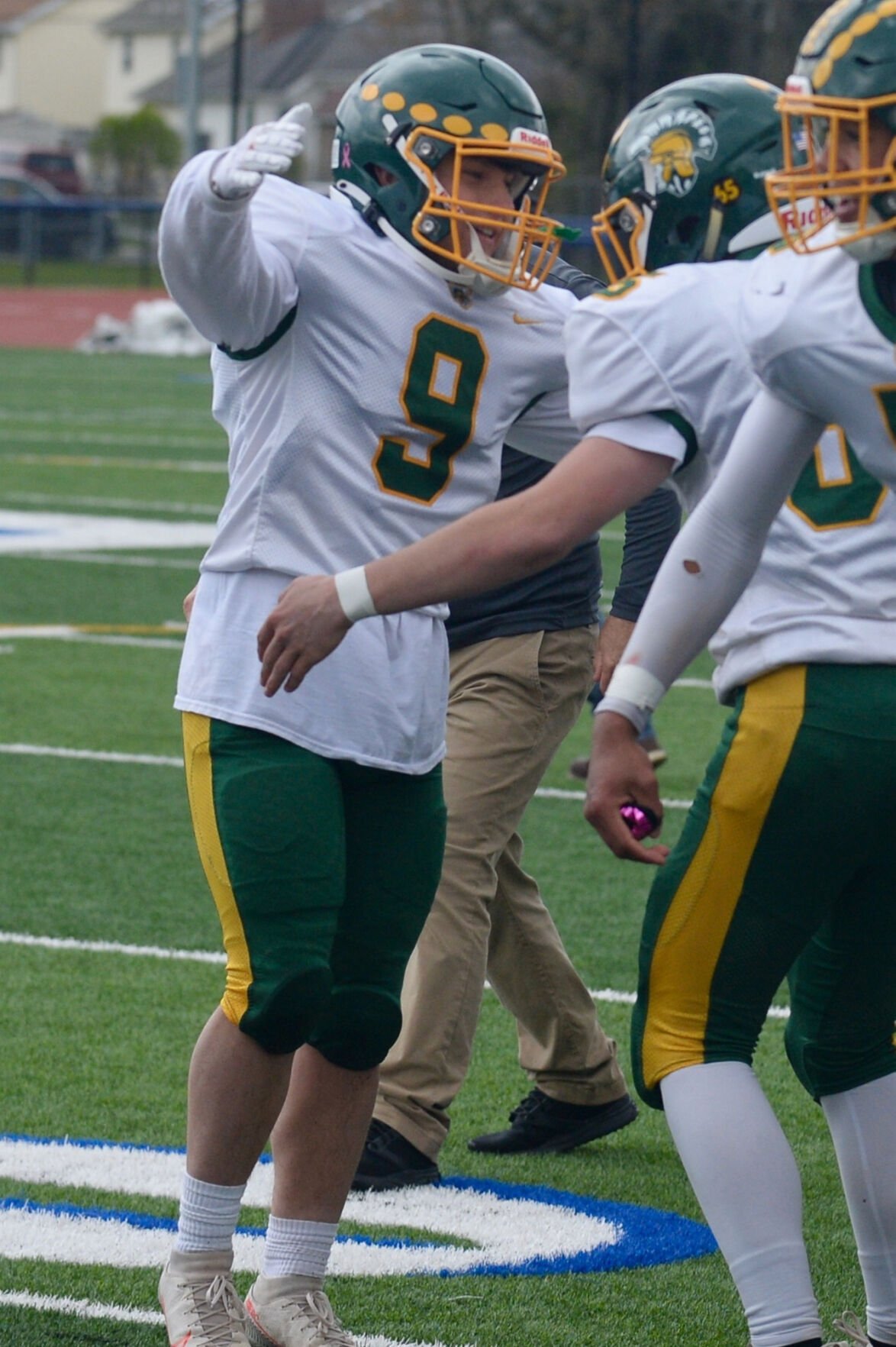 Alex Brasky/Batavia Daily News | Trojans kicker Eric Cline celebrates with his teammates after Alexander defeated Oakfield-Alabama/Elba 9-7 in the Class D Semifinal. Cline accounted for all nine of the Trojans' points on three made field goals.

Alex Brasky/Batavia Daily News | Trojans kicker Eric Cline celebrates with his teammates after Alexander defeated Oakfield-Alabama/Elba 9-7 in the Class D Semifinal. Cline accounted for all nine of the Trojans' points on three made field goals.

BATAVIA — If anyone thought that Sunday’s Section V Class D semifinal between No. 1 Oakfield-Alabama/Elba and No. 4 Alexander was going to be a ‘David vs. Goliath’ matchup at Van Detta Stadium in Batavia, someone forgot to tell the Trojans that they were supposed to be David.

And when many thought it wasn’t going to happen, Alexander is heading back to the Class D championship game.

“We knew we had a chance and we knew we had to play a very good opponent today,” Alexander head coach Tim Sawyer said. “We knew we had to do every little thing right; we knew we had to tackle right, get off the ball, sustain blocks, control the clock. We played by the rules of our success, fourth and long’s we’re bringing this guy (Cline) in to do his job. We have the saying of do your 1/11th, do your job, and it’s not just talk.”

The win for Alexander will send the Trojans to their fifth straight Class D championship as they will be looking for their third title in that span.

Quietly one of the best kickers in Section V, Cline connected on field goals of 27 and 23 yards before a 36-yarder proved to be the game-winner early in the fourth quarter.

“I was nervous but more excited than anything,” Cline said. “I trust the guys around me to block and I was just trying to put it through the uprights and take this team home.”

Despite Cline’s heroics, the vaunted O-A/Elba offense — which came into the game averaging 40 points an outing — had a number of chances to stage a late game comeback, but all went for naught.

“Hats off to Alexander today,” O-A/Elba head coach Tyler Winter said. “They won the turnover battle and the battle at the line of scrimmage. It is very difficult to win a football game when you are 0-2 in those two categories. We had an opportunity to win it at the end, but we couldn’t make enough big plays when it counted.”

Brayden Woods ran 21 times for 69 yards in the win for Alexander, while Nick Kramer led the Trojans in rushing with 93 yards on 18 carries.

After Cline’s third field goal of the afternoon early in the fourth, a big run from Mott had the Aggies in Alexander territory before Nick Kramer came up with a huge interception to halt that drive.

After forcing a Trojans punt, O-A/Elba once again drove into Alexander territory but once again were stuffed — freshman Clayton Bezon hammered Mott on a third-and-short before Devin Dean did the same on fourth down to force a turnover on downs.

The Aggies, though, would still have one more chance remaining.

O-A/Elba stopped Alexander and forced a three-and-out on its next possession, allowing less than a minute to run off the clock; A Dean punt set the Aggies up at their own 36 with less than two minutes to play.

On a fourth-and-six with under a minute to play, freshman quarterback Bodie Hyde connected with Gaige Armbrewster for 22 yards down to the Alexander 15 with 30 seconds to play. A Mott five-yard run to the 10 was sandwiched around a pair of spikes from Hyde to set up the final field goal attempt, which was blocked by a combination of Trojans, including Dean and Jay Morrison.

Spencer Wuest had two fumble recoveries on the day and Kramer added 10 tackles to go with his interception in the win for Alexander, while Jake Laney had eight tackles and Dean was a rock once again with eight stops.

“Our defense truly gives us a chance every game,” Sawyer said. “Coach McCracken has been doing it the last eight years and year after year at Alexander we’ve had tough kids. We tackle well and I think they really value the defensive side of the ball. We’re proud of that defense and Coach had us prepared.”

Despite the low-scoring final, this one started out as though it may be a shootout.

O-A/Elba fumbled on its third play of the game, which was recovered by Alexander at the Aggies’ 33. After Kramer converted a third-down earlier in the drive on a 12-yard run that moved the ball deeper into OA/Elba territory, Kline would connect on the 27-yarder with 7:48 left in the opening quarter.

Right back came the Aggies on their next drive. On second down Hyde burst through the right side of the line and outraced the Trojans defense for a 58-yard score and a 7-3 O-A/Elba lead.

Yet that was all that the high-scoring Aggies could muster.

With an efficient running attack, Alexander controlled the ball for much of the opening half.

Following the Aggies touchdown, the Trojans embarked on a 12-play drive that took over seven minutes off of the clock, though the drive would stall when Kramer and Morrison mishandled a hand-off attempt at the O-A/Elba 30.

However, five plays later the Aggies would fumble again, handing the ball right back to Alexander, which proceeded to drive 10 plays, taking over five more minutes off the clock, capped with the 23-yard field goal from Cline, which was preceded by an offsides on the Aggies and cut the lead to 7-6.

“He’s always consistent with us, he comes to practice and kicks every day and he does whatever he’s asked to do every time,” Dean said of Cline.

The Aggies, though, would threaten again. A pretty 44-yard strike from Hyde to Zach Howard set O-A/Elba up inside the Trojans’ 15 but the Alexander defense stepped up once again. This time the Trojans forced an incomplete pass on fourth and five to send it to halftime as a one-point game.

Mott finished with a tough 91 yards on 20 carries, while Hyde finished the day with six carries for 114 yards, with 76 yards through the air.

On it’s first drive of the second half, once again O-A/Elba appeared as though it was primed to take the lead.

A pair of long runs from Hyde had the Aggies in striking distance and Mott appeared to have O-A/Elba on the verge of a score with a 32-yard run down to the Alexander two yard-line, but a holding penalty would nullify the play. The 12-play drive was eventually stopped when the Trojans forced another turnover on downs.

The ensuing drive saw Alexander take the lead for good.

A 42-yard run from Kramer on a third-and-four would put the Trojans deep in O-A/Elba territory and Cline’s 36-yarder would split the uprights with 11:08 remaining for the 9-7 advantage.

Payton Yasses was outstanding for O-A/Elba with a game-high 13 tackles, while Dontrell Jenkins added seven tackles, a sack, a forced fumble and a fumble recovering and Kaden Cusmano added eight stops — two for a loss — and a sack,

Alexander will now get a chance at a rematch with Avon, which took care of Canisteo-Greenwood in the other semifinal matchup on Sunday.

The Braves completely handled the Trojans 21-0 in Week 2 of the regular season despite the Alexander defense forcing four turnovers on the day.

“No excuses, they whooped us pretty good in Week 2 of the season,” Sawyer said. “It’s a new week, a new setting and I know it’s 0-0 right now and we’re looking forward to that game.”

While Alexander won titles in 2016 and 2018, Avon’s last sectional crown came in 2014 when it won the Class DD title. That capped a span of four blocks in seven years for the Braves.

The Aggies finished at 5-2.

“All in all, I feel that this was a huge first season back in 11-man football,” Winter said. “These boys did a ton of great things all year. Today was obviously not the outcome that any of us wanted. This senior class can hold their heads high and be proud of their careers, while the underclassmen can use today as a valuable learning experience for the future. We’ll be back.”