Sign Up
Log In
Purchase a Subscription
You have permission to edit this article.
Edit
Home
COVID-19: Back open for business
News
Sports
Obituaries
Opinion
Arts & Life
Calendar
Photo and Video
Ads
eEdition
More
Share This
1 of 6 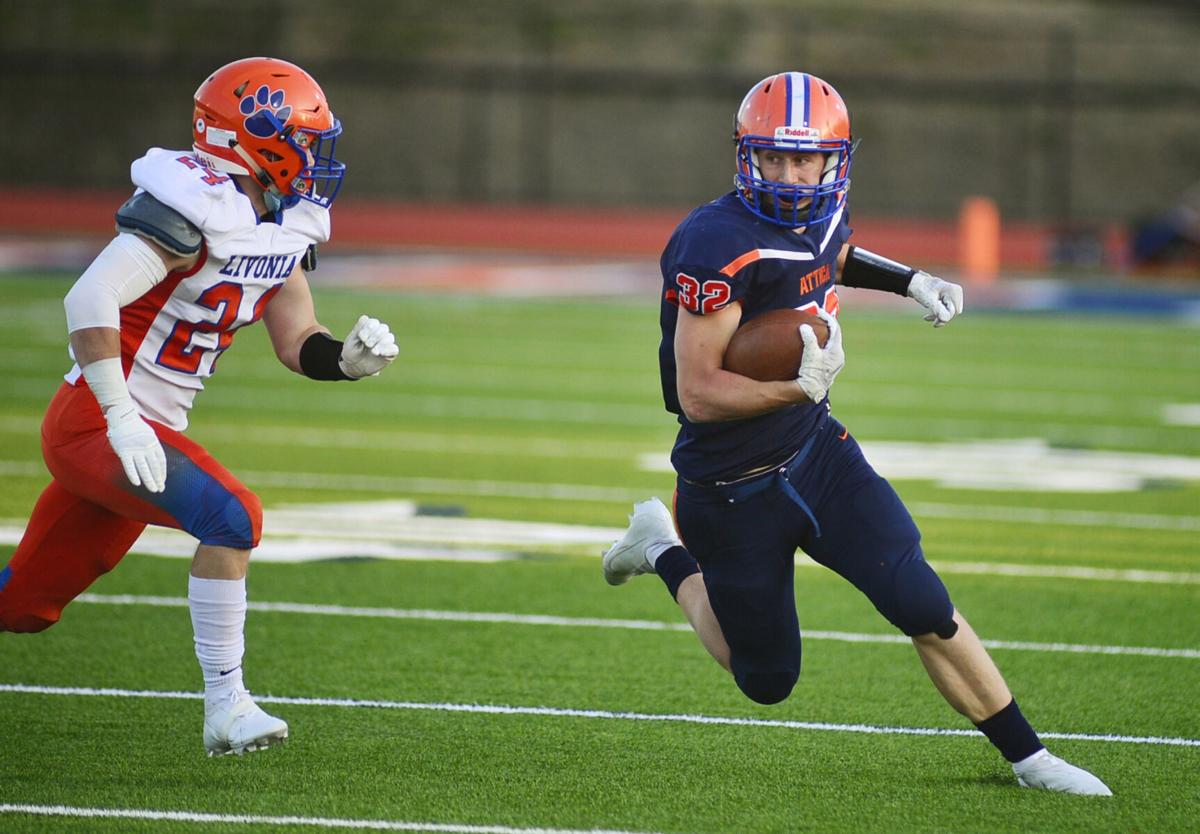 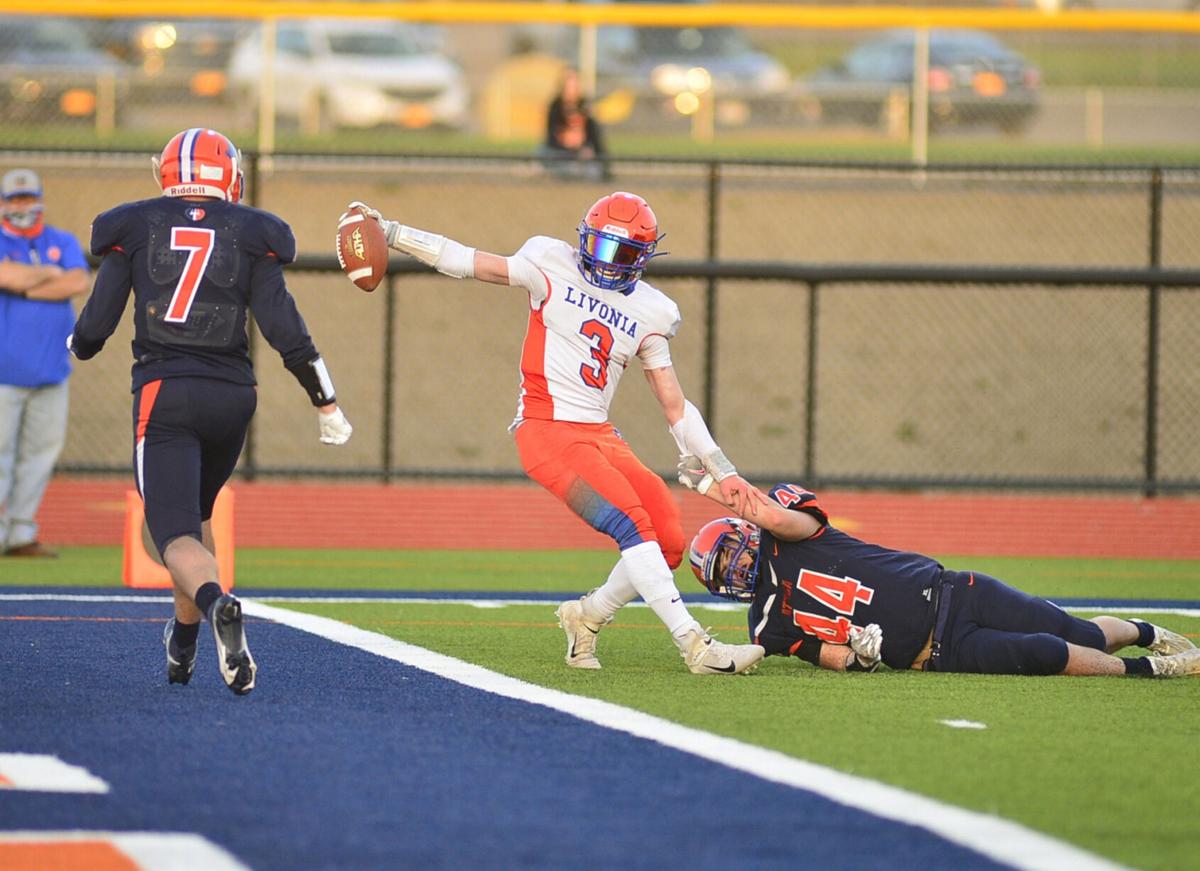 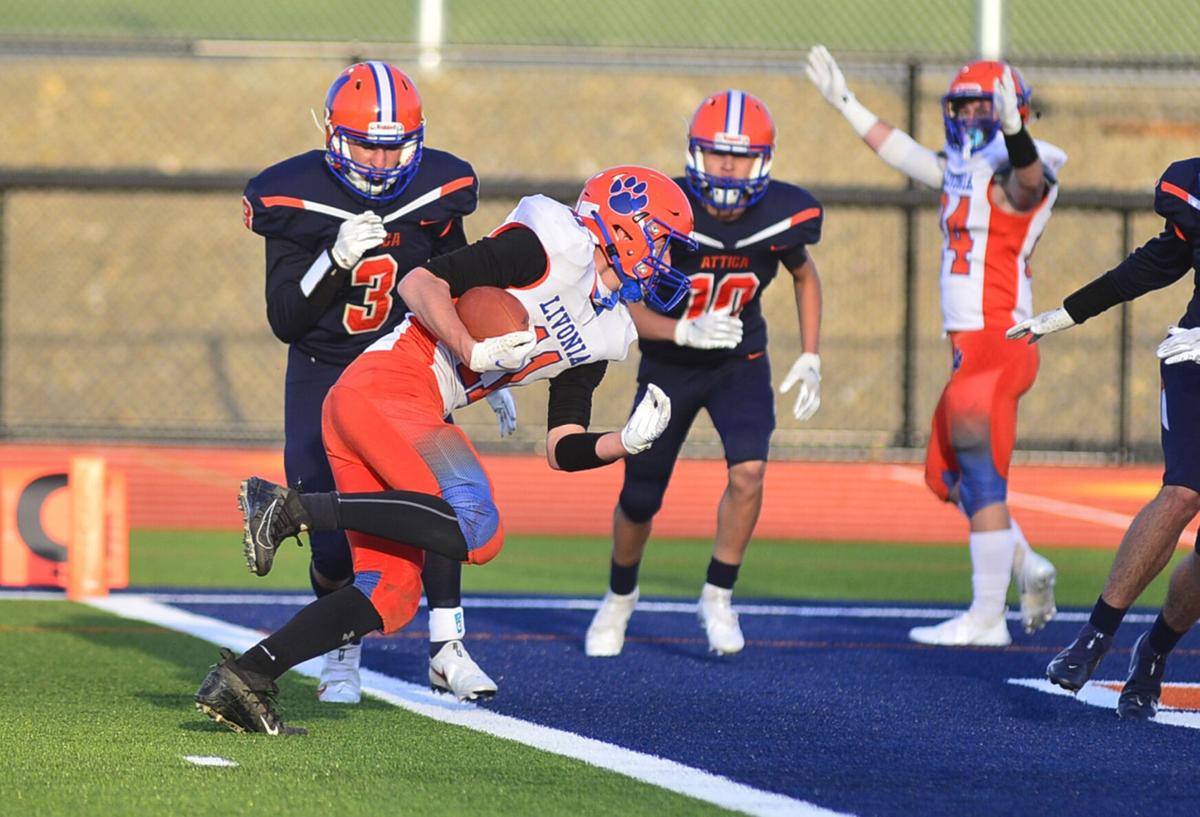 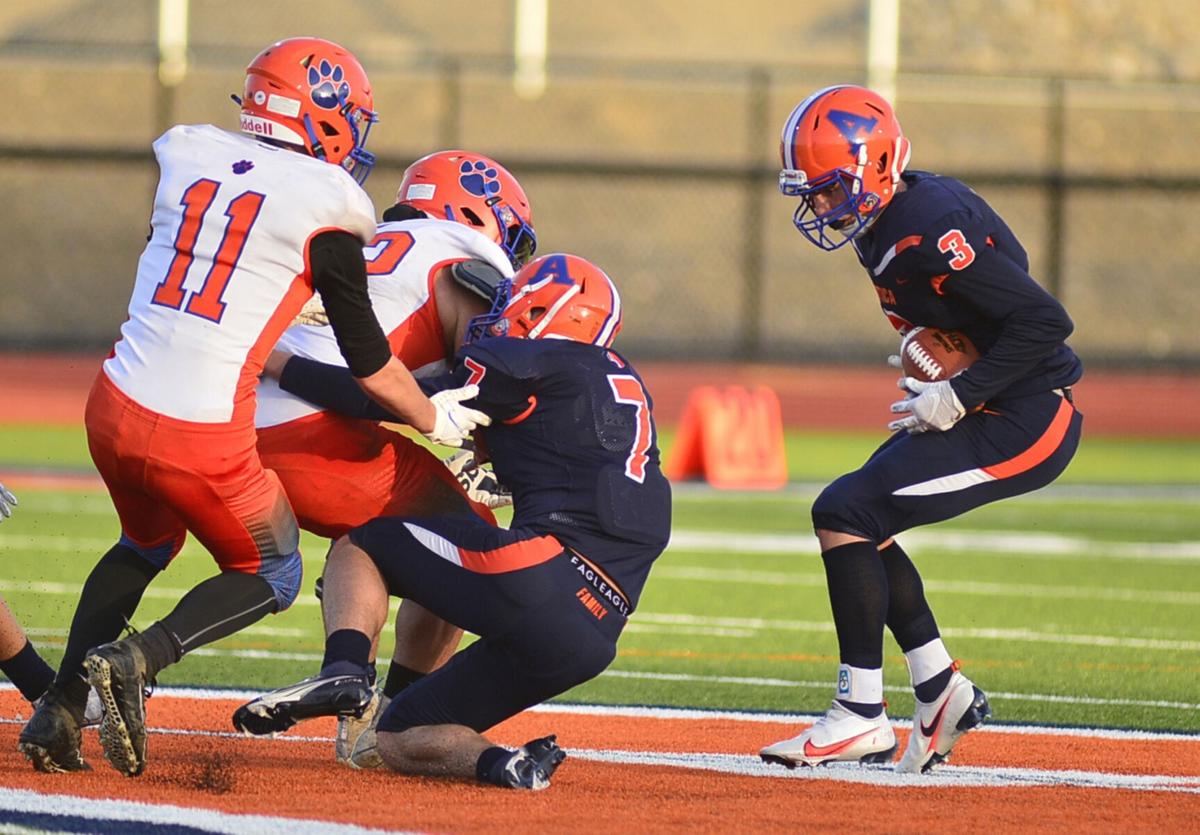 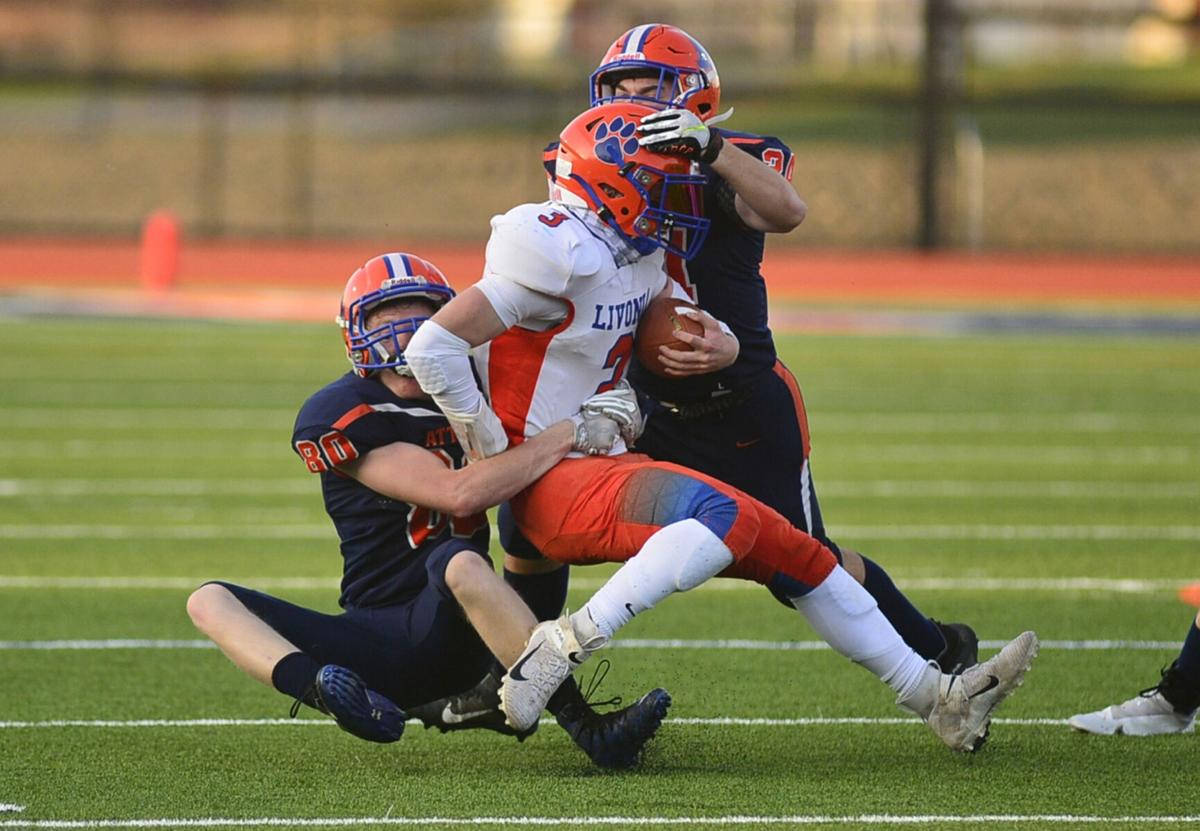 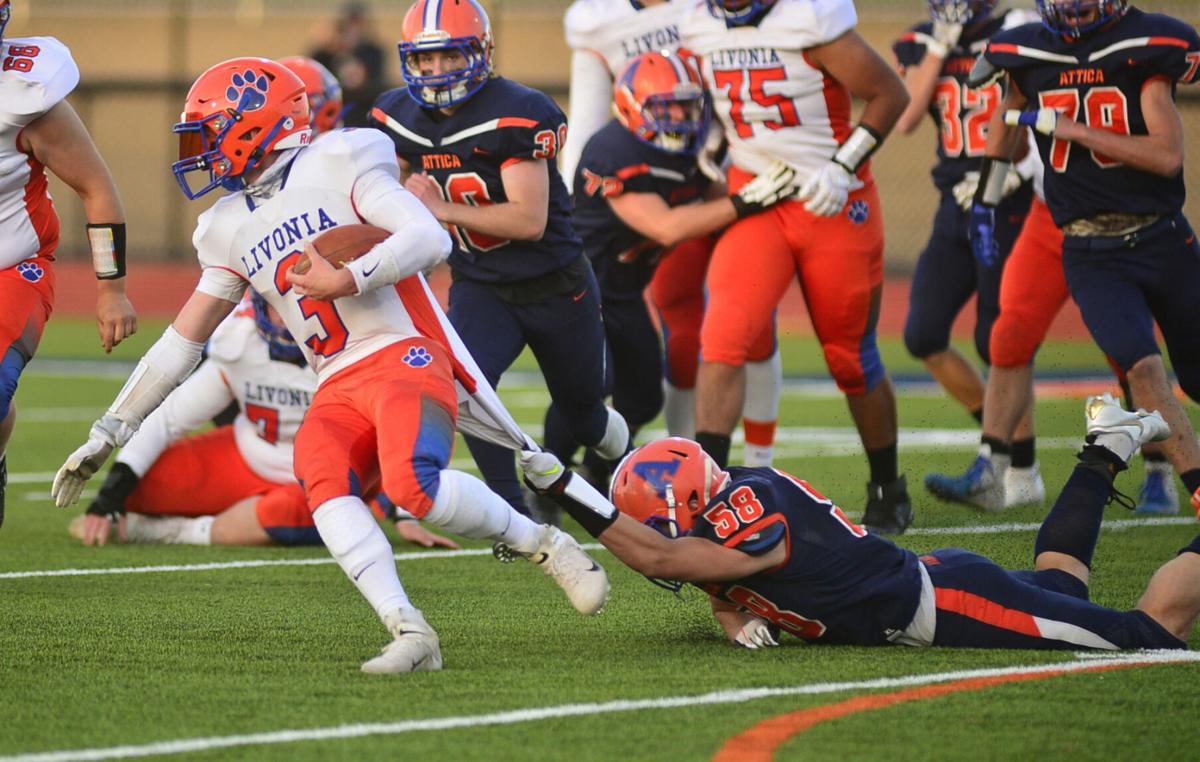 ATTICA — Attica football coach Caleb Sabatino found out a lot about the character of his team Wednesday night.

Trailing 24-0 at the half to undefeated and defending sectional champion Livonia, several programs would have folded up shop and went home for the night.

Not these Blue Devils.

Instead, Attica outscored the Bulldogs 14-12 after the intermission but fell short 36-14 in Class C action at Alumni Stadium.

The loss dropped Attica’s record to 2-2 and eliminated the Blue Devils from sectional contention as only the top four teams qualify.

But while disappointed his team fell short to a Livonia team that improved to 4-0 on the season, Sabatino was proud of his team for never giving up and fighting until the very end.

“I’m so proud of the way my team battled tonight,” coach Sabatino said. “Hats off to Livonia, they are a really good football team and a class act, but our kids never quit. We talk a lot about how football can parallel life. Sometimes it gets tough and the easy thing to do is throw in the towel, but that’s not what happened tonight. We played with pride and gave it all we had.”

Livonia pretty much had their way in the first half as the Bulldogs’ defensive line limited Attica’s ground and pound attack to minimal yards.

Offensively, the Bulldogs did what they do best, utilize senior QB Alex Minnehan’s legs and ability to make something out of nothing.

After the two teams traded early possessions, Livonia struck first as Minnehan found senior wideout Troy Galbraith for an 11-yard scoring pass on third and five that made it 8-0 with 3:04 left following Minnehan’s two-point conversion.

Early in the second period, Minnehan took a second and one call for a 57-yard touchdown when he started towards the right edge and then cut back to the left side for the long scoring run with 9:38 left in the first half.

Livonia would force another Attica punt in their next series which would set up the next Livonia score which came late in the first half.

The Bulldogs would hit the endzone late in the second when Minnehan would take a third and goal call from thew 14 and scramble in for the touchdown.

Minnehan’s PAT run would give the Bulldogs the 24-0 lead at the break.

Attica would come out after the intermission and put together a nice scoring drive, which was aided by a pair of Livonia penalties, including a roughing the passer call that kept the drive alive and was finished with a perfect 10-yard scoring strike from junior QB Jake Dressel to senior wideout Ayden Goll.

Dressel would call his own number on the PAT conversion where he ran it in to cut the deficit to 24-8 with 6:24 remaining in the third.

The momentum would continue to shift Attica’s way after Livonia would punt for the first time after junior Konnor Schroeder sacked Minnehan for a big loss eventually forcing fourth and a mile.

On a third and long from their own 40, Dressel hit senior Drew Cusmano on a nice pass near midfield where Cusmano grabbed it and started running down the sideline into Livonia territory where a hustling Minnehan in the secondary poked the ball out of Cusmano’s hands as Livonia’s Jake Smith was there to recover it ending Attica’s hopes at cutting the deficit to a one score game.

Attica’s defense would force a Livonia punt on the ensuing series but one play after the Bulldogs kicked it back, sophomore linebacker Jack Kearney would put a final nail in Attica’s coffin.

On first down from their 30, Dressel’s pass was picked off by Kearney at the 35 and taken all the way down to the one setting up the Bulldogs’ next score two plays later when senior Trevor Allen pounded it in for the score and a 30-8 advantage with 10:38 left.

Livonia would score their final TD of the game with 2:29 left when senior Kevin Travis took a fourth and one from the Attica 11 and hit paydirt to give the Bulldogs the 36-8 advantage.

Attica would score on their final possession when the Blue Devils moved the ball after a big Zach Strzelec run took the ball deep into Livonia territory when Dressel hit Goll for his second touchdown of the game — a four yard strike — with under 30 seconds left to make it 36-14.

Minnehan led all players with his 23 carries for 192 yards, one TD and one interception. He was also 4-of-13 passing for 48 yards and one TD.

Strzelec led Attica with 95 yards on 16 carries while Goll made seven catches for 61 yards and two TD’s. He also added a two-point catch.

Defensively,Strzelec, Wyatt Kauffman and Jeremiah Donohue all had 11 tackles.