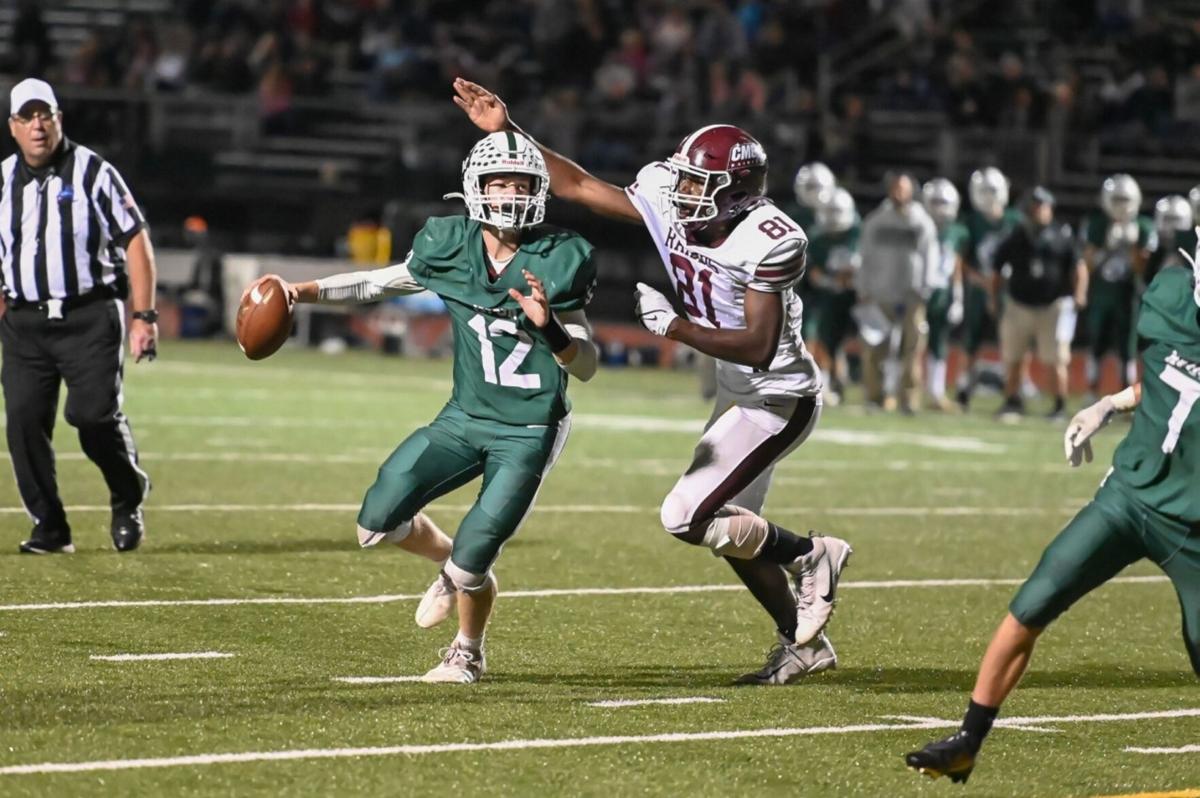 Doug McFarland Photography | Avon senior quarterback Andrew Rowland rushed for two touchdowns and recorded an interception on defense as the Braves remained unbeaten with a win over rival Cal-Mum/Byron-Bergen. 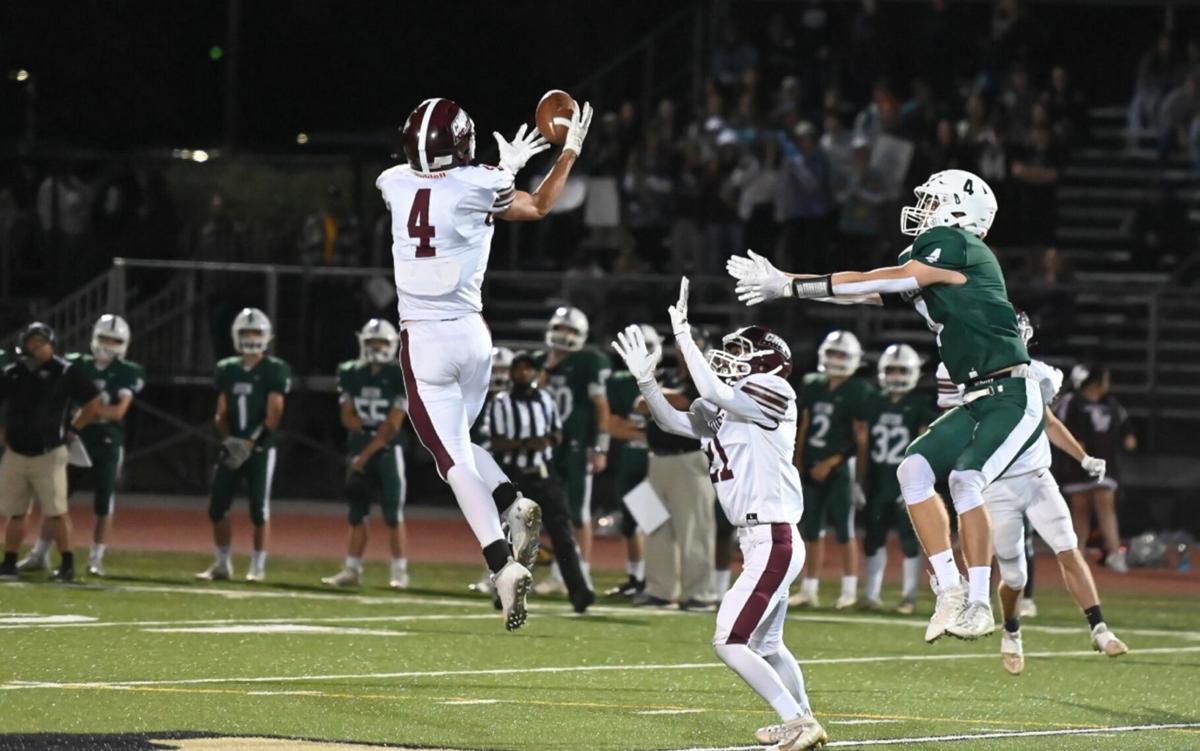 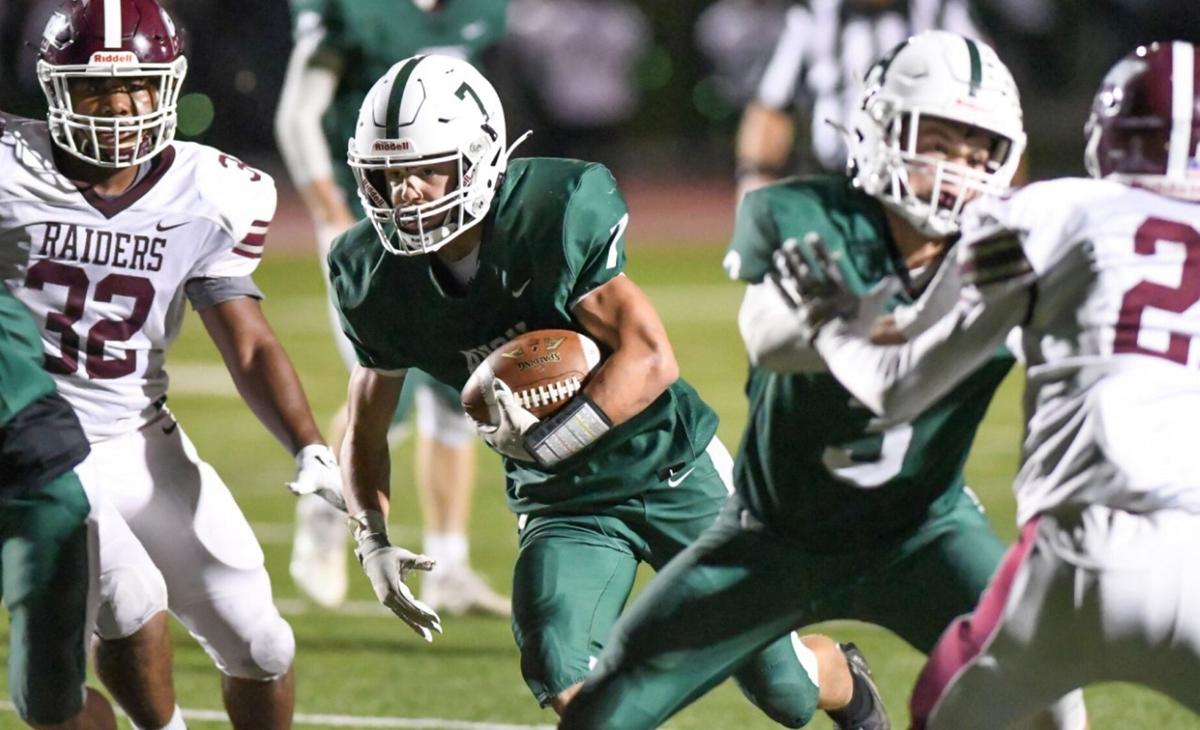 Doug McFarland Photography | Senior running back Thomas Welch scored two touchdowns and recorded an interception on defense to help the Braves' cause. 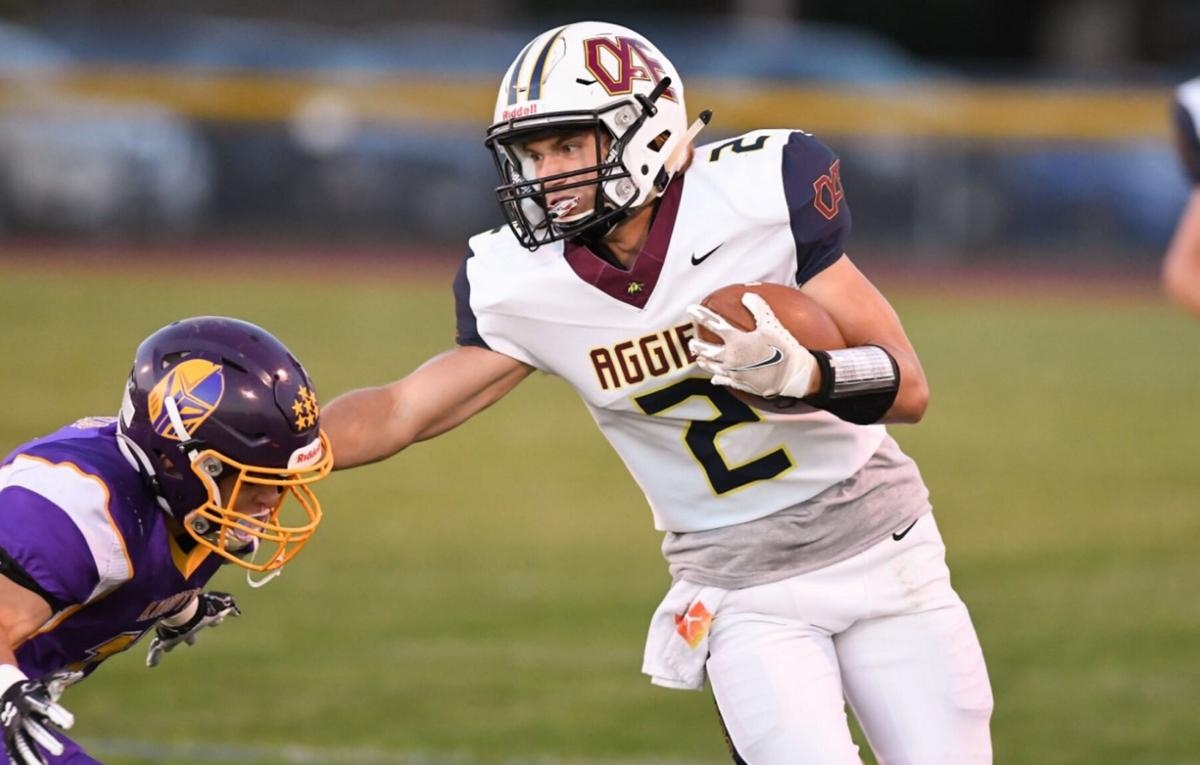 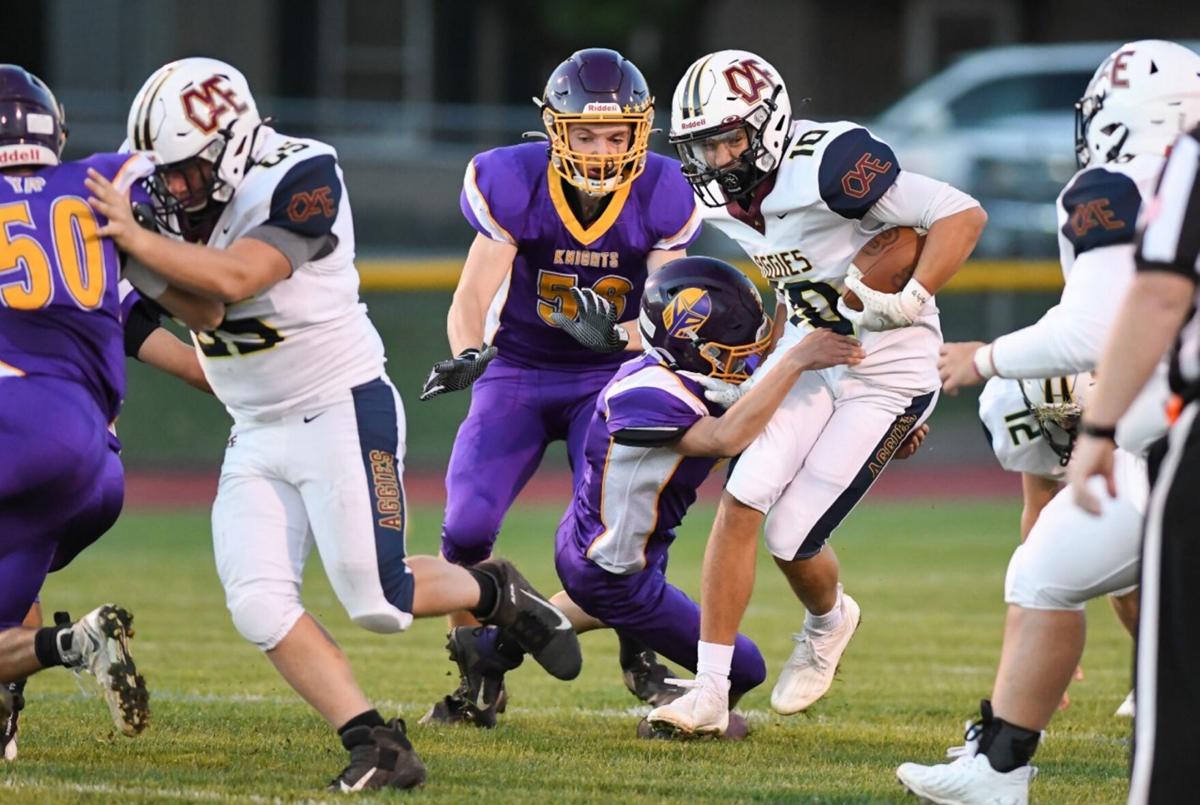 Doug McFarland Photography | Avon senior quarterback Andrew Rowland rushed for two touchdowns and recorded an interception on defense as the Braves remained unbeaten with a win over rival Cal-Mum/Byron-Bergen.

Doug McFarland Photography | Senior running back Thomas Welch scored two touchdowns and recorded an interception on defense to help the Braves' cause.

AVON — The defending Class D champion Avon Braves had another big test on Friday night and once again they proved they will be the team to beat.

Thomas Welch had 153 yards on the ground on 26 carries and QB Andrew Rowland added 182 yards rushing on 22 totes, while the Avon offense racked up over 500 total yards as the Braves pulled away from Caledonia-Mumford/Byron-Bergen for a 26-6 win on Friday night.

Rowland was also 7-of-12 through the air for 98 yards, while both he and Welch finished with two rushing touchdowns each as Avon broke open a close game with 19 unanswered points in the second half.

In all, Avon finished with 516 yards to total offense, while the Braves held to Raiders to just 134 on the night.

The second half was all Avon.

Welch had a four-yard score early in the third quarter for a 13-6 lead after the kick failed, while Rowland added a nine-yard TD run and an 18-yard TD run in the fourth for the final score.

Rowland and Welch each added interceptions on the defensive end.

Jake Cappotelli had 62 yards rushing on 17 carries for the Raiders, who struggled running the ball against Avon’s massive front line, averaging just 2.1 yards per carry.

Cappotelli also had a big night on defense with 17 total tackles, while Bobby Poles-Harrison added 11 in the losing effort.

Adam Mariani had 6.5 tackles to lead the Avon defense, while Shane Ellsworth had six and Nolan Clar chipped in with five.

The Oatkan Knights’ defense was on full display as they forced four fumbles, recorded a pair of interceptions and had two defensive scores in the absolute domination on Friday to move to 3-1.

Jack Tonzi paced the defense with eight tackles, Tyler Strollo finished with six tackles and an 11-yard fumble return for a score and Robbie Newmark had a 21-yard interception return for a touchdown in the easy win.

Tony Piazza had a big night on the ground in the win as he finished with 117 yards and two touchdowns on just 12 carries, while Strollo added 108 yards rushing on just six totes.

Chris Shearing was 10-12 for 236 yards and a touchdown through the air and LetSaw/Perry racked up over 400 yards of total offense for its second straight blowout win.

LetSaw/Perry scored 21 points in the second quarter to open up a 28-0 lead at halftime and cruised from there.

LetSaw/Perry also rushed for 182 yards, led by 80 and a touchdown on just eight carries from Bailey Schell. Eli Franklin carried the ball seven times for 43 yards and two scores, while Shearing and Braeden Wolfanger each added touchdowns on the ground.

Ethan Schroder had a big night receiving in the win, catching three balls for 93 yards and a score, while DQ Johnson-Meyers added a pair of catches for 57 yards.

Blaise Leone led another strong defensive effort for LetSaw/Perry with 5.5 total tackles, while Schroder had five stops, Archie Shearing finished with 4.5 stops and Tucker Owens added three. LetSaw/Perry gave up just 147 yards in all, including just 23 yards through the air on the night.

Connor Gorton had 62 yards and a touchdown on 22 carries in the losing effort for Whitman/Bloomfield.

AJ Brotz led the way receiving with six grabs for 101 yards and three scores, while Keian McRae finished with eight carries for 81 yards and a score. Jordan Miller-Vogt added 65 yards on 11 carries with a two-point conversion run.

Wyatt Kauffman had 102 yards and a touchdown on the ground and Attica rushed for 284 yards in all in the tough loss to a strong Bombers team.

Landon Thomas added 11 carries for 96 yards and QB Jake Dressel finished with 15 carries for 52 yards in the losing effort.

The Blue Devils defense was led by Jeremiah Donohue, who finished with 10 total tackles. Kauffman added nine stops and Andrew Newell chipped in with seven stops.

Sophomore QB Bodie Hyde ran five times for 61 yards and three scores and was also 3-for-5 through the air for 119 yards and two more TDs as the Aggies remained unbeaten.

CJ Gottler was a force on the defensive end for OAE with seven tackles, including five for a loss, with Cusmano adding seven stops as well, two coming for a loss.

TJ Andrews led the way for the Aggies with nine tackles — two for a loss — with Kaden Cusmano finishing with five tackles, a forced fumble, a fumble and a blocked punt and Connor Scott adding a punt block return for a score.

“We feel like we did a better job playing a complete game for four quarters than we did a week ago,” O-A/Elba head coach Tyler Winter said. “Hats off to York/Pavilion. Their boys played much harder than the score may suggest. Some minor things to learn from and improve as we get ready to host CMBB.”

Carl Szczech had another nice night for Y/P with 98 yards on the ground and a TD on 17 carries, while Jake Pangrazio went 11-of-19 through the air.

Tyler Brady paced the Y/P defense with seven tackles and Maverick Coffey added five stops, including one for a loss, for the Golden Knights.

“Hats off to OAE, that is a good team that should be competing for a sectional title this year,” Y/P head coach Kurt Schneider said. “We learned a lot tonight and we know we have a lot of things we need to clean up to get to that level. All we can do is get back to the grind and take each day as an opportunity to improve and get better and go from there. There were moments when we moved the line and got a push, we just need to work on being more consistent and not shooting ourselves in the foot with costly penalties or turnovers. We will continue to grind and it’s on to the next one.”

Nick Kramer had a huge night at QB and the Trojans’ defense was impressive yet again as they bounced back from a tough loss to Avon last week with the blowout to move to 3-1.

Kramer was 8-of-10 passing for 139 yards and three TDs, with Jake Laney catching six balls for 100 yards and all three scores. Kramer also added a 12-yard touchdown run. Kramer’s TDs to Laney came from 42, 20 and 12 yards as Alexander opened up a 21-0 lead early in the second quarter.

Brayden Woods led the Trojans in rushing with 46 yards on four carries. Tyler Marino had 45 yards on five carries, while Clayton Bezon, Ricky Townley and Mason Bump all had over 30 yards rushing on three carries each. Woods, Bezon and Bump all had touchdown runs as Alexander scored on all seven of its possessions on the night.

Bezon led the Trojans defense with six tackles, while Laney and Kramer each had five stops; Kramer also added a sack.