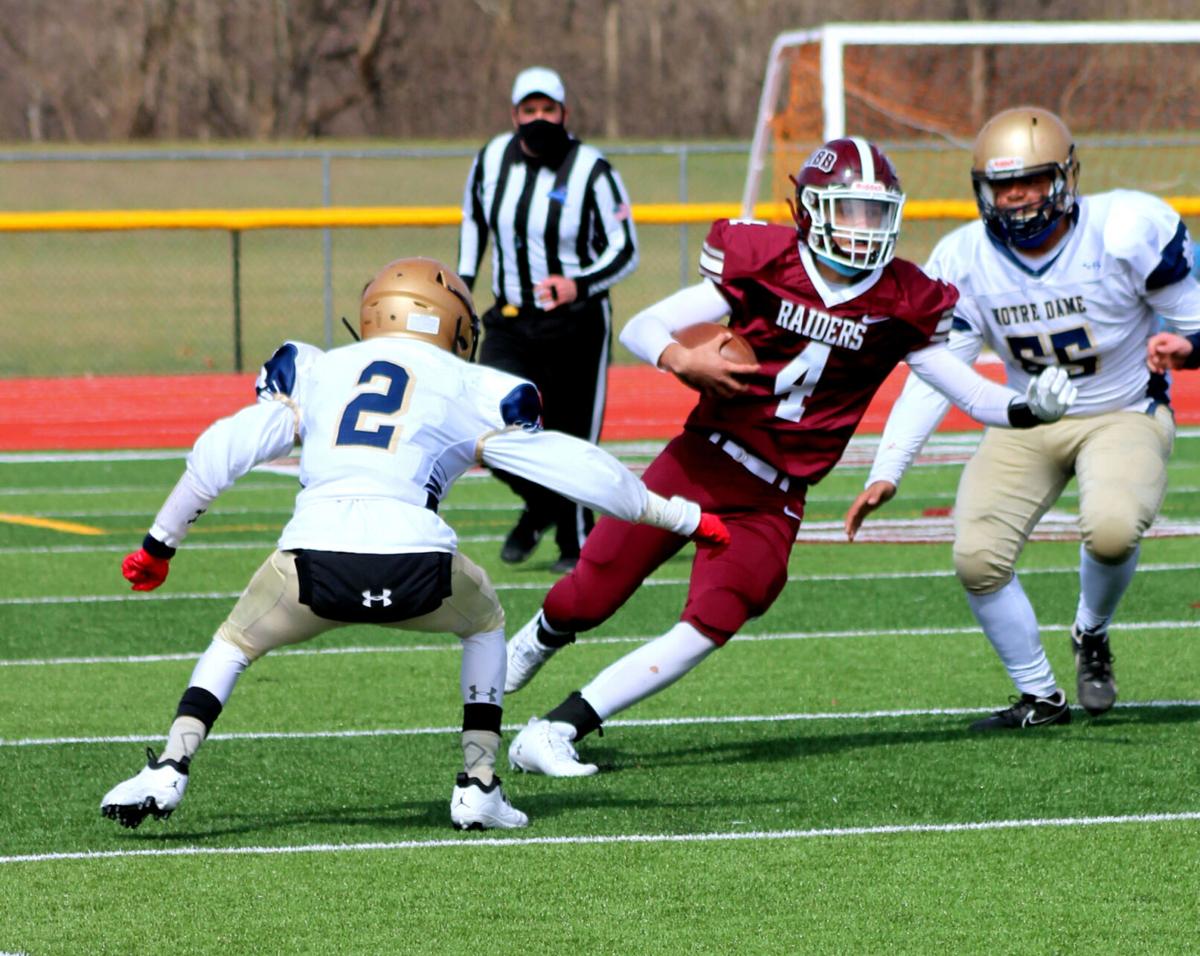 Cindy Cassada/For The Daily News | Kyle Wade ran for two touchdowns and came away with two interceptions in C-M/B-B’s win over Notre Dame on Saturday. 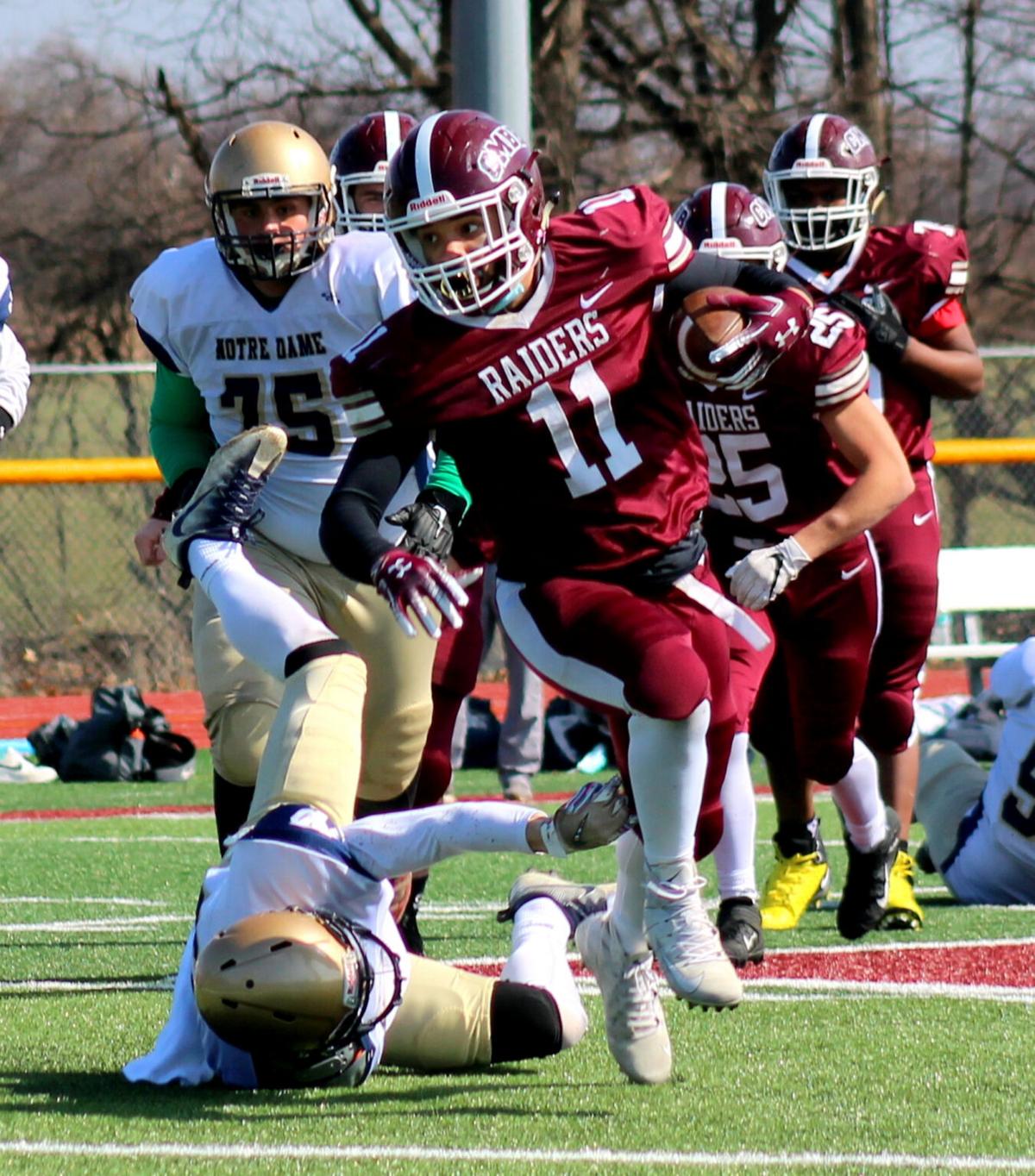 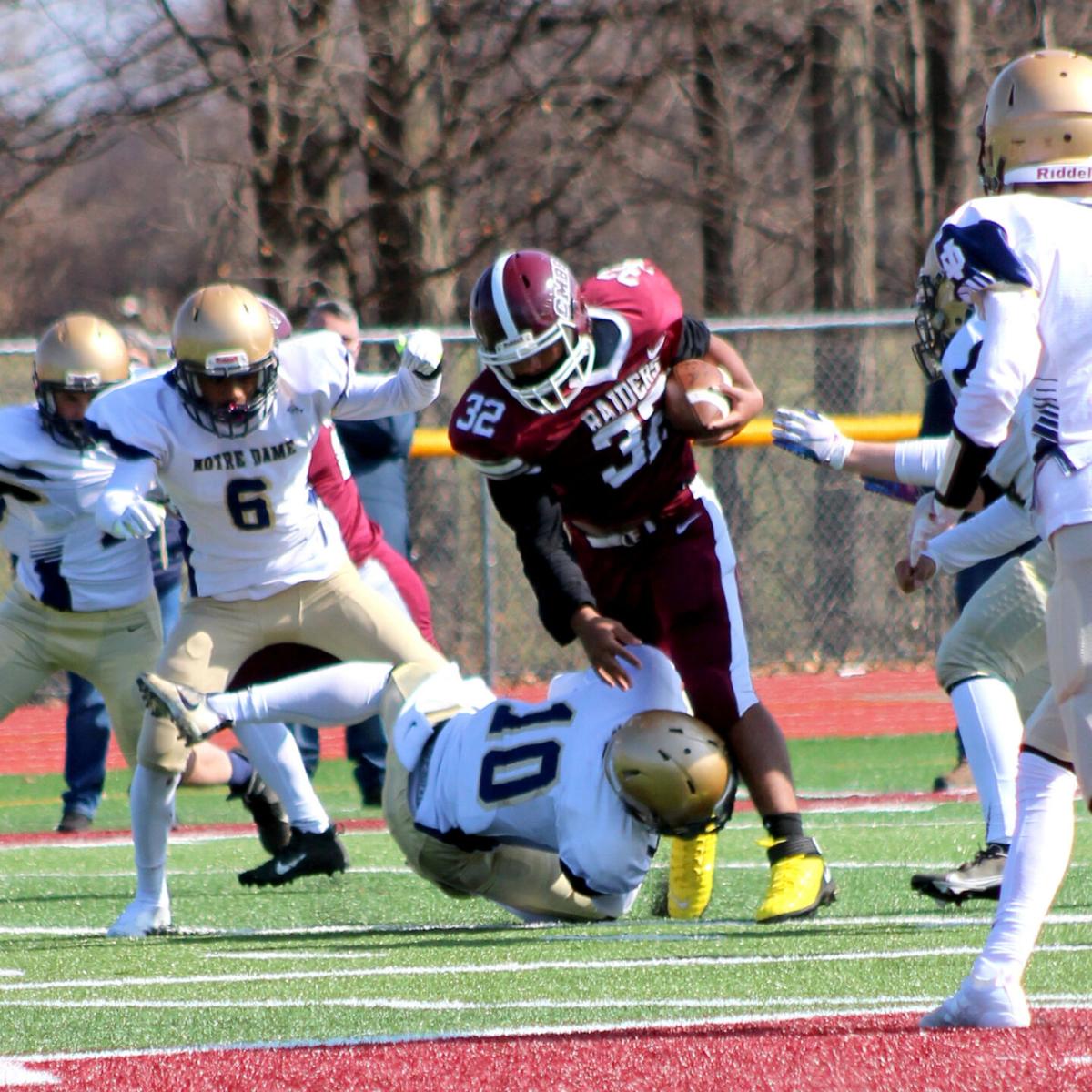 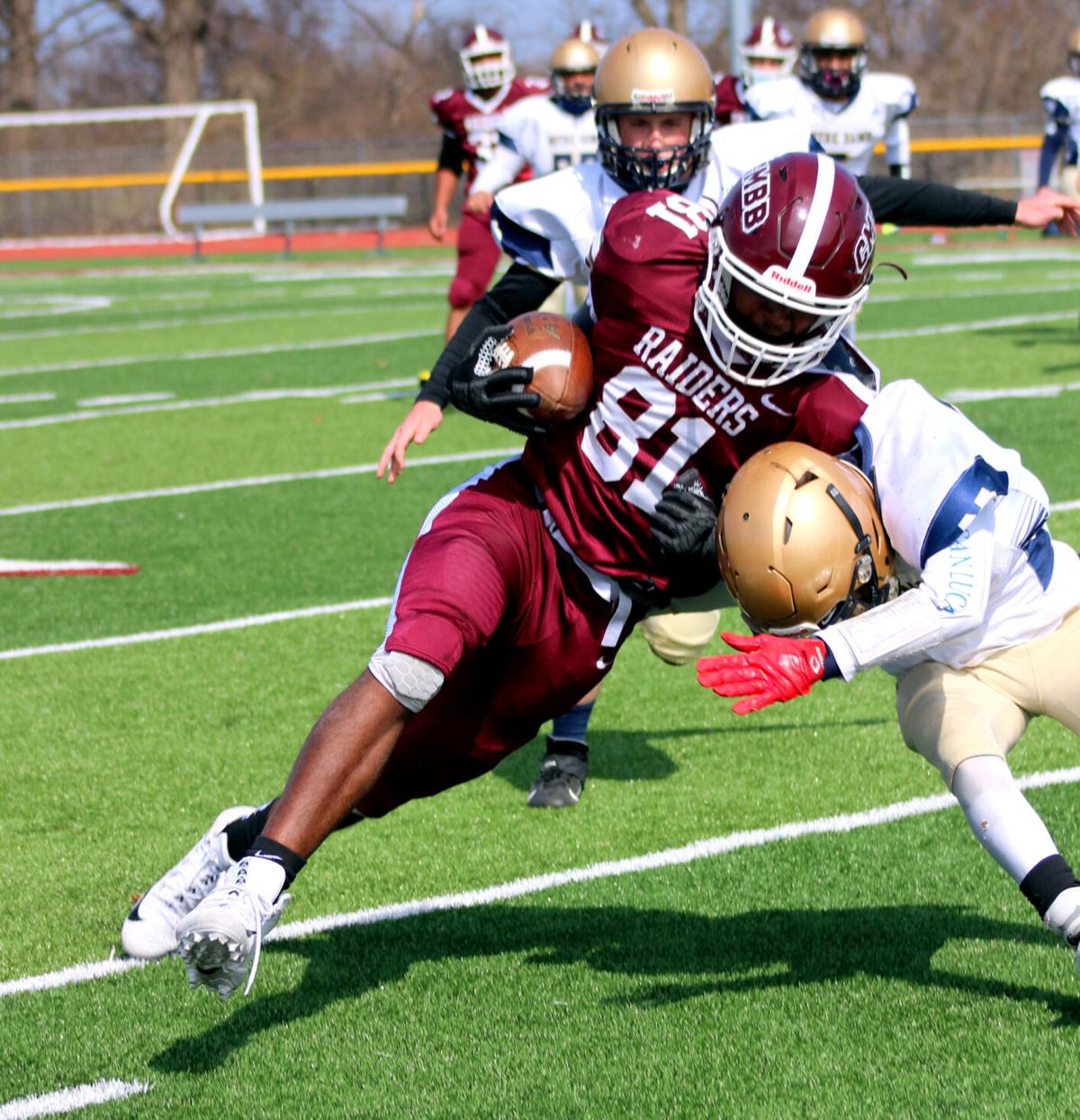 Cindy Cassada/For The Daily News | Mark Poles-Harrison is tackled by Tony Zambito after making a catch and run on the Raiders’ way to the end zone.

Cindy Cassada/For The Daily News | Kyle Wade ran for two touchdowns and came away with two interceptions in C-M/B-B’s win over Notre Dame on Saturday.

Cindy Cassada/For The Daily News | Mark Poles-Harrison is tackled by Tony Zambito after making a catch and run on the Raiders’ way to the end zone.

CALEDONIA — Going up against defending sectional champion Notre Dame on Saturday, Cal-Mum/Byron-Bergen was in major need of a win.

That’s exactly what they got, as a big performance from junior quarterback Kyle Wade propelled the Raiders to a 16-8 victory at Hamilton Field.

“This was a huge win,” said Cal-Mum/Byron-Bergen head coach Billy Donegan. “Having such a young team, we needed a win to help improve our focus and energy (after a loss last week) as we look to face the next challenge.”

Wade finished the game with two rushing touchdowns along with two interceptions on defense to lead C-M/B-B past a banged-up Irish squad.

“We all know what a talented athlete Kyle is,” said Donegan. “But what we really like is how he helps to make those around him better.”

Notre Dame was without starters, junior Conner McWilliams and senior Donato Fiorentino. McWilliams suffered a wrist injury in Week 1 that will cause him to miss the rest of the season, while Fiorentino was out with a non-COVID-related illness and is expected back next week. Senior wide receiver Mark Sanders Jr. was limited on Saturday and starting quarterback, junior Colin McCulley left the loss to C-M/B-B in the fourth quarter with a leg injury and is expected to miss at least next week’s game.

There were several contributors other than Wade who played a role in the Raiders’ win. Including junior receiver Mark Poles-Harrison who came away with a few big catches on C-M/B-B’s first touchdown drive and followed that up with, what turned out to be the difference in the game, a safety that put the Raiders ahead 10-8 in the third quarter. Senior Xavier Thomas also had a big afternoon defensively and led the team with 10 tackles.

“Our defense has been coming up big with some timely turnovers and plays,” said Donegan. “We have developed a bit of a bend but don’t break mentality.”

Junior punter Scott Essig also played a significant role in the win, booming punt after punt to set the Irish back with unfavorable field position.

It was a slow go for both offenses, as the Raiders and Irish managed just 173 total yards and 172 total yards, respectively.

Dylan Warner led Notre Dame with 14 carries for 68 yards while coming away with 10 tackles on defense. Vincent DiRisio also made 10 tackles for ND.

The Irish scored their lone touchdown with 2:32 remaining in the first quarter as McCulley found senior Alonso Storey from one yard out. That was all she wrote for Notre Dame, which falls to 1-1.

The Irish have a tough matchup with 2-0 Avon coming up next week. The game will be streamed LIVE on the Batavia Daily News YouTube Channel on Thursday at 6 p.m.

Cal-Mum/Byron-Bergen improves to 1-1 and looks ahead to a matchup with Clyde-Savannah (1-1) on Friday.

“Fortunately, we have an experienced coaching staff and some emerging leaders who can set expectations and hold us accountable as we move forward,” said Donegan as his team moves into the meat of the regular season.