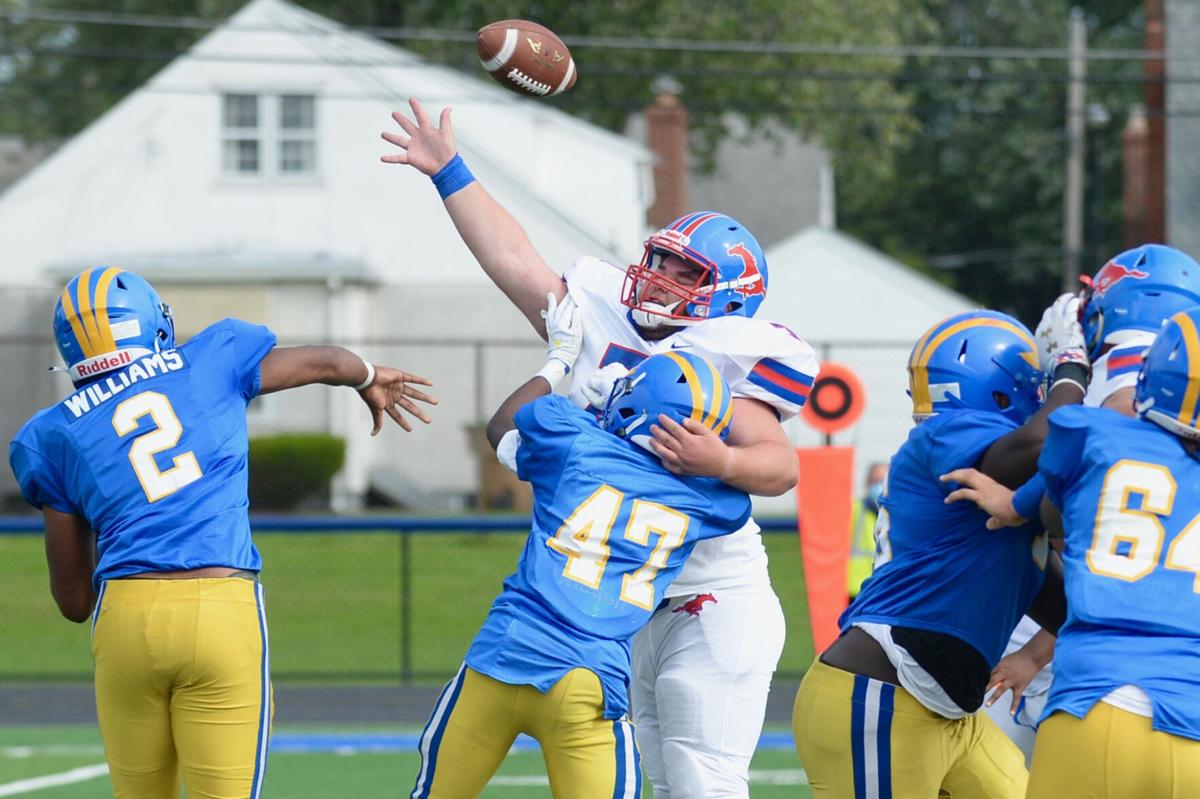 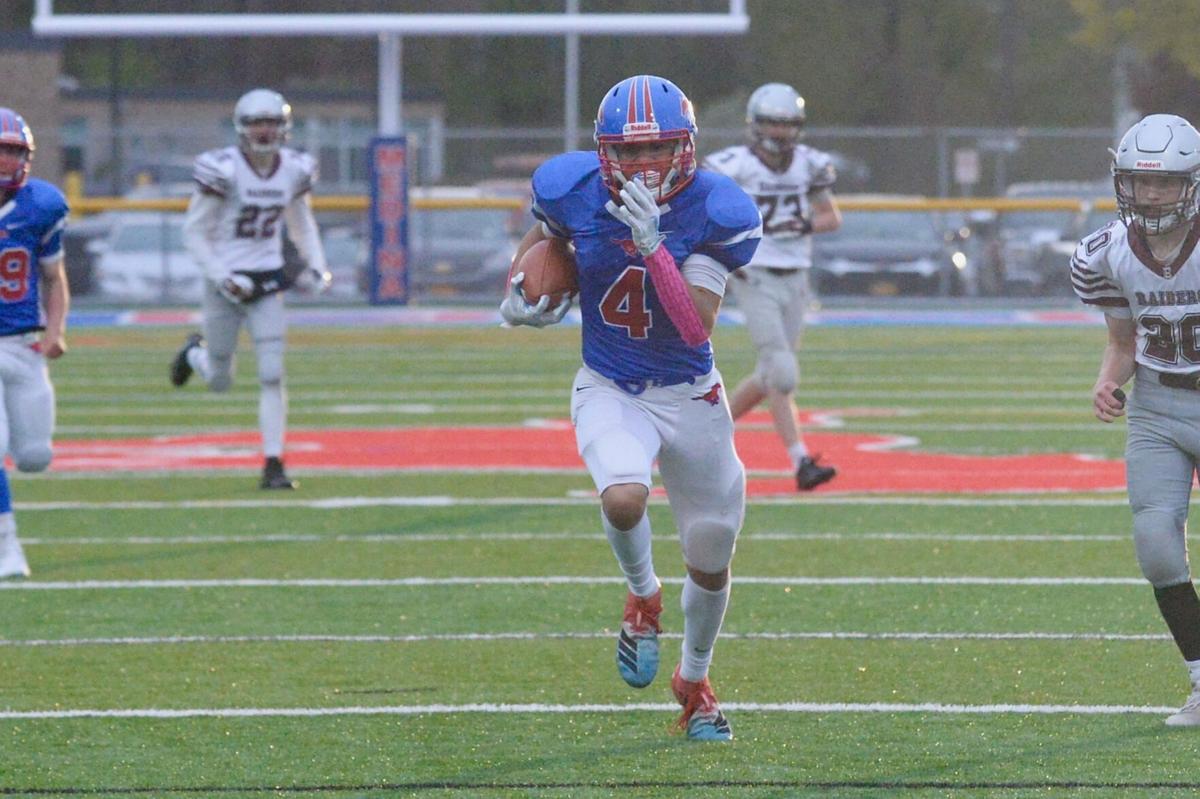 File Photo Medina will take on Tonawanda on Thursday before matchups with unbeaten Akron and Albion. 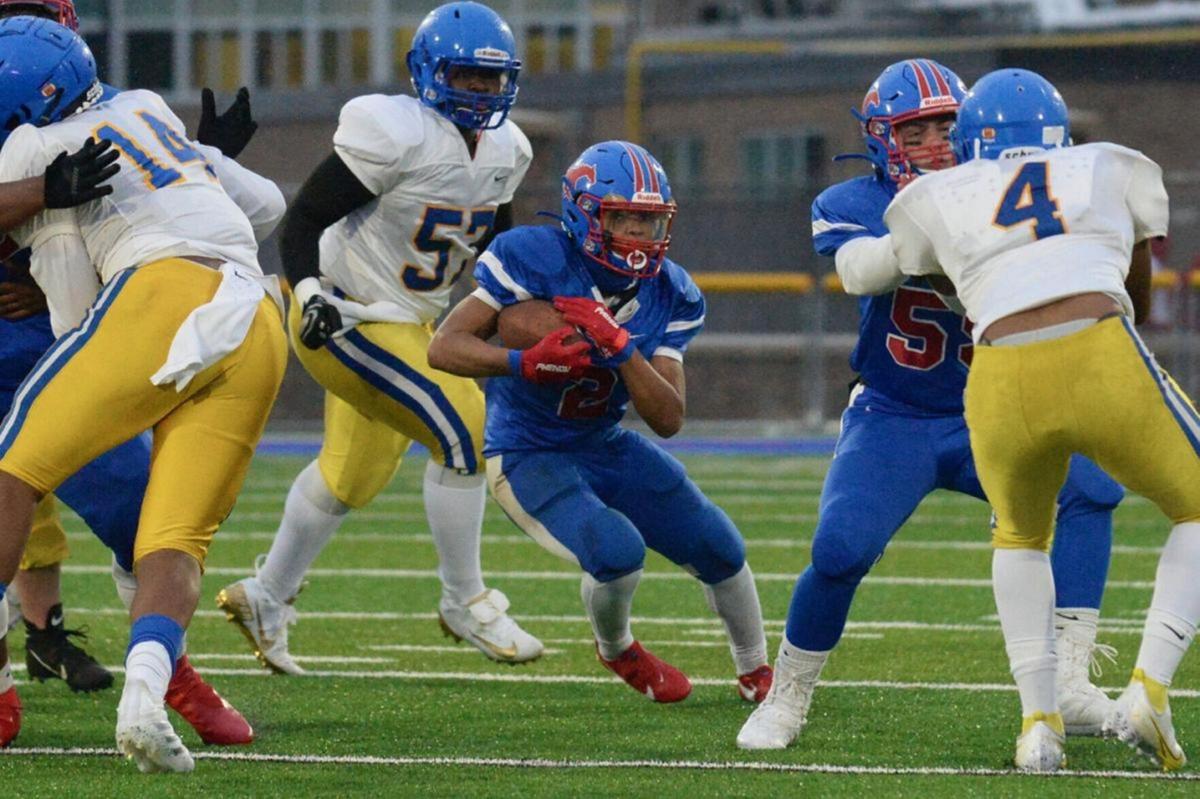 File Photo Medina looks to remain beaten on Thursday night before big games with Akron and Albion to close the regular season.

File Photo Medina will take on Tonawanda on Thursday before matchups with unbeaten Akron and Albion.

File Photo Medina looks to remain beaten on Thursday night before big games with Akron and Albion to close the regular season.

MEDINA — Perhaps midway through another undefeated season, and with two big games to close the regular season, Medina has gone into a bit of ‘coast mode’ recently on the way to trying to defend its Section VI Class C title. Though a lot of that has to do with the Mustangs battling a large amount of injuries.

Through the first four weeks of the season, the Mustangs were hardly tested and they didn’t appear as though they would be last week either, but Wilson had other ideas. Up just 18-13 at halftime, Medina shook off a lackluster start to score 26 unanswered points in the second half to eventually cruise to a 44-13 win.

Now, with a busy schedule coming up to close the season, the Mustangs will have to try and not to look ahead.

In the first of three games in nine days, Medina will host winless Tonawanda on Thursday night as it will look to move to 6-0 before matchups with undefeated Akron (Oct. 18) and rival Albion (Oct. 22); the Mustangs will be at Akron and will host the Purple Eagles.

“With three games in nine days our biggest concern is to be as healthy as possible going into the playoffs,” Medina head coach Eric Valley said. “It can be overwhelming to look at the schedule so we are just concentrating on one play at a time. We had some injuries last week, and had some younger players step up and get some quality playing time.”

Winners of 11 in a row dating back to last season, Medina is currently tied atop the Section VI Class C North standings with aforementioned Akron, with both at 3-0 in division play. Akron will get more of a challenge in its sixth game than Medina as it will meet 4-2 Franklinville/Ellicottville on Thursday as well. FEville has won three of its last four games but is coming off of a narrow loss to Clymer/Sherman/Panama.

For the Mustangs, they needed another monster game from senior quarterback Xander Payne to pull away from the Lakemen last week. Payne was 10-of-17 for 171 yards and four touchdowns, with TD passes going to Joe Cecchini, Greg Thompson, Iverson Poole and Cayden Lilleby.

Behind Poole’s 110 yards and a TD on just 16 carries, the Medina rushing attacked was solid as well last week as the Mustangs totaled 227 yards on the ground on 25 carries with three TDs, aided by a 56-yard touchdown run from wide receiver Jarin Rhim.

Though the Medina defense was stout against the pass last week, holding Wilson QBs Drew Dabill and Tyler Yousett to a combined 6-of-24 for just 59 yards and an interception, the Lakemen running attack was able to get going. Wilson ran for 164 yards on 30 carries, which could prove to be a problem for the Mustangs down the road against good running teams in Akron and Albion.

Medina has now outscored its opponents 210-41 on the season.

In Tonawanda the Mustangs will get an 0-6 team but with two of those losses by just one score, with two more coming by 14 points or less. The Warriors are coming off of 20-14 loss to Akron on Saturday.

On the season Tonawanda has been outscored 170-49, which includes a 48-0 loss to Wilson and a 46-6 setback to Iroquois. The remainder of the Warrios’ games have been relatively close.

“This week, we get a couple of key players back in the lineup, so we want to get them some quality reps again to regain some depth in our lineup,” Valley said. “Tonawanda has always been very physical up front, and I expect them to do the same tomorrow night. We need to play good defense, execute on offense, and minimize mistakes.”

The Tonawanda offense will be led by senior quarterback Zach Wood, who has had a solid season with 323 yards and two TDs on the ground on just 52 carries. Wood has also gone 40-of-81 through the air for 527 yards and three touchdowns, but with five interceptions.

Seniors Shane Conley and Dylon Grudner each have 10 catches for the Warriors, with Grudner leading the way with 211 yards and a score.

Alex Gallo (20 tackles), Mike Thomas (22 tackles), Conley (17 tackles), Drake Badner (16 tackles) and Grudner (13 tackles) all lead a defense that has played well at times, outside of the losses to Iroquois and Wilson.

Despite not playing last week, Noah Skinner still leads the team with 355 yards and three touchdowns on just 34 carries, while Poole is up to 229 yards rushing, with Robert Arnold at 178.

For upcoming Albion, the Purple Eagles are coming off of two wins in five days — a 28-8 win over Burgard and a come-from-behind 16-14 win over Cheektowaga on Saturday.

Before the showdown with Medina, the Purple Eagles will get a big test this Saturday with 4-2 WNY Maritime.