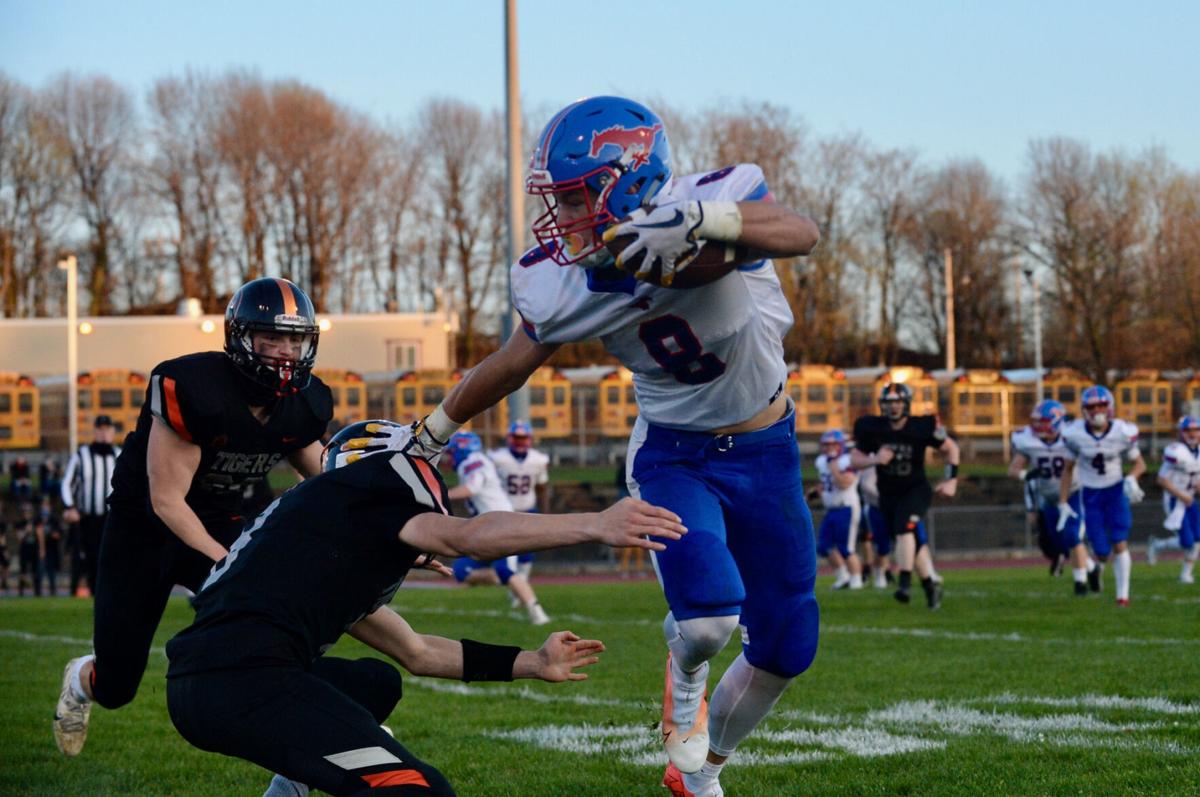 Alex Brasky/Batavia Daily News Brian Fry throws a stiff arm on an Akron defender during a game earlier this season. 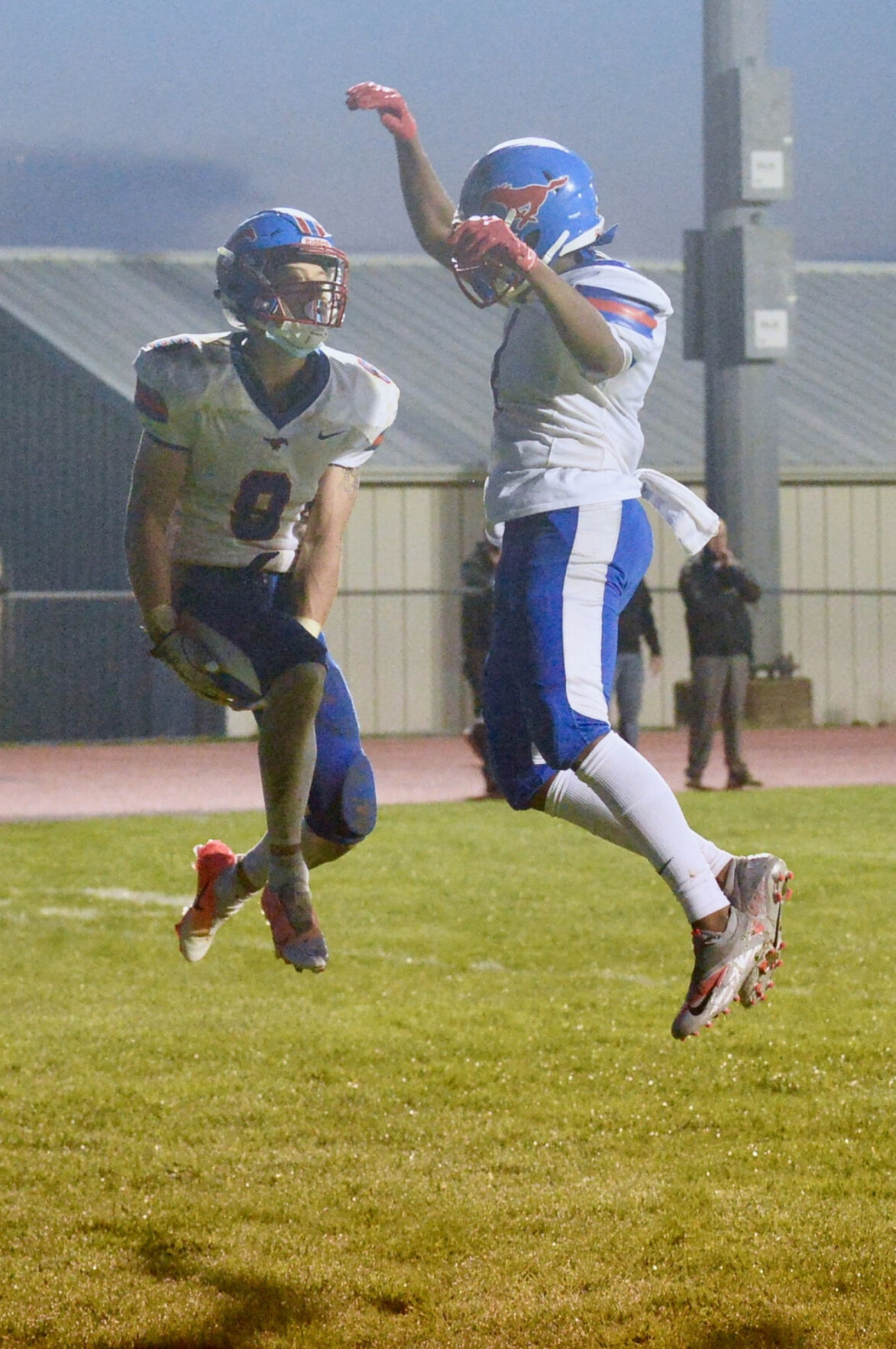 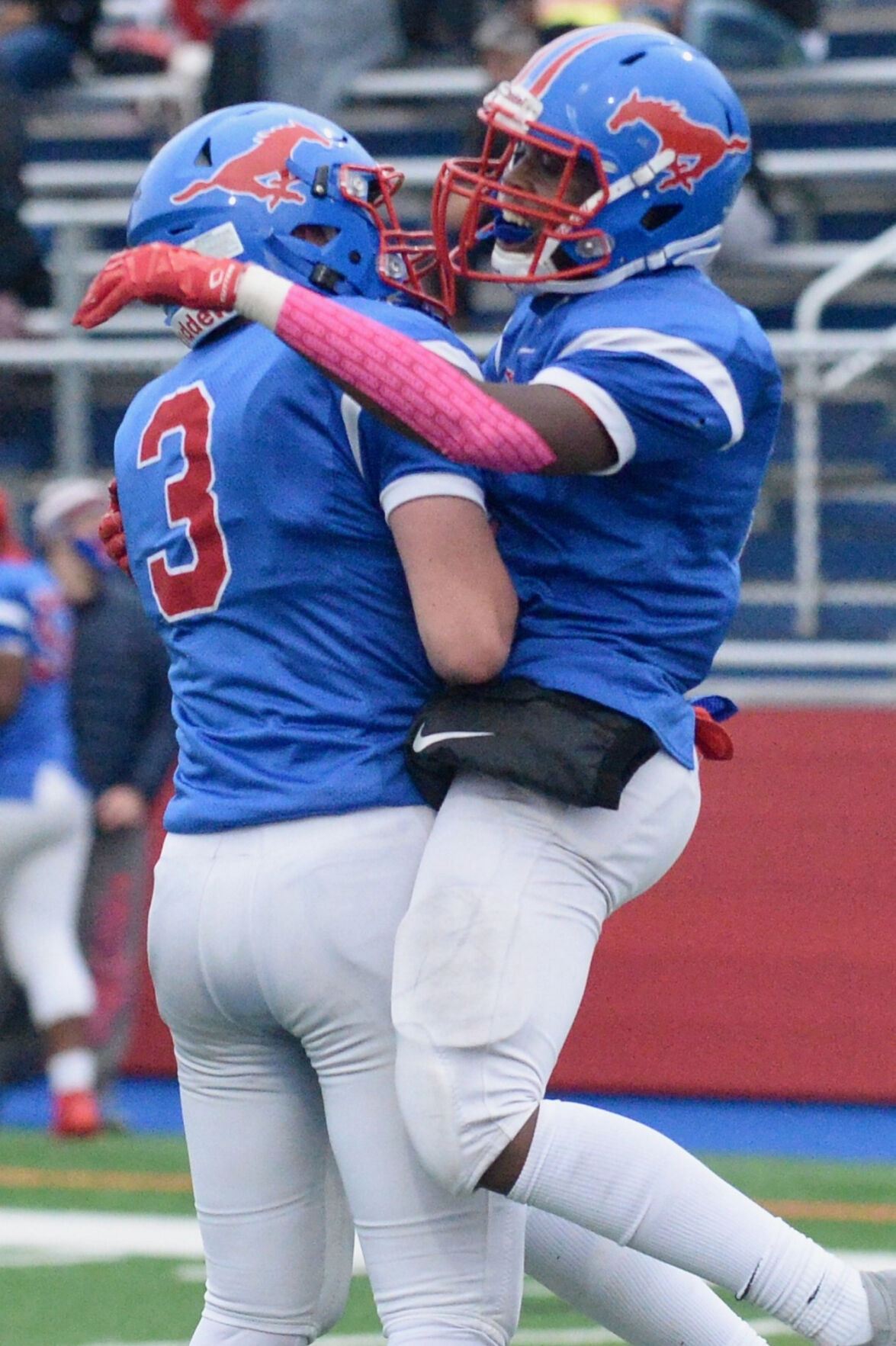 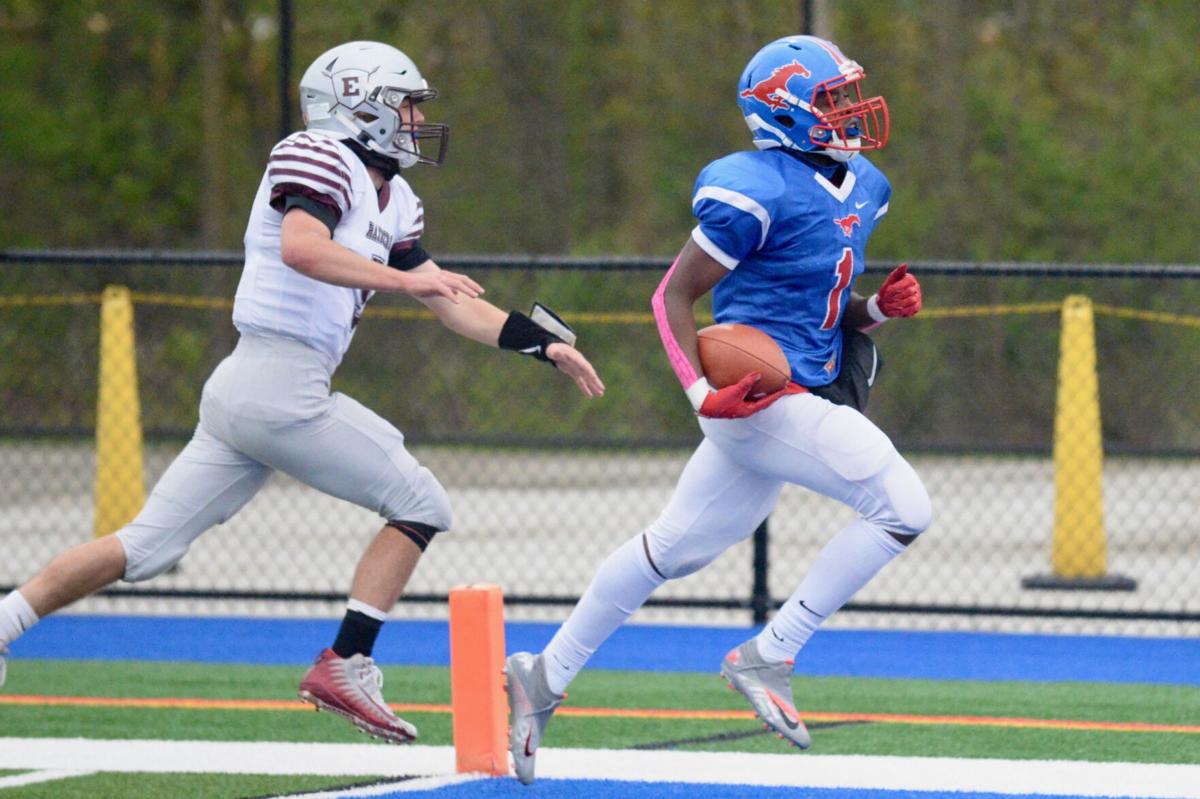 Alex Brasky/Batavia Daily News Tyler Chinn takes it across the goal line to finish off a 47-yard catch and run.

Alex Brasky/Batavia Daily News Brian Fry throws a stiff arm on an Akron defender during a game earlier this season.

Alex Brasky/Batavia Daily News Tyler Chinn takes it across the goal line to finish off a 47-yard catch and run.

MEDINA — For the Medina football program and Mustangs fans alike, Friday night has been a long time coming. It has been since 1988 that Medina was last in a Section VI championship game, the same year that the Mustangs won their last sectional block.

All that patience and hard work could finally pay off for the Mustangs tonight, but it certainly won’t be easy.

No. 2 seed Medina will host No. 3 and perennial power Southwestern in the Section VI Class C title game at 7 p.m. at Veterans Memorial Park.

The Mustangs have simply dominated their way through the spring, Fall II season and that continued last week with an absolute destruction of Eden/North Collins, 54-6. Meanwhile, the Trojans got all they could handle from top-seeded Clymer/Sherman/Panama in a 24-21 victory in the other semifinal.

In Southwestern, Medina will get a program that is no stranger to success in recent seasons. The Trojans have won five Section VI championships, all coming since 2004, when they won the Class B title. All four of Southwestern’s other sectional blocks — 2008, 2009, 2007 and 2019 — have come in Class C.

Southwestern also owns a pair of New York State Public High School Athletic Association titles, coming in back-to-back fashion in 2008 and 2009. In 2019, following a blowout win over a quality Letchworth/Warsaw team in the Class C Far West Regional Final, Southwestern went on to be edged 35-28 by eventual Class C champion Susquehanna Valley in the semifinals.

And though all that may be in the past, Medina head coach Eric Valley knows that a lot of that success has carried into this spring, as the Trojans feature yet another talented squad.

“Southwestern runs a top notch program, and have multiple sectional and state championships to prove it,” Valley said. “This year they have multiple weapons and some very athletic kids. Their QB is great at extending plays with his legs and has the ability to throw all over the field.”

That quarterback is junior Aidan Kennedy, who has had a spectacular season under center. In just five games — like Medina, Southwestern had a game cancelled as well — Kennedy has gone 63-of-104 for 1,074 yards and 15 touchdowns against just three interceptions. Kennedy has also done it on the ground as well, running for 203 yards and four touchdowns on 42 carries.

Southwestern has a quartet of talented pass-catchers who each have over 100 yards receiving and double-digit catches, but the group is led by the senior duo of Nate Johnson and Garrett Swan.

Like they have in the past, Southwestern can also get it done on the ground, led by senior Zishan Munir, along with Kennedy. Munir leads the Trojans with 428 yards rushing and six touchdowns on 75 carries this season. In all, Southwestern has rushed for 752 yards this season with an average of over five yards per carry.

Until last week, Southwestern’s season was much along the same lines as Medina. Each of their first four wins came by at last 19 points, while the Trojans rolled to 4-0, winning their games by an average of nearly 37 points per game.

However last week the Trojans needed to hold on for dear life. Southwestern built a 17-6 halftime lead but eventually needed to run out the final six-plus minutes of the game against CSP to advance to the championship.

“Last year we were in the Bs and they were in the Cs so we didn’t see much film on them,” Valley said. “I know they graduated some really good players, but they have a solid core that returned.”

The Southwestern defense, which has allowed just 10.4 points per game this season, has been a balanced group, led by a trio of seniors in lineman Drew Wigren and linebackers Calvin Ricker and Johnson.

Seniors Gaven Dewey, Swan, Tyler Williams and Munir, junior Ashton Mathews and sophomore Matt Pannes all have double-digit tackle totals for a defense that has forced 13 turnovers this season.

“We know that they match up well with our athleticism,” Valley said. “We know that we need to be physical up front, continue to spread the ball around on offense and play disciplined defense. Staying focused and eliminating mistakes with be our key to success.”

Southwestern also comes equipped with a solid kicker as well, as freshman Neves Hoose has made 23-of-26 PAT attempts this season, while also connecting on 3-of-4 field goal attempts, with a long of 39; Hoose connected on a field in the semifinals last week.

As it has all season, Medina will attack with an explosive offense and a bone-crushing defense, the combination of which isn’t seen very often.

The Mustangs’ offense averages a whopping 44 points per game, while the defense is surrendering just 3.8 points per contest. Medina has a pair of shutouts this season, while the seven points they allowed to Akron in Week 2 was the most they allowed in a game all season.

To counter Southwestern’s quarterback, Medina comes in with a dynamic signal-caller of its own in junior Xander Payne. Payne has been impressive, going 53-of-81 through the air for 938 yards and 15 touchdowns against just three interceptions.

Fry has been outstanding on the ground all season as he has already amassed 628 yards and seven touchdowns on just 63 carries (10 yards per carry). Senior Corey Saj has also got into the mix with 21 carries for 209 yards and a score, for a team that has rushed for 1,016 yards this season at nearly eight yards per tote.

The stout Medina defense has seven players in double-figures in tackles, led by linebacker Fry, who has 28 to go with two interceptions.

Sophomore Noah Skinner has 24 tackles, including five for a loss and a sack, while sophomore Chris Johnson has 18 stops, including two for a loss.

Cecchini leads the team with five sacks, while Rhim has three and Zach Oliver has two, with Chinn and Hayden Woodroe each also having two interceptions. In all, the Mustangs’ defense has forced 12 turnovers this season.

In one of the few aspects of the season that has been the complete opposite from Southwestern, Medina has yet to attempt either a point after attempt kick or a field goal this season.

For Valley, he has said all season long that he has wanted this team to be remembered for more than just the team that played during the unique, COVID-19 spring season. Valley knows how good they are and he knows what one final victory this season would mean.

“A win would be huge for these kids and this community,” Valley said. “This group of young men played on successful youth and JV teams. For them to continue that success on a bigger stage would be a tremendous reward for them and all their coaches over the years. We also know that it won’t come easily, as this will be the toughest game any of them have ever played in.”

It’s been a long 33 years since the Mustangs beat rival Albion for that Class B2 title way back in 1988. Now they have 48 minutes to make everyone forget the last three-plus decades.