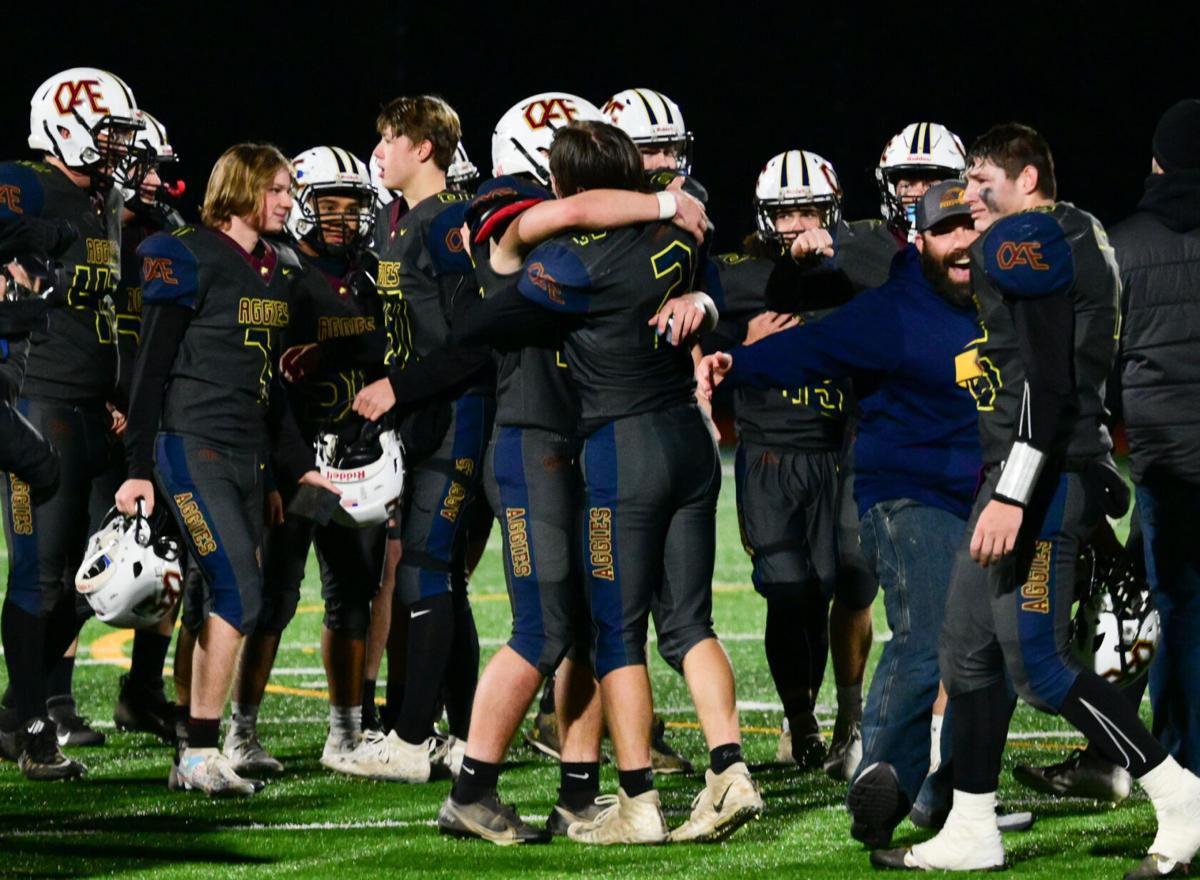 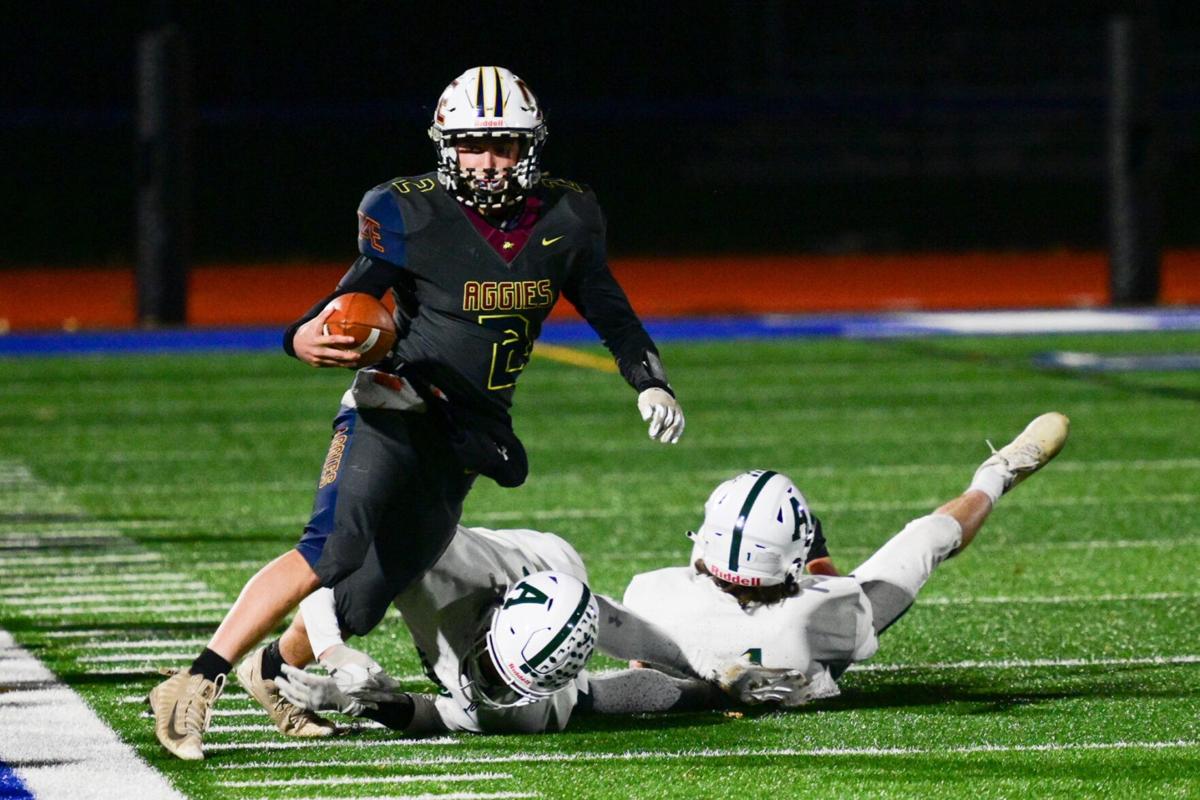 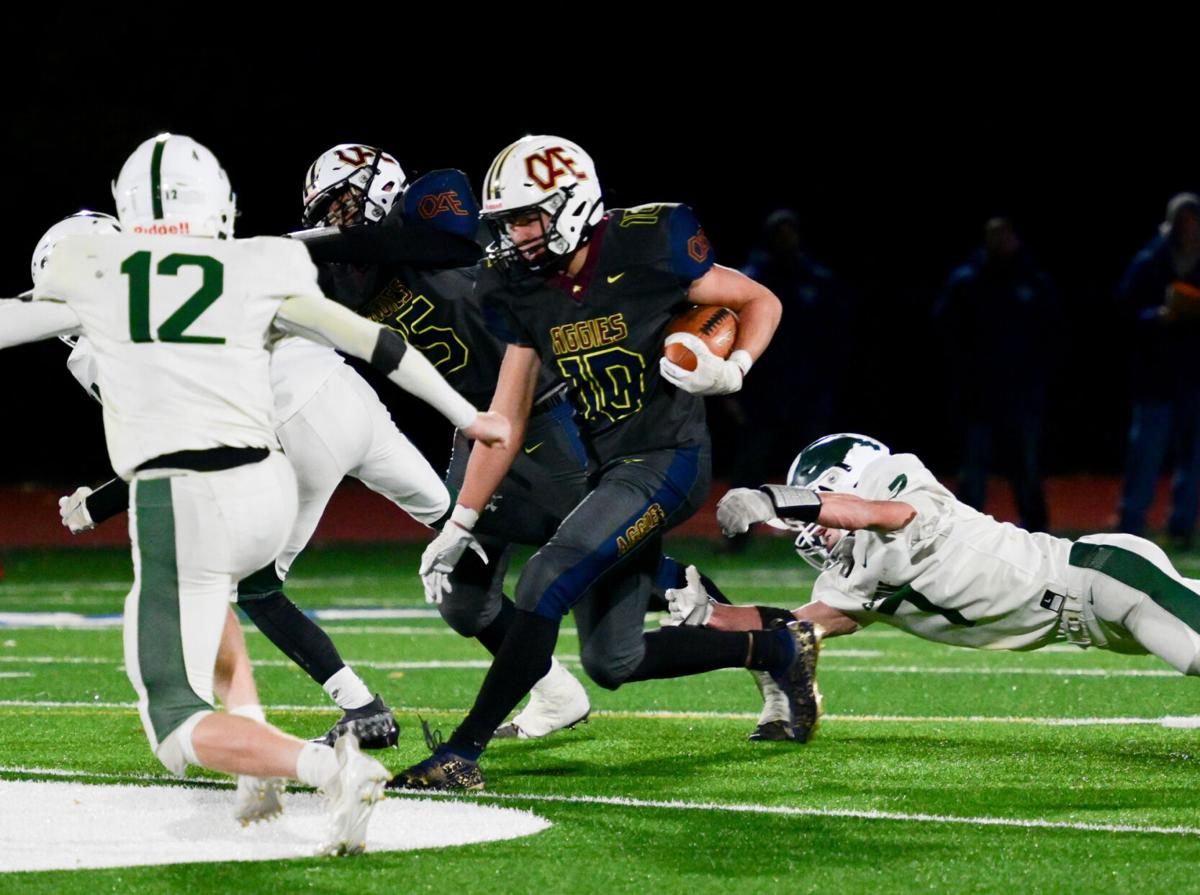 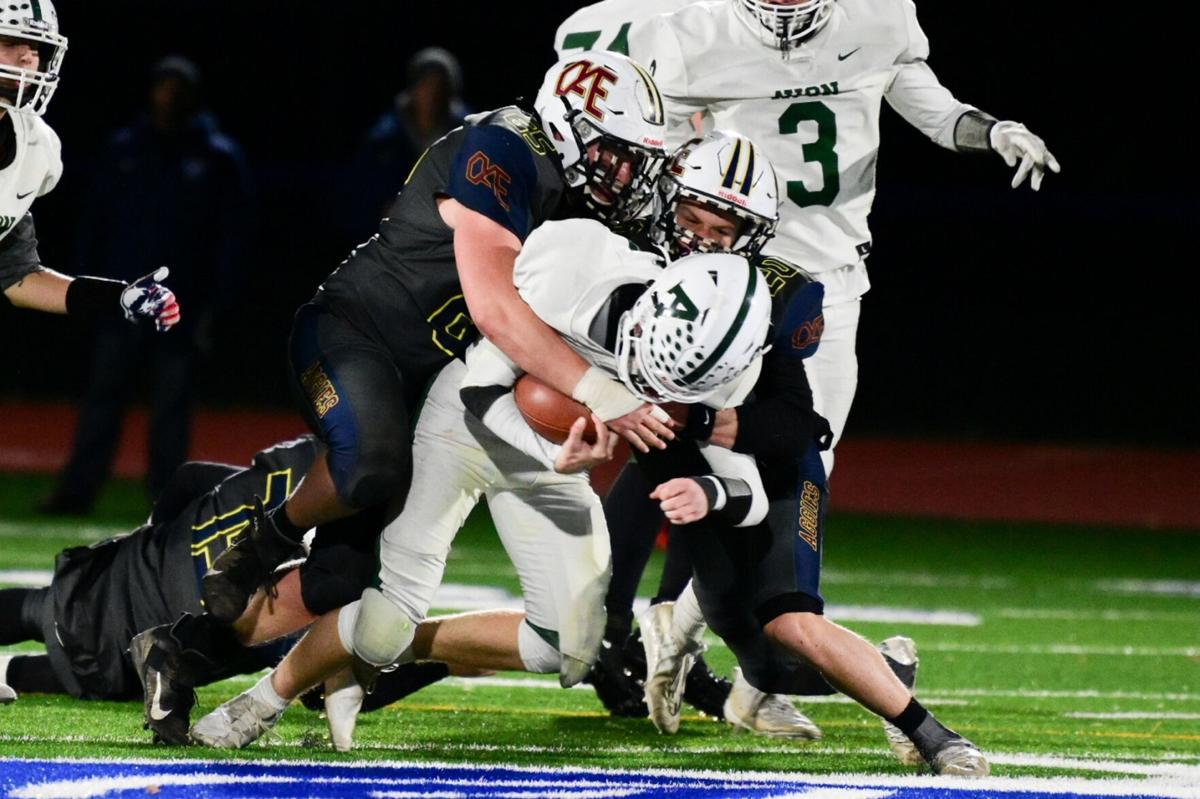 OAKFIELD — The Oakfield-Alabama/Elba football team has been in this position before. No, not a Far West Regional final against a perennially strong Section VI team, but about to play a big-time football game with plenty of people not giving them much of a shot to win.

Despite being undefeated, the No. 1 seed and having already beaten Avon once this fall, many thought that the Aggies were the underdog last week to the defending Class D champion Braves. Instead, O-A/Elba made all the big plays when it needed to as it came away with its third sectional title in four years — with the first two coming in eight-man in 2018-19.

“It’s one of those things where you’re proud of them and you’re happy for them but I don’t think anyone here is shocked,” O-A/Elba head coach Tyler Winter said of his time. “It’s been one of hardest-working groups that I’ve ever been around as a player and as a coach. They did everything in this offseason to put themselves in the position to win big games like a sectional championship. They were able to draw from those experiences in the weight room, in camp, in doubles. They were able to use those experiences leading up to the season to motivate them in times of adversity and they were able to get the job done.”

Now they Aggies will get another huge test — they’ve passed every other one put in front of them this season — when they face Section VI Class D champion Randolph in the Far West Regional final for a chance to advance to the New York State final four. Kickoff is set for 5 p.m. on Friday at Jamestown High School.

For O-A/Elba, as special as last week was, it was time to move on.

“Friday was incredible, it was a once in a lifetime experience, but come Saturday morning we’re champions but it’s time to move on because we’ve got another game to play,” senior lineman CJ Gottler said. “Our focus has been at an all-time high and we’re ready to go win another one on Friday.”

In Randolph, the Aggies will be getting a perennially strong Section VI team that is consistently in the mix for a sectional block, though the Cardinals hadn’t reached the top since a three-season run of Class D blocks from 2012-14, which also included three straight NYS Class D crowns. That stretch capped a run of seven Section VI Class D titles in 12 seasons from 2003-14.

This season Randolph has been nearly has dominant as O-A/Elba, but especially so down the stretch,

Randolph will enter Saturday’s game at 10-0, having outscored its opponents 397-75, but recently it has been even more impressive. Over their last three games, the Cardinals have outscored their opponents 131-0, including a 26-0 win over Franklinville/Ellicottville last week in the Class D title game at Highmark Stadium. Take that back even father, since a somewhat tough 22-0 win over powerful Clymer/Sherman/Panama on Sept. 25, the Cardinals have been on a 228-21 run. Randolph hasn’t been tested since being up just 8-0 at halftime on CSP.

“We have a ton of respect for them, they are incredibly physical and they fire off the ball as good as any team we’ve seen,” Winter said. “I give them a lot of respect in that they don’t do much. They’re not a complex team offensively and defensively, They have a clear identity and they are just trying to be as good as they possibly can be in that identity. They play tough-guy football. And that’s something that we’re trying to replicate as well with our program.”

Randolph also had a pair of close games before the contest with CSP, as it trailed previously-mentioned Franklinville/Ellicottville 20-14 at halftime in Week 2 of the regular season, while they needed to pull away from Depew in the second half the following week.

Offensively it’s no secret as to what the Cardinals are going to try and do — they are going to run it and run it often. On the season they have rushed for over 3,000 yards on 413 carries at nearly 7.5 yards per carry, while they have thrown the ball just 27 times all fall.

Leading the way will be the fourth-leading rusher in all of Section VI in junior Xander Hind, who has rushed 212 times for 1,745 yards and 24 touchdowns, while he has also caught a pair of touchdown passes. Senior Luke Pagett has also been impressive on the ground for Randolph as he has rushed 84 times for 660 yards and 10 TDs. In terms of what the Aggies faced last week, it’s got very few similarities.

“They’re both physical football teams but I think they’re two different teams,” senior running back Gaige Armbrewster said about the comparison to Avon. “You take what worked worked last week and just move on to the next week.”

Randolph junior quarterback Carson Conley has gone just 13-of-27 through the air for 214 yards and four TDs, with just one interception, with Jaiden Huntington being the leading receiver with seven grabs for 125 yards and two scores.

Defensively, Huntington leads the way for a team that is giving up just 7.5 points per game with 83 total tackles, to go with two sacks and a pair of interceptions.

Pagett has also had a strong season with 65 tackles, while Payton Slade has 57 stops and Josh Bush has added 38. Maverick Adams leads the team with five sacks, while Ryan Carpenter, Sterling Skye and Elial Bryan all have three sacks.

Differently than O-A/Elba, Randolph struggled during the spring season as it finished at just 1-4.

“They’re a really good team and we always have to respect our opponent and we’re going to go into this game more ready than ever,” Gottler said. “We’re done with block season and now we’re ring chasing. We’ve got a new focus and we’re going to work as hard as ever.”

O-A/Elba will enter the weekend as one of the highest-scoring teams in Section V, having put up 518 points on its way to an 11-0 mark, though it hasn’t all been easy. Aside from last week, the Aggies also needed a big second half to pull away from Notre Dame earlier in the season, they needed to stop a two-point conversion attempt to hold off Bolivar-Richburg and they got a tough game from Avon the first time the two teams met this fall,

“We had a little criticism for that game being as close as it was but those were the moments that helped shape us on the journey to be where we wanted to be last Friday,” Winter said of the one-point win at B-R. “The reason these guys are still playing football is because they have an uncanny ability to compartmentalize each week and that hasn’t changed at all after winning the block.”

The players reiterated much of the same sentiments.

After falling short last season in a year that they were the No. 1 seed heading to the postseason, the Aggies were on a mission this season to erase those memories. Though despite getting to the top of Section V, they have no intentions of being done yet.

“It’s been high intensity and we’ve just been working super hard to get another win,” Kaden Cusmano said. “Right now we’re just looking at Randolph and hoping to get past them and just play for another week.”

Armbrewster has led the way for this versatile Aggies offense with a spectacular season that has included 1,424 yards on the ground and 18 rushing scores for this high-powered attack. However, there is plenty more to the O-A/Elba offense than just the star senior.

Noah Currier has come on as an incredible weapon for the Aggies and that showed last week, with 120 yards on the ground and score and a huge 39-yard TD reception from Bodie Hyde. Hyde hasn’t been asked to do a lot through the air all season but was solid last week, going 4-of-5 for 68 yards with 21 yards rushing and he has a firm grasp of this offense.

All of that has come behind a solid offensive line that has been led by seniors Ethan Cramer and Gottler and junior Brayden Smith, while both Kam and Kaden Cusmano have been strong offensive weapons as well.

“It definitely shows how hard we’ve worked all year and since we were little and now it’s paid off,” Kam Cusmano said. “That’s been our goal every year, to get back to the championship game and we just want to keep playing football as long as we can.”

Defensively, the Aggies will be paced by the Section V Class D Defensive Player of the Year in Gottler, who has nearly 100 tackles on the season, including 24 coming for a loss. The Aggies’ defense, though, is as balanced as the offense.

Kaden Cusmano had a huge game last week in the win over Avon with 12 tackles, while Smith and TJ Andrews each had 11 stops last week. Cramer and Kam Cusmano, as well as Hyde and Connor Scott, all are at or near 50 tackles on the season for an underrated defense that will sometimes bend, but usually not break.

And don’t expect O-A/Elba — like Randolph — to try and mix things up this week.

“I think if you try to change at this point then you’re not being true to yourselves and what got you here in the first place,” Winter said. “You’ve got to dance with the girl that you brought to the dance. We’re just going to try and fine-tune some things for Friday but at the end of the day, we are who we are and that’s what makes us successful.”

The winner of Friday’s game will meet the winner of the game between Section III’s Dolgeville and Section IV’s Tioga in the Class D NYS semifinals next Friday at Cicero-North Syracuse High School at 3 p.m.