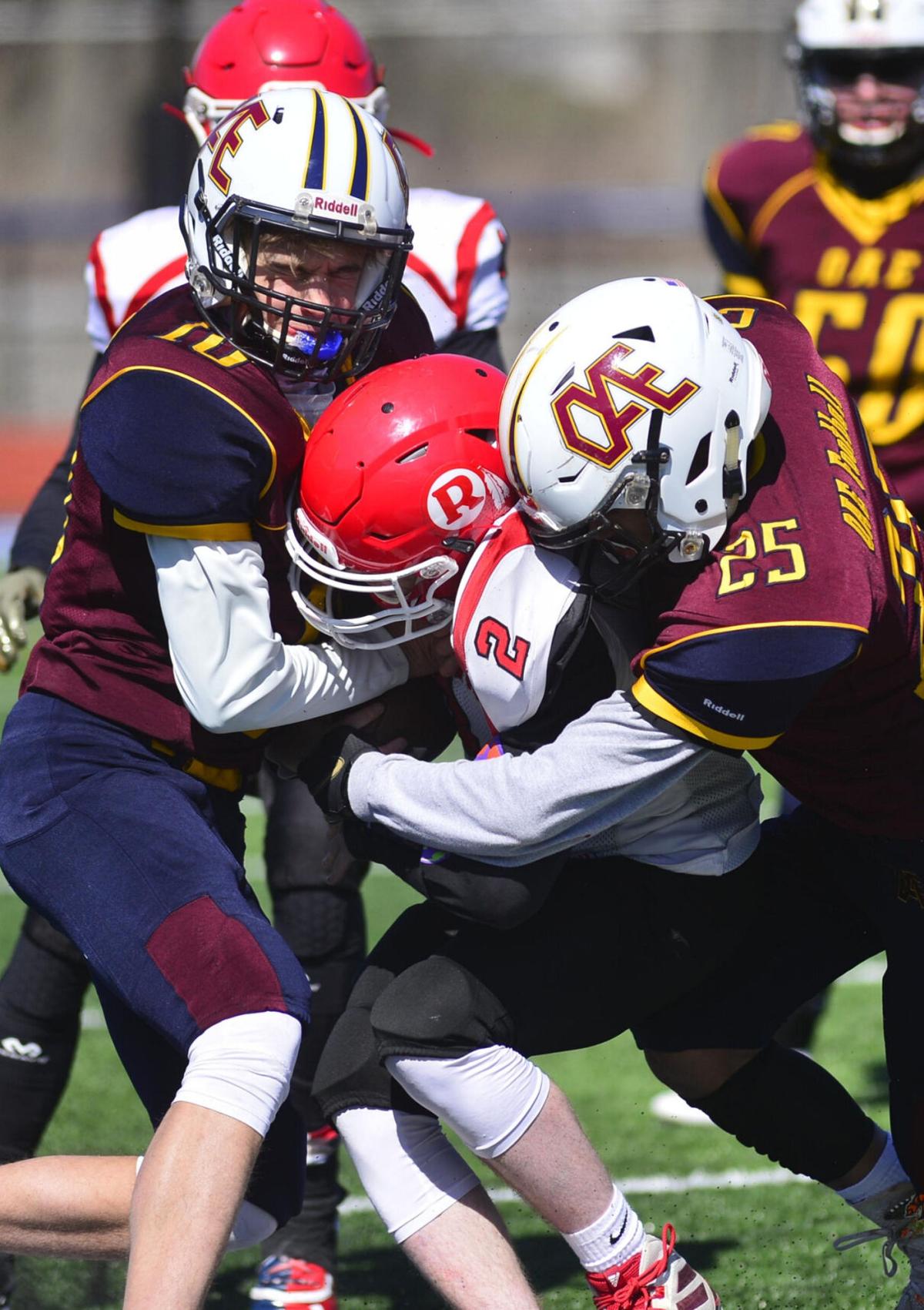 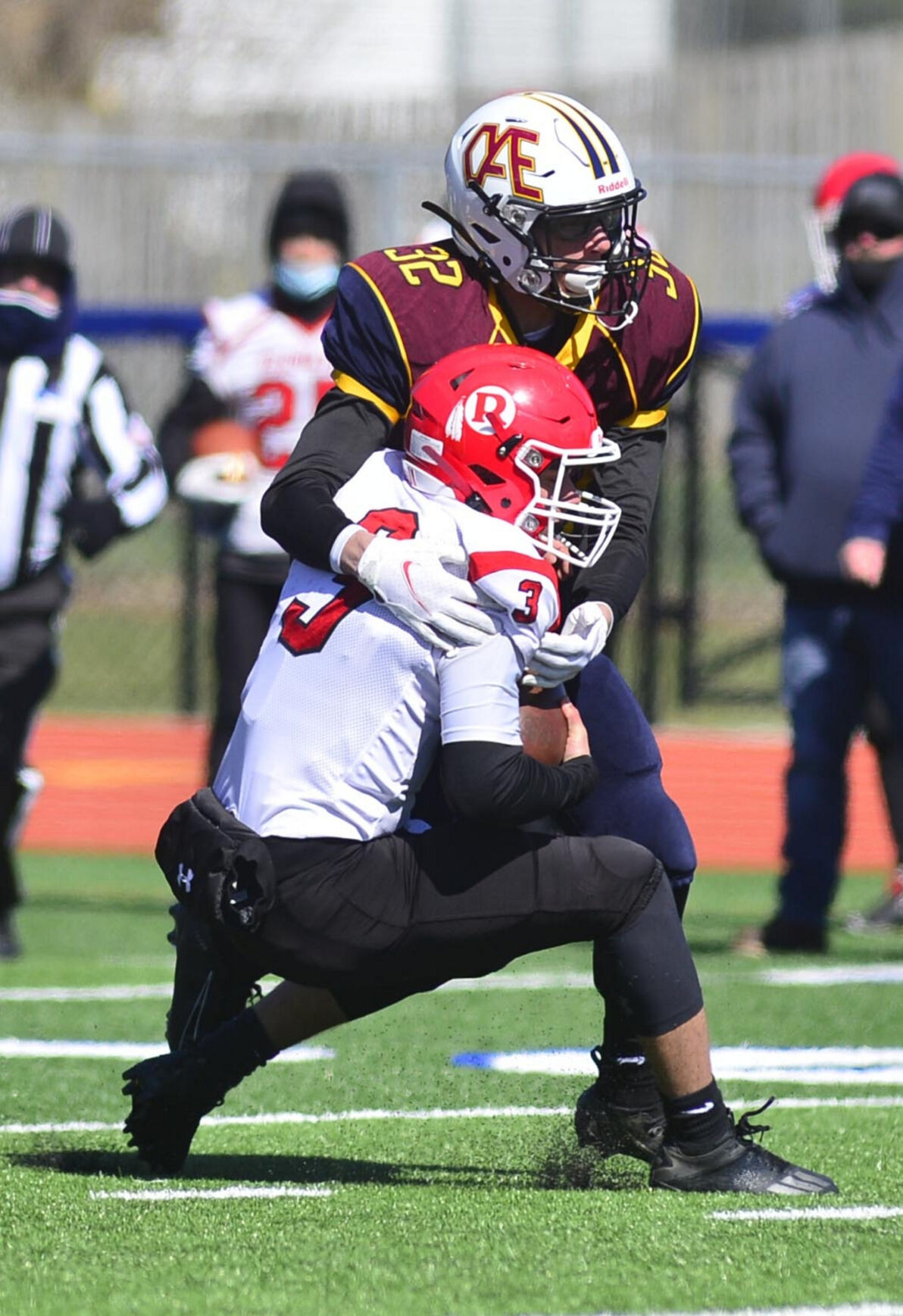 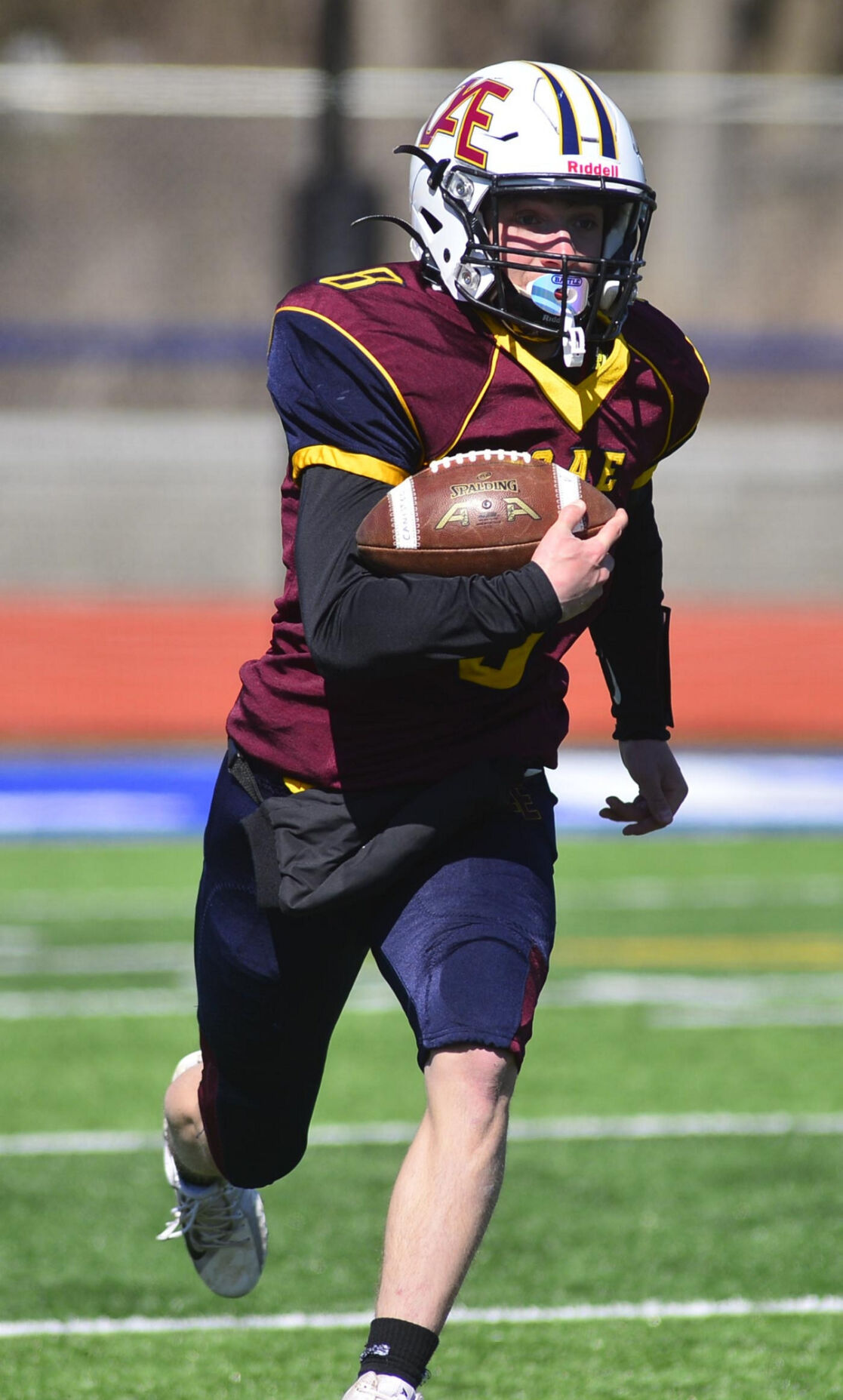 Mark Gutman/Daily News O-A/E’s Bodie Hyde (8) made the defensive play of the game when he scooped up a fumble deep in Aggies’ territory and taook it inside the Canisreo-Greenwood five for the eventual TD during Friday’s action. 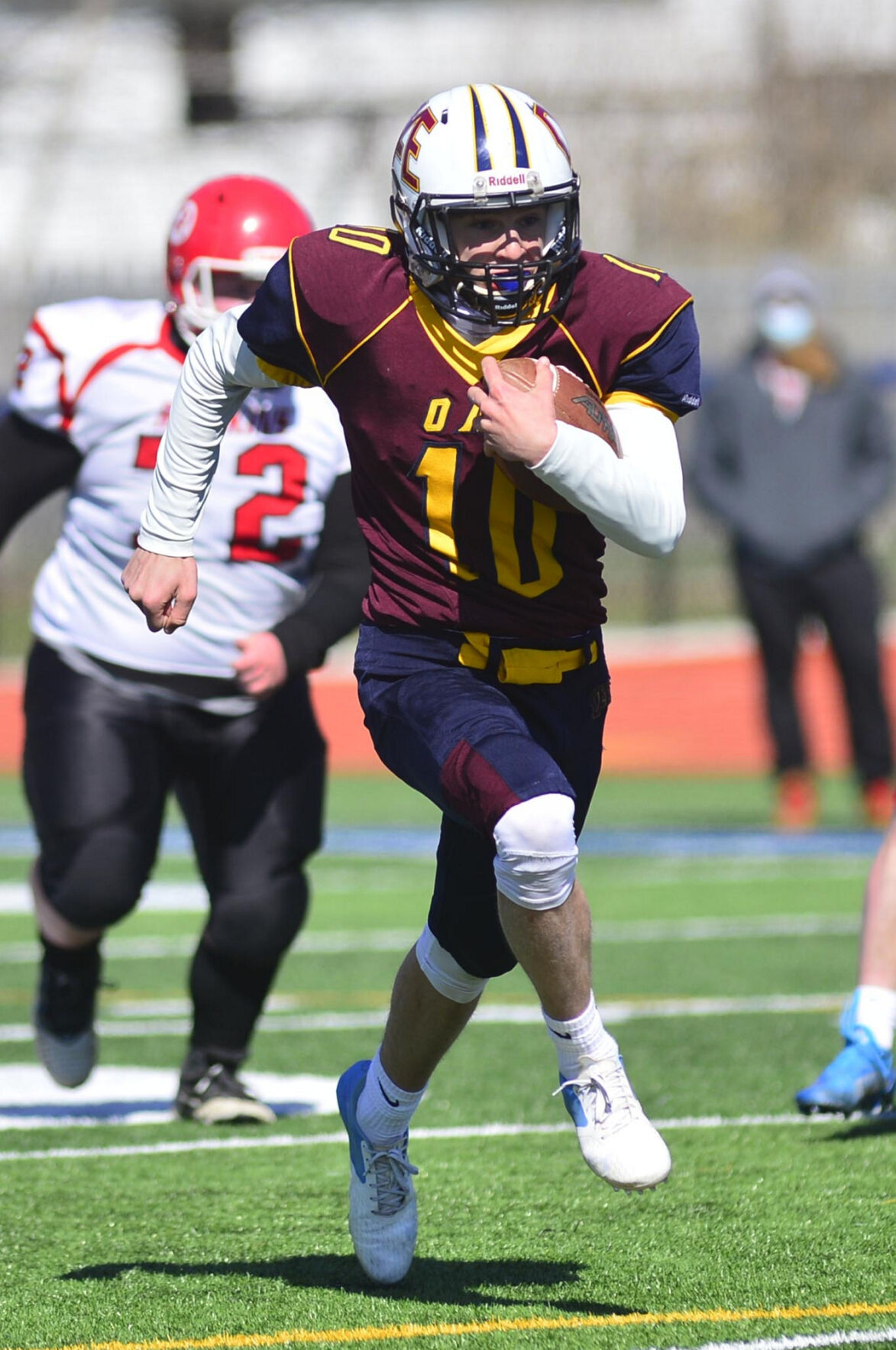 Mark Gutman/Daily News O-A/E’s Gaige Armbrewster (10) breaks free for a long first half run Friday afternoon as the Aggies improved to 3-0 on the season. 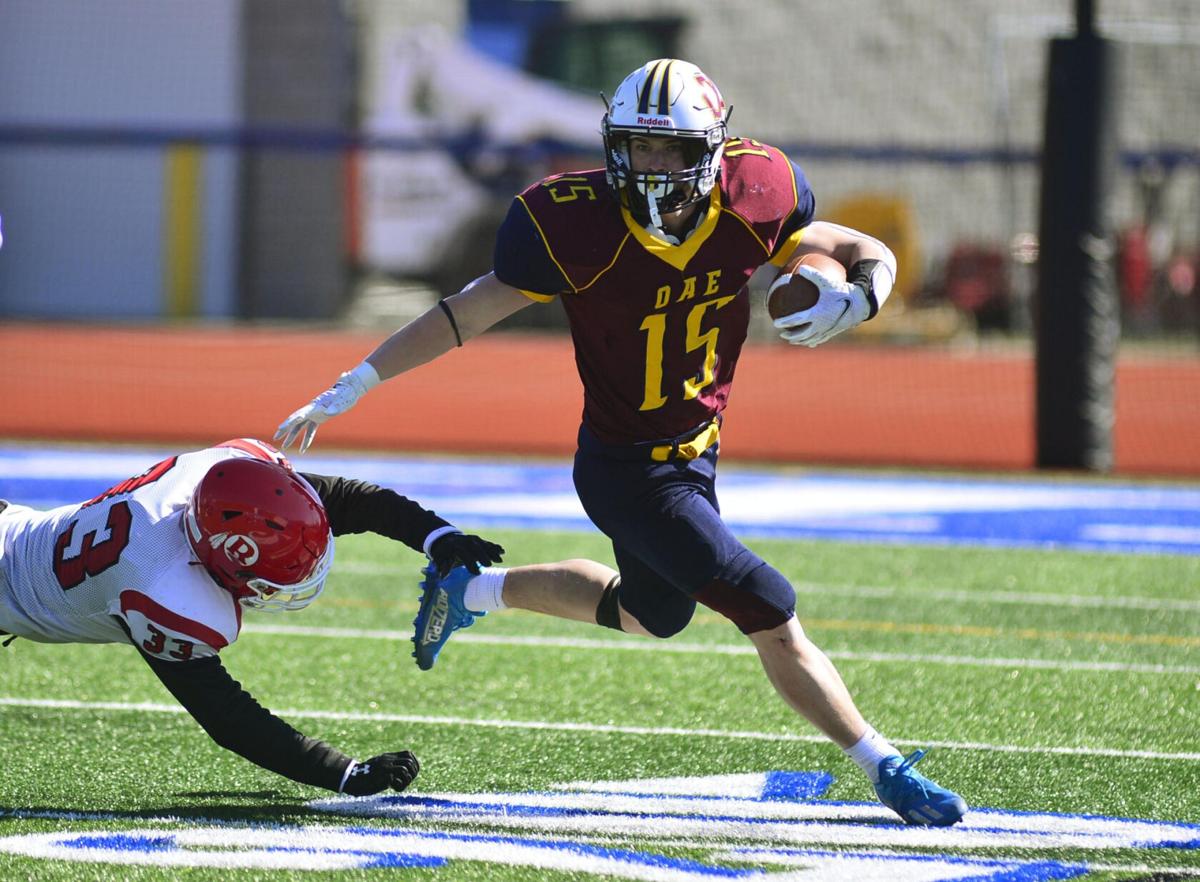 Mark Gutman/Daily News O-A/E running back Ty Mott picks up some nice yards during first half action Friday against Canisteo-Greenwood.

Mark Gutman/Daily News O-A/E’s Bodie Hyde (8) made the defensive play of the game when he scooped up a fumble deep in Aggies’ territory and taook it inside the Canisreo-Greenwood five for the eventual TD during Friday’s action.

Mark Gutman/Daily News O-A/E’s Gaige Armbrewster (10) breaks free for a long first half run Friday afternoon as the Aggies improved to 3-0 on the season.

Mark Gutman/Daily News O-A/E running back Ty Mott picks up some nice yards during first half action Friday against Canisteo-Greenwood.

BATAVIA — After cruising through its first two weeks of the season, the Oakfield-Alabama/Elba football team knew that it was going to get its biggest test of the season to date on Friday against unbeaten Canisteo-Greenwood at Van Detta Stadium.

On Tuesday, O-A/Elba head coach Ty Winter told his team after practice that it was probably the best practice they had had all season and that certainly must have carried over to field against the Redskins.

Led by another monster day from Ty Mott the Aggies rushed for 450 yards, took a big early lead and absolutely dominated C-G with a 40-7 win to move to 3-0 on the season.

“This was a big win for our guys,” Winter said. “This game was another example of our team’s ability to put the opponent away in the fourth quarter. Canisteo is a well-coached team with some talented athletes. I thought this was a very gritty performance by our guys.”

Mott, who came into the day with over 450 yards on the ground and 10 touchdowns already, torched the Redskins to the tune of 310 yards and four more scores on just 23 carries in the win.

Gaige Armbrewster added six carries for 81 yards for O-A/E, which got things rolling right off the bat.

The Aggies took the opening kickoff and promptly went 67 yards in just 1:50 in five plays and took the lead for good on a nine-yard touchdown run from Mott. A Max DeMare PAT made it 7-0.

O-A/Elba had first downs on its first four plays of the game before Mott scored on first and goal.

C-G then put something together on its first drive of the game and got deep into O-A/Elba territory after converting a fourth-and-14 but on the following play Bodie Hyde picked up a Redskins fumble and returned it 85 yards to the Redskins one, where he would sneak it in on the next play for the early 14-0 lead.

With the defense doing its work, the Aggies offense struck yet again before the end of the first quarter.

Aided by a long run by Armbrewster, Hyde capped the drive with another one-yard score to give O-A/Elba a commanding 20-0 lead after the PAT failed.

The tide, though, looked as though it may turn late in the first half.

Following a long run by Ty Kornow, the Aggies fumbled inside Redskins territory with less than two minutes to play before the break.

On the next play C-G’s Roque Santiago found Andrew Morling deep down the left side for 59 yards, which set up a two-yard scamper from Santiago as the Redskins closed to within 20-7 at the break.

But that was as close as they could get.

“The offense continued to show the proficiency of our run game, while the defense further demonstrates the ‘bend but don’t break’ philosophy we spoke on earlier,” Winter said.

The defense was led on the day by Mott, Peyton Yasses, CJ Gottler and Kaden Cusmano.

After the defense forced a three-and-out on the Redskins’ first possession of the second half, O-A/Elba essentially put the game away midway through the third.

A big third-down run from Hyde and a monster run from Mott down to the five led a 10-play, 80-yard drive that took nearly five minutes off the clock; a Mott five-yard touchdown run made it 27-7 with 5:15 left to play in the third.

Following a 36-yard TD run from Mott that made it 33-7, the Aggies defense sealed it midway through the fourth quarter. With a first-and-goal at the one, C-G was stopped on four straight plays and turned it over on downs midway through the final frame.

Mott later added an 83-yard touchdown to put the final nail in the coffin.

“The name of the game has been to keep getting better each week, and our staff is very pleased with the rate at which our guys are improving with each challenge,” Winter Said.

Through three weeks, O-A/Elba has outscored its opponents 141-31, while the Aggies will be at Bolivar-Richburg next week.