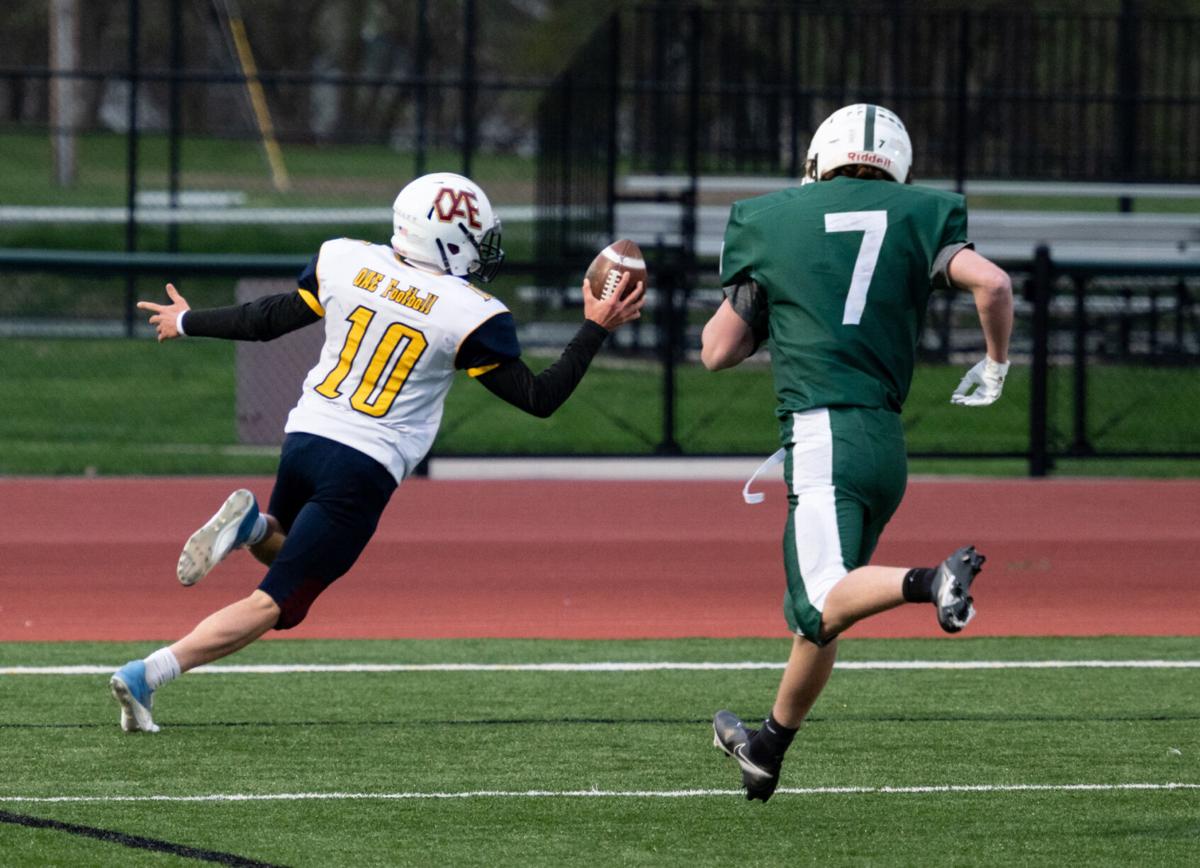 Lindsey Meys/For The Daily News | Oakfield-Alabama/Elba junior Gaige Armbrewster takes it across the goal line at the conclusion of a 63-yard pick-six. 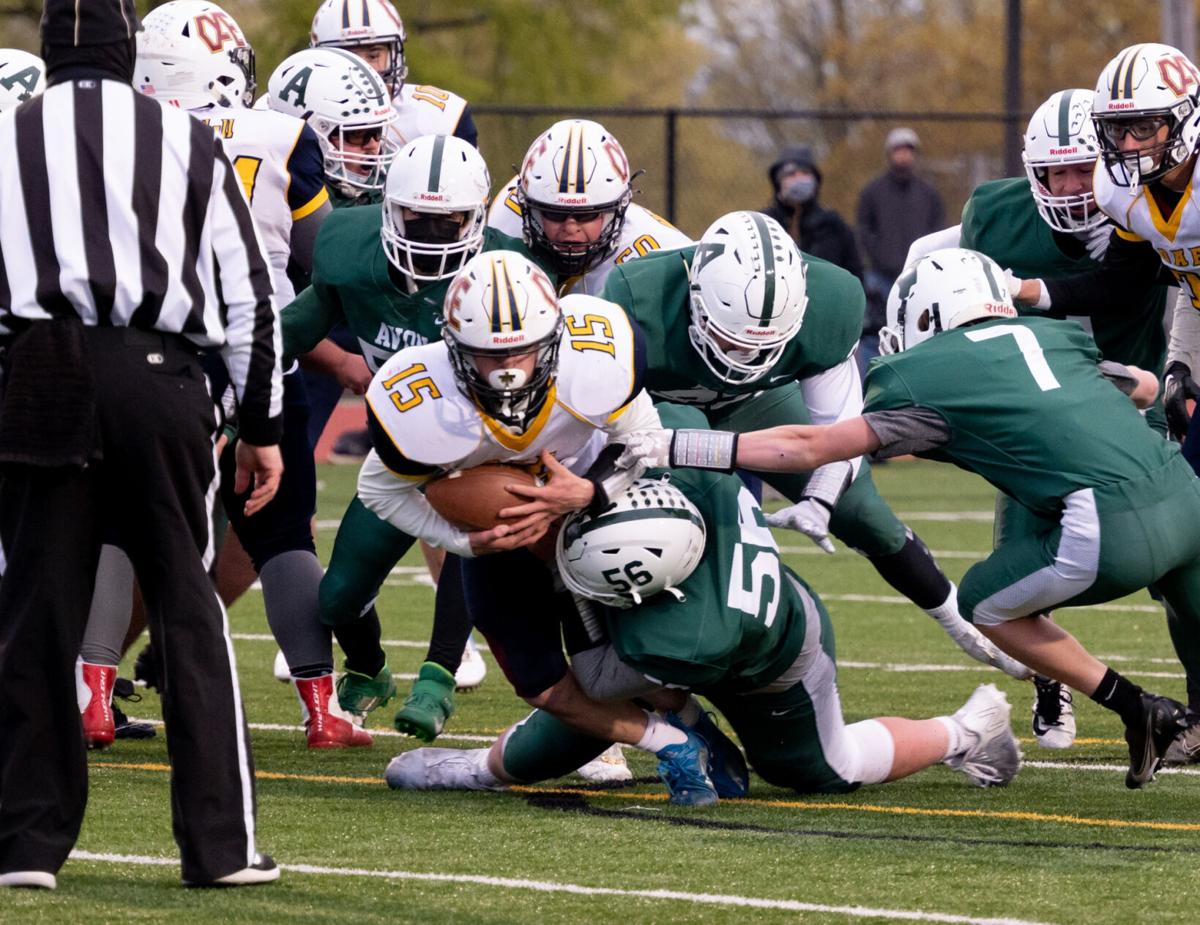 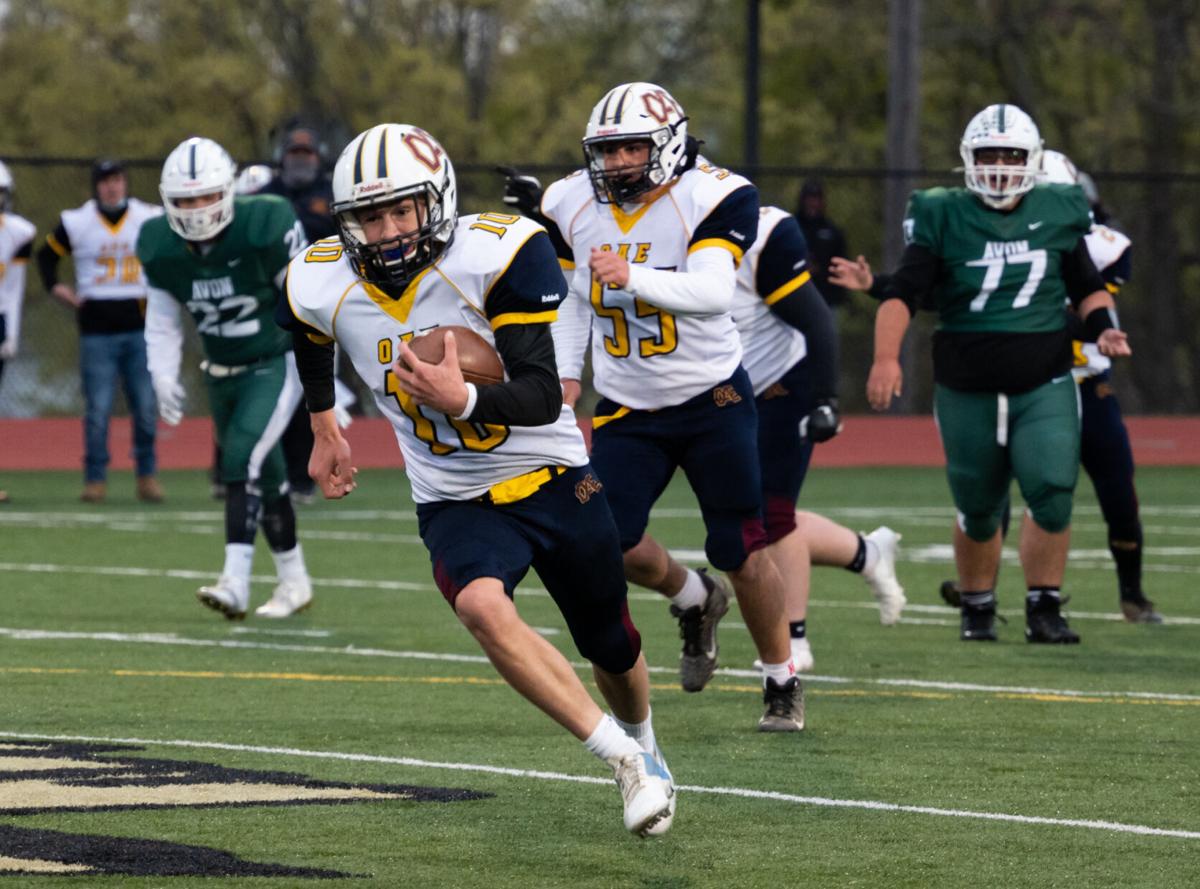 Lindsey Meys/For The Daily News | Aggies junior Gaige Armbrewster had a career night on both sides of the ball, including a 63-yard pick-six from his defensive back position. He added a rushing touchdown.

Lindsey Meys/For The Daily News | Oakfield-Alabama/Elba junior Gaige Armbrewster takes it across the goal line at the conclusion of a 63-yard pick-six.

Lindsey Meys/For The Daily News | Aggies junior Gaige Armbrewster had a career night on both sides of the ball, including a 63-yard pick-six from his defensive back position. He added a rushing touchdown.

AVON — Over the past few seasons playing 8-man football, Oakfield-Alabama/Elba was no stranger to big games.

A sectional championship to go with an Upstate New York Championship in 2019 and another sectional title in 2020, the Aggies entered this season as battle-tested a group as there was in Section V. On Tuesday, in a 37-7 destruction of the previously unbeaten Avon Braves, O-A/E proved its worth as a true contender for a Section V Class D Championship.

The Aggies left little doubt against the Braves, dominating the game from pillar to post behind a monster two-way effort from senior running back Ty Mott. His numbers from the win look like 8-man football numbers - 20 carries, 271 yards, two rushing TDs, and on defense seven tackles, two of which came for a loss, a sack, a forced fumble, a fumble recovery and a pick-six.

“Ty is definitely one of the best I’ve ever seen do it at this level,” said O-A/E head coach Tyler Winter, an all-league player with the Holley Hawks during his playing days. “There isn’t a challenge that he won’t look to face head-on. He was fantastic tonight.”

It didn’t take long for the Aggies to get things going against host Avon, as they took the game’s opening drive 80 yards to the end zone for a touchdown.

A lengthy possession was kickstarted by a 27-yard run from senior RB Ty Kornow on its first play from scrimmage. On the Aggies’ second play of the drive, Mott took a handoff from freshman quarterback Bodie Hyde and was met immediately by Avon junior linebacker Xavier Rivera, who delivered a massive blow that drove Mott into the turf for a minimal gain.

That was about the last time the Braves were able to stop Mott on Tuesday night.

From that point forward, Mott carried the ball five times for 31 yards to help push the Aggies into the end zone on the opening drive. O-A/E’s first score came with 5:05 remaining in the first quarter on a pitch and catch from Hyde to junior tight end Kaden Cusmano which came on a 3rd down and goal from the eight-yard line. On their way to pay dirt, the Aggies endured two straight negative plays prior to the TD pass, as a run for a loss and a fumbled snap turned a 1st and goal from the one-yard line into a 3rd and goal from the eight. Following the Cusmano TD catch, a missed PAT kept the score at 6-0 in favor of O-A/E.

The Braves began the ensuing drive with quality field position at their 42-yard line and kickstarted their own possession with a big gain on their first play from scrimmage. A 12-yard burst on a jet sweep to freshman wide receiver Michael Rowland got things going for Avon, which was playing without junior QB Andrew Rowland. The star signal-caller is out for the season with a leg injury he suffered during the first half of Avon’s Week 5 victory over Clyde-Savannah, opening the door for sophomore QB Richard Brice to start his first varsity game at QB.

Following the big run from Michael Rowland, the Braves gained seven yards on their next play on a run from junior RB Thomas Welch, but then disaster struck.

On the next play, Brice had a play-action pass batted by Cusmano near the line of scrimmage, which caused the ball to float up in the air and into the waiting arms of junior defensive back Gaige Armbrewster who returned the interception 63 yards for the TD.

Just like that, O-A/E was off and running, leading 12-0 with 3:44 still remaining in the first quarter.

Armbrewster came through with a career game consisting of 11 carries for 70 yards and a rushing TD to go with the long pick-six.

“Gaige has been a very reliable player coming up through our program since the beginning of the O-A/E merger,” said Winter. “I think he would attribute a big reason for his progression this season to his dedication in the weight room in the offseason. Gaige, as well as a number of our guys, had a fantastic showing in the weight room this past offseason, and that’s evident in their ability to play confidently on the field each week.”

For those watching Tuesday’s game on the Batavia Daily News YouTube Channel, the Aggies’ confidence must have been seeping through the screen. From the opening snap, O-A/E appeared to be the better team, and at game’s end it showed on the scoreboard.

Following the Armbrewster pick-six, Avon responded on the ensuing drive with a short rushing touchdown from Welch, but that was all she wrote for the Braves’ offense. The Aggies’ defense answered the bell, forcing five turnovers while contributing the two defensive touchdowns en route to a 30-point win.

“The defense was very impressive tonight,” said Winter. “Coach Corey Winter put together a great defensive game plan for this game. Our team is continuing to live by the ‘bend, but don’t break’ mentality that they’ve demonstrated time after time throughout the season. It seemed like whenever our backs were against the wall, and we needed a play, one of our guys would step up with a big tackle or a takeaway. Avon is a well-coached team, and we knew we would need to play mistake-free football to put ourselves in a position to win this game. The boys did just that.”

Senior linebacker Peyton Yasses led the Aggies’ defense with 12 tackles, while senior defensive lineman Dontrell Jenkins came through with eight stops in the win. Senior defensive back Zach Howard recorded an interception, as did Hyde from his safety position. Under center, Hyde finished the game 7 of 12 passing for 65 yards, a TD and an INT.

Leading into Tuesday’s game, Winter says his team was well aware of the opportunity in front of them and responded with one of their best weeks of practice this season.

Now sitting at 5-1, the Aggies have locked up the top seed in the upcoming Class D playoffs.

“Moreso than the one seed, tonight’s win was about being able to control our own destiny,” added Winter. “A loss tonight would have left the power in the hands of some other teams. No team ever wants to be in that situation. Luckily, we could still control what we can control tonight with a good performance, so the guys were determined to go out and leave no doubt with a win.”

Avon falls to 5-1 and finishes with the No. 2 seed in Class D. The Braves will take on No. 3 Canisteo-Greenwood on Sunday at 1 p.m. at Avon High School.

“We will watch the film tomorrow as our opponent becomes solidified,” added Winter. “We told the kids that their goal needs to be continued improvement each day as we navigate through the postseason. We’re excited to see what this team can accomplish if we can continue to take a step each day together.”

O-A/E is scheduled to play No. 4 Alexander in the the semifinal round on Sunday at 1 p.m. at Van Detta Stadium in Batavia.