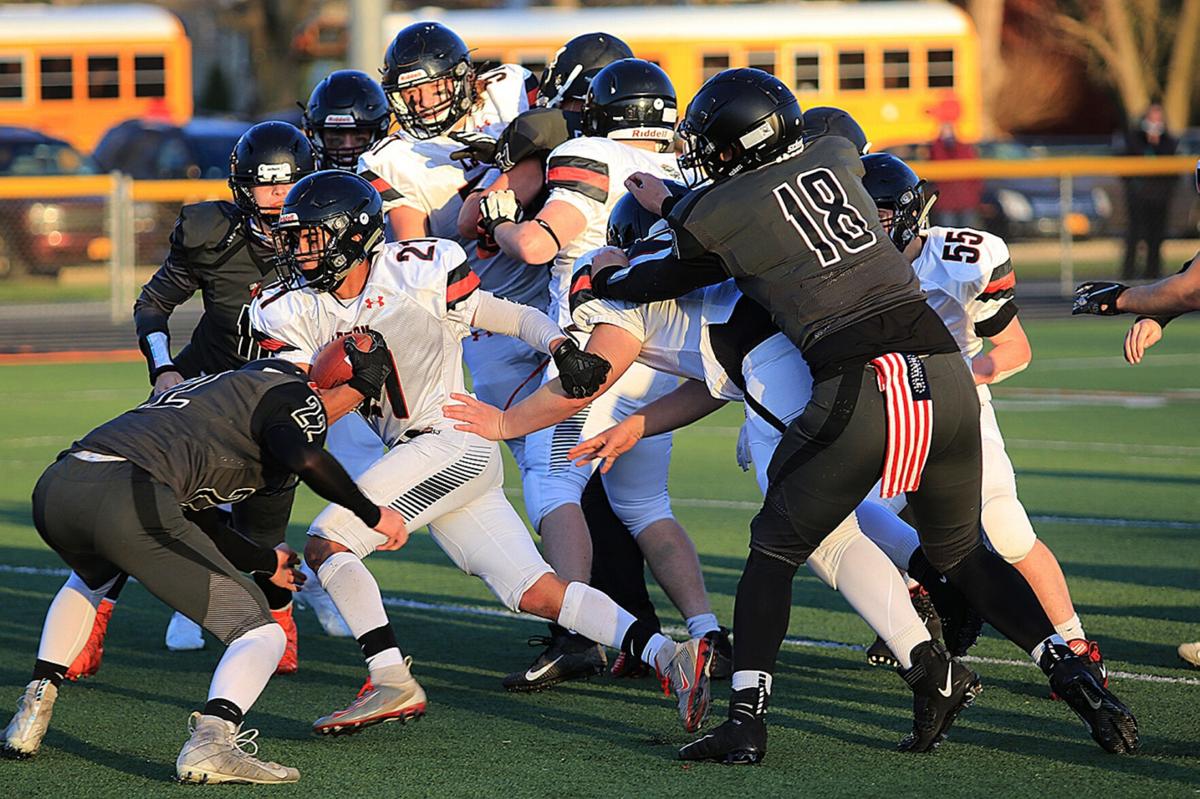 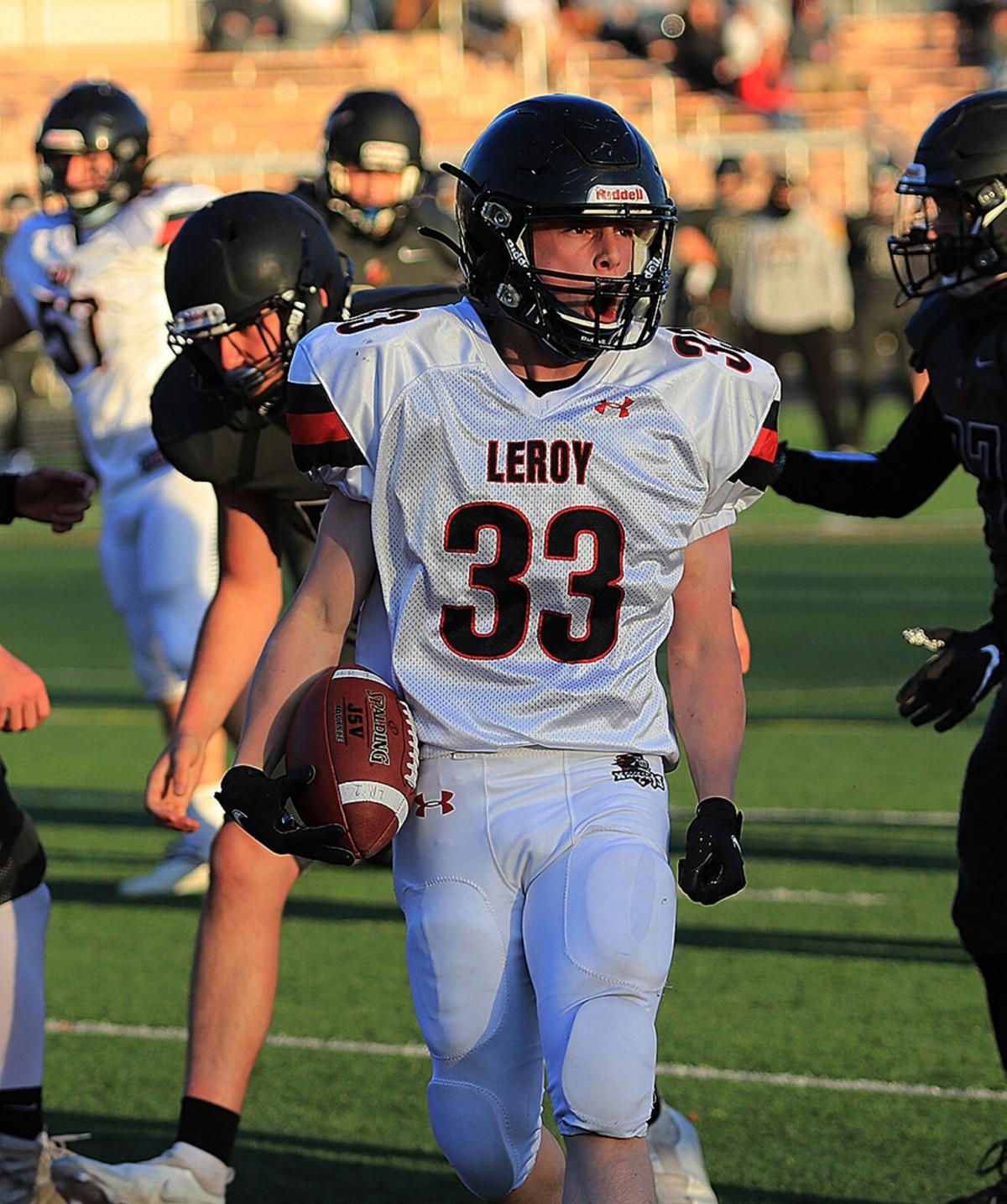 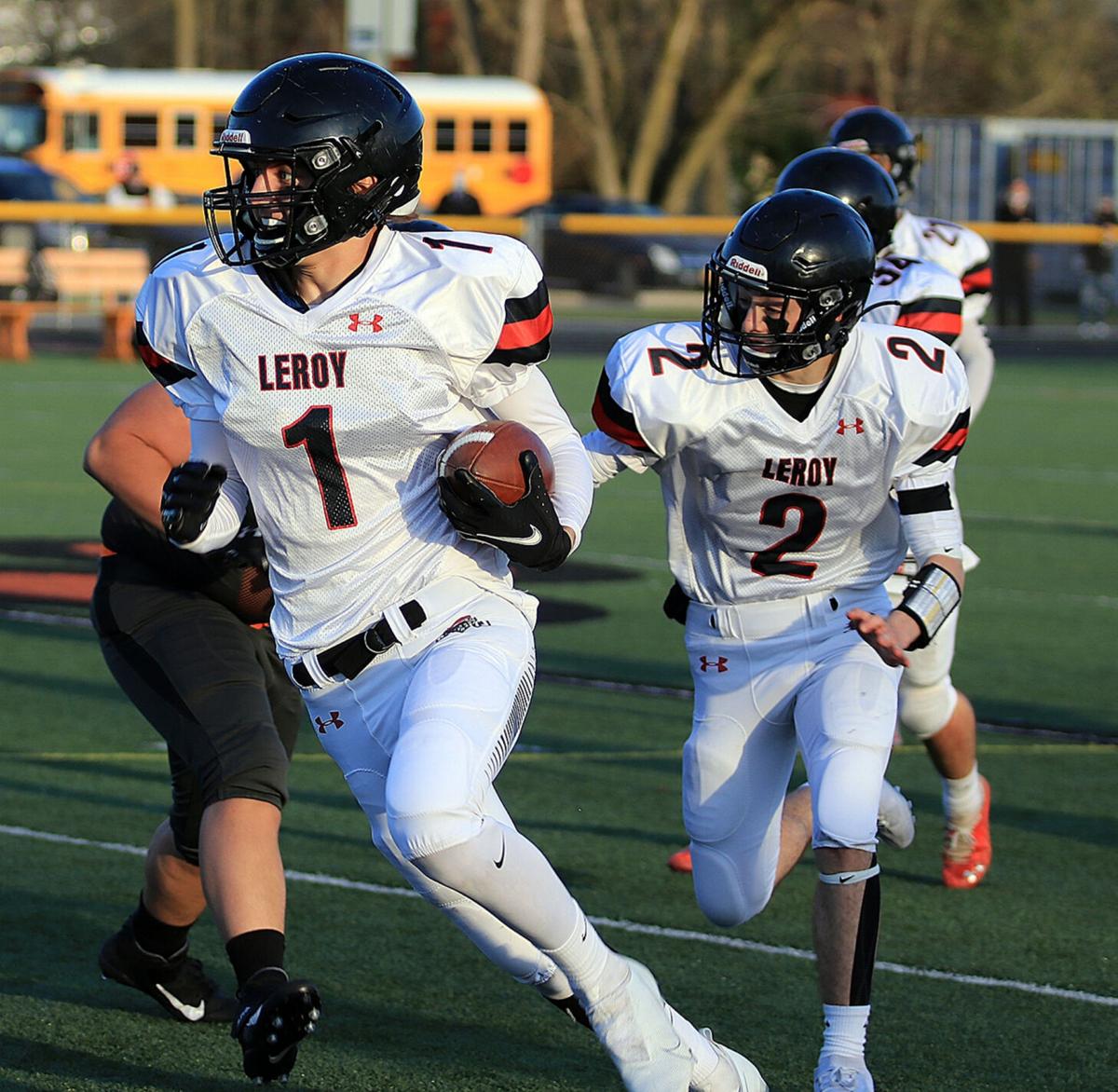 Ed Henry/For The Daily News | Cody Lytle returns an interception in the first half. 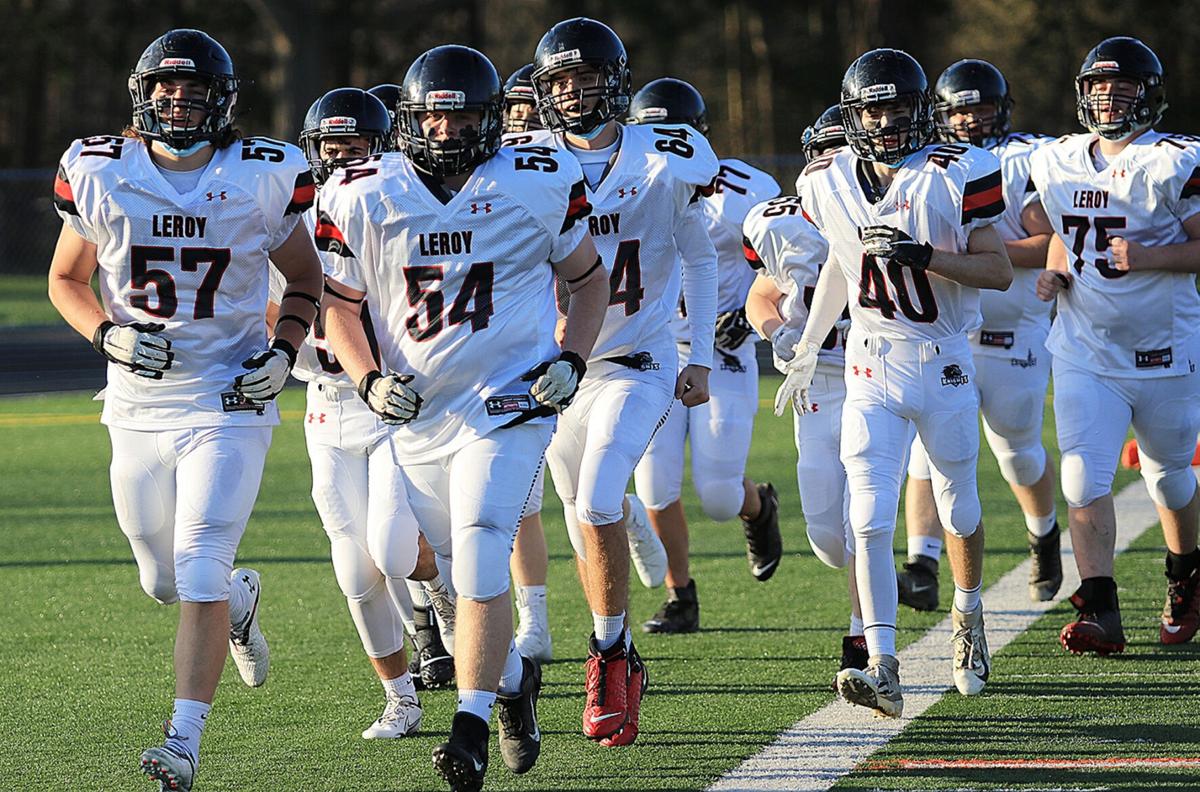 Ed Henry/For The Daily NewsLe Roy remained unbeaten with a win over LetSaw on Tuesday night.

Ed Henry/For The Daily News | Cody Lytle returns an interception in the first half.

Ed Henry/For The Daily NewsLe Roy remained unbeaten with a win over LetSaw on Tuesday night.

WARSAW — The unbeaten Le Roy Knights proved their worth as one of the top contenders for a Class C title with a lopsided win, 35-7, over Letchworth/Warsaw on the road on Tuesday night.

Senior quarterback Alex Panepento had a massive night returning to the lineup, finishing with 16 carries for 78 yards and three rushing touchdowns. He added eight completions for 98 yards and a score after missing the Knights’ win over East Rochester/Gananda last week.

Le Roy got off to a great start against L/W, intercepting a pass from senior quarterback Austin Williams on the first play from scrimmage and taking it the other way inside the LetSaw 15 yard line. Knights senior defensive back Cody Lytle came away with the pick, which set up Le Roy’s first score of the game just 2:09 into the first quarter. Sophomore running back Jack Tonzi capped off a short Le Roy drive with a three-yard touchdown run, followed by a PAT from junior placekicker Mitchell Hockey to give the Knights a 7-0 advantage.

Le Roy added to its lead minutes later. The Knights’ defense forced a three and out that came with help from a LetSaw holding penalty, then the LR offense went 75 yards on the ensuing drive on their way to pay dirt.

A 22-yard pass from senior quarterback Alex Panepento to a falling Lytle set up Panepento’s first rushing TD, which came from four yards out. After another successful PAT from Hockey, the LR advantage was at 14-0, with 3:28 remaining in the first quarter.

LetSaw responded just 2:26 later with their first points of the game on a deep ball from Williams to wide receiver Nick Thompson, who showed great concentration to haul it in through a deflection and pass interference called on a Le Roy defender in the end zone. The pass and catch went for 23 yards, and after a successful PAT from Emmitt Stores, LetSaw suddenly found itself in a ballgame, trailing 14-7 with 1:02 remaining in the first quarter.

Le Roy’s ensuing drive stalled, and the Knights punted the ball back to LetSaw to begin the second quarter.

LetSaw began their next possession at their 23-yard line and moved the sticks on the first play of the drive on a 13-yard pass and catch from Williams to senior wide receiver Eddie Stores. Disaster would strike on the next play, as a first down pass from Williams to Aaron Miller ended in a turnover as Miller lost the ball while running near the line to gain. Knights junior linebacker Robbie Newmark fell on the loose ball to regain possession for LR with 11:30 remaining until halftime.

Off the LetSaw turnover, Le Roy would quickly take it the other way for six. A decisive drive beginning near midfield ended in the end zone on a three-yard touchdown pass from Panepento to junior wide receiver Adam Risewick. After another Hockey PAT, the Knights’ lead improved to 21-0 with 5:56 remaining in the second quarter.

Risewick finished the game with four catches for 47 yards and the score.

The rest was history, as Panepento added a one-yard touchdown run with 5:24 remaining in the third and another scoring run, this time from six yards out with 6:35 remaining in the fourth. Hockey made both PATs and finished a perfect 5 of 5 on his kicks.

Knights senior running back Nate Andrews was a steady force throughout the win over LetSaw, finishing with 19 carries for 102 yards.

Defensively, several Knights recorded notable performances, including Tonzi, who came away with five tackles to go with a sack. Senior linebacker Cole Rauscher also made five tackles for Le Roy, while junior defensive lineman Zach Vanderhoof made three tackles and added a sack.

Williams finished 9 of 15 through the air for 136 yards and the interception, while Stores made 11 tackles for the LetSaw defense.

Le Roy improves to 5-0 and looks ahead to a matchup with fellow unbeaten Livonia (5-0) on Monday. The game will be streamed LIVE on the Batavia Daily News YouTube Channel, with the winner locking up one of the top two seeds in the Class C standings.

For a replay of Tuesday’s game between LetSaw and Le Roy, please visit the BDN YouTube Channel. Our Casella Waste Players of the Game in the Knights’ win were Andrews, Lytle and Tonzi. Each player will be presented with a $25 gift card to T.F. Browns in Batavia for their efforts.