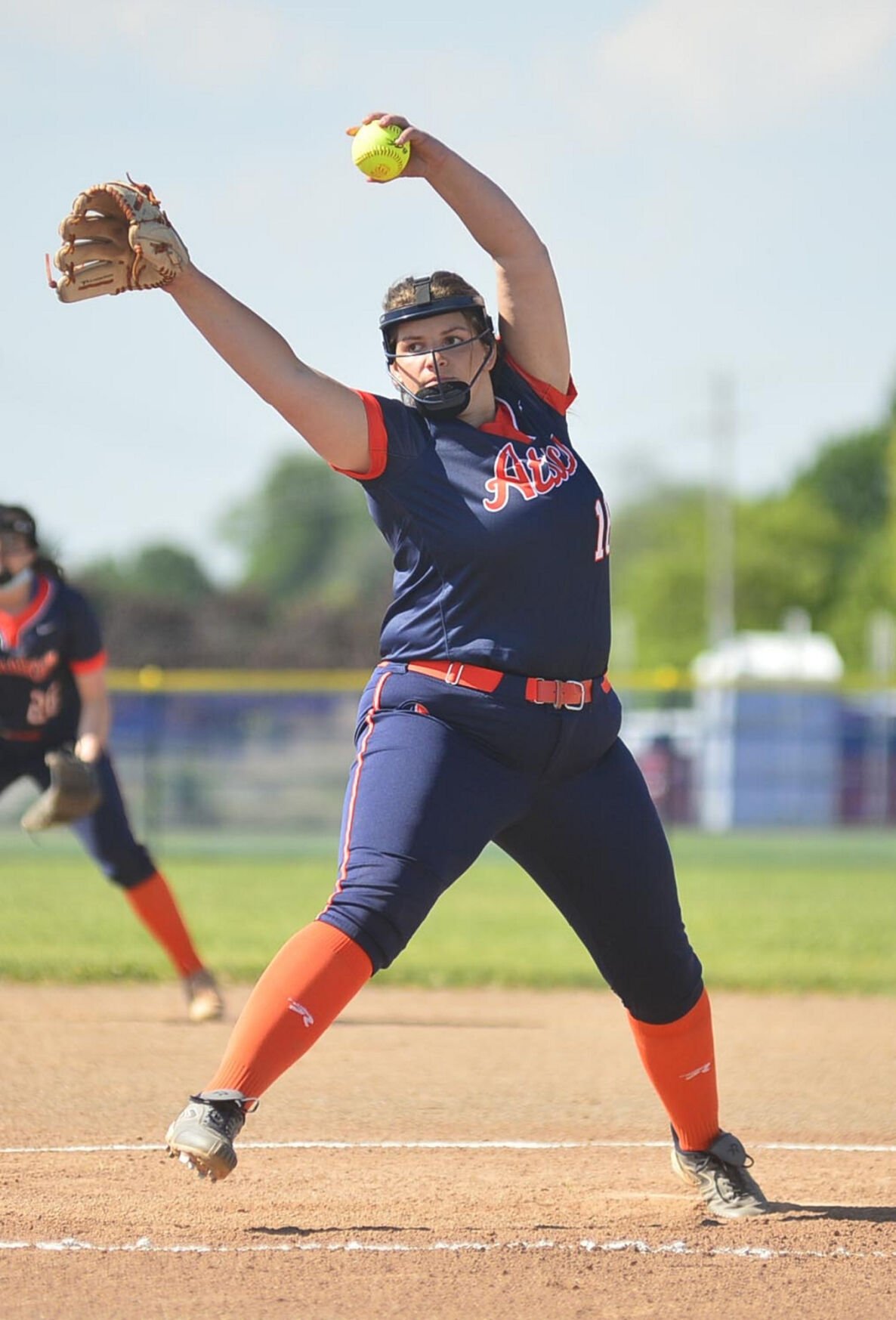 Mark Gutman/Daily News Attica’s Brittany Martin winds up for the pitch against Alexander on Tuesday. 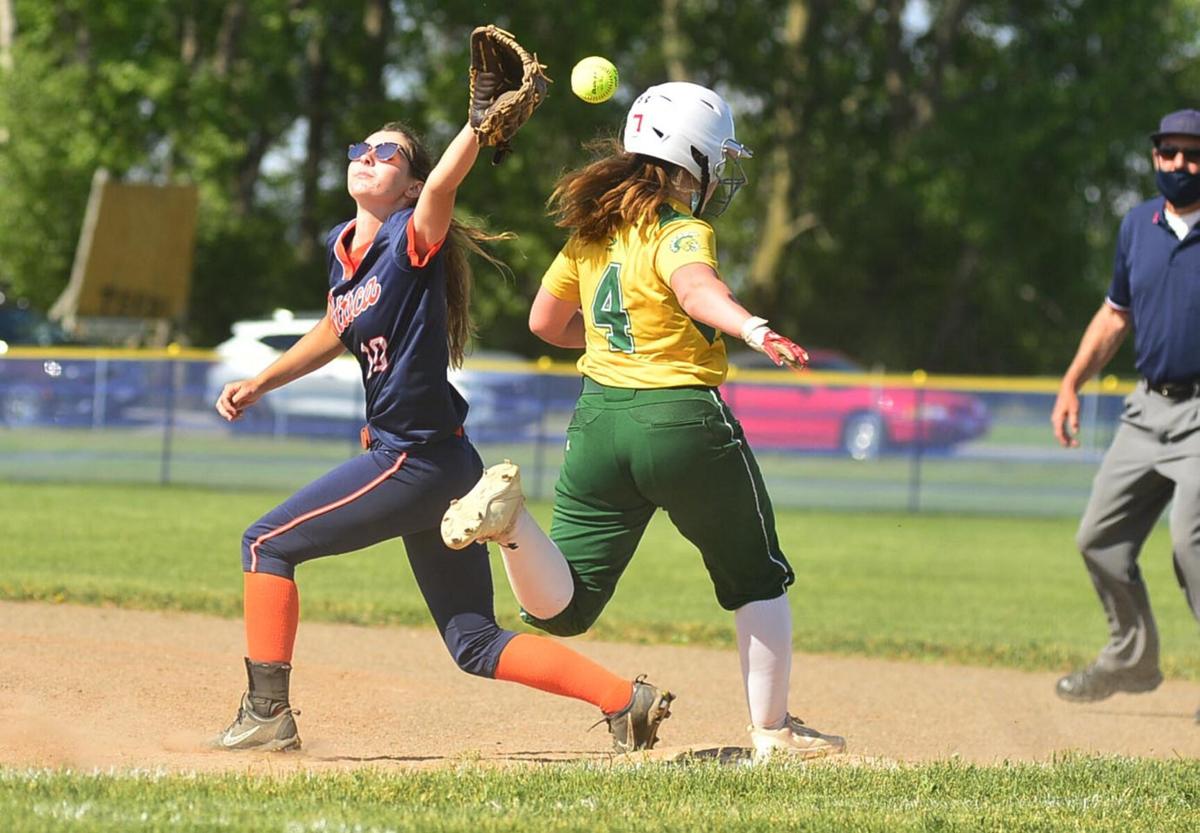 Mark Gutman/Daily News Alexander baserunner Mikayla Hickey beats the throwl to first base as Attica’s Elizabeth Newel sees the ball go off her glove on Tuesday. 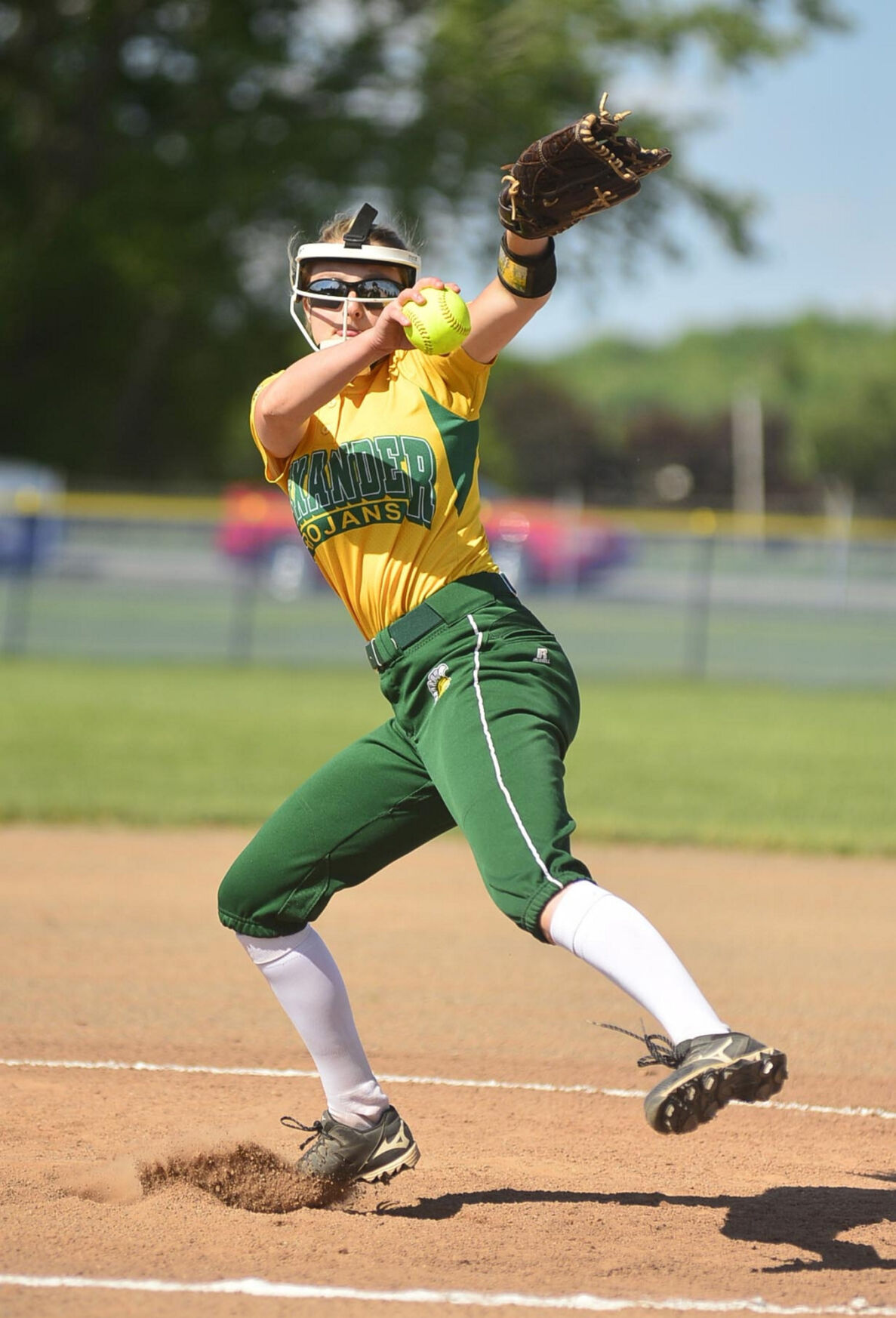 Mark Gutman/Daily News Attica’s Brittany Martin winds up for the pitch against Alexander on Tuesday.

Mark Gutman/Daily News Alexander baserunner Mikayla Hickey beats the throwl to first base as Attica’s Elizabeth Newel sees the ball go off her glove on Tuesday.

ATTICA — It was a rivalry game between a pair of quality teams on Tuesday afternoon in Attica and the action lived up to the hype.

Maddie Robinson singled home the game-winning run in the bottom of the sixth inning and Attica held on for the win 10-9 over Alexander.

The Blue Devils actually jumped out a 5-0 lead after one inning, before Neva Sailie, Emily Pietrzykowsi, Madison Boyce, Courtney Schum and Sam Sawyer all added RBIs for Alexander later in the game as the Trojans continued to fight back. Alexander would get four runs in the fourth to close the gap.

Brittany Martin got out of a big jam in the seventh as she struck out the final hitter with the bases loaded. Martin struck out seven in the circle on the night.

Ellie Newell, Mackenna Jarnot, Natalie Perl, Maya Hardie and Robinson all had multiple hits on the day, with Robinson driving in three runs.

Newell finished with two triples and four RBIs, while Attica stole seven bases in the win.

Sawyer allowed 12 hits and struck out seven in the circle for the Trojans.

CJ Ryan was 3-for-4 with a home run in the loss for the Hornets, while Josie Reding, Piper Hyde and Lily Davis all had two hits in the losing effort.

Grace Johnson had two hits, including a home run, and two RBIs and Brianna Krisher had two hits and two runs batted in as the Tigers rolled to the win.

Lyndonville scored in every inning from the second to the fifth to go up 7-0.

Haley Shaffer allowed six hits and struck out seven as Lyndonville moved to 10-1.

Lauren Pilon went 4-for-5 with three doubles and 6 RBIs to pace the Eagles in the easy win.

Sara Mattle tossed a one-hitter with three strikeouts, while she was also 4-for-4 with a double, a walk and two RBI in the win. Julie Coble (five runs scored) and Shelby Kruger (double, triple, 5 RBIs) each finished the day with five hits, while Ciera Kupferschmid was 3-for-4 with a triple and two RBIs.

Grace Huhn went 3-for-4 at the plate with a double while Aly Ball went 3-for-5 as Byron-Bergen got the win.

The Lady Bees broke open a close game with seven runs in the top of the seventh inning.

Kelly Ireland went 2-for-2 for Byron-Bergen, who improved to 6-7 on the season.

“We had some great plays defensively tonight that I am extremely proud of,” B-B head coach Mariah LaSpina. “I wanted to say congratulations and best of luck to all the seniors at Holley.”

Hayley Papp continued her dominating season as she rapped out five hits, including two home runs and a double as the Oatkan Knights stayed unbeaten.

With her double, Papp became the all-time career doubles leader in Section V history with 58.

Brenna Fenstermaker also had a big day with five hits, including a home run and three RBIs, while Bryn Luckey added four hits and three runs batted in for Le Roy.

The Indians scored eight times in the second inning and cruised from there as they clinched the LCAA Division III title. With one out and no one on, Keshequa took advantage of three errors and three walks in the inning, with all six coming in to score.

“You can’t afford to make that many mistakes let alone to a good hitting team like Keshequa,” Cal-Mum head coach Dan Dickens said. “Every time it looked like we were going to squeeze out some runs they made a great play in the field.”

Aurora Sabins got the win in the circle, scattering six hits, while she also went 2-for-3 at the plate for the Indians.

Cheyenna Cotton was 2-for-4 with a triple and three RBIs, while Julia Wilkins was 3-for-4 with two batted in for Keshequa.

Sawyer Richardson was 2-for-4 in the loss for the Raiders.

“Really disappointed with our concentration and focus today,” Dickens said. “Good thing about softball is you need to have a short memory as we get to come right back tomorrow and look to get things turned around again.”

The Cougars jumped out to a 5-0 lead and never looked back in the win over the Blue Devils.

Bryn Wormley had a big day in the losing effort as she went 4-for-4 with a double, triple and three RBIs, while Julia Clark, Makenzie Reigle and Tess Barone all had multiple hits as the Devils fell to 7-6.