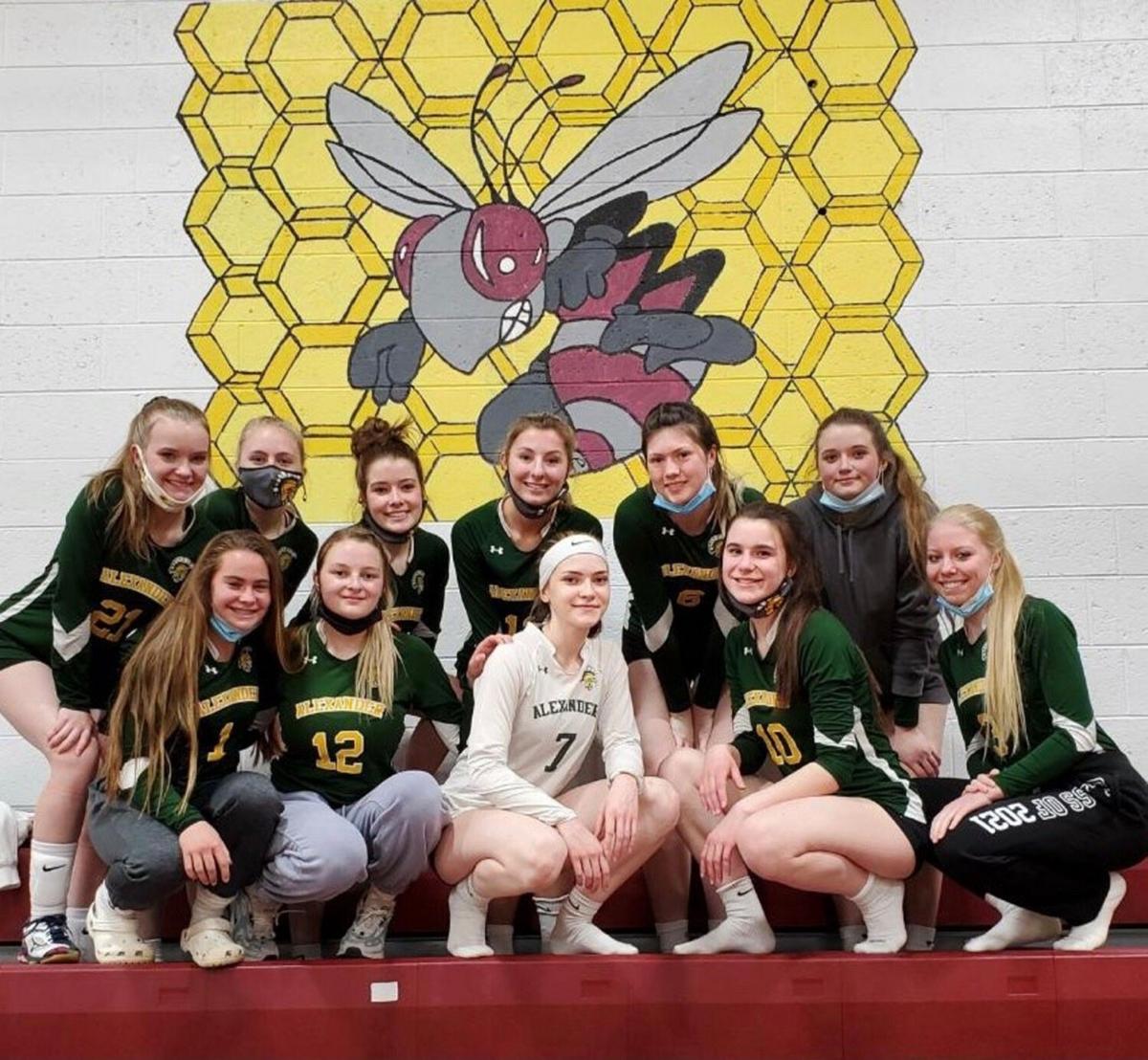 Provided Alexander picked up the victory over Byron-Bergen Friday night to improve to 11-1 on the season. 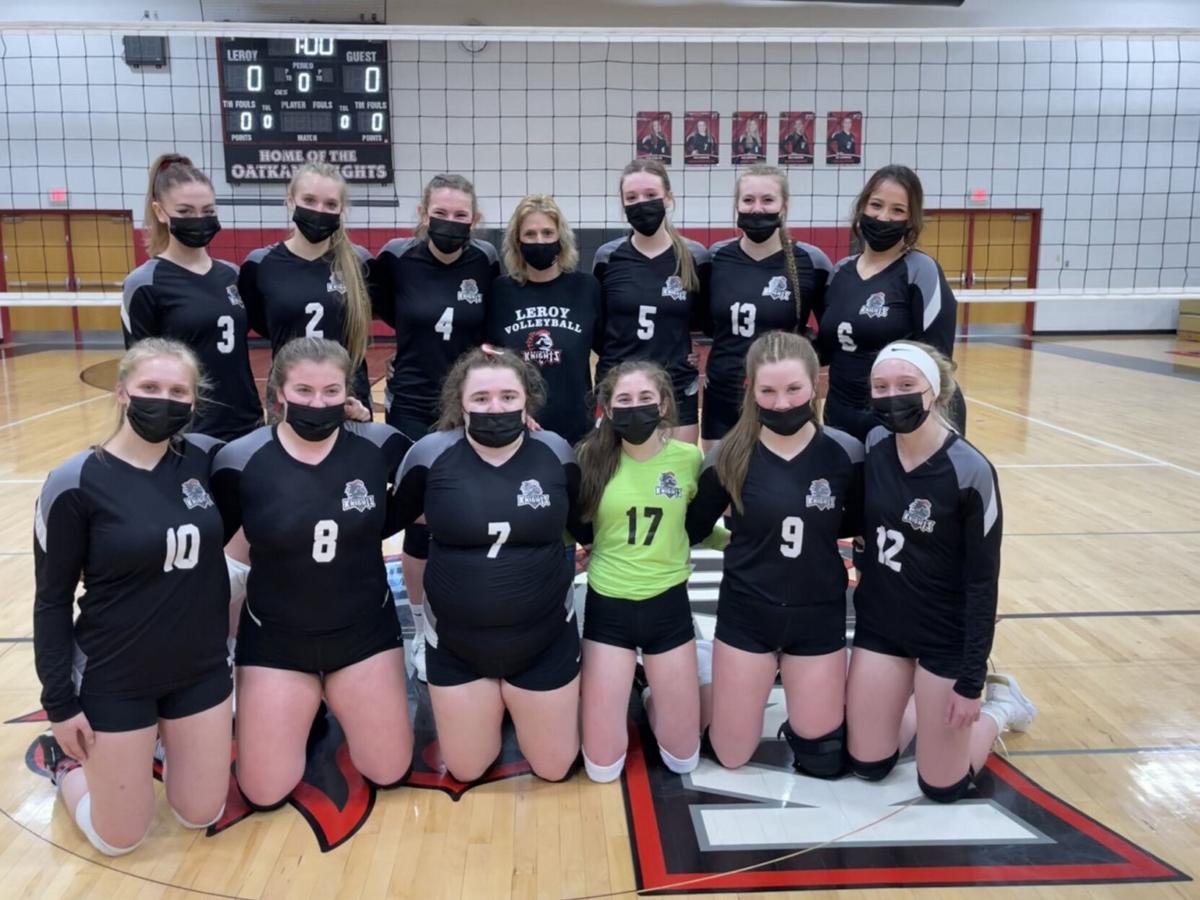 Provided The Le Roy Knights captured the LCAA D-I title Friday with the victory over Livonia.

Provided Alexander picked up the victory over Byron-Bergen Friday night to improve to 11-1 on the season.

Provided The Le Roy Knights captured the LCAA D-I title Friday with the victory over Livonia.

Visiting Alexander improved to 11-1 on the season with the five-set victory over Byron-Bergen Friday in GR D-I action.

For Alexander, Kiersten Przybylski had 26 assists with six service aces; Sam Sawyer had nine kills and four aces; Hailie Kramer had nine kills; and Mya Merle had a monster defensive game with 29 digs.

“This was a fun, well-played game on both sides of the net,” Alexander coach Marcia Hirsch said.

For Byron-Bergen (10-2), Kelly Ireland led the Bees with 25 service points including eight aces with seven digs and five kills; Lexi Vurraro handed out 29 assists to go with seven digs; Jorie Strzelecki had 17 digs with 13 kills; and Julia Pangrazio added 12 digs with nine kills.

Alexander has a huge match coming up at Attica Monday night.

Both teams are currently tied at 11-1 and the winner will have a leg up for the GR D-I title.

Notre Dame escaped the upset as they nipped Kendall in five sets Friday.

Maggie Monachino had a monster night with 18 assists and 17 digs while Grace Mileham dished out 23 assists.

Also for the Fighting Irish, Amelia McCulley added 19 kills with eight digs while Lindsey Weidman had 17 kills with three aces.

Sophomore Lauren Kingsley had 11 Kills, seven aces and one block as Pavilion improved to 9-1.

Keshequa (0-9) was led by Nichele Douglass with five assists and Malia Ras with one kill and one block.

Deanna Johnson-Myers pounded out 16 kills while Myiah Annis-Jones dished out 25 assists with four aces as Warsaw got the four set victory Friday.

For Perry, Mercedes Alderman had a double-double with 12 digs and 10 kills while Leah Fisher added 15 assists and 15 digs.

Visiting Avon finished with 65 team digs in the match as they stayed unbeaten on the season with the four-set victory over Letchworth )7-3) Thursday night.

Ava Hubbard paced Avon with 14 digs and 13 kills while Essie Levendusky had 27 assists and two aces.

Giana Trubia came in to serve well in the third and fourth sets for Avon, who hosts Perry Tuesday.

For Letchworth, Brooke Degroff led the way with 12 kills and three aces, while Morgan Brace had 18 assists. Delaney Bean served up eight aces for Letchworth.

Ty Heineman had a big second match as well as he produced 13 digs with 11 kills and three aces while Cole Tillotson dished out 20 assists with six digs and five kills as P/Y swept Sodus Saturday.

“Our serving and passing was solid, yet our defense made the difference allowing the offense to have much needed balance,” head coach Rob Milligan said. “Many players stepped it up today.”

Andrew Betts led Keshequa with five points of serve along with three digs, two kills and two blocks while Trey Learn had 13 digs.