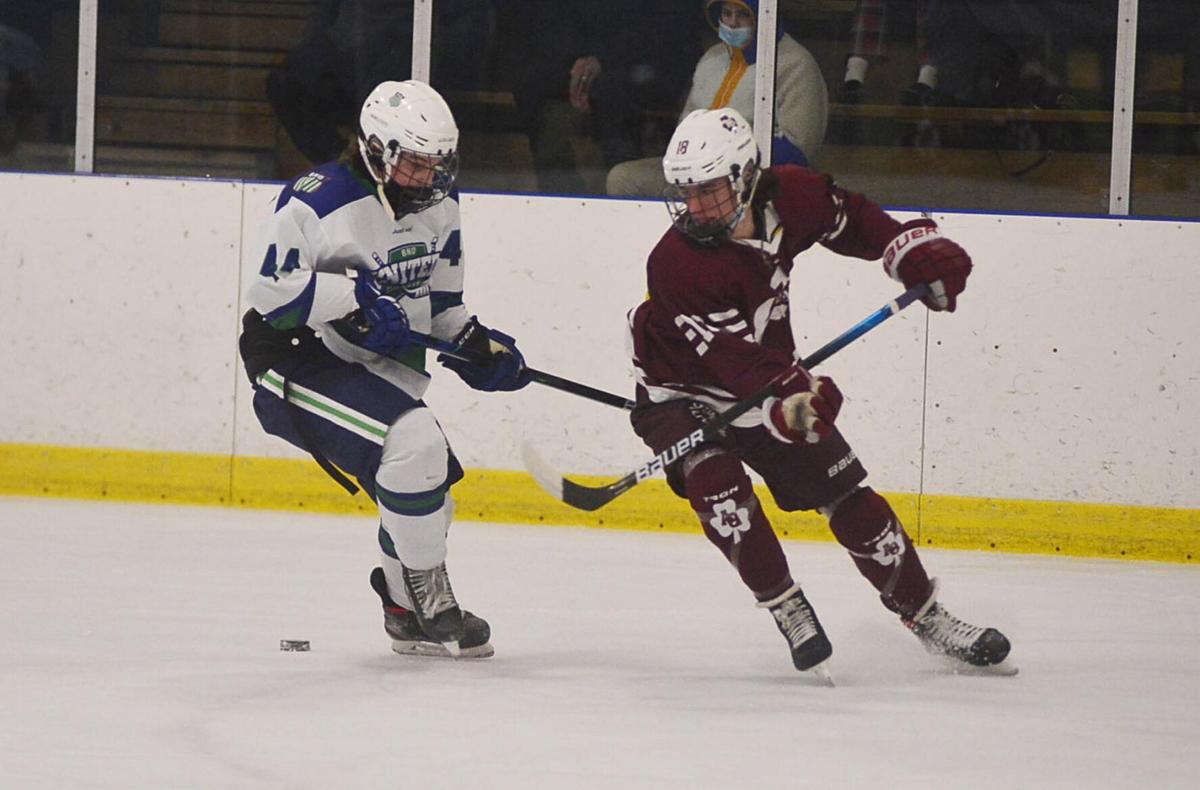 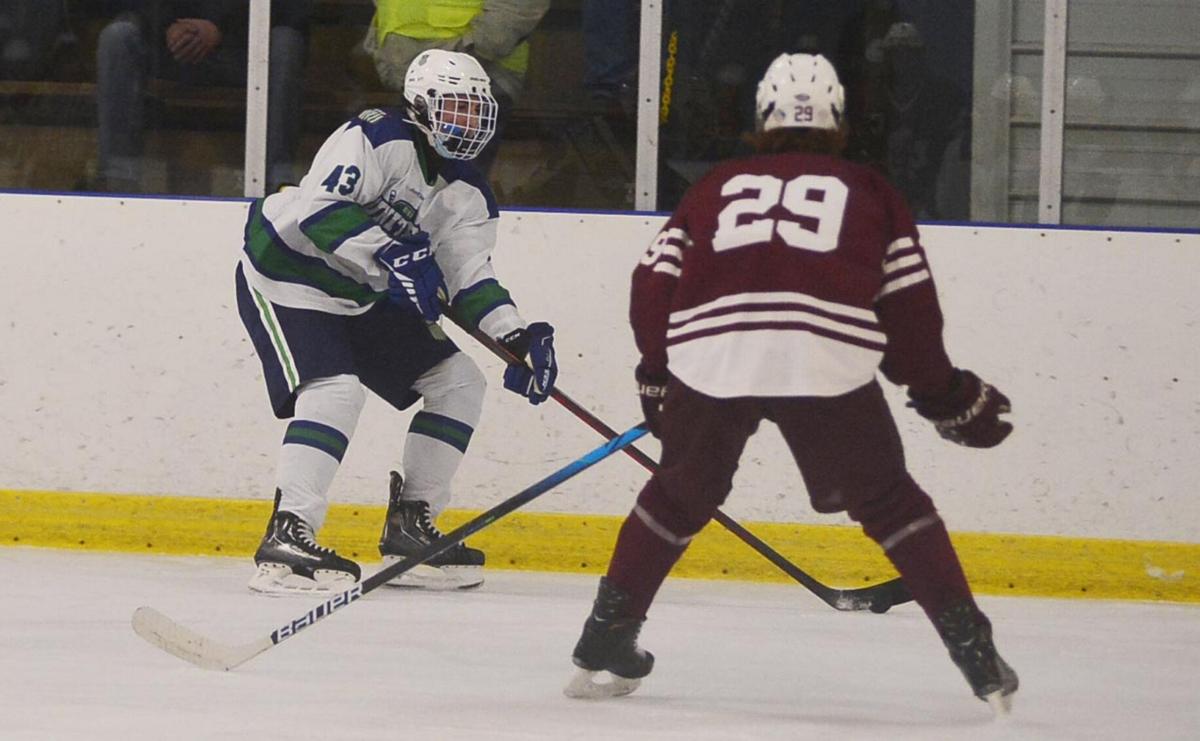 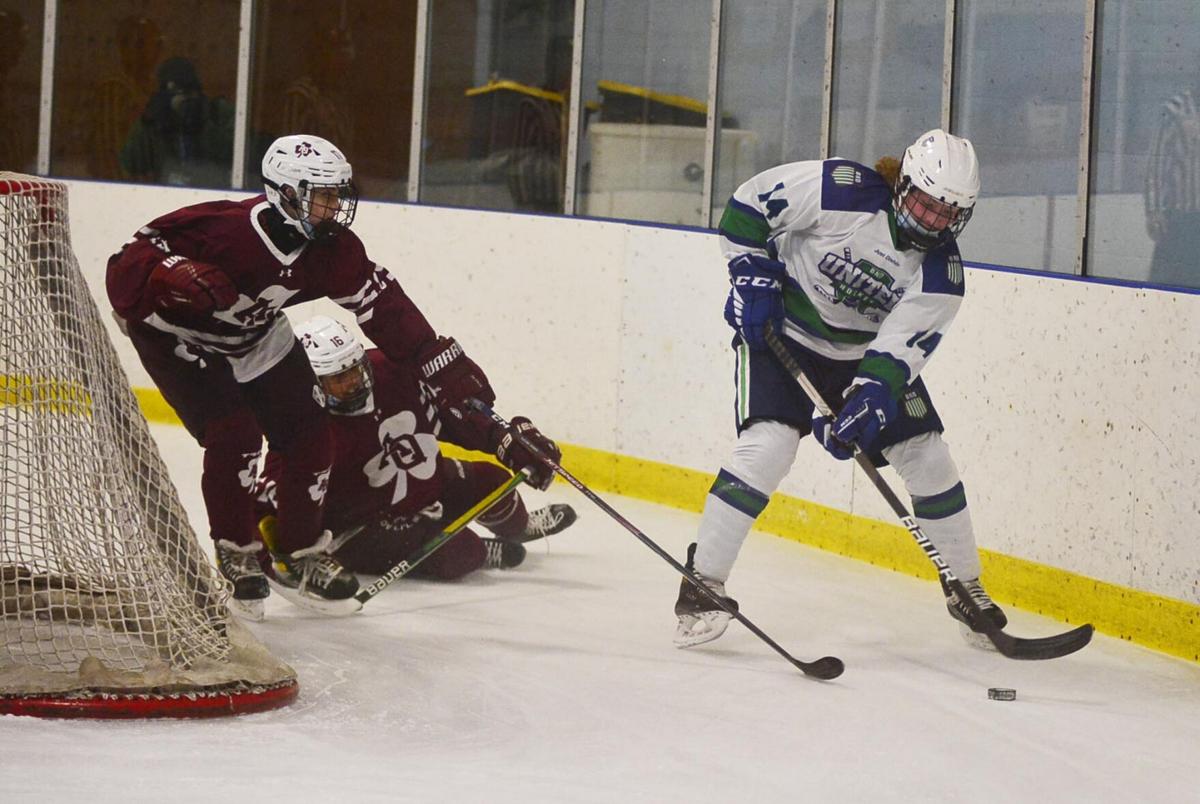 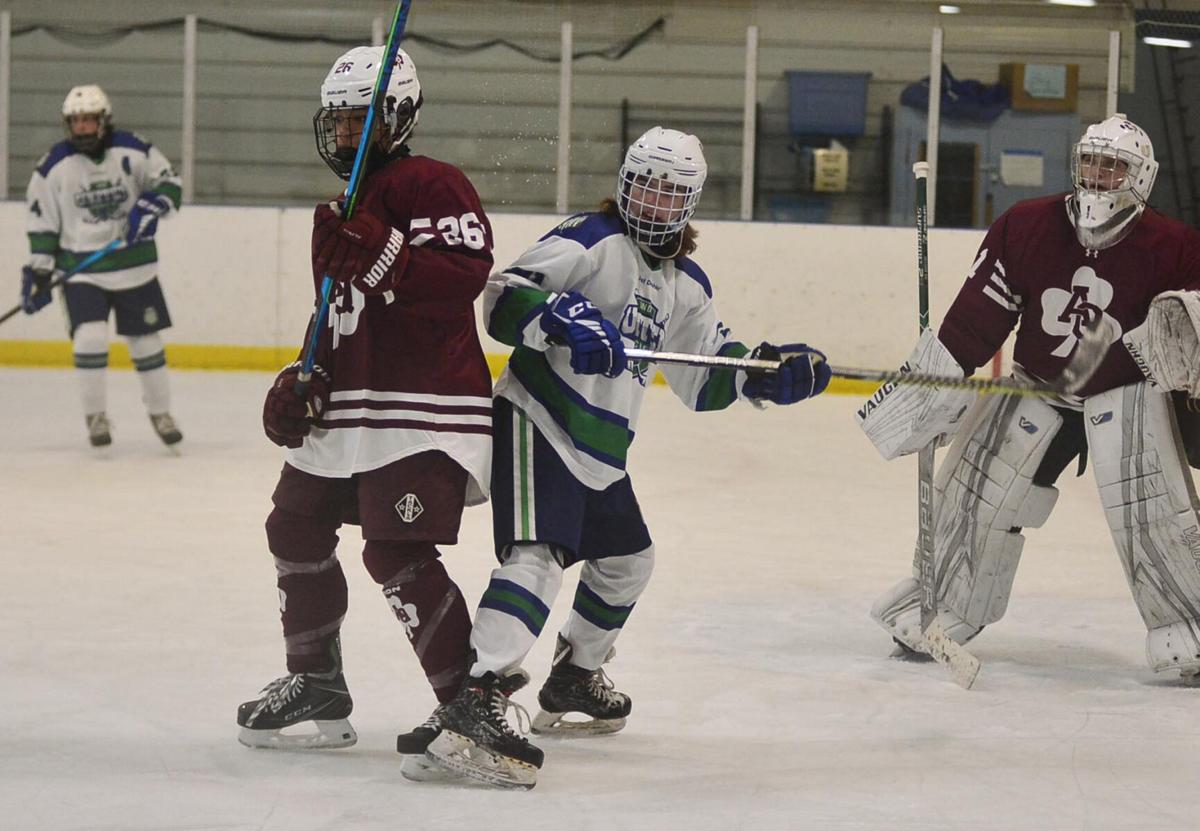 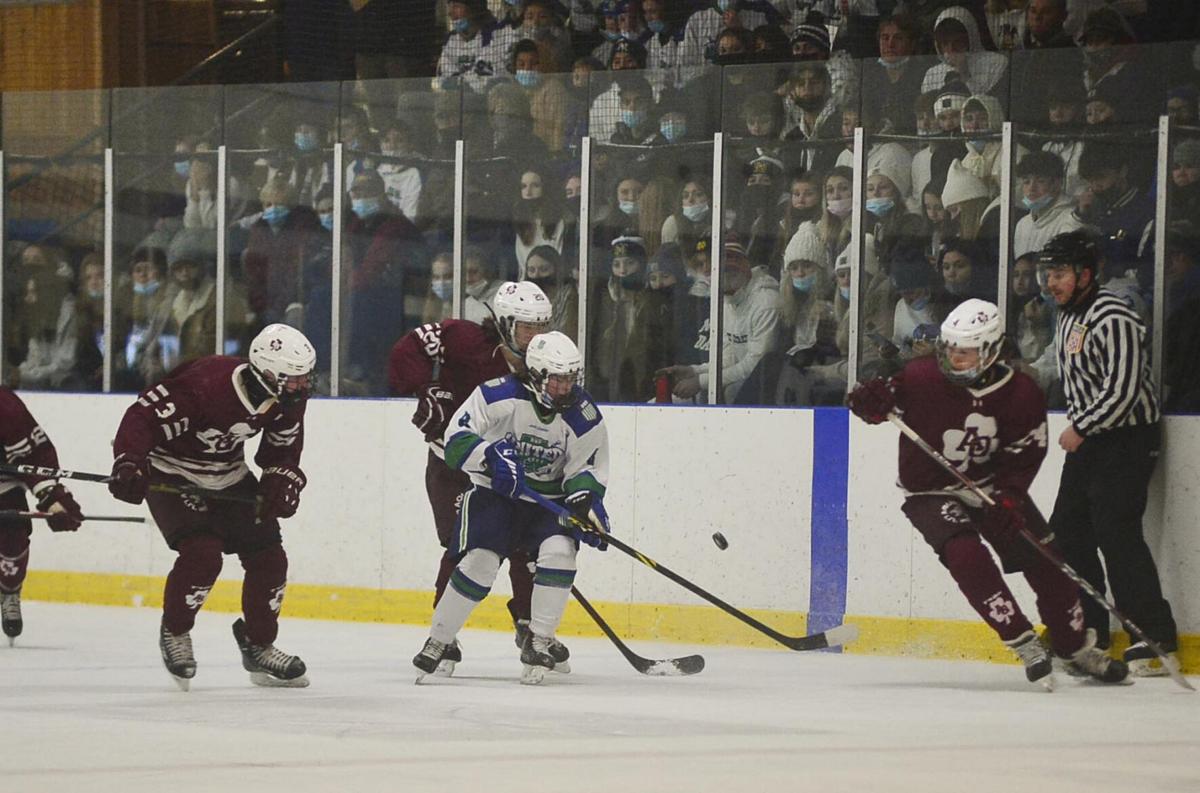 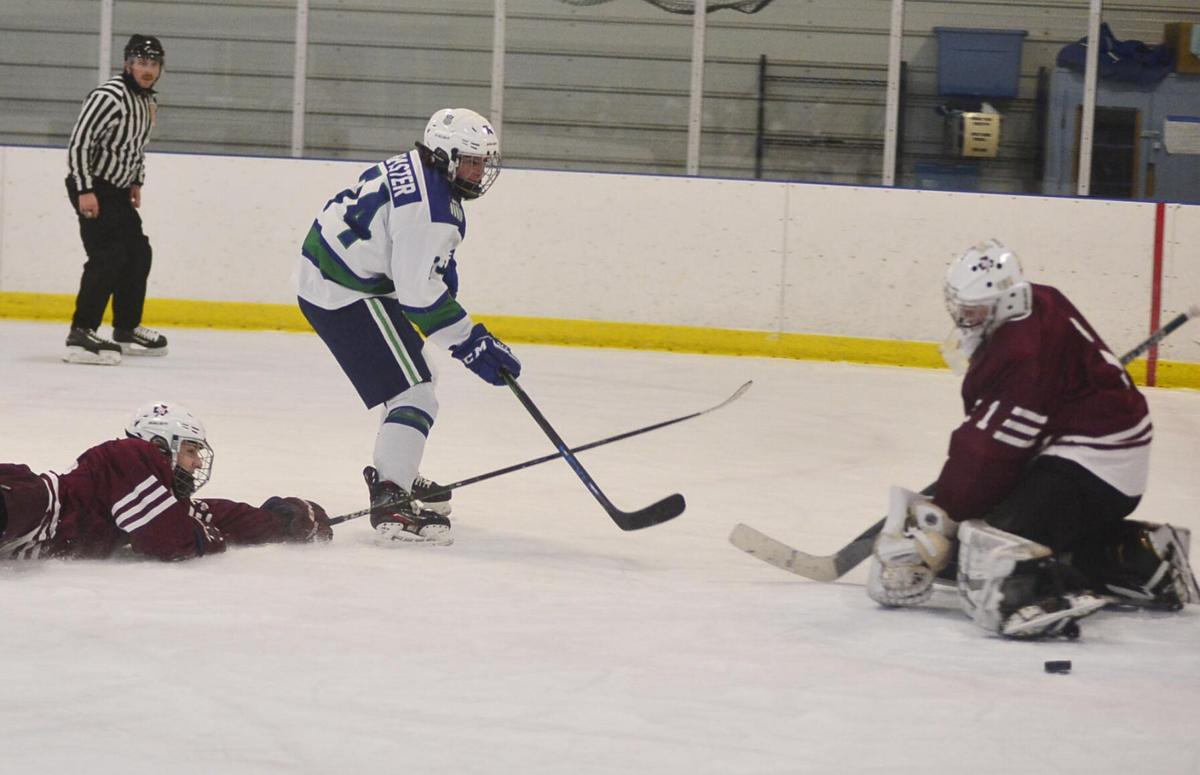 BATAVIA — After decades of playing separately on the same ice, and in many seasons twice a year against each other, the Batavia and Notre Dame hockey teams took to Falleti Ice Arena on Tuesday night for the first time together as a merged team in an official game and the result was a resounding success.

The United scored four times in the fourth period, including the final three goals of the night, as they outlasted visiting Aquinas 6-3 to open up the season on a winning note.

Vincent DiRisio scored what proved to be the game-winning goal midway through the final period on the powerplay off of assists from Andrew Kasmarek and Gavin Schrader. Batavia/ND would then put the game away later in the period when DiRisio scored off of an assist from Ronin Hofmaster on an empty net with just over a minute to play, while Schrader added an empty-net tally of his own 38 seconds later with an assist to Parker Corbelli for the final score.

“When I saw the ref’s hand go up, I knew this might be our last chance on the power-play for the game,” Batavia/ND head coach Marc Staley said. “We called a timeout just to bring the team together and breathe, and relax, just get focused on the moment. I really felt like if we could execute here and put one in the net that might just be enough. It was a complete makeshift powerplay. Without having Zack Eschberger (quarantined) and now Cooper Hamilton (injured) available to us, we called on Andrew Kasmarek to run the top, and Brady Johnson got the nod down low. They went out and executed beautifully and Vinny ended up burying one from the flank.”

Frank Falleti Jr. got the start in between the pipes for Batavia/ND and stopped 26 of 28 shots he saw before he had to leave early in the third period with an ankle injury. Courtney Schum came on in relief and was credited with the win as she stopped six of the seven shots she saw in goal to close it out.

“I thought we played very nervous, especially early in the game,” Staley said. “The gravity of this first ever United game I think weighed on everybody a little bit, coaches included. We all knew it was history in the making. The atmosphere was fantastic. The community support was really special. I thought the kids did a great job and settled into the game as it went on”

The night was marred by a plethora of penalties as Aquinas was whistled for 10 infractions tallying 20 minutes, while the United committed seven penalties for 14 minutes. Batavia/ND finished the night 3-of-7 on the power play, while the Little Irish finished night 2-of-6 with the man advantage.

Batavia/ND got the scoring started less than two minutes into the game when Hofmaster found the back of the net on the powerplay with assists from DiRisio and Brady Johnson for the early one-goal advantage. At the 6:34 mark of the opening period Aquinas tied it on a powerplay goal of its own, from Kevin Howse.

Kasmarek would then light the lamp with just over five minutes left to play in the opening frame for the United — with assists to Schrader and Motyka — as BND headed to the second period up 2-1.

The first 17 minutes of action featured 10 total penalties, with five coming from each team.

Following a back-and-forth first period, Aquinas would net the only goal of the second period 3:16 into the frame when CJ Mangone scored on the powerplay, once again, with assists from Howse and Iesa Mohammed to bring the game to two-all heading to the third.

Again on the powerplay, Hofmaster gave Batavia/ND the 3-2 lead 4:24 into the third with assists from Schrader and DiRisio. However, Aquinas came right back two-and-a-half minutes later when Mangone scored from Mohammed with 10:10 left to play before the United scored the final three of the night.

Batavia/Notre Dame outshot the Little Irish 41-35 on the night, with Aquinas goalie Andrew Gatti making 35 saves on the 39 shots he saw before being removed for the empty net

DiRisio (2G, 2A) and Schrader (G, 3A) each led Batavia/Notre Dame with four points on the night, while Hofmaster (2G, A) added three.

The team now heads up to the north country where they will face off against Canton Central on Friday night at 8 p.m. and then Potsdam High School on Saturday at 3 p.m.

“To be totally honest with you, I’m glad that game is over,” Staley said. “We’ve been looking forward to this for months now. So much work has gone in to making this merger a reality. We’re so thankful for the support of our school boards, our administrators and the tremendous community support behind the new program. It has been exhausting at times but it’s off to a great start. The JV team looks fantastic with two wins and one loss in their first three games, and the first ever BND United’ varsity team won their first game together. It was a special night”