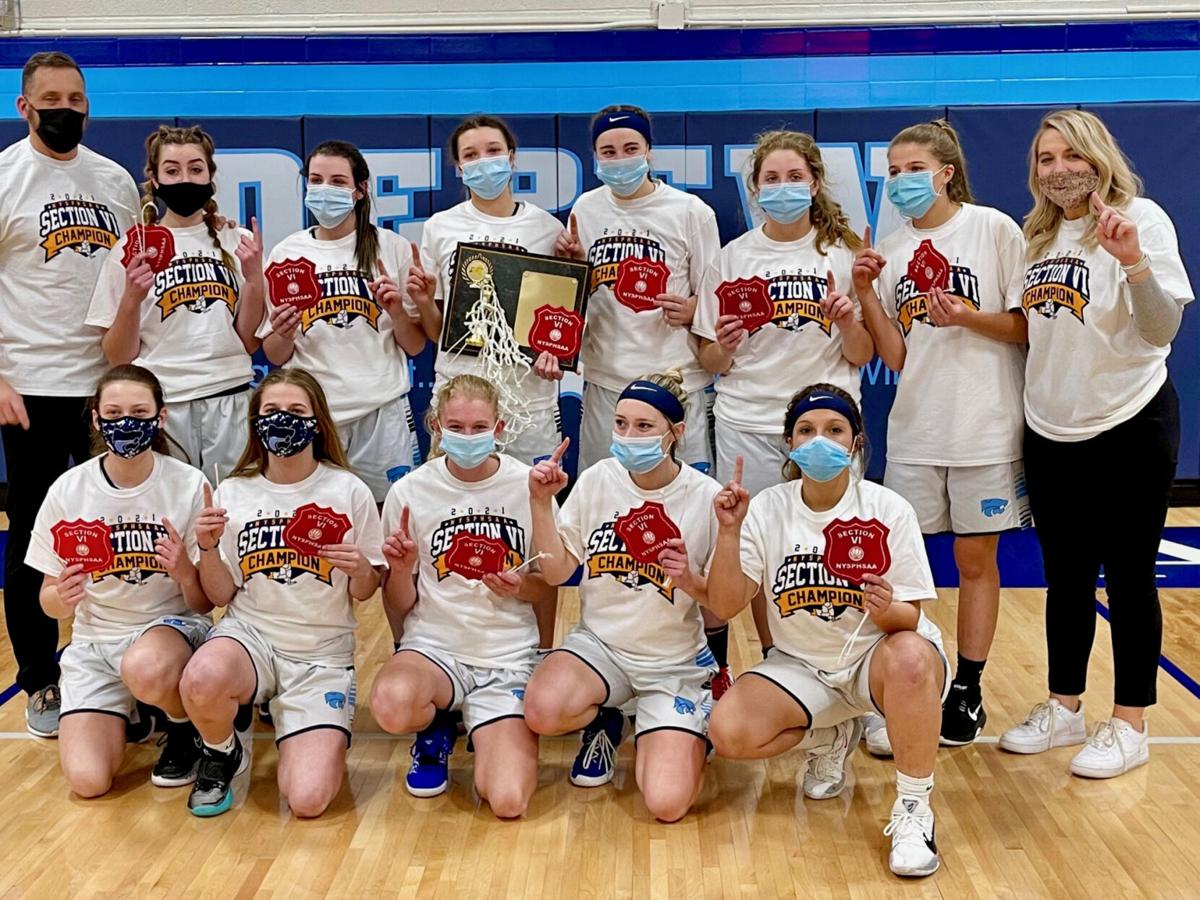 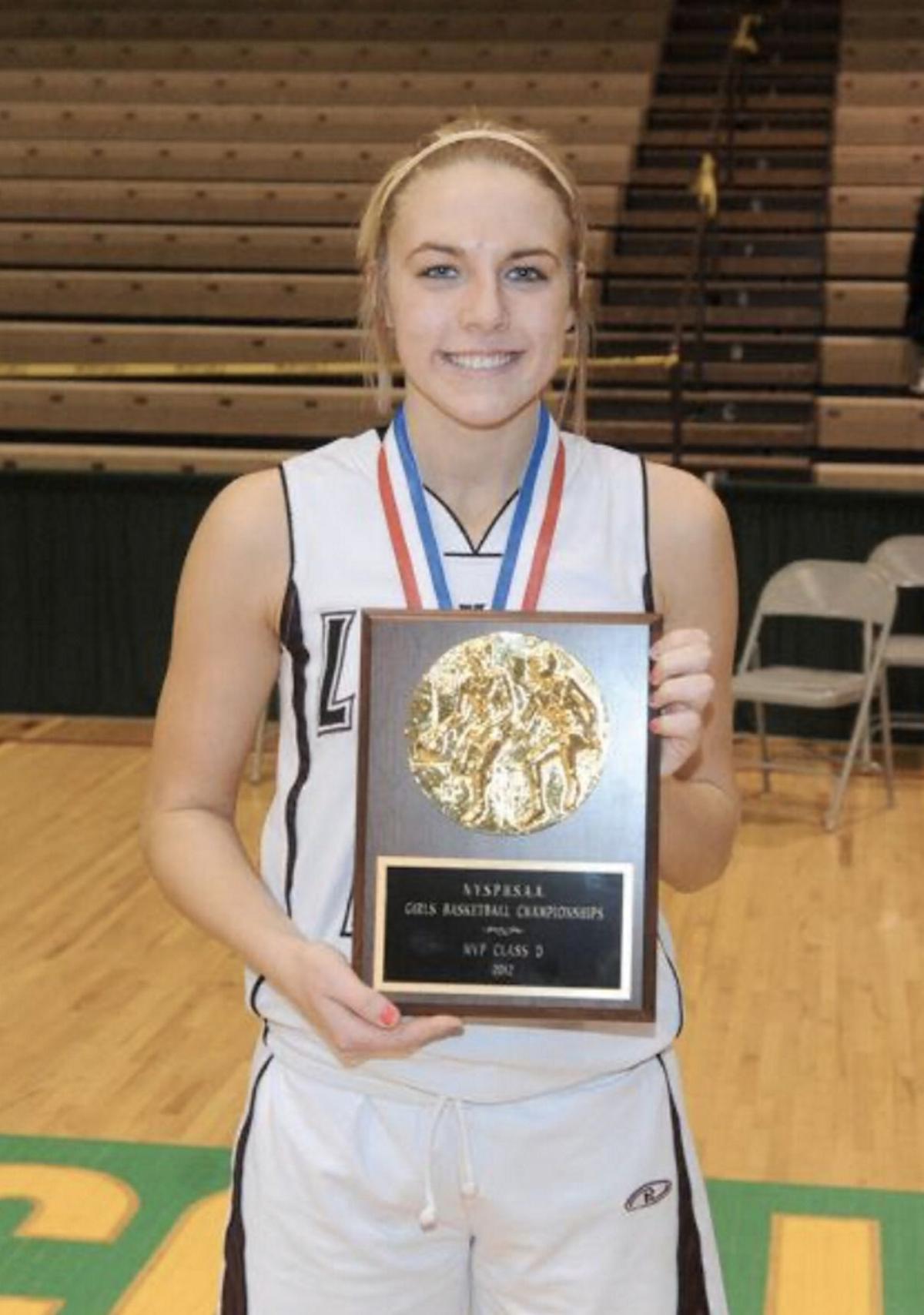 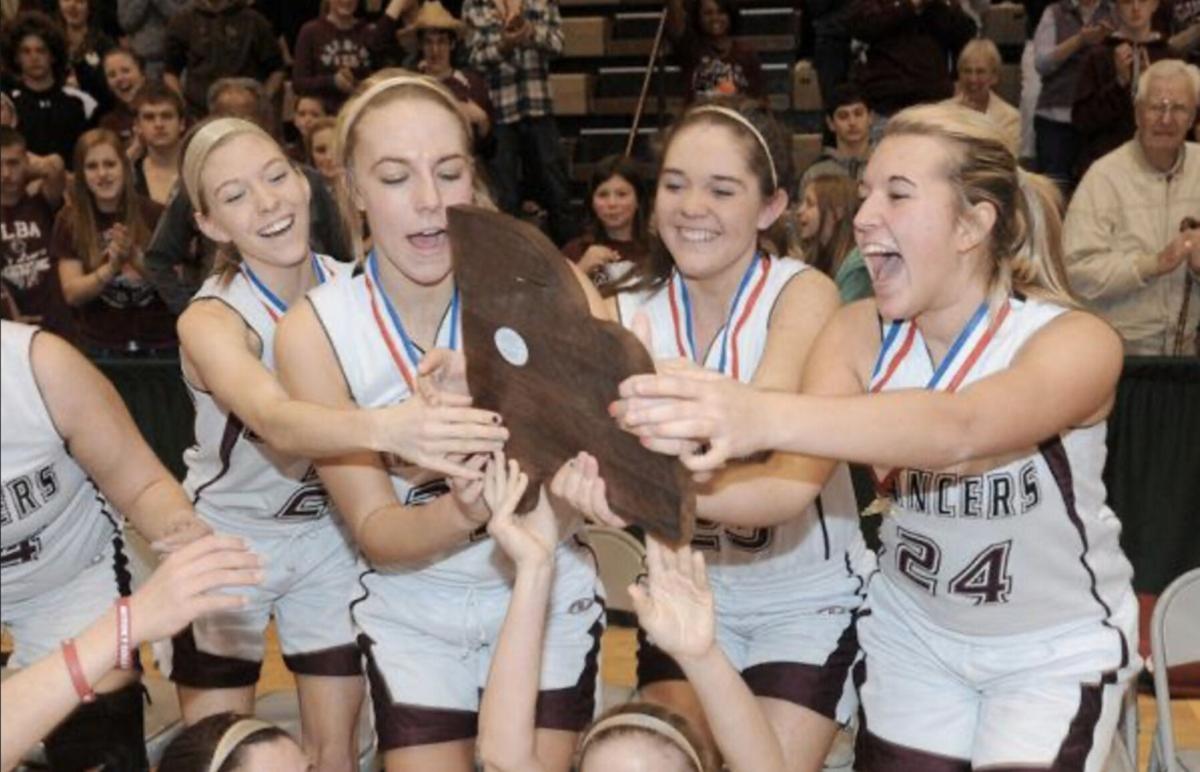 Mark Gutman/Batavia Daily NewsKenzie Bezon was a member of the Class D state title-winning team for Elba in 2012. 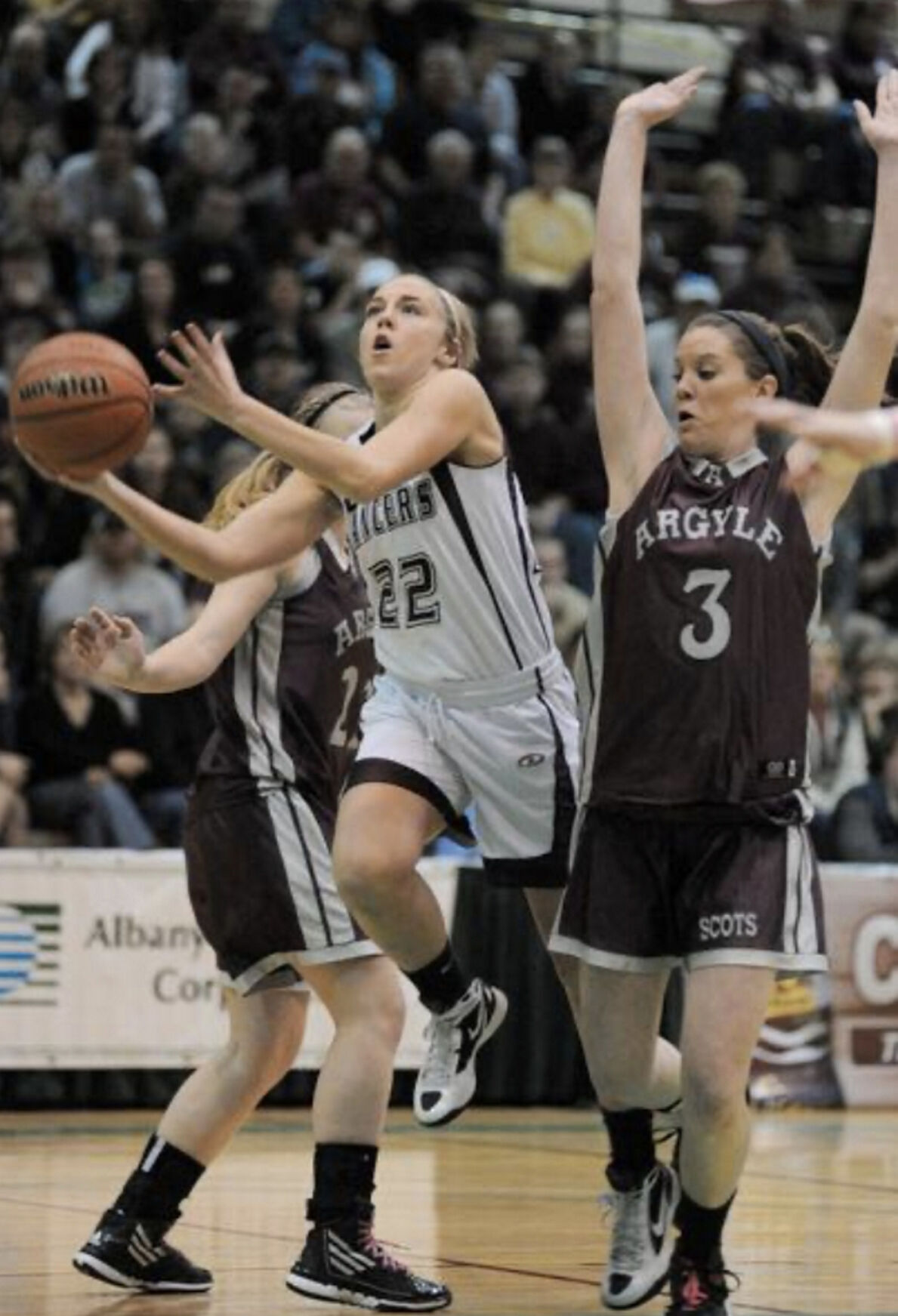 Mark Gutman/Batavia Daily NewsKenzie Bezon was a member of the Class D state title-winning team for Elba in 2012.

DEPEW — During her playing career, Elba alumna McKenzie Bezon found an immense amount of success on the hardwood. Her first season as a varsity head coach was no different.

With the Lancers, Bezon was a four-time Genesee Region League All-Star, a two-time sectional Player of the Year, a three-time Section V champion, an NYSPHSAA champion and NYSPHSAA Most Valuable Player before graduating in 2013.

As a first-year head coach of the Depew girls’ basketball team this past winter, Bezon led the Lady Wildcats to their first Section VI title in 21 years.

During her basketball life, success has followed Bezon wherever she’s gone. And her journey is nowhere near finished yet.

With all that she’s achieved over the years, it’s not the wins and losses that Bezon is most proud of in the end. Particularly with this team, her first as a head coach, she is most proud of the bonds she has created with what she termed a special group of girls.

“Behind every title, there’s so much more than the Xs and Os or stats,” she said. “There are those relationships and memories that will last forever. I think that will always be my favorite thing about winning a title.”

Like most first-year head coaches in the age of COVID-19, Bezon’s introduction to leading a varsity squad was anything but conventional.

The process began in June when she received a call regarding the head coaching position at Depew. But with so much still up in the air due to the worldwide pandemic, it remained unclear whether or not high school sports that had been deemed high-risk would take place this season.

For Bezon, it didn’t set in that she had got her first head coaching job until mid-January when she received a call from Depew Athletic Director Bob Skoczylas, informing her the season was indeed moving forward. With just a week and a half between that phone call and the beginning of the regular season, Bezon began to kick things into overdrive.

Although she wouldn’t be able to hold an in-person meeting with her girls until the first practice of the season, Bezon immediately gathered her new squad on Zoom and began to discuss their plans for the upcoming campaign.

“I had a virtual meet and greet with them as soon as I heard the season would be starting. During that meeting, I presented them with this year’s motto. Our motto was ‘buy-in,’” said Bezon. “Buy-in to this short condensed season. Seniors, buy-in to your last season as a Wildcat and leave your mark on this program. Underclassmen buy in to start building the framework of this new program.”

It wasn’t long before her new squad began to do just that.

“There were days I would leave practice and be like ‘wow, I really just threw a lot at them.’ But the next day, they always amazed me and implemented every game plan,” said Bezon. “They also are just outstanding individuals in general, which made coaching and practice so much fun. Without a doubt, I was truly spoiled my first year with such a fun and amazing group. I truly couldn’t have asked for a better group.”

Bezon’s new squad came equipped with a boatload of varsity experience - 29 years between 11 players. The top two scorers for the Wildcats, both underclassmen, combined for seven years of varsity experience. Sophomore Kaylee Krysztof averaged 18 points per game this season to lead Depew, while freshman Mia Vannelli added 16 points per contest. Krysztof and Vannelli have each been on the varsity squad since their respective seventh-grade seasons.

Six seniors graced the Wildcats’ roster this year. But with their driving forces being two underclasswomen, Bezon was unsure what to expect from her squad during those early days in January. However, as the season progressed, it wasn’t long before the first-year head coach began to believe this could be a special season.

“Our first game, the girls blew me away with their hustle and desire to win. Then as we continued our season, I just saw that desire to win continue to grow each game,” said Bezon. “Last year, this same team went .500 — they only lost one senior. When we started to continue to win, I started thinking to myself that this could be a special group who really likes to win because they haven’t experienced this many wins before.”

As the Wildcats moved past the more challenging games on their schedule, it became clear to Bezon that this was a team destined for greatness.

“As we got into tougher games and matchups, they stepped up to every challenge and really learned how to win tough games together,” she said. “Each week, as a team, we loved to make small goals, and each week they were achieving those goals. So that’s when I really knew this team could do something special and go as far as they wanted to if they continued to have that same desire and determination.”

The Wildcats did just that and finished the season with the school’s first sectional title in girls’ basketball in two decades.

“This title means so much to me because all I can really think about is how this team came together and their determination to make Depew a force to be reckoned with,” said Bezon. “The amount of work this team has put in goes to show what it takes to be a champion and shows our future Depew Lady Wildcats that this could be them one day if you buy in, put in the work, and have some fun along the way.”

Since winning her first sectional title as head coach, colleagues, friends and family have showered Bezon with praise. But in her eyes, she was a small piece of what her team accomplished this season.

“So many people have come up to me saying what an accomplishment it is to win sectionals your first year as head coach - and it really is; I’m still trying to let that set in,” said Bezon. “But I can’t even take all the credit. To me, it was that team - I gave them the tools and foundation and they built something really special.”

Those tools that she brought with her to Depew were learned during Bezon’s many years playing as a member of the Elba Lady Lancers girls’ basketball program.

When you ask her about her time spent at Elba, the passion begins to flow out of her.

“Playing at Elba has so much to do with my love of basketball,” said Bezon. “I think if I grew up in any other community, I wouldn’t be where I am today. Elba and its community are unlike anything else.

“I think it’s something really special that every time you read an article where an Elba student-athlete is being interviewed, there will be a line without a doubt about the Elba community and its support. Even coaching at Depew, it’s crazy the love and support that my team and I got from the Elba community. There were over 700 views of our sectional final game. I know without a doubt in my mind that a good amount of those views were Elba community members. The messages and texts I got after the game were unbelievable and I truly couldn’t be more appreciative towards my community.”

“I grew up going to games and practices, and there has always been this grit that Elba puts out there that is contagious,” she said. “Growing up watching sectionals, driving down to Albany to cheer on state contenders, it makes you wholeheartedly wish that that will be you one day. I think that’s why Elba’s so successful.

“As little kids, you’re constantly going to games watching these girls hustle and show the determination and grit it takes to be a Lady Lancer. Then to grow up and carry on that same grit and determination as those amazing women - I was fortunate to experience winning division titles and sectional titles. So as the coach of Depew, I wanted nothing more than my players to experience those same amazing opportunities and to experience the love for basketball that I’ve always had thanks to Elba.”

It took one year for Bezon to accomplish her mission.

Less than 12 months into her head coaching career, the new head coach at Depew has instilled a love for the game and a championship tradition that is sure to catch on quickly throughout the community.

Success is contagious. So is passion.

Bezon has quickly spread both like wildfire throughout the Depew girls’ program and her efforts helped carried the Wildcats to a season for the ages.