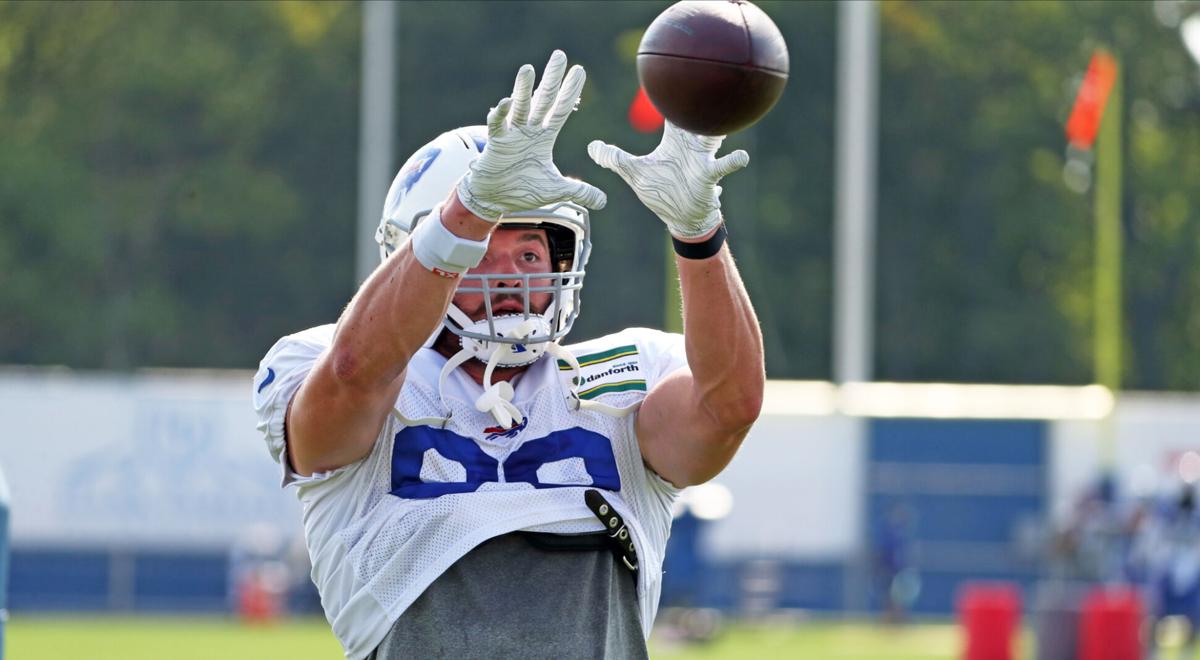 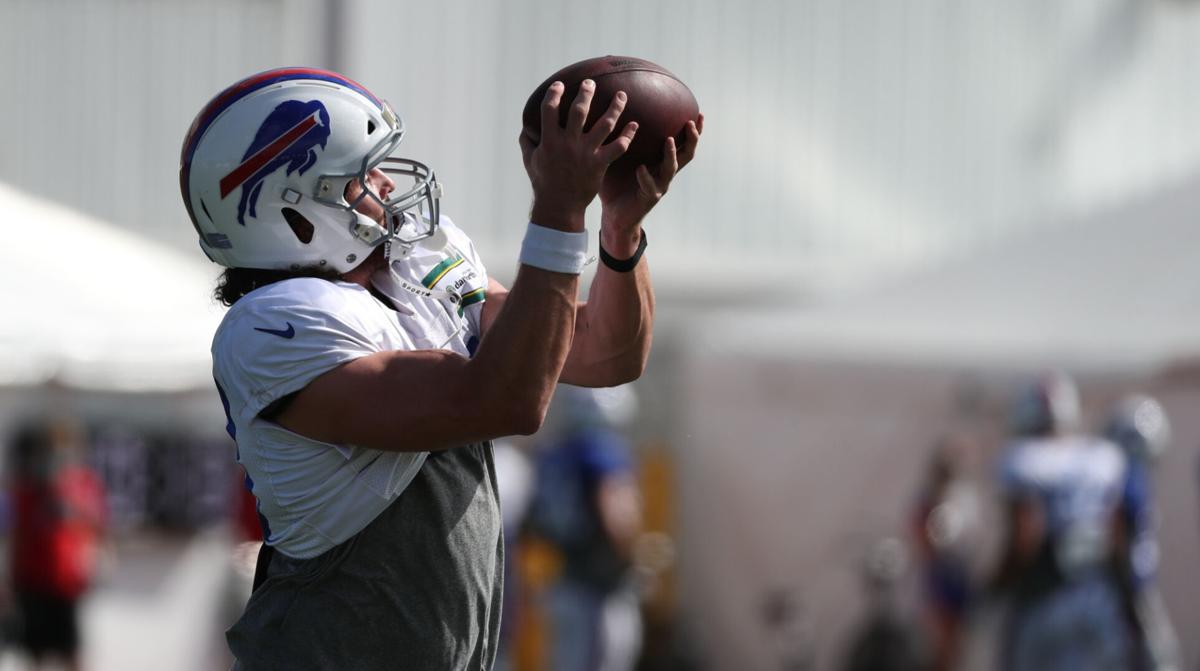 ORCHARD PARK — Dawson Knox put forth an admirable effort during his rookie season, finishing with 28 catches for 388 yards and two scores, but there were elements of his game that the Bills second-year tight end feels were lacking.

“During my rookie year last year I was just trying to make sure I knew where to line up, I knew where to run my route and what to look for in the defense,” said Knox early on in training camp. “Because going from having a limited offense to Coach (Brian) Daboll’s offense was a night and day difference.”

The change in the difficulty of the offense in which he was playing led to some growing pains for Knox during year one.

“Last year, for me I felt like I was playing slower... It was like every day was a new install so every piece of info was new,” he said in a video conference earlier this week. “So I was really trying to wrap my head around the plays, where I’m supposed to be, what I’m reading on the defense and all that came before actually going out there and doing the job - making the block, catching the ball, getting upfield.”

Now with a year under his belt, Knox believes he is ready to make a big jump toward becoming a more consistent, more effective player for the Bills.

“I’ve kind of realized how it’s less stressful for me just from learning the plays. This year it has really slowed down for me,” said the Bills tight end. “I feel like when the play is called, I already know the assignment, the reads I’m looking for...so I think it’s just been a lot easier to mentally go out there and play faster.”

Along with his knowledge of the playbook, Knox’s chemistry with Bills third-year quarterback Josh Allen is also something that he believes is growing.

Another added element that Knox believes will help him, and even Allen produce more consistently this season, is the addition of new Bills’ No. 1 receiver Stefon Diggs.

“I think that if they’re concentrating on him a lot it might open a one-on-one match up with me that’s favorable - whether its a linebacker or a safety,” said Knox about the addition of Diggs. “We’ve got a lot of motions in (our offense) so Josh can see the coverage before the play is started, so I think it’s going to be really dynamic the way (Diggs) can affect the ways that Josh is going to be able to distribute the ball this year.”

While Diggs’ presence in the Bills’ offense may allow him to flourish, Knox also understands, with all the talent the Bills have brought in on the offensive side of the ball this offseason, opportunities may, at times be at a premium. The Bills not only brought in the former Minnesota Viking but also drafted rookie running back Zack Moss and rookie wide receivers Gabriel Davis and Isaiah Hodgins, who will make the Buffalo pecking order on offense even more crowded.

With that said, Knox, who endured a difficult journey on his way to the NFL, says his past has prepared him to make the most of his opportunities, even if they are limited.

“I had a unique story in high school - I never really played,” said Knox. “I was really undersized, finally grew my senior year then dislocated my ankle. I got to college as a walk-on, finally got to where I was playing there but obviously, I didn’t have a whole lot of production.”

Knox played alongside teammates, wide receivers D.K. Metcalf and A.J. Brown at Ole Miss University, both of who enjoyed successful college seasons and have gone on to successful starts to their pro careers with the Seattle Seahawks and Tennessee Titans respectively. Their presence within the Rebels’ offense did not allow Knox to truly spread his wings. However, Knox says it’s all about remaining confident and ready for when your number is called.

“I think it’s always just a battle between you and yourself of, am I confident enough in my abilities even though I’m not getting the production that I want, or know that I could have?” added Knox. “Also at the same time, it’s just being unselfish, knowing whatever is best for the team that week.”

In the end, for Knox, it’s not about personal statistics, but rather it comes down to winning on Sunday.

“Personally, if we win the game, I’ll be happy with 10 catches, I’ll be happy with zero catches as long as I’m doing my job right,” said Knox. “The ball is going to be spread around a lot...selfishly we are (all) going to want to have three touchdowns each and 100 yards receiving, but obviously that’s not realistic.”

Knox says he and his teammates’ focus rests solely on attaining the Bills’ ultimate goal.

“We have every piece that we need to go win a championship and I think that’s what everyone is focused on,” added Knox. “I don’t think anybody’s worried about a lack of touches or anything like that.”

With Week 1 against the New York Jets fast approaching, Knox mentioned how important starting the season on the right foot will be to their journey toward reaching their goal of playing championship-caliber football.

“We always talk about how important it is for us to start fast whether its the first possession of the game of just the first game of the season,” concluded Knox. “I think everyone is dying to get back out there because we have only been playing against each other the past few weeks...so everyone is itching to get out there and start hitting somebody (else).”

It all starts next Sunday when the Bills take on the Jets in their ‘20 season opener at Bills Stadium.