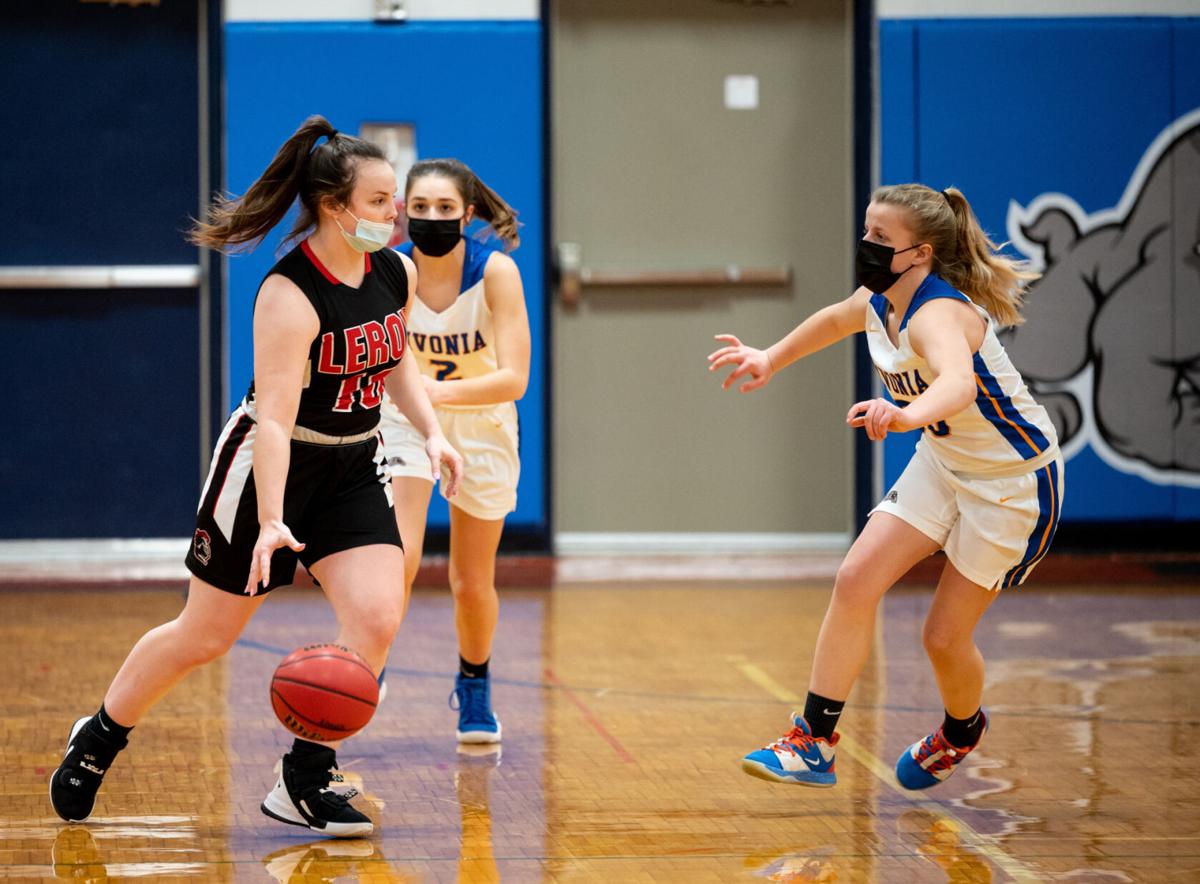 Photo by Lindsey Meys Le Roy's Bryn Luckey looks for room as she is guarded by Livonia's Jillian Genthner (2) and Kelsey Stewart during Monday's LCAA game. 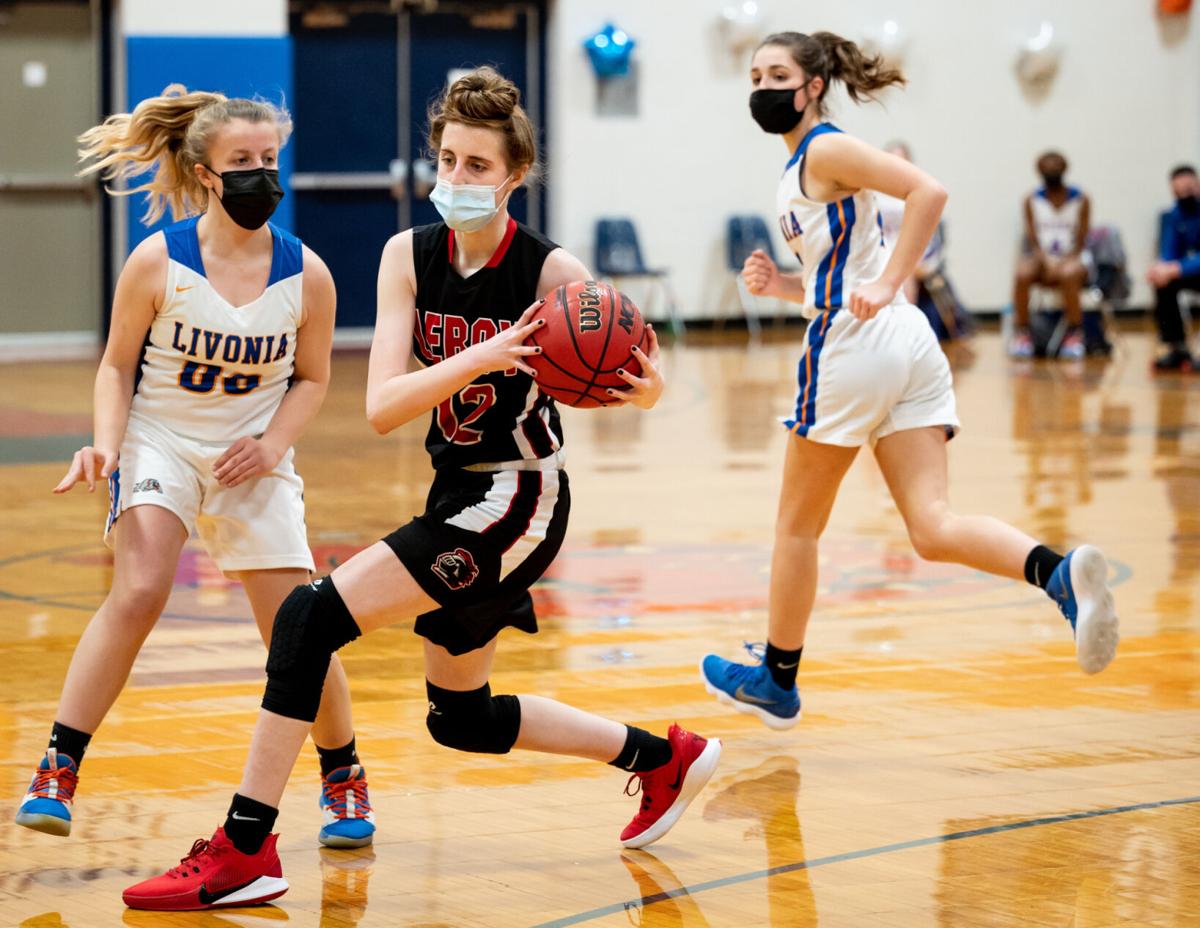 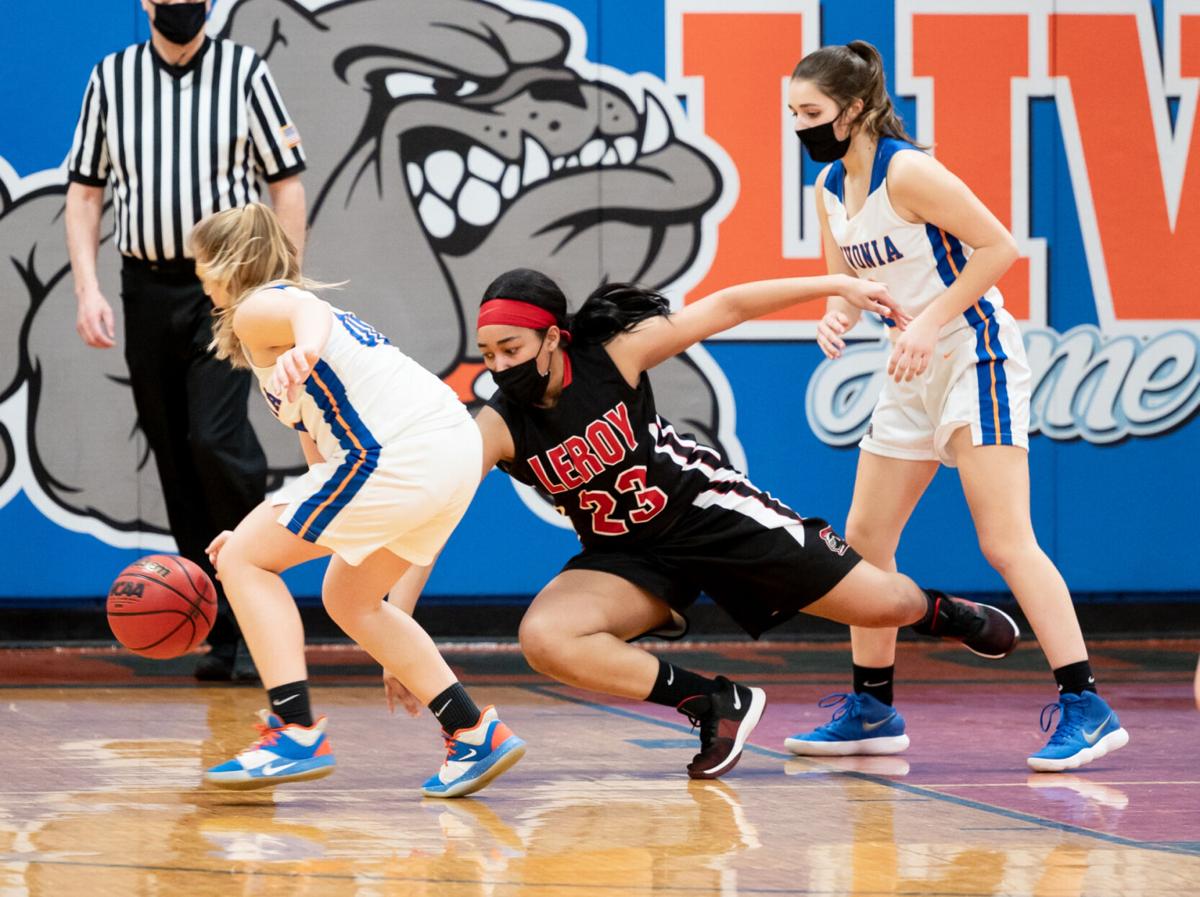 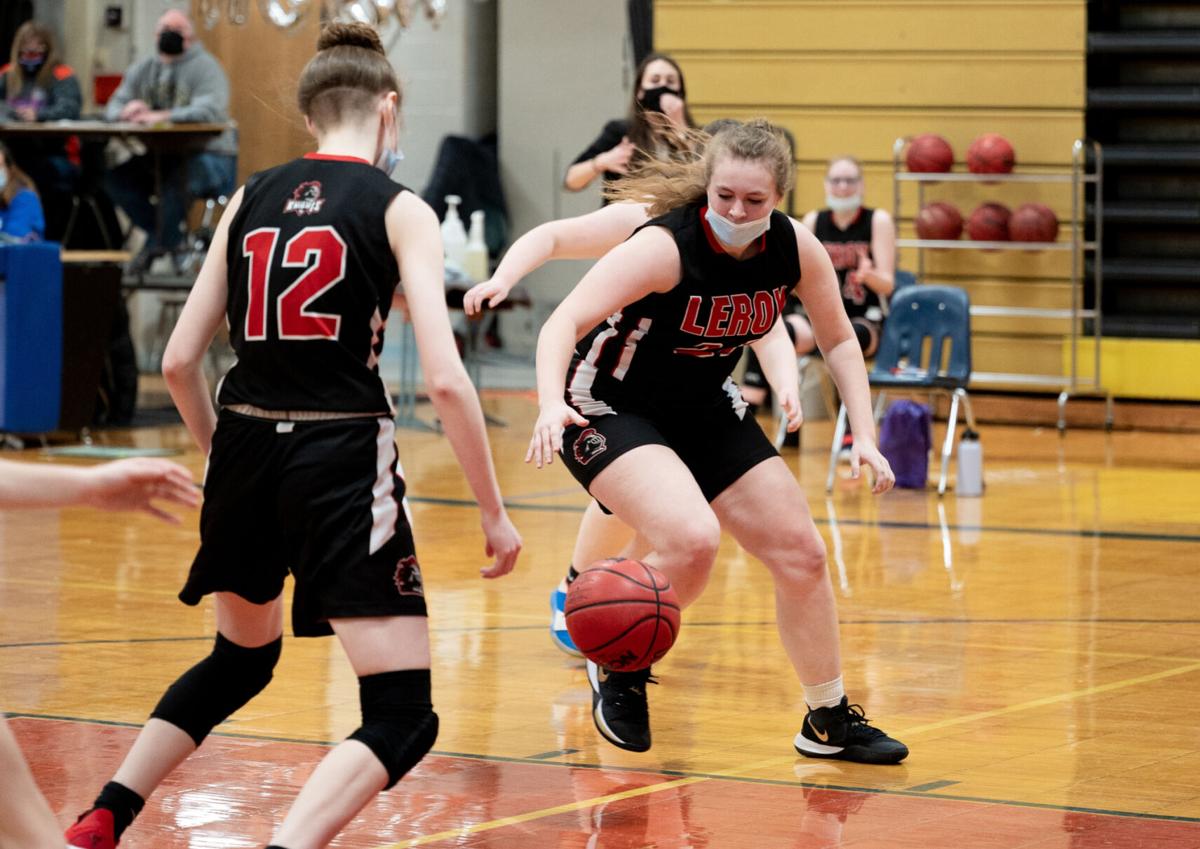 Photo by Lindsey Meys Visiting Le Roy came up short during their game at Livonia Monday. 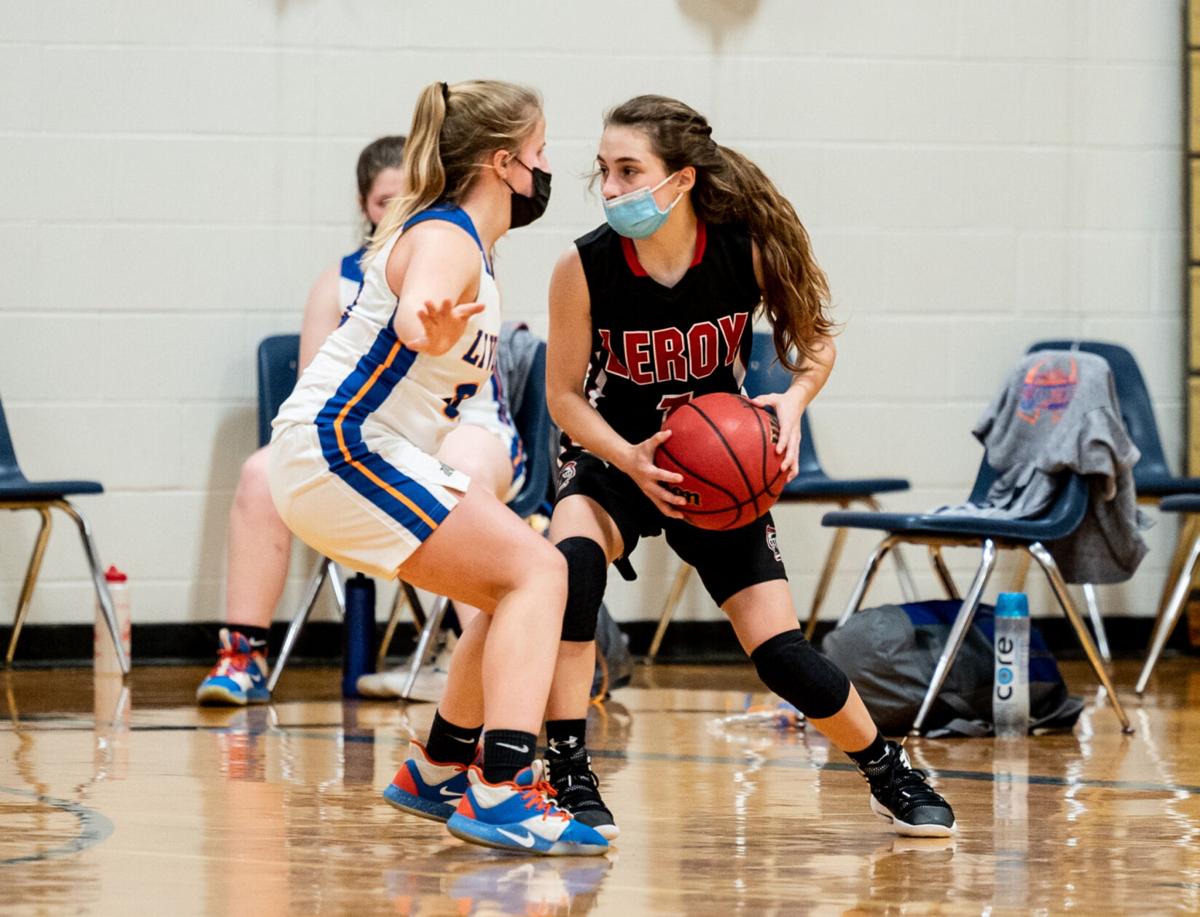 Photo by Lindsey Meys Le Roy's Bryn Luckey looks for room as she is guarded by Livonia's Jillian Genthner (2) and Kelsey Stewart during Monday's LCAA game.

Photo by Lindsey Meys Visiting Le Roy came up short during their game at Livonia Monday.

Tangeman knocked down 12 shots from the floor and also went 5-of-7 from the charity stripe.

Mackenzie Ryan had a big game as well as the senior garnered a double-double with 13 points and 10 rebounds for Warsaw,who led 22-17 at the half.

The score was tied at 43-all after regulation.

For Perry (1-1), McKenna Kelly led the way with 18 points while Alexandrea and Jessica Marusarz both netted 12.

After losing 13-0 on the soccer pitch this past fall, visiting Pavilion turned up the heat on the basketball court Monday afternoon as the Lady Gophers jumped out to a 23-3 first period lead, extended it to 45-7 at the half, and then called off the dogs leading 65-11 after three, as they rolled to an easy LCAA D-III victory.

Sophomore Karlee Zinkievich was sensational as she had a near triple double with 16 points, 11 assists and seven steals.

Host Avon got another monster game from 6-foot-2 sophomore Sarina McDowell who scored a game-high 26 points and grabbed 25 rebounds with six steals as the Lady Braves (2-0) got the victory over Letchworth (0-2) Monday.

Avon jumped out to a 13-4 first quarter lead and never looked back. They led 25-7 at the half.

“First off, good game by Avon — they are well coached and have a great blend of size and speed,” said Letchworth coach Mike Grasso. “They will be a tough out come sectional time. I can’t knock our effort, the kids played hard, but just could not get a ball to go in the basket. We have to continue to improve and I know eventually, the ball will start to go in the bucket.”

Ray Young dominated her way to 29 points and 13 rebounds as host Dansville (2-0) cruised to the LCAA D-I victory.

Dansville led 28-17 at the half before a 17-4 third period run pretty much sealed it.

For Bath (1-1), Abby Spiess led the way with 12 points while Meredith Czajkowski and Keegan Smith both netted six.

And Lillian Hoyt was red-hot.

The Hornell eighth-grader hit 9-of-11 three-pointers and scored a career-high 31 points as Hornell cruised to the victory Monday night.

Jaden Sciotti added 23 points while Juliet Marino added 14 as the Red Raiders improved to 1-2 on the season.

Cal-Mum (2-1) used a balanced scoring attack and a fast start to jump on Keshequa 15-5 after one quarter and hold off several challenges from the Indians early in the third quarter to get the LCAA D-III win.

For the game, DeVore led all scorers with 16 points and added 12 boards for her first ever double-double.

Nickerson added 13 points and grabbed nine caroms for a near double-double.

Keshequa rallied in the second and early third quarter to cut the C-M lead, which was 10 at the half, down to six on the offensive work of Libby Benner who had nine points in the second quarter and Ava Thayer who had five in the third.

Cal-Mum answered the run as DeVore added six in the frame and senior Haley Sherwood netted four on senior night.

C-M finally pulled away in the fourth as Taylor Mills and Ava Amorese each added a bucket, giving Mills eight for the game and Amorese five points.

Keshequa (0-2) was led by Benner and Thayer who had 12 and eight points respectively. Benner also added nine rebounds while Thayer dished out three assists.

Sydnee Emerson led the way with 16 points and three steals while Kaitlyn Holland had a nice double-double with 11 points and 16 rebounds.

Mt. Morris (0-2) was led by Sierra Somers with a game-high 20 points including five 3-pointers.