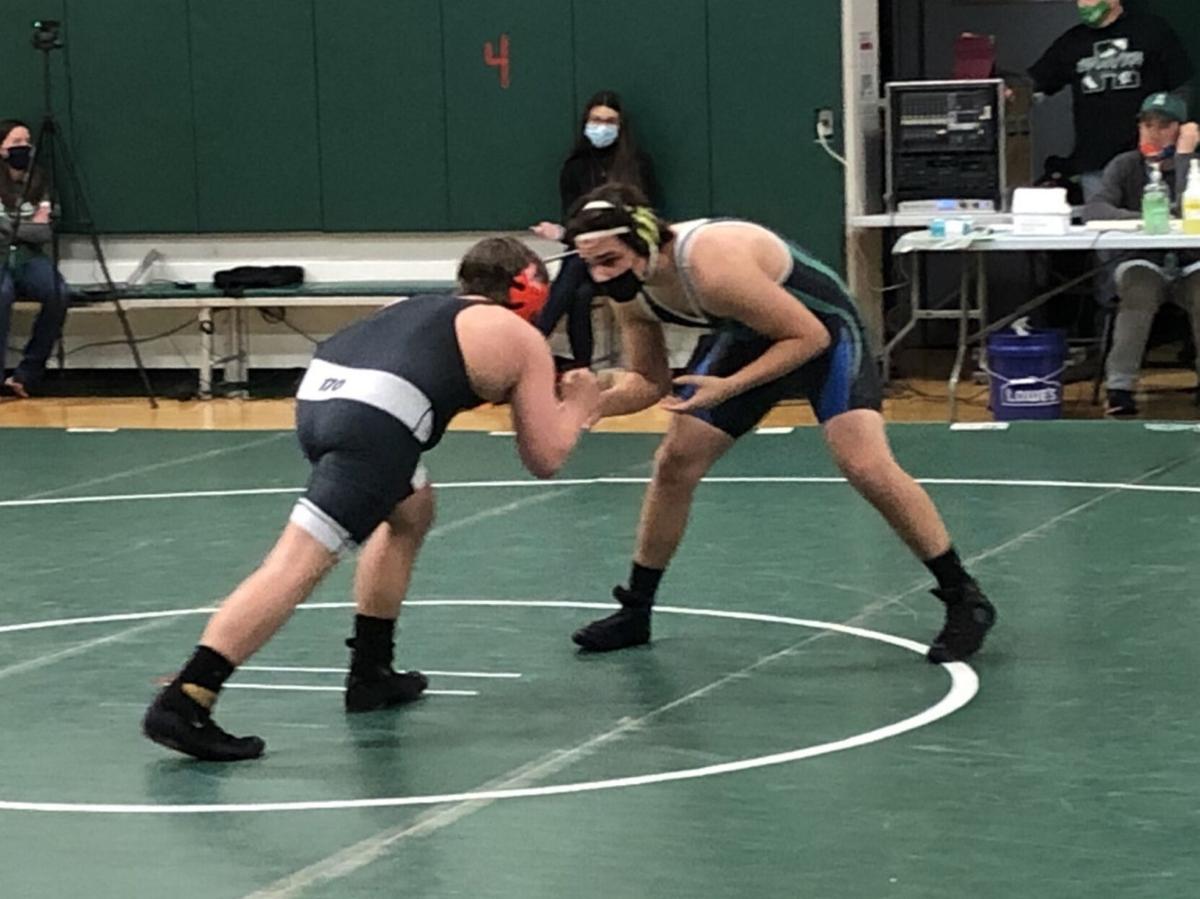 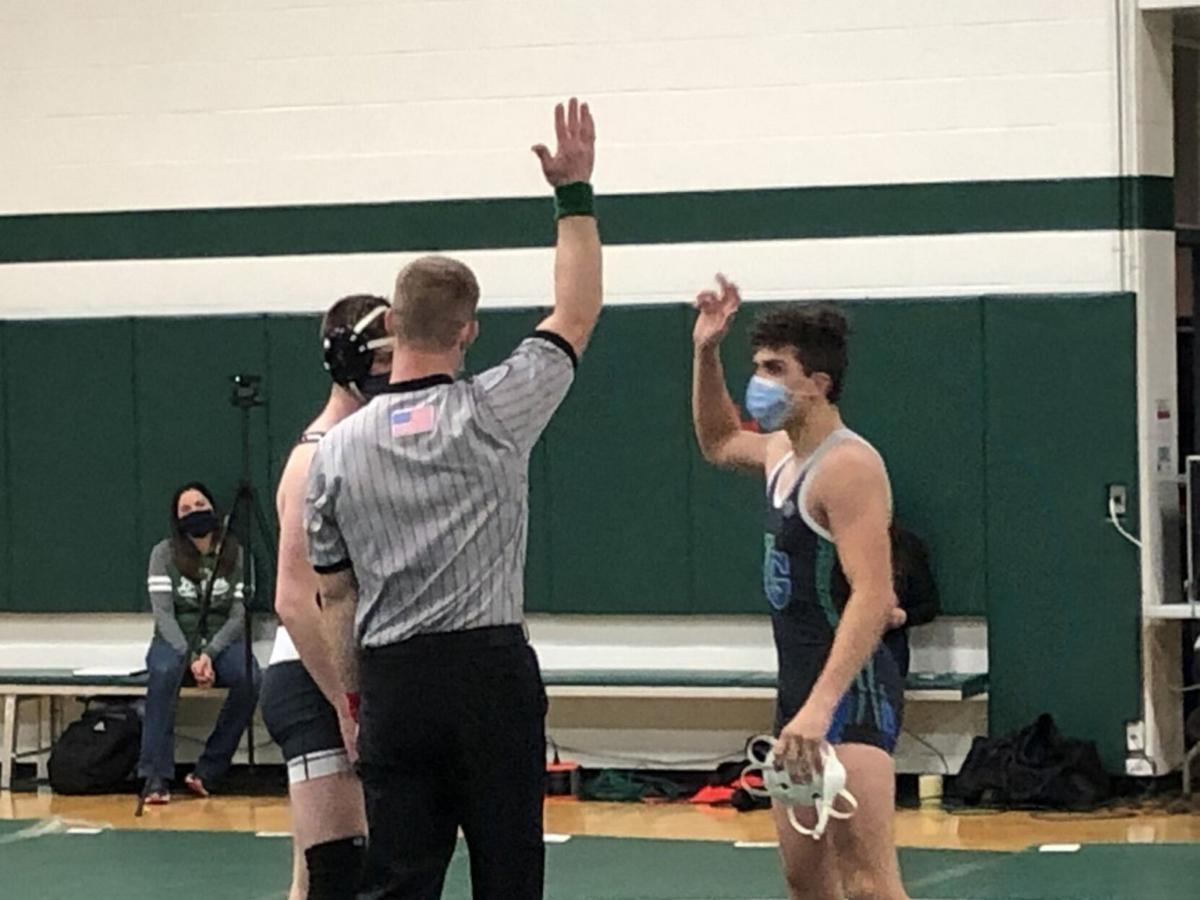 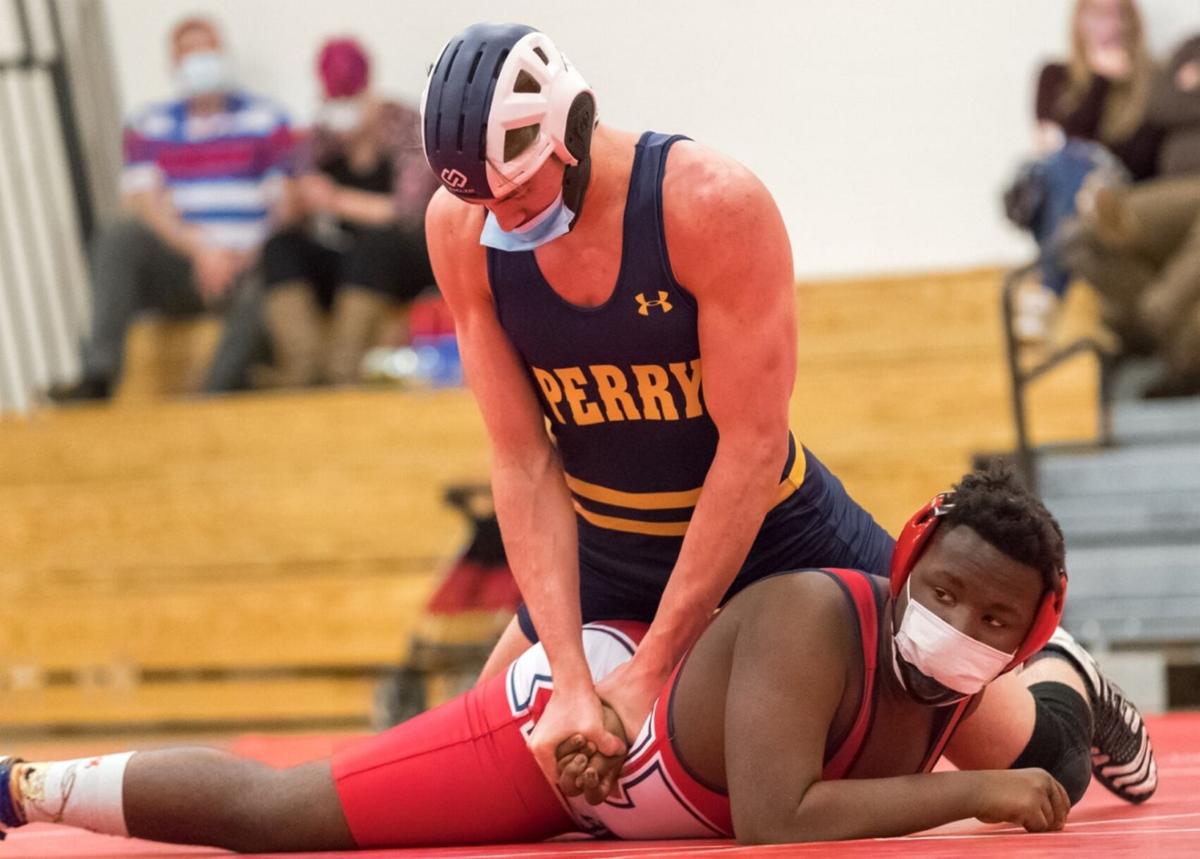 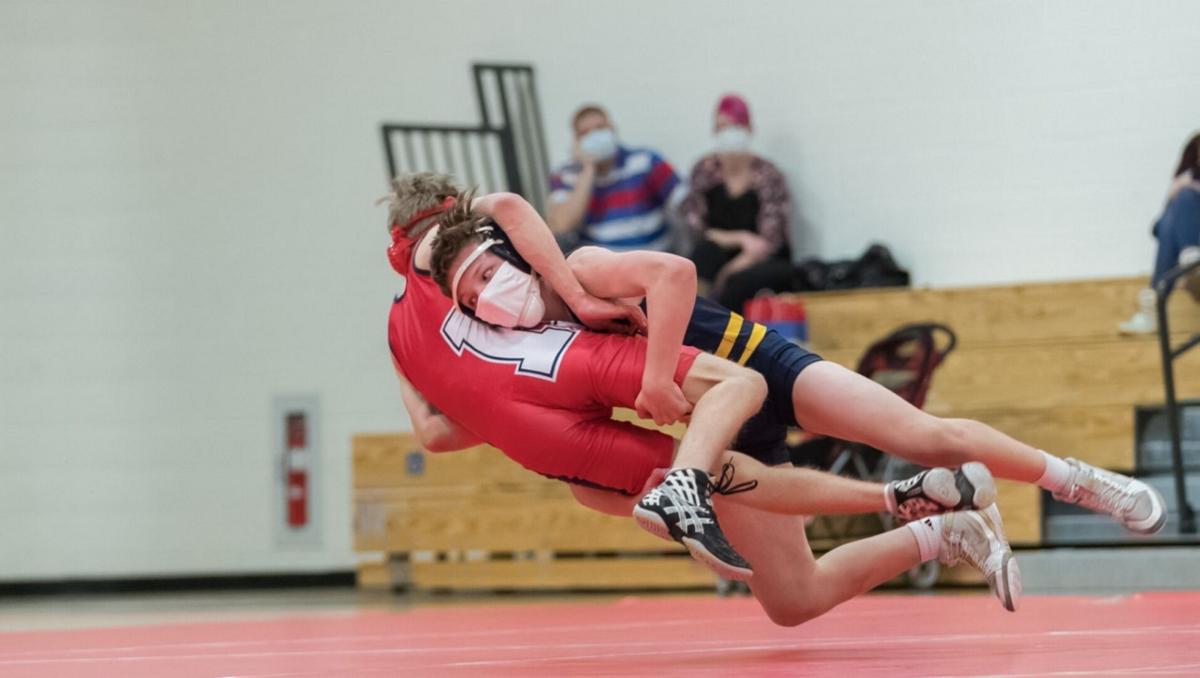 Photo by Steve Harrison Perry’s Noah Leitten gets in on a double during his victory Tuesday night. 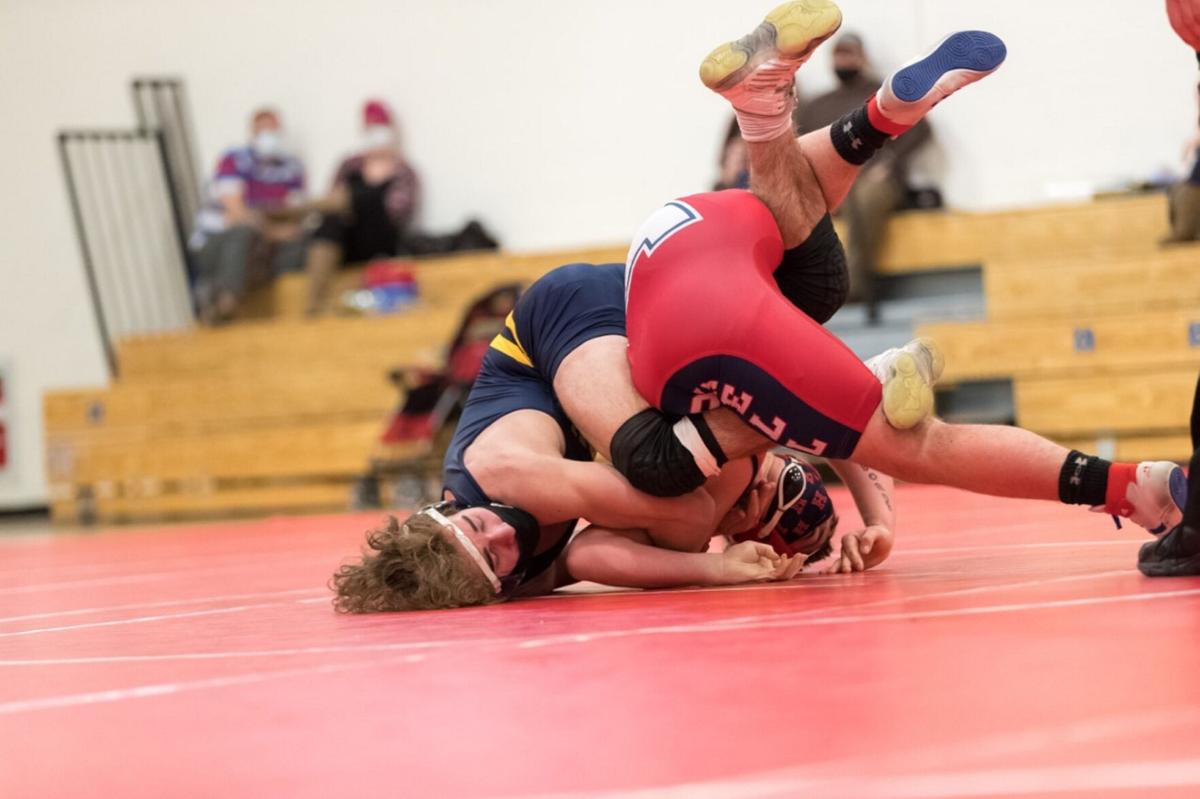 Photo by Steve Harrison Perry’s Ivan West picked up the victory Tuesday over his Hornell opponent.

Photo by Steve Harrison Perry’s Noah Leitten gets in on a double during his victory Tuesday night.

Photo by Steve Harrison Perry’s Ivan West picked up the victory Tuesday over his Hornell opponent.

Warsaw’s lone on the mat victory came in thrilling fashion at 138 pounds when Santosh Mongar rallied for the 12-11 victory over Chris Thompson.

“The kids were happy to get out on the mat tonight and wrestle,” A/G coach Andy Englert said. “It has been a long time coming and they were really excited.”

Le Roy and Cal-Mum both won three head to head matches but Cal-Mum picked up four forfeits in their LCAA victory Tuesday.

Le Roy had two pinfalls and a major decision.

Ivan West and Winston Sarhle won by pins for Perry during their loss to the Red Raiders Tuesday.

Perry’s Noah Leitten then had a come from behind win at 110 pounds beating his Hornell opponent by a 9-8 score.

Perry’s Zach McCowen won by pin in his exhibition march.

“The boys did a good job considering the time frame of preparation and circumstances,”Perry coach Phillip Leitten said.

Raniewicz, this week’s Dansville Chrysler Dodge Jeep LCN Athlete of the Week, finished with 18 points to go with seven rebounds and five assists.

Wade had his usual big game with 17 points along with seven rebounds, seven assists and six steals.

Keshequa (0-2) was led by Wyatt Burnett with 13 points while Riley Reese and Tyler Mallaber added nine and eight points respectively.

“Cal-Mum played outstanding,” Keshequa coach Jordan Minnis said. “They are so fast and can score with such ease that they are a really difficult match up for anyone they play. Playing teams like Cal-Mum will only make us better. With such a short season, we have no other choice but to move forward because we play against a really good York team on Thursday.”

The victory was -295 for his career for Cal-Mum coach Dan Dickens.

“I thought the first and third period we played with a high level of intensity,” Cal-Mum coach Dan Dickens said. “We got out and got some easy buckets in transition. Just trying to get better every day.”

Host York jumped out to a 37-18 first period lead thanks to 14 first period points from senior James Kennedy as the Golden Knights (1-1) cruised to the easy win over Mt. Morris Tuesday.

Kennedy finished with 16 points all in the first half.

Sophomore Maddox Timothy was red-hit from the outside as he scored 15 points including three 3-pointers.

York hit 15 three-pointers in the game.

“I’m really pleased with the team effort tonight,” York head coach Eddie Orman Jr. said. “We were able to maintain intensity throughout the game and really shot the ball well. It was fun to see some of our younger guys settle in during and play a little more relaxed. Just like we didn’t have much time to feel bad after our loss to Cal-Mum, we don’t have much time to celebrate tonight. We need to refocus and get ready for our first road game Thursday at Keshequa.”

“It was a great defensive effort by our team tonight,” Perry coach Anthony Macaluso said.

Visiting Geneseo improved to 2-0 on the season with the victory over Pavilion Tuesday night.

“Geneseo was a problem on the glass all game and really overwhelmed us with their size,” Pavilion coach Jack Jeffres said. “Adam Wright does what he does best and put the ball in the basket. Eghosa Okpefe was a force inside and played a strong game as well.”

For Pavilion (1-1), Dylan Dziekan was all over the place defensively and led Pavilion with 15 points while Trevor Wiedrich added 12 points and five rebounds. Pavilion hosts Mount Morris Thursday.

Visiting Avon was led by Zach Colvin’s 23 points including 14 in the first period when the Braves opened up a big lead.

Roman Volpe and Dylan Smith also scored in double figures for the Braves (2-0) with 11 and 10 points respectively.

“Avon was well prepared and played great tonight,” Letchworth coach Tyler King said. “They certainly looked like the defending sectional champions and clicked on all cylinders. We had very little answers for their offensive attack.”

Trailing by eight points at the half, visiting Livonia outscored Le Roy 17-3 in the third period to take control en route to the D-I victory Tuesday to improve to 3-0 on the season.

Livonia outscored LeRoy 35-17 in the second half.

Alex Minnehan had a game-high 25 points and Steffan Gwyn finished with 20 for the Bulldogs.

“LeRoy was getting very good looks on our man defense and scoring pretty much when they wanted too,” Livonia coach Matt Young said. “We switched defense at the half to try to slow them down and get our transition offense going. And we got both! We played much better in the second half and hit our foul shots. We were 1/6 in first half and hit 14/17 in the second half — it was a tail of two different halves for us. Proud of the way the guys responded in the second half.”