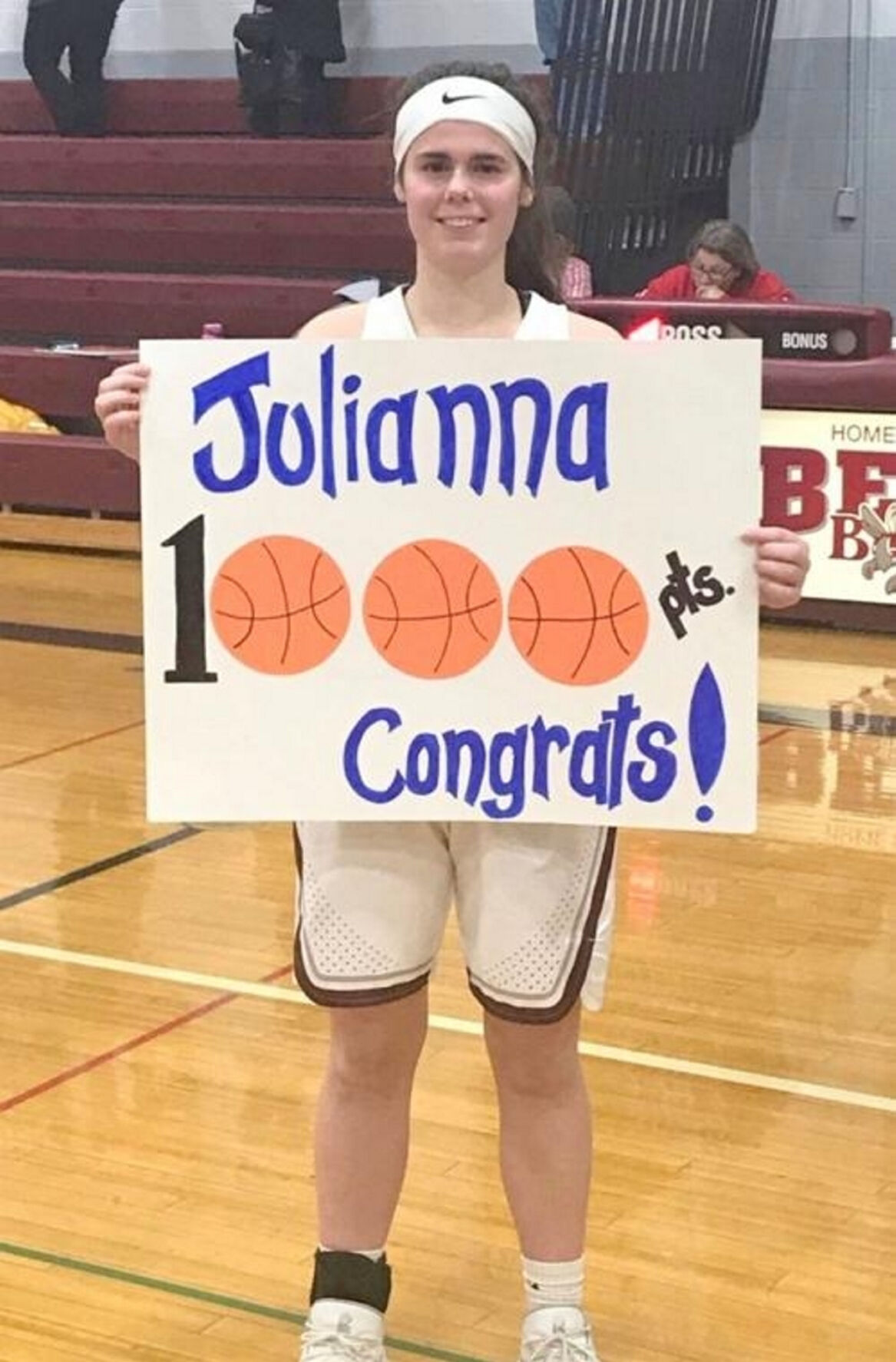 File photoJulianna Amesbury holding a sign after reaching 1,000 points for her career on Senior Night. 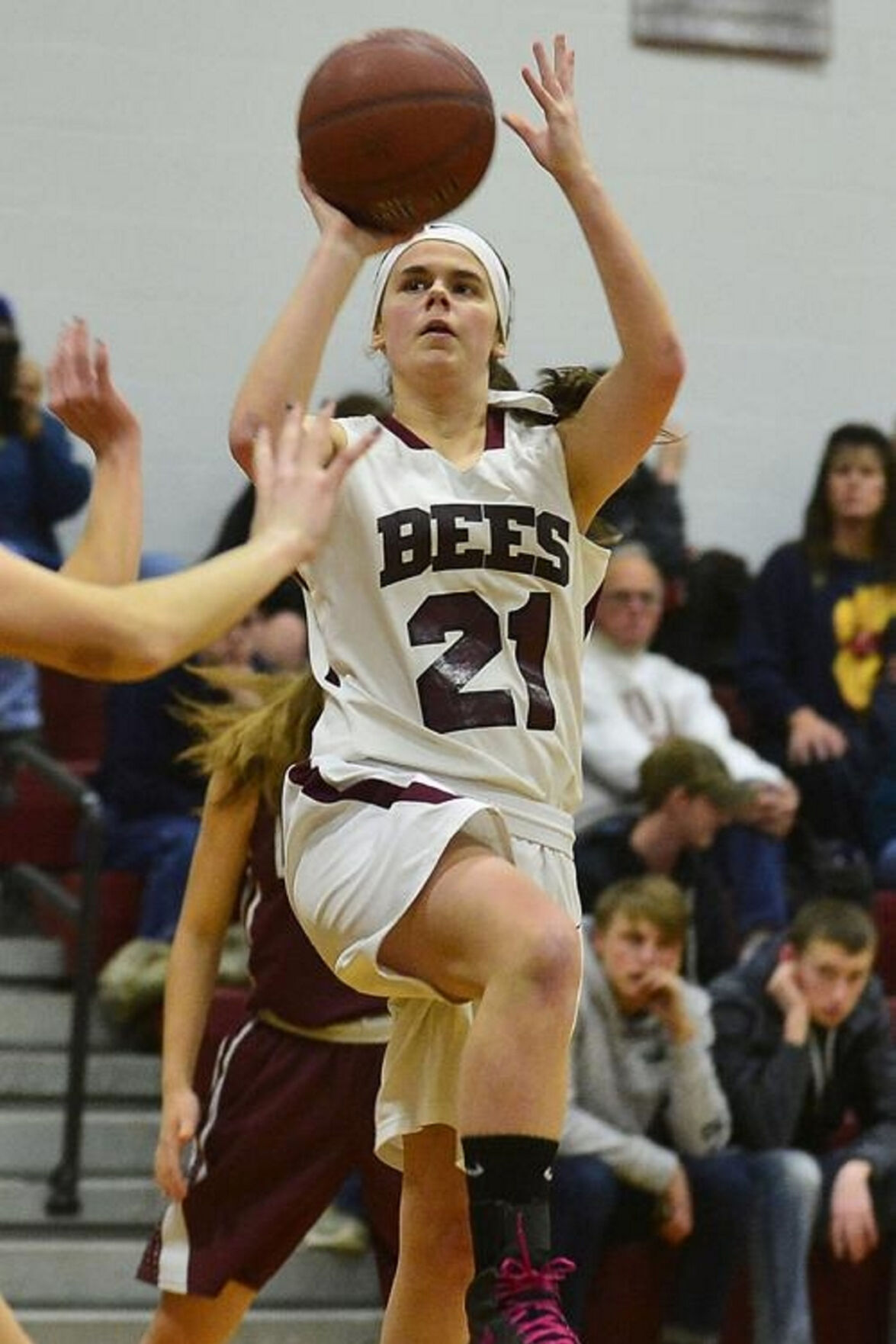 File photoJulianna Amesbury was one of only four players in Byron-Bergen history to reach 1,000 points for her career. 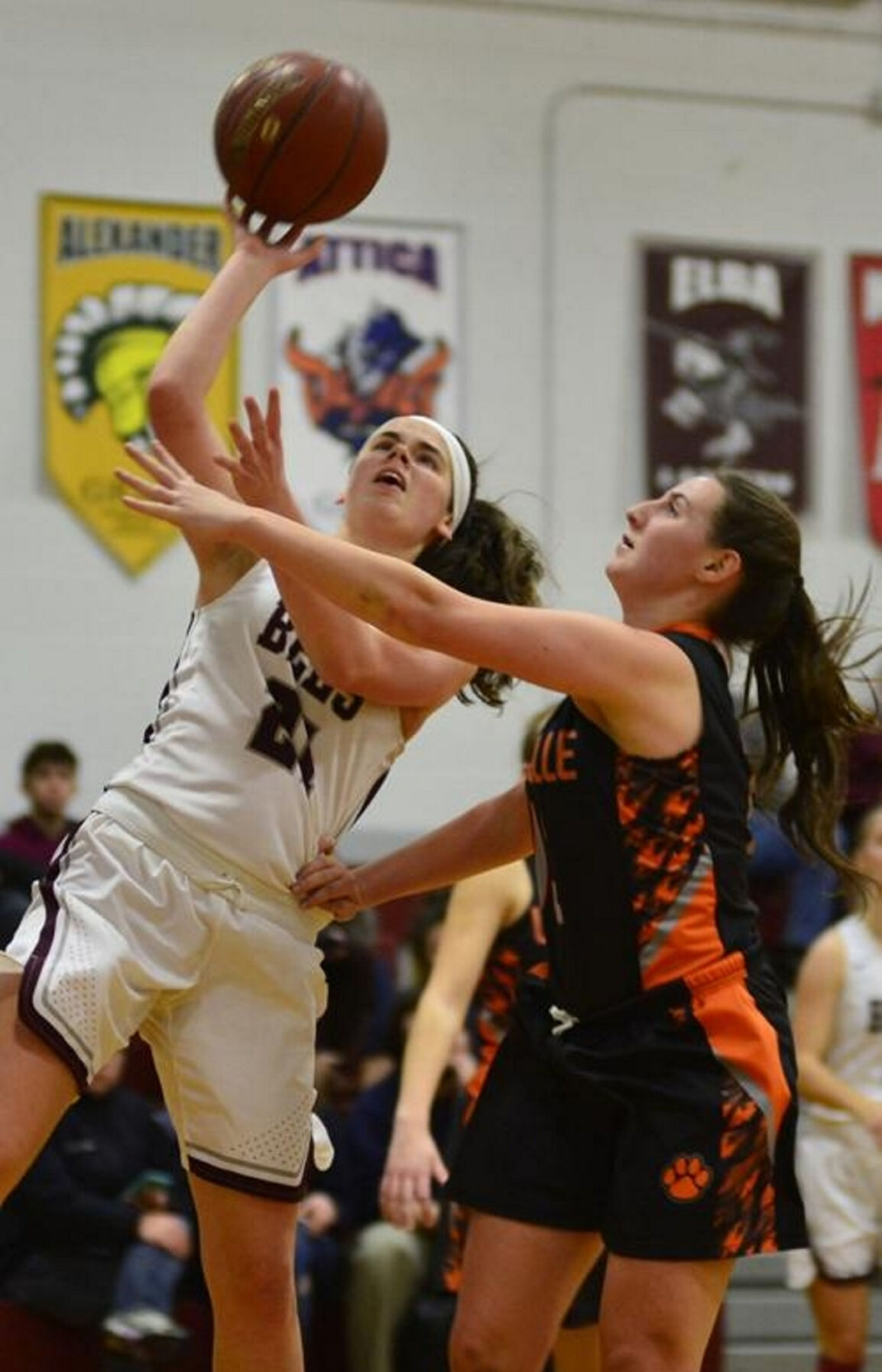 File photo Julianna Amesbury scored all but three of her 1,000 points in just three seasons with the Bees. 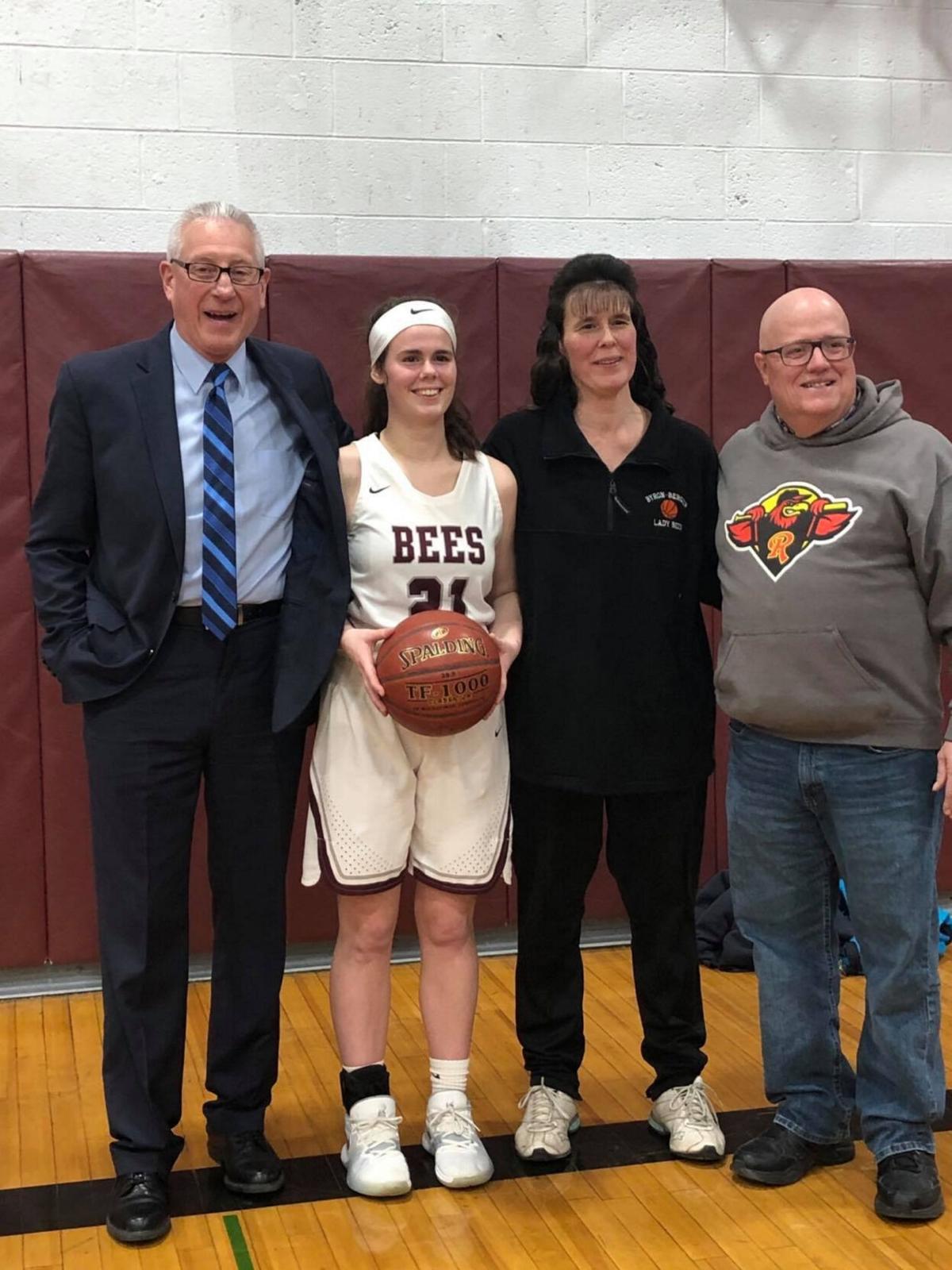 Photo providedJulianna Amesbury with her mother, Tammy, after scoring her 1,000th career point on Senior Night. 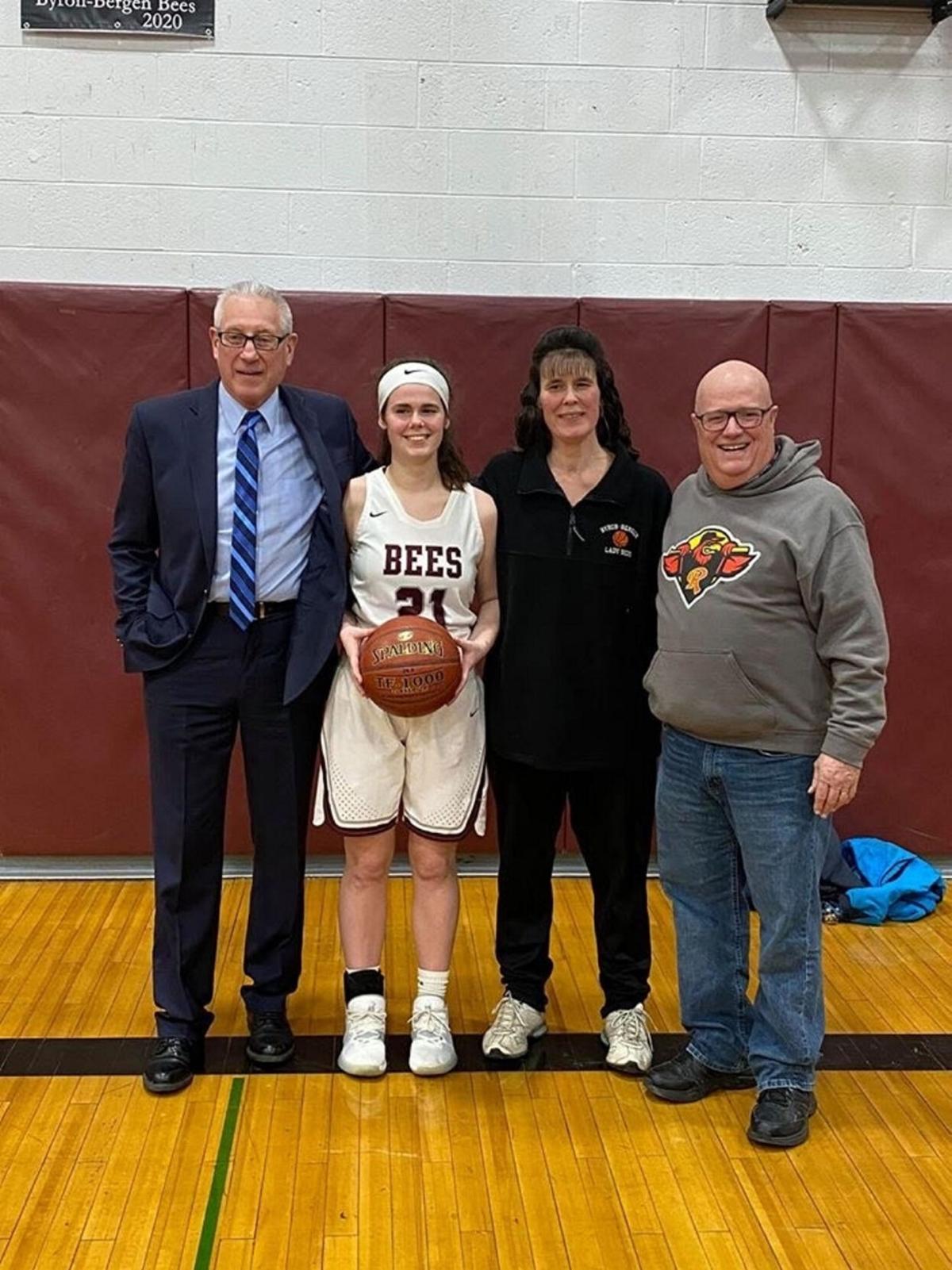 File photoJulianna Amesbury holding a sign after reaching 1,000 points for her career on Senior Night.

File photoJulianna Amesbury was one of only four players in Byron-Bergen history to reach 1,000 points for her career.

File photo Julianna Amesbury scored all but three of her 1,000 points in just three seasons with the Bees.

Photo providedJulianna Amesbury with her mother, Tammy, after scoring her 1,000th career point on Senior Night.

BERGEN — With a pair of free throws in a mid-February loss to Pembroke, Byron-Bergen’s Julianna Amesbury made program history. With those two seemingly meaningless points — her 13th and 14th of the night — Amesbury became just the fourth player in Bees history to eclipse the 1,000-point plateau for her career.

In reaching the century mark, Amesbury joined Tammy Gilbert, Alyssa D’Errico and Abbie Kelley as the only Byron-Bergen players to reach that mark for their careers.

However, there was a little more history that was made that night than might have initially met the eye.

Gilbert — the first player in Byron-Bergen history, girls or boys, to reach 1,000 points — would eventually get married later in life and assumed the last name of Amesbury. Years later, among numerous other athletically skilled children, would come a daughter, Julianna, and when that daughter sank those two foul shots, the Amesbury’s became what is known to be the only mother/daughter duo in Section V history to each reach the 1,000-point milestone.

“My mom was my role model growing up,” Julianna said. “I looked up to her in every way. She has been my biggest supporter since I began playing sports and would always give me advice on how to get better after games. It was very special to be able to accomplish this with my mother. I have always looked up to her and to be able to achieve this with her is something I will never forget.”

For the record, mom would hold on to the points record in the household as Tammy would finish her high school career with 1,091 points, while Julianna would finish just 16 points behind at 1,075.

What makes this feat even more impressive for the Amesbury’s is that they each accomplished the 1,000-point plateau by playing in just three varsity seasons. Further, Tammy Amesbury was able to reach the milestone in the 1980s when the girls were still playing with a boys basketball, there was no 3-point line and the regular season was just 14 games, compared to the 20 that are played now.

“Tammy played both ends of the court,” longtime girls basketball coach Bill Wade — Byron-Bergen coach in the 1980s and Tammy’s head coach — said. “She averaged over 20 points a game and also guarded the other team’s best scorer. Tammy was one of the greatest clutch players I had the pleasure to coach. She was a very quiet player that let her play on the court do her talking.”

Current B-B head coach Rick Krzewinski has certainly had a close-up view as to the talent on the floor that the Amesbury’s have produced over the years. Julianna is the seventh of the bunch that he has coached over the years, while he is hoping to hang around a few more years for the eighth, Janessa, who will be entering eighth-grade this year.

And for Krzewinski, watching Julianna reach the same mark as her mother was something that came well-deserved.

“I can tell you this, all seven of the girls were a pleasure to coach. They came and worked in practice and I knew I would always get that effort in a game,” Krzewinski said. “I’m giving Tammy the credit for that. It wasn’t unusual for me to go up to one of the Amesbury girls the practice after a game and ask them, so what did mom think? I know she was a whole lot tougher on them then I was. But I’m sure that’s what made Tammy the great competitor that she was and I’m sure Bill Wade would agree with me.”

A three-year starter along with Kelsey Fuller and Miriam Tardy, Julianna Amesbury helped turn around a couple of average Bees seasons into an 18-5 record this past winter, including a trip to the Class C1 semifinals.

In each of those seasons, Amesbury upped her game from 10 points per night, to 15 last season as a junior to an incredible season in 2019-20 when she averaged 22.4 points, six rebounds, 3.6 steals and two assists per game.

But for the long-time Bees coach, it all came back to a sectional game during Julianna’s freshman season. Krzewinski had called her up for the sectional tournament and Julianna scored three points against North Rose-Wolcott. He didn’t recall the conversation after the game, but Tammy did.

“When I was talking to Tammy after Julianna had scored her 1,000th point on senior night Tammy asked me if I remembered what I told Julianna after the NR-W game her freshman year,” Krzewinski said. “I didn’t remember but Tammy said I looked at Julie and said only 997 to go. I think I was kidding around. Who knew?”

For the mother watching the daughter get so close to the milestone, it was definitely one of those things that was a lot more satisfying once it was over, as opposed to the journey toward the end as Julianna was getting close.

Whether the duo liked it or not, the pressure was starting to mount, for better or for worse.

“I was so relieved when she hit the 1,000 point mark. For a couple weeks prior to her reaching the milestone, there was so much unintentional pressure being put on her by fellow classmates, siblings, and school personnel reminding her, and asking her, how close to the 1,000 points she was,” Tammy Amesbury said. “She had a hard time sleeping, eating, and focusing on anything else but this. And, this extra pressure did affect how she played in a couple of games prior to reaching this milestone.”

It probably didn’t help that Byron-Bergen was chasing what has proved to be an elusive sectional title. In fact, the last Bees sectional title came in 1984, with the team coached by Wade and led by Tammy Gilbert. A team that Wade thinks would rival any of the teams that he ever coached as the best.

Yet like mother, like daughter, Julianna would come through in the clutch to reach 1,000, even though B-B would eventually fall just short of the block, getting upset by Letchworth in the semifinals.

“Once she hit the 1,000 points, though, all of the pressure was gone and life returned back to normal for us,” she added. “Knowing that we are the only mother/daughter duo to achieve this accomplishment makes it even more unbelievable and special, and reinforces that it is quite a remarkable feat.”

The other thing that the Amesbury’s had in common on the floor at B-B was that they never stood out as the star of the squad. Tammy Amesbury played on a team with three other stars, according to Wade, and all four went on to impressive college careers.

Meanwhile, Julianna had to share the spotlight with Tardy and Fuller, though she never seemed to really care.

“The three of them were so good at it and were always looking for each other,” Krzewinski said. “Even though she played well her sophomore and junior year I don’t think she really came into the spotlight until this year. But averaging close to 23 points a game will get you noticed.”

For Julianna and Tammy, believe it or not there has never been a game of one-on-one, mom vs. daughter.

“Julianna and I never even one time played a one on one game,” Tammy said. “After every game, I’d talk to her about different aspects of the game — her strengths, weaknesses, what I thought she could do differently next game, or what she should continue doing in future games. She always listened to what I had to say, whether she liked what I said or not. If we were to ever have played one on one, I have her by height, she has me by age, so who knows who would have won.”

Along with being a star on the court, Julianna was also pretty good on the soccer field as well.

After a junior year in which she scored three goals and added three assists, she upped that to 15 goals and six assists in her senior season with the Bees.

However, it always came back to the hardwood.

“Some of my greatest memories are playing on the court with two of my sisters at the same time, making memories with my best friends, and scoring 1,000 points,” Julianna said. “I never thought I would score 1,000 points. As the season went on, it became more real of how close I was getting. When I finally got to it, I was in shock. It was one of the best moments of my high school career and I was glad I could do it on senior night with my whole family watching.”

Wade echoed the fact that what the Amesbury’s were able to accomplish isn’t something that will likely be done again any time soon.

“Tammy was exceptional in all ways,” Wade said. “I was at the game when her daughter scored her 1,000 points. I was very proud at that moment to say I was Tammy’s coach. I don’t know of any other mother/daughter that have accomplished this rare feat.”

While Tammy will be spending a few more years in the Byron-Bergen gym, watching her youngest daughter, Julianna will be heading to GCC in the fall and hopefully be playing basketball for the Cougars come winter.

“I was so proud to watch her be so successful at something she so dearly loves to do,” Tammy said. “It’s a great feeling knowing Julianna achieved this accomplishment at Byron-Bergen like I did. Now, both of our names will forever be in Byron-Bergen’s girls basketball history.”