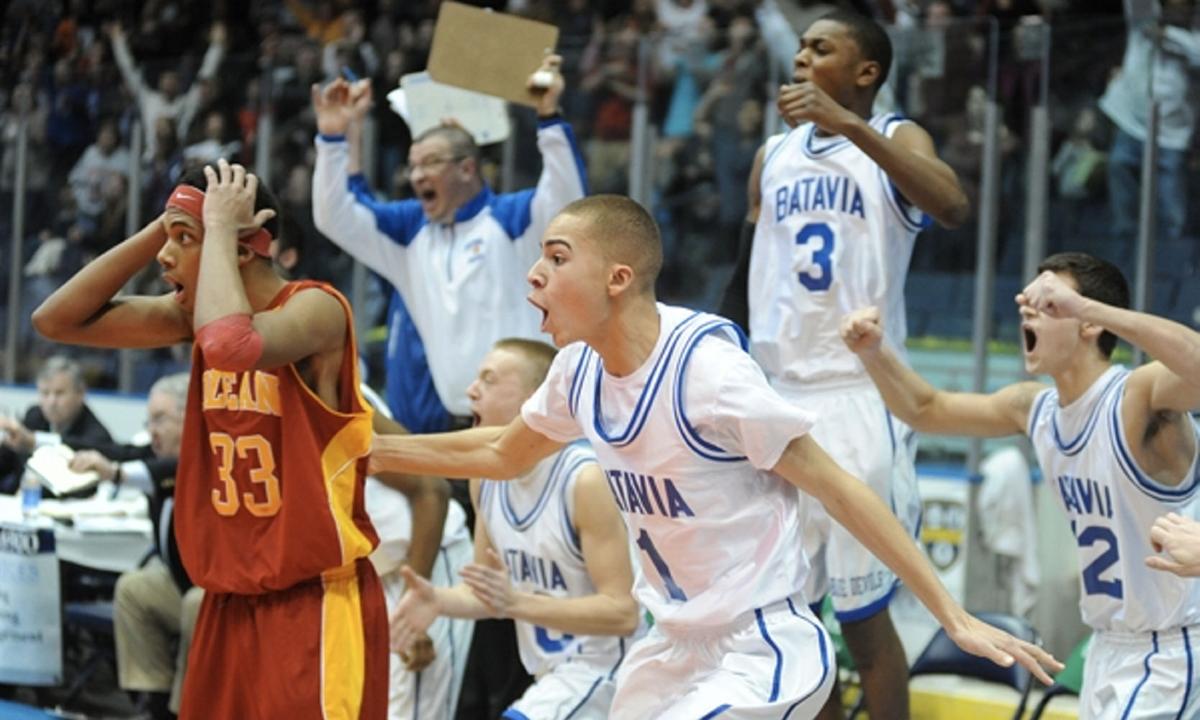 Mark Gutman/Batavia Daily News The Batavia bench reacts to a buzzer beating game-winner from then sophomore Jeff Redband in the '13 Far West Regional. 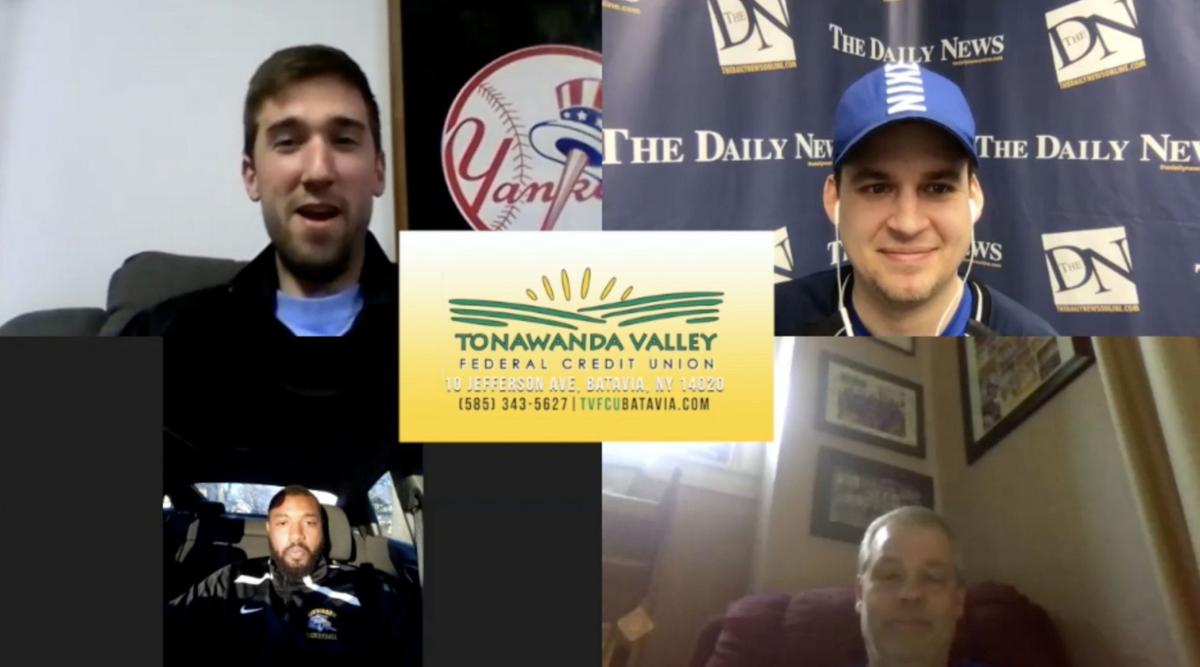 Zoom Batavia Daily News reporter Alex Brasky spoke with members of the 2013 Batavia boys basketball team which advanced to the state final four on a buzzer beating win over Olean in the Far West Regional. 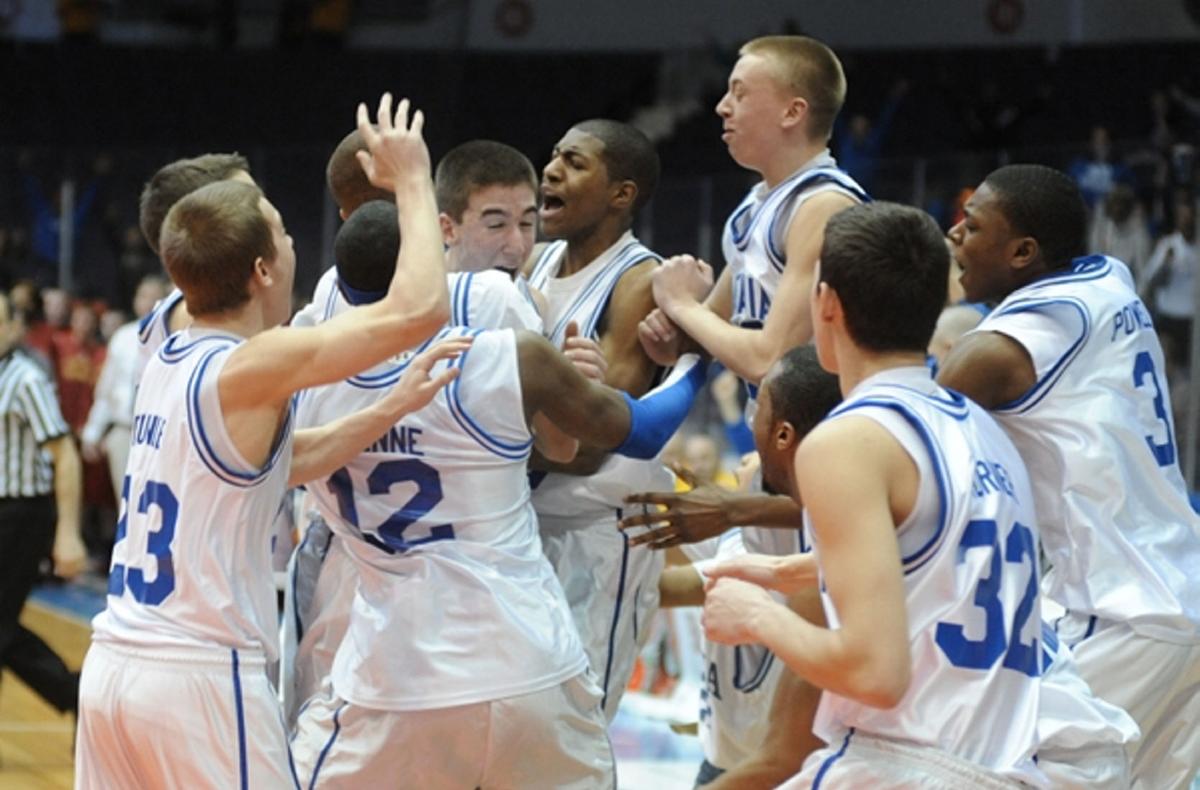 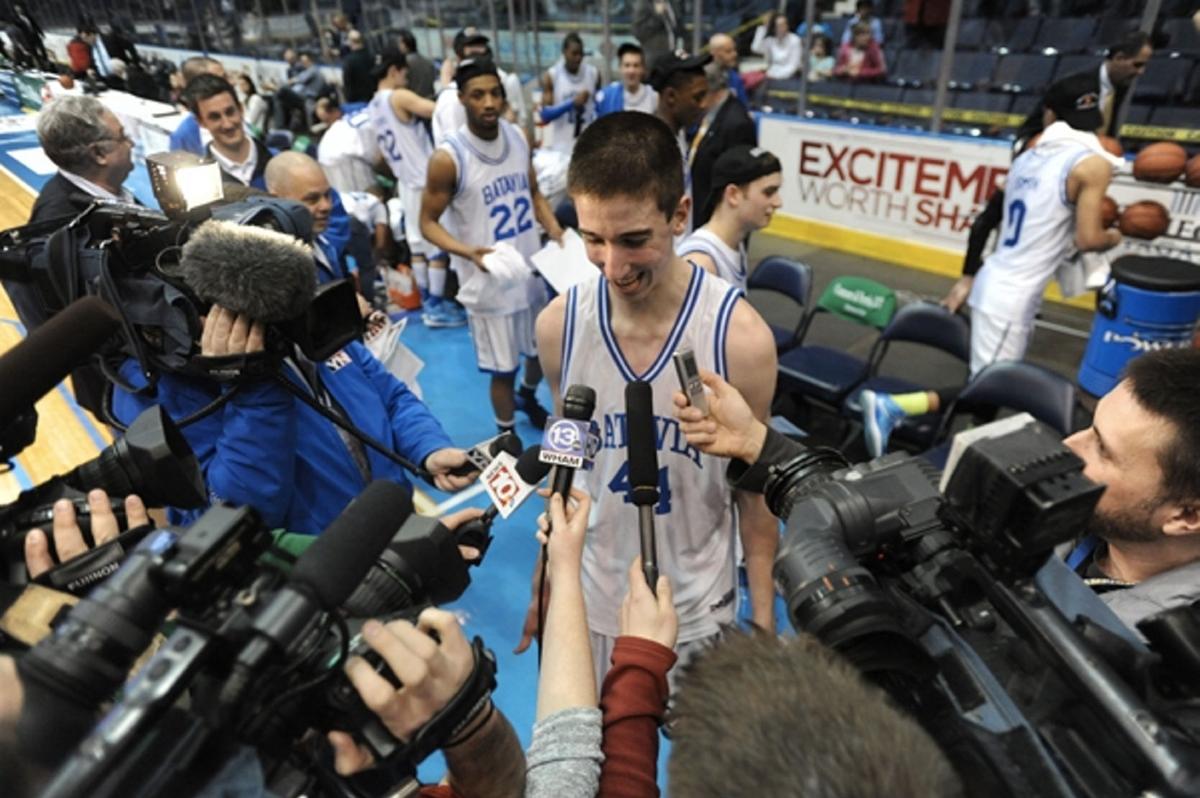 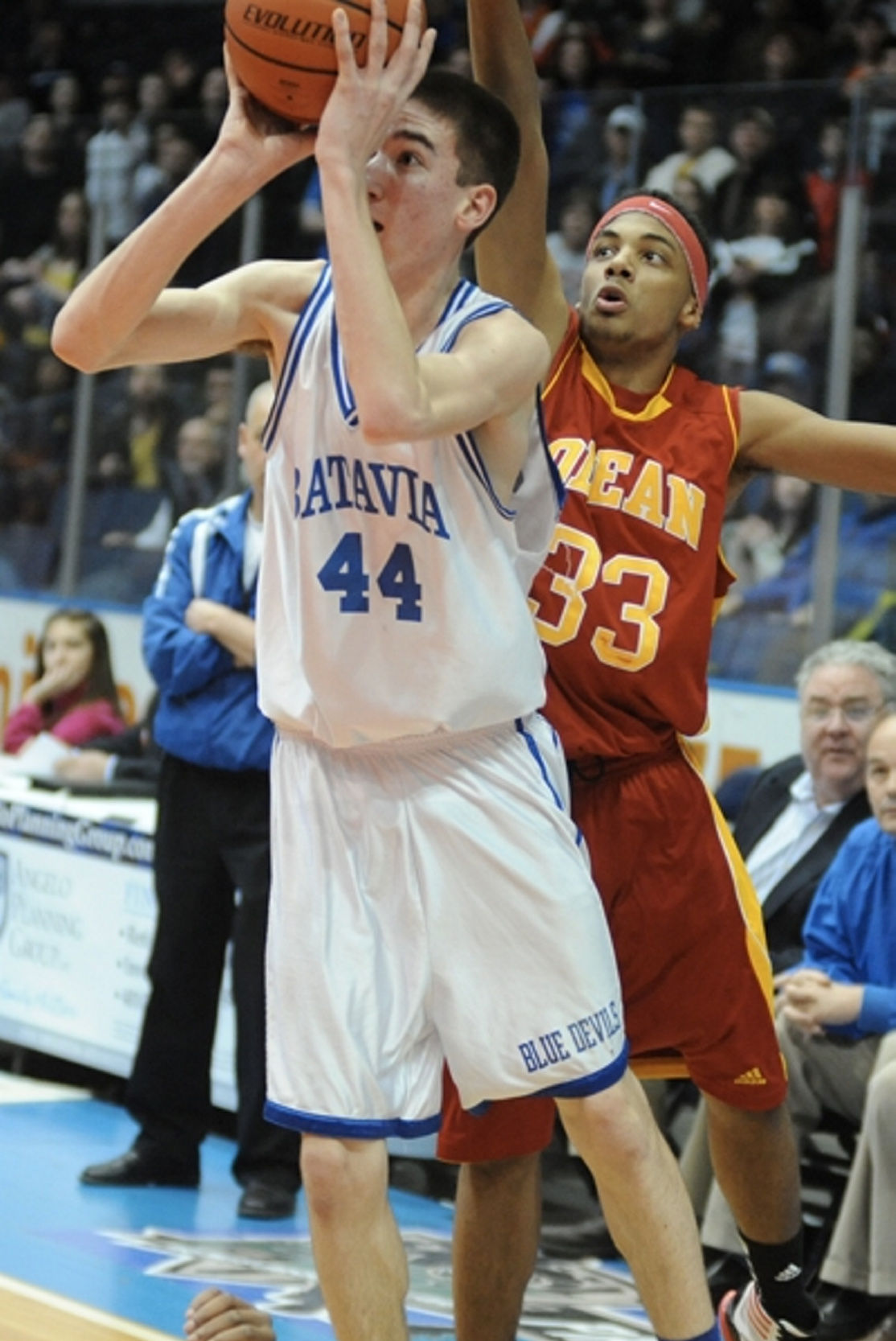 Mark Gutman/Batavia Daily NewsThen Batavia sophomore Jeff Redband squares up what turned out to be a game-winning, buzzer beating three-pointer that sent the Devils past Olean and into the state final four.

Mark Gutman/Batavia Daily News The Batavia bench reacts to a buzzer beating game-winner from then sophomore Jeff Redband in the '13 Far West Regional.

Zoom Batavia Daily News reporter Alex Brasky spoke with members of the 2013 Batavia boys basketball team which advanced to the state final four on a buzzer beating win over Olean in the Far West Regional.

Mark Gutman/Batavia Daily NewsThen Batavia sophomore Jeff Redband squares up what turned out to be a game-winning, buzzer beating three-pointer that sent the Devils past Olean and into the state final four.

Great sports memories are often produced as a result of a few common occurrences. A last second shot, a game-winning score, an unlikely act of heroism, etc. For the 2013 Batavia boys basketball team, they experienced all of the above, and then some, in one of the most-exciting moments in Section V sports history.

Many in Batavia simply remember ‘Jeff’s shot’, but those closer to the situation remember the entire story behind the Blue Devils’ buzzer-beating victory over Olean in the ‘13 Far West Regional.

THE BACKSTORY Like many great memories, this one has more to it than meets the eye.

From the moment the ‘13 season began Batavia and Olean were on a collision course toward the Class B Far West Regional, so much so that Devils’ head coach Buddy Brasky made an interesting decision early in the year. A regular participant in the Huskies tip-off tournament at that point in time, Batavia decided to pull out of the tournament before the season, as their eyes were set on a future matchup with Olean in the postseason.

“I thought we had real good chance to see them in the regional so I declined the invite to their tournament,” recalled Brasky. “I didn’t want them to get a chance to play against our defense, just in case we played them later in the year.”

Turns out that’s exactly what wound up happening.

The Huskies entered the 2013 Far West Regional as the No. 1 team in the state and the Blue Devils came in as the underdog that was looking to knock off what is one of the most-storied programs in NYS.

After a nip and tuck first half, the 2013 ‘B’ regional went to the halftime break with Batavia out in front by four. However, coming out red-hot from three-point land in the third quarter, the Huskies returned fire and used a 21-5 run to seize a commanding 12-point lead midway through the third. Batavia kept fighting and cut their deficit to seven going into the final eight minutes.

To begin the fourth the Blue Devils’ Jamesson Etienne came through with six of his team’s next eight points in order to get Batavia back within one with just over a minute to go.

With under 60 seconds remaining, and the game tied the Blue Devils made a huge mistake on a turnover which turned into an easy bucket for Olean on the other end.

With the Huskies now in the lead by two, Batavia called for a timeout with under :30 remaining to prepare for one final chance at sending the game to overtime.

Following the turnover and layup on the other end which gave Olean the lead, the Blue Devils came out of the timeout and nearly turned it over once again.

“We set up a play and they shot the gap again and it looked like we were going to turn it over again,” recalled Coach Brasky. “They tipped it and it rolled into the backcourt and Justin (Washington) sprints and dives after the ball and an Olean player dives with him - but only Justin managed to get a hand on it before it started rolling toward (the boundary).”

Then, out of nowhere came a tall, thin figure streaking, seemingly out of nowhere toward Washington, the Olean player and the ball, traveling almost the length of the floor to save the ball from going out of bounds. The clutch play led to Batavia calling another timeout with six and a half seconds remaining which allowed them to set up one last effort to tie the game.

That clutch play was made by the unlikeliest of heroes, who had even more heroics to deliver in the game’s waning seconds.

In most cases, when a great sports moment is made you usually think of it being created by a familiar face, a player who has been there, done that. With that being said, in this case the hero was instead a fresh face that had yet to leave his mark.

With six and a half seconds remaining, although Batavia’s plan was to put the ball in the hands of what had been one of its most-reliable offensive players all season, what turned out to be was far different. Instead the game came down to a player who had spent the majority of the season as a jayvee.

Stilted sophomore Jeff Redband, standing 6’7” tall and weighing no more than a 175 pounds soaking wet had spent near the entirety of the regular season with the JVs before moving on to varsity for the postseason. A talented player who was more than capable of contributing on the varsity squad, Redband benefitted greatly from his time spent learning to be a go-to-guy at a lower level. Redband says when he made the jump to varsity, things were much easier for him due to the time spent under longtime Batavia JV coach Jim Fazio.

“On JV, I was the best player (and was) always guarded (closely),” said Redband. “When I came up to varsity I was pretty wide open. A three is a three and I just kind of viewed it that way. When I got a chance to play with varsity we had a lot of great players and it was pretty easy for me when I was wide open.”

In some cases it may be tough to welcome a young player into the fold in the season’s most-important moments, but not for the ‘13 Blue Devils.

“They always told me if you’re open, shoot it,” said Redband. “Coach always told me ‘If you’re not going to shoot it, then why do I have you in the game?’. The confidence they had in me let me now that even if I missed they were going to be okay with it and they trusted me. As a sophomore looking up to these guys that was really big for me.”

Although welcomed by his teammates and coaches, Redbands’ call-up was something out of the ordinary for the Blue Devils.

“He was the first JV player that I called up to sectionals and gave a prominent role to,” said Coach Brasky. “I had not ever done that before, but it was in the plans at the beginning of the year.”

With some teams it may have been difficult to make that decision, said Coach Brasky, but not with the ‘13 team.

“I knew the guys would accept (Jeff) because they wanted to win,” said Brasky. “One thing about that team, they really thought they were good and really wanted to win and advance to state final four (at all costs).”

That type of team-first mentality set the stage for what Coach Brasky recalls as the most unforgettable moment throughout his long coaching career.

With six and a half seconds remaining and trailing by two, Batavia came out of the timeout and the plan was simple, get the ball to Washington and let him go the length of the floor to the rim for the game-tying layup. Washington, a six-foot, four-inch load with good feet, was without a doubt the best candidate to get a quick, easy bucket for the Blue Devils and had done so time and again throughout the season.

However, like many late game situations, things didn’t go according to plan and the Blue Devils were forced to adjust.

“I was supposed to get the ball and go straight to the rim, but when I got the ball over half court the guy cut me off,” recalled Washington. “So I (fell to the) ground and I look up, I’m upside down on the ground and don’t see anything (at first), but next thing I know I see Jeff snag the ball.”

Standing behind the three-point line on the wing in front of the Blue Devils’ bench, Redband grabbed the loose ball with Washington lying at his feet, dipped down to evade an oncoming Olean defender, rose up over his teammate, fired the ball toward the basket and waited.

The shot went in.

“Once it went in it was crazy, the whole place just exploded,” recalled Redband. “It was super loud, I got engulfed by the whole team right away. We fell over the other team’s point guard, it was just crazy and it was just a hectic moment.”

After the shot went in the moments which followed left a young Redband in awe.

“I remember, first of all after the game I got surrounded by all of these cameras and as the young JV kid, I didn’t know what to say to them,” he said. “On the bus my phone died because of all of the texts. And I remember people saying it was going to be on ESPN and I was like ‘No way’.”

“The next day I had teachers playing the video in class and I went into lunch the next day and a whole bunch of my teammates were in there and they started clapping when I walked in,” recalled Redband. “I was just this super embarrassed high school kid, but it was a fantastic experience for me.”

Like all great memories, this one still resonates years later. When it occurred, Redband’s shot was all over the place, including SportsCenter’s Top-10 Plays, where it came in as the number eight play for that week. It was one of the most-memorable moments in Section V sports history, and probably the most-memorable for those who experienced it first hand.

“It’s something that I’ll never forget,” said Coach Brasky. “We’ve had a number of buzzer beaters that have won big games (over the years), but never that big of a game. That’s got to be the all-time big shot in the history of (the program).”

Brasky went on to say, for him, he’s not sure Redband’s shot can ever be topped.

“I don’t know how it could get much better than that,” he added. “To win the game to go to the state final four at the buzzer.” What makes it even more special for Brasky is the journey that he and his team took to get there.

“We had an up and down year that year. We had some turmoil, we went through some adversity,” said the Blue Devils’ longtime head coach. “It made it all the more rewarding that they all came together as a group at the end of year, and over course of year they all bought in one, by one to the fact that it takes a team to win championship.”