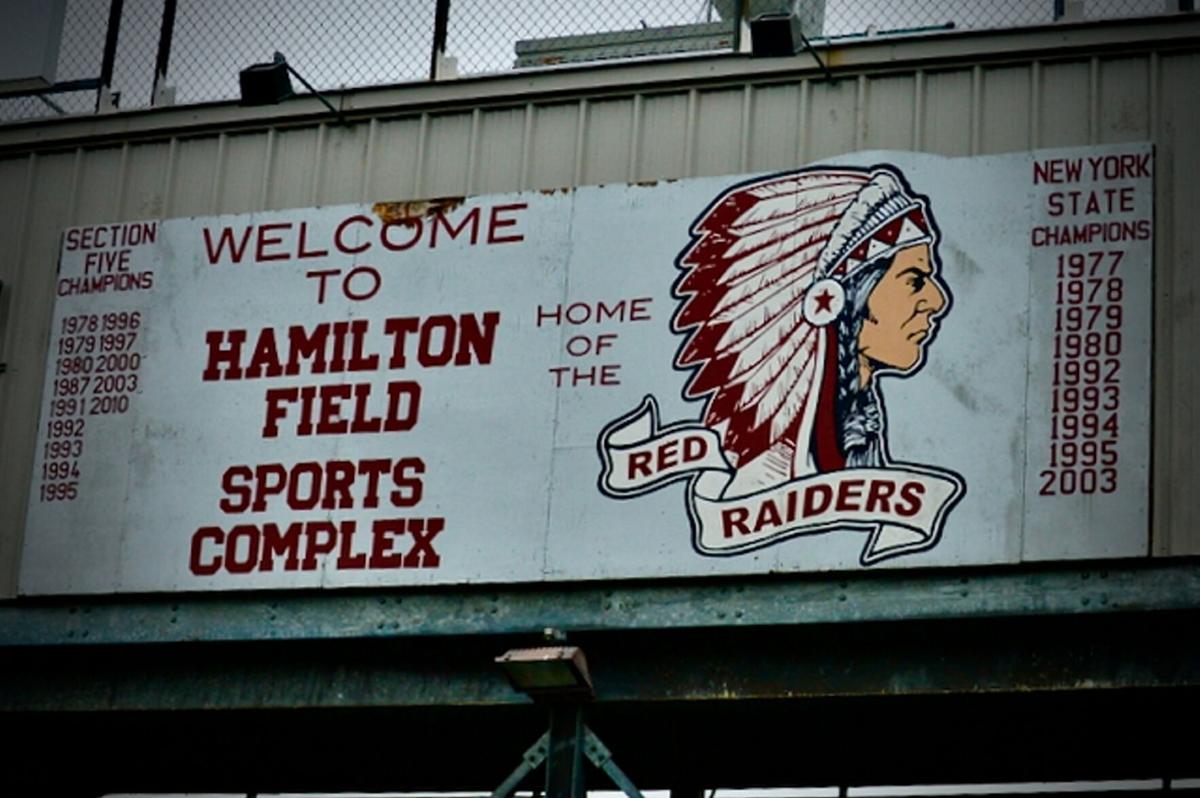 Alex Brasky/Batavia Daily News The Cal-Mum school district is set to change its moniker from the ‘Red Raiders’ to ‘Raiders’, while ceasing its use of a Native American mascot. 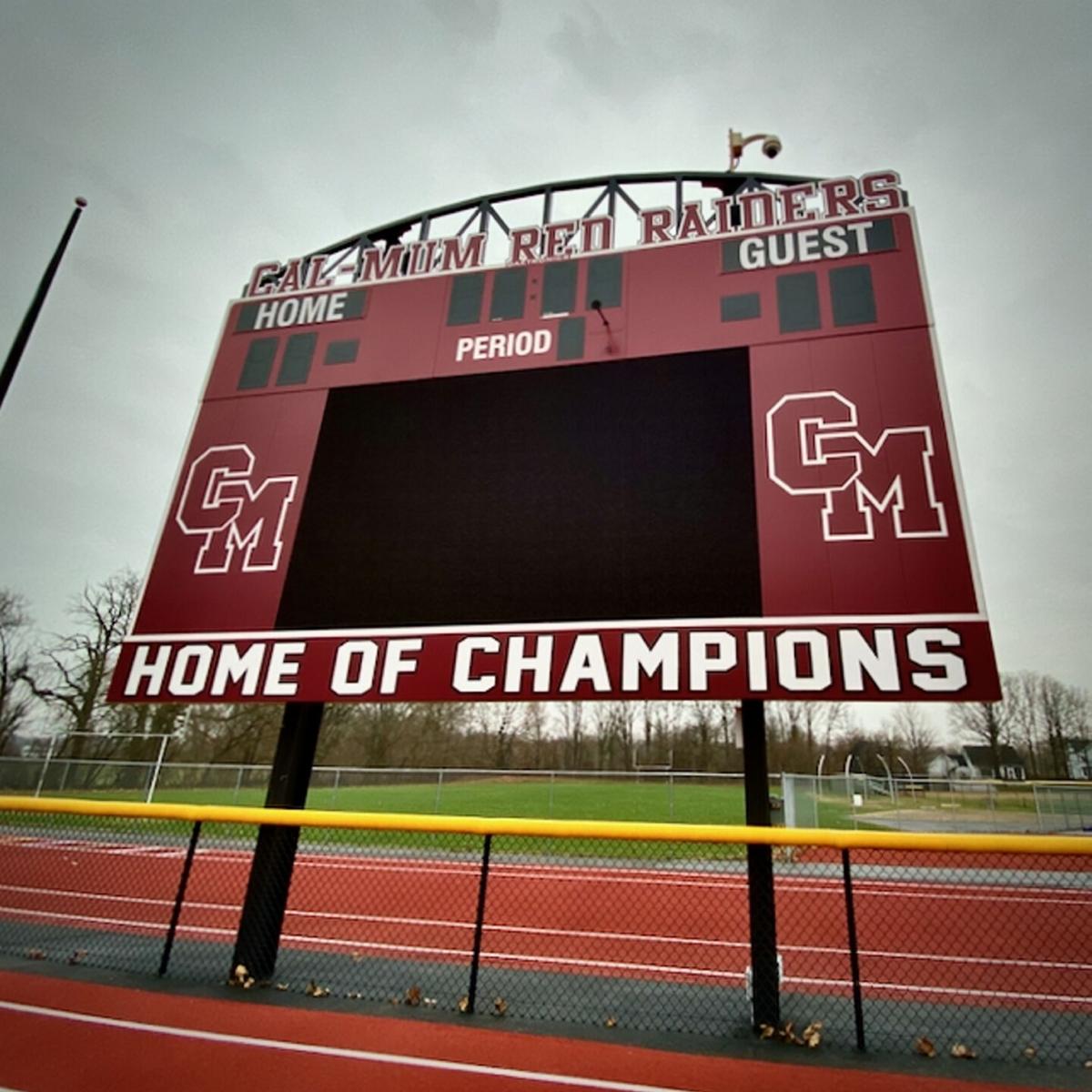 Alex Brasky/Batavia Daily News In a letter sent to the C-M school community, the district wrote that all ‘Red Raiders’ signage will be removed as soon as feasibly possible.

Alex Brasky/Batavia Daily News The Cal-Mum school district is set to change its moniker from the ‘Red Raiders’ to ‘Raiders’, while ceasing its use of a Native American mascot.

Alex Brasky/Batavia Daily News In a letter sent to the C-M school community, the district wrote that all ‘Red Raiders’ signage will be removed as soon as feasibly possible.

CALEDONIA — The Cal-Mum High School community received word on Wednesday morning that the district will transition from the moniker ‘Red Raiders’ and move forward as the ‘Raiders.’ Cal-Mum will also retire the school’s mascot, which depicts a Native American.

“The school’s mascot and name were not in-line with our goals to maintain a climate that acknowledges and celebrates diversity and inclusiveness while recognizing the dignity and self-worth of each person,” read a letter sent to the Cal-Mum community.

The Cal-Mum Board of Education decided to drop the ‘Red’ from ‘Red Raiders’ primarily due to years of requests from alumni, community members, and parents of athletes who called for the district to review its use of the Native American mascot. Along with numerous requests, the current social climate also influenced the decision, as was the case with the NFL’s Washington Redskins, which ended its use of a Native American moniker this season. Washington’s franchise is now known as the Washington Football Team.

The Cal-Mum Board of Education decided the time was now for the district to take an in-depth look at making a change.

“In light of everything that has transpired this year, with the Redskins and so forth, the board wanted us to take a deeper look at that,” said Cal-Mum Superintendent Robert Molisani to the Daily News. “So I provided the board some more information throughout the summer as well as at board meetings, and after we received all of the information, they wanted me to develop a plan moving forward.”

That plan is to maintain the use of the current school colors - maroon and white - and as for the mascot, there are no plans at this point. The school’s new logo will be the interlocking CM, which previously served as a secondary logo.

“After gathering feedback from our school community, (we decided to) retire the Native American mascot as well as the ‘Red’ (in ‘Red Raiders’). The connotation, of course with the red actually meaning murder and so forth, blood, and Raiders being associated with that,” added Molisani. “We are still remaining the ‘Raiders’. The mascot is really what’s changing substantially - the ‘Red Raider’.”

Many reached out to the district to support the name change, but a few were not in favor. Those against the transition included Cal-Mum legend Mike Monacelli, who led the C-M football team to countless sectional and state championships during an illustrious career as the program’s head coach. Monacelli was surprised at the district’s decision.

“I thought (at Cal-Mum we were) proud of where we were and what we’ve been doing, especially with our tradition and history.” said Monacelli in a phone interview on Wednesday.

“(The people of) Caledonia and Native Americans (have a history going back) hundreds of years. I thought we always treated (their culture) with respect and used that respect (to develop) our own school heritage,” added Monacelli. “We evolved. I started (at Cal-Mum) in 1971, and we evolved from the caricature-like mascot - like the old Cleveland Indians mascot with the big nose and hatchet - to sometime in the late 70s and 80s to a very noble chief logo.”

Molisani said some of the changes the school made to the mascot over the years weren’t accurate. In recent years, Molisani has been in contact with members of the Native American community and has since learned the mascot that the school had been using was not relevant to the Western New York area.

“We were looking at ways, potentially if we were in favor of maintaining the (Native American) mascot, what that mascot would look like for our region,” said Molisani. “And if you look at our (current) mascot, it’s not the American Indian that once walked our lands (in Western New York). It’s actually a plains Indian with the (type of headdress it’s wearing). So it’s actually not even an accurate representation of the Native American (tribes) that occupied our region.”

While his disappointment with the name change is evident, Monacelli acknowledged that change is crucial for society to move forward, and for him, it may just take some getting used to, but he will adjust.

“I understand change is important, and it happens,” said the former C-M coach. “I guess it’s a bit of a disappointment as a guy that’s been involved (with the school for so long). I’m a native of Albion, and to come here and be (part of) another small district with another great deal of tradition, I got sucked into (Cal-Mum’s) tradition, and it became a part of me.”

In the end, Monacelli says he is prepared to move on.

“It’s a bit of disappointment, but I guess I’ll have to get over it,” he said.

Monacelli was one of those who reached out to the Cal-Mum BOE per their request for community feedback.

“I’ve had only a couple (who wanted to keep the name), in terms of written feedback,” said Molisani. “I’ve had conversations with people, because I live here in the community. But for the most part, I have asked for written feedback. It could be anonymous, or whatever the case may be, and all that info that was shared with the board.”

Molisani said that the district received close to 55 pieces of written feedback, and only a handful of people wanted to keep the name ‘Red Raiders’ and the Native American mascot.

“All others were in favor of making the change,” said Molisani.

In the end, Molisani doesn’t believe the change in mascot will be something that will be a difficult transition for the school community.

“Often times, as people from Cal-Mum, we refer to ourselves as ‘Raiders’ more so than the ‘Red Raiders’,” said the C-M superintendent. “It’s not necessarily the (mascot), it’s the people, it’s the tradition. The tradition of excellence and the pride we have in our school community that makes Cal-Mum a great place to learn, grow, and perform on the ball fields or on the stages.

“It’s really been the people, not the mascot or anything of that nature. We are certainly a prideful school community, and the ‘Raiders’ are alive and well. We just will not be using the Native American mascot any further. I think we will still continue to flourish and do great things on our fields and in our classrooms. I don’t think it will be a stumbling block for us at all.”

Moving forward, the school will begin to remove all ‘Red Raiders’ signage and imagery from correspondences, websites, social media, facilities, and grounds as soon as feasibly possible.

The self-proclaimed ‘Home of Champions’, Cal-Mum High School, carries a storied tradition of success within several of its sports programs. While that tradition is set to undergo a significant transition, Molisani says that a simple name change won’t stop this school district from providing its students and student-athletes with a great opportunity to succeed, as it has since 1898.