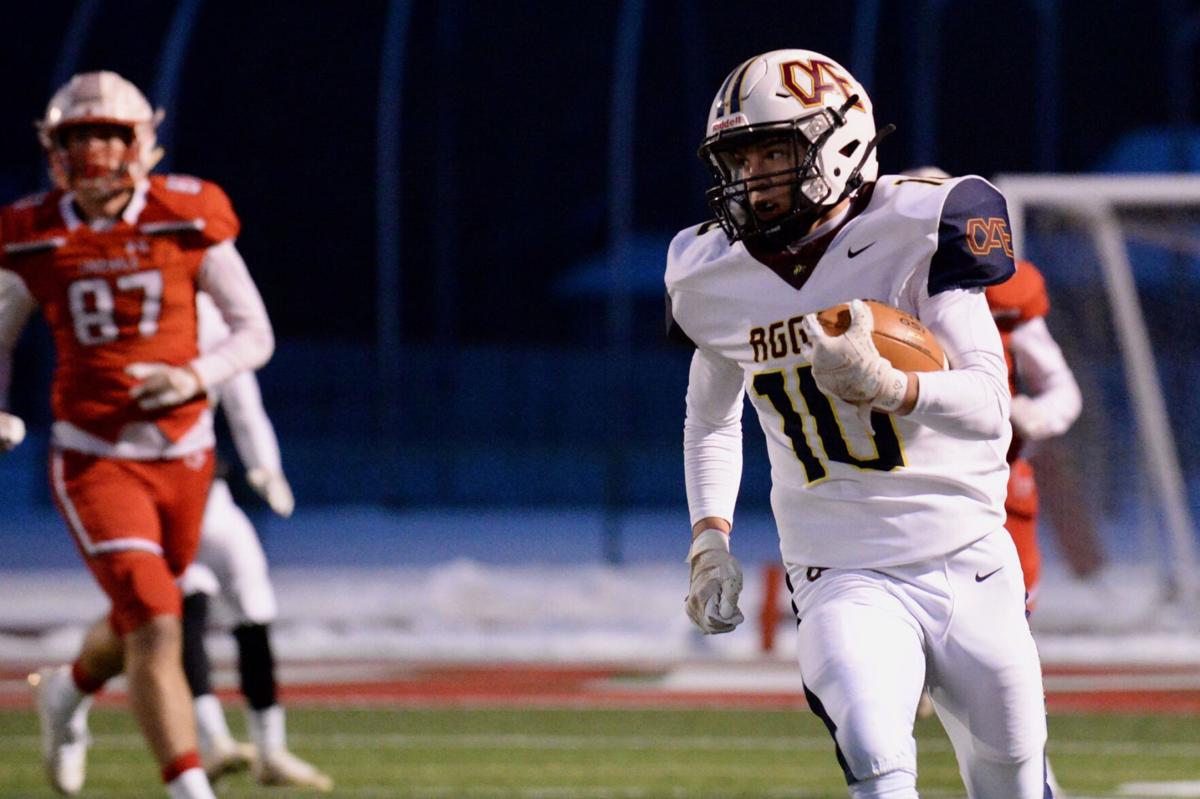 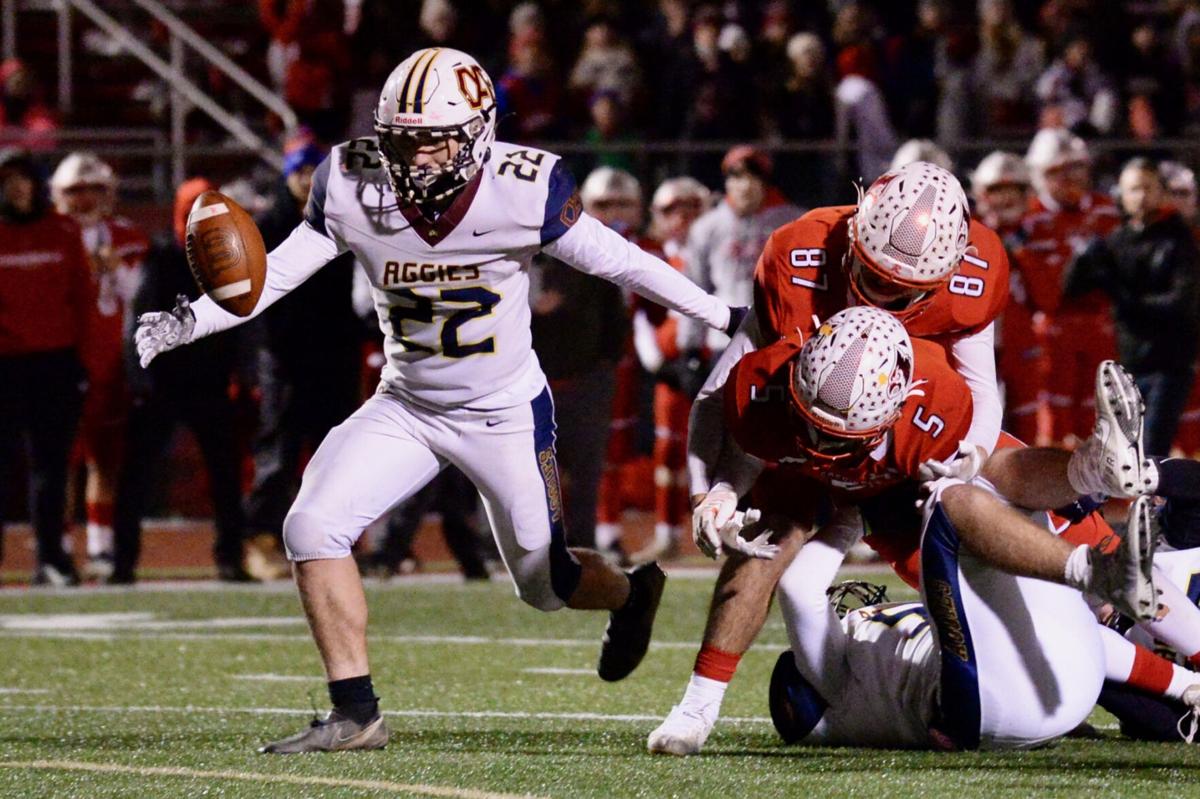 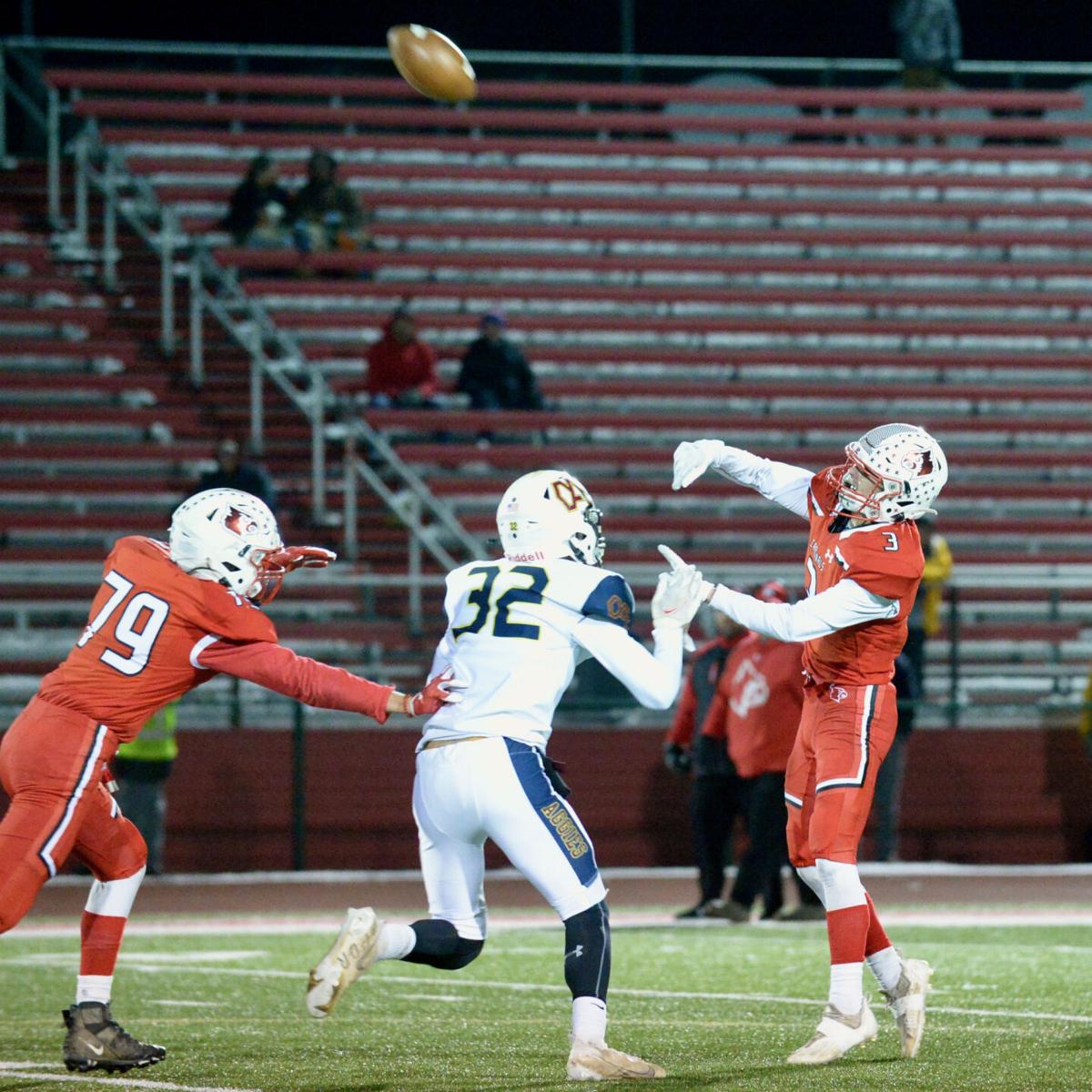 JAMESTOWN — The show goes on.

In a battle between two Class D heavyweights, the Oakfield-Alabama/Elba Aggies (Section V) outlasted the Randolph Cardinals (Sec. VI) in a 12-round bout, 28-22, to advance to the NYSPHSAA semifinal.

Friday’s win was the 12th consecutive victory for O-A/E, which will head into its semifinal matchup with fellow unbeaten, the Tioga Tigers (10-0) of Sec. IV, at 12-0.

After entering halftime of Friday’s tilt with a one-point deficit, O-A/E came out and dominated the second half, beginning with a brilliant special teams play to open the third quarter, which turned the tide and helped the Aggies win the game.

Trailing 22-21 at halftime, the Aggies came out of the locker room and dialed up an onside kick that worked to perfection. On the opening kickoff of the third quarter, O-A/E senior kicker Max Demare lofted a short kick near the Aggies’ sideline, and with the Cardinals’ return team on the retreat, Aggies senior Kameron Cusmano snuck in for the recovery.

The timely call by the Oakfield-Alabama/Elba coaching staff set up what turned out to be the game-winning touchdown drive, as the Aggies used six plays to go 44 yards in under three minutes and found the end zone on a 25-yard touchdown strike from sophomore Bodie Hyde to senior Kaden Cusmano with 9:18 to go in the third quarter.

“It’s something we’ve practiced for a few weeks,” said O-A/E head coach Tyler Winter of the clutch onside kick. “Just waiting for the right opportunity. Randolph utilizes a bail technique for the front line of their kick return team, so we went into the game knowing it was something on the table should we need it.”

What was Hyde’s third touchdown pass of the night helped put O-A/E in front, 28-22, which turned out to be enough as the Aggies’ defense held Randolph scoreless in the second half to help preserve the win.

“Out of all the games we’ve been in this year, that one just felt like a heavyweight fight,” said Winter. “That one felt like it went 12 rounds, and there definitely were a couple of those rounds in there that (I think we lost). But that’s why a fight is 12 rounds. That’s why a football game is four quarters.”

After seizing a 21-8 lead following a 71-yard TD pass from Hyde to junior Noah Currier, the Aggies gave way to the Cardinals down the stretch of the first half, allowing Randolph to strike twice before the break, giving them a slim lead heading into halftime.

Following Currier’s long catch and run, Randolph responded with a long scoring strike of its own, then O-A/E fumbled on the ensuing possession to give the ball back to the Cardinals with just under two minutes remaining in the second quarter. Following the turnover, Randolph used a long pass play to set up a red zone TD and, after a successful two-point try, just like that, it was a 22-21 Cardinals’ lead going into the halftime locker room.

Out of the break, the Aggies executed a few adjustments, including the onside kick, which led to a dominant second-half effort. After allowing two touchdowns in a matter of moments to close the first half, O-A/E shut out Randolph over the final 24 minutes to help punch their ticket to the state semifinal.

Winter said the most critical factor in his team’s ability to close out the game was the play of the Aggies’ offensive and defensive line, led by junior Brayden Smith, who played like a man possessed and finished the game with a team-high 15 tackles, two of which came for a loss. Smith also forced a fumble and provided a strong push on the O-A/E offensive line.

“Winning this game was a byproduct of (our linemen’s) ability to take over the line of scrimmage battle that we weren’t winning in the first half,” said Winter. “They owned it throughout the fourth quarter to (help) finish the game.”

Senior C.J. Gottler helped lead the O-A/E defense with nine tackles and a sack, while junior Connor Scott finished with five stops, three of which came for a loss, a pass deflection and a crucial fumble recovery which helped thwart a potential Randolph scoring drive in the third quarter. Smith forced the fumble.

“Overall, this team is just incredibly excited that they get to keep playing football,” added Winter.

After allowing the Randolph offense to come alive to close the second quarter, the Aggies stepped up down the stretch and limited the Cardinals to under 10 yards of total offense in the fourth quarter. Senior running back Luke Pagett was Randolph’s most impressive offensive player, while junior Jaiden Huntington came up with a few big receptions for the Cardinals.

The difference for the O-A/E offense was Hyde’s production through the passing game, as the sophomore signal-caller finished the win 6-of-12 passing for 184 yards and three touchdowns. Hyde also enjoyed a successful night running the football, finishing with 107 rushing yards on 20 carries.

Beyond the statistics, Hyde made a number of big plays on third and fourth down using both his arm and his legs, including on the game’s final drive when Hyde and senior Gaige Armbrewster provided the yardage needed to keep the clock rolling and seal the win.

Armbrewster finished with 15 carries for 122 rushing yards, including a long, 67-yard jaunt which helped set up the Aggies’ second touchdown of the game, an eight-yard run on a reverse sweep from Currier. The junior speedster finished the win with three receptions for 110 yards and took his lone carry across the goal line. Kameron Cusmano added a 44-yard touchdown reception early in the first quarter, giving O-A/E the first lead of the game before a kick return for a touchdown helped Randolph take its first lead moments later.

“We’ve been through it so much it’s just normal now,” said Kameron Cusmano of the drama in Friday night’s victory. “We just keep our heads, do our thing, and we ended up with the trophy tonight.”

Moving forward, O-A/E will take on Tioga next Friday at Cicero-North Syracuse High School at 3 p.m. The winner advances to the NYSPHSAA title game to be played at the Carrier Dome in Syracuse.

“This win was definitely nice, but we know we still have two more games to play,” said Kaden Cusmano. “We really want that state title for us and the community.”