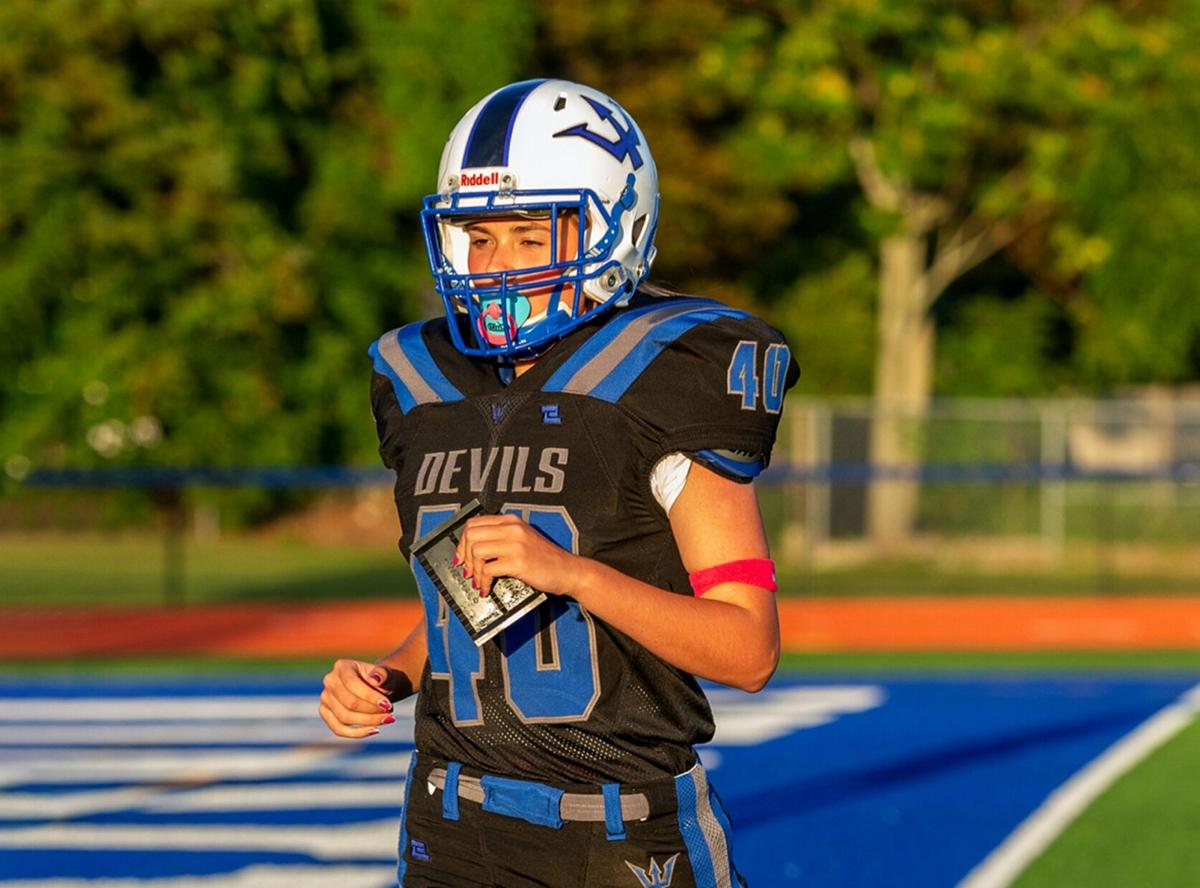 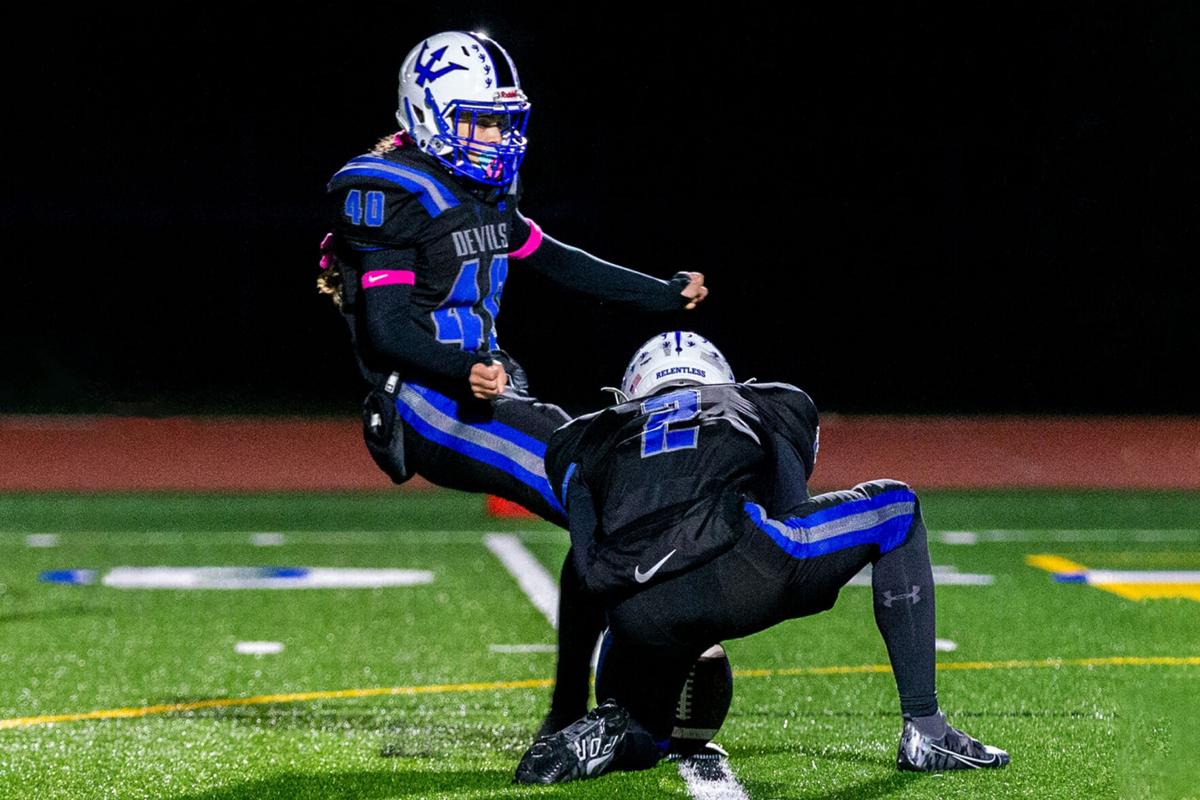 BATAVIA — A few female athletes have graced the gridiron at Batavia High School over the years. But none have been more successful in doing so than Blue Devils junior kicker Julia Petry, who has established herself as a significant member of this season’s sectional championship-winning Batavia football team.

Petry is in her first season as the Blue Devils starting placekicker, advancing to the varsity level following a successful run at the JV level. This season, the junior has made 49-of-54 point-after attempts, a 91% success rate and good enough for fifth on the team’s scoring list.

One can try, but it isn’t easy to downplay Petry’s impact on Batavia’s success this season. Her contributions have helped the Blue Devils climb within three wins of claiming an NYSPHSAA Class B title, which would be the first in program history.

For Petry, her time spent on the football field has been an experience she wouldn’t trade for the world. But she still has one goal left in mind.

Petry’s importance to her team was displayed clearly during Batavia’s lone blemish in Week 6 of the regular season, a one-point loss at the hands of eventual Class B runner-up, the HF-L Cougars, who Batavia dispatched in this past weekend’s title game, 22-14.

In that loss to the Cougars, Petry’s absence forced Batavia to shuffle things in their kicking game, leading to a couple of misses on PATs. Also, Batavia attempted a few two-point tries in that game which both failed, ultimately leading to the narrow defeat. In the Blue Devils win over HF-L in Saturday’s championship game, Petry went 2-for-2 on her kicks.

Since her return to the field, Petry has gotten right back to her successful ways, making kick after kick while helping the Blue Devils reach great heights.

“It’s unlike any other feeling,” said Petry. “It’s cool being out here in general. But to then be out here contributing and actually making an impact on the team and the games — it’s just unreal.”

Over the past number of seasons, the Blue Devils coaching staff has grown accustomed to the luxury of sending out a consistent kicker after touchdowns, including former Batavia athletes Ben Paserk and Alec Wagner. Petry has joined that list with her fantastic effort this season.

“She’s been great for us this year,” said Batavia head coach Brennan Briggs. “Julia has been able to put the ball through the uprights consistently just like those (who came before her) did. She’s done awesome.”

Briggs says that Petry’s fierce work ethic has been what’s allowed her to become a contributor so quickly.

“She works very hard at her craft,” said Briggs. “She has a professional coach she works with in the offseason and in-season she works on her technique and fundamentals on a daily basis.”

During the offseason, Petry works with Sam Watts of the Special Teams Academy.

Through it all, Petry has learned a lot from her experience playing a male-dominated sport. But despite numerous challenges that have presented themselves along her journey, the Batavia junior has continued to push forward, thanks partly to the support she has received from her teammates.

“They’re really supportive, make or miss,” said Petry of her teammates. “If I miss it, I’m coming back, and they’re all telling me you got the next one. Against (Clymer-Sherman-Panama in Week 7), when I had my one miss my first game back (from injury), I was real upset with myself because I know I can do so much better. But a bunch of them on the sideline told me how they know I can do it and how I’m going to get the next one.”

For Briggs and his staff, it’s been a pleasure to watch Petry’s teammates support a player in a unique situation, competing at a unique position such as kicker.

“They have welcomed her with open arms,” said the Batavia head coach. “At the end of the day, she’s a member of the team. Male or female, we are one team all trying to accomplish the same goal. They respect her passion and work ethic, so it makes it very easy.”

Among the challenges Petry has been faced during her time on the gridiron, adjusting to the dynamic of playing amongst the boys has been the most significant adjustment.

“It’s so different compared to playing female sports,” said Petry. “Just the way we interact with each other. With the guys, I feel it’s a lot more loose. Whereas with the girls, it’s a bit more...girly? I guess I would put it. I really like (playing with the girls) and being out here (with the guys).”

Throughout her experiences playing the boys, Petry has gained a newfound perspective, not only when it comes to athletics but life in general. For the Batavia junior, the most important thing is to have no regrets.

“You just gotta go for it. It can be intimidating for sure,” said Petry. “But at the end of the day, do you want to look back at your life and be like, what if I did do that? What if I didn’t do it? You’ve just gotta go all out for it.”

Petry and her teammates are back at it this weekend when Batavia takes on WNY Maritime/Health Sciences in the NYSPHSAA Class B Far West Regional. You can bet your bottom dollar the junior will play a significant role in the outcome of that game.