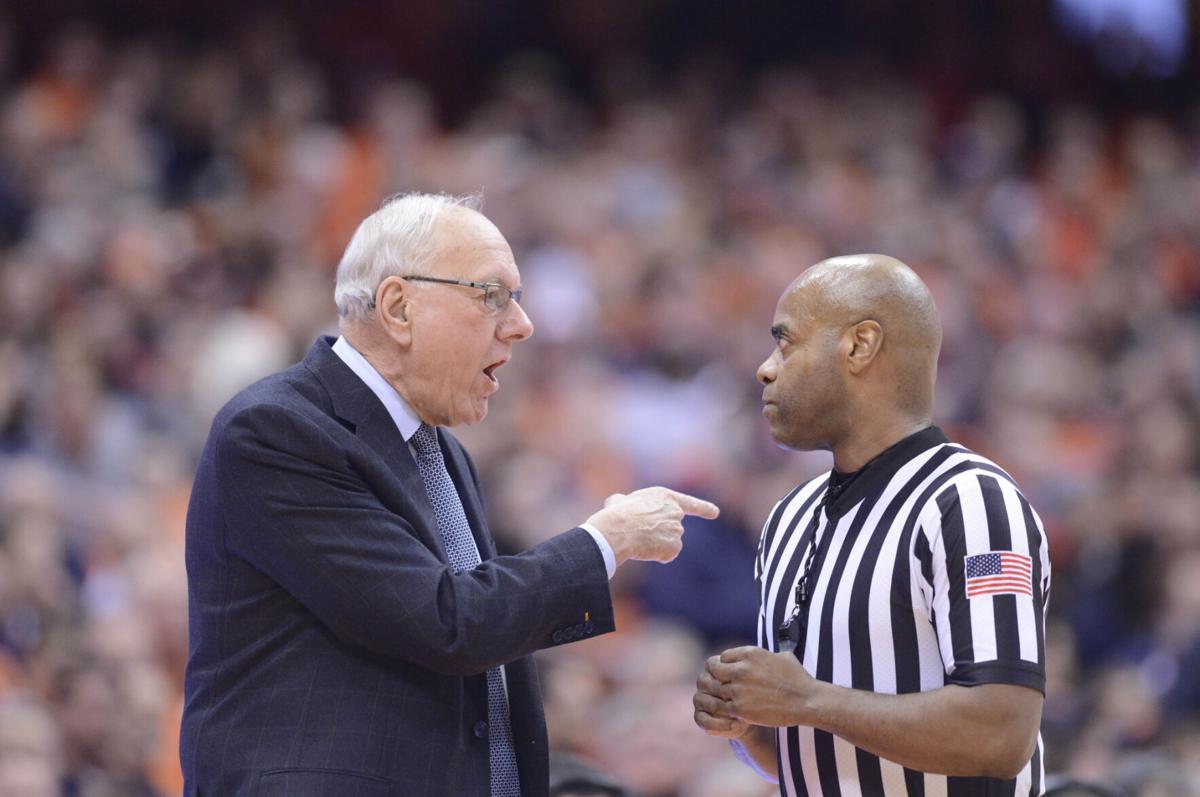 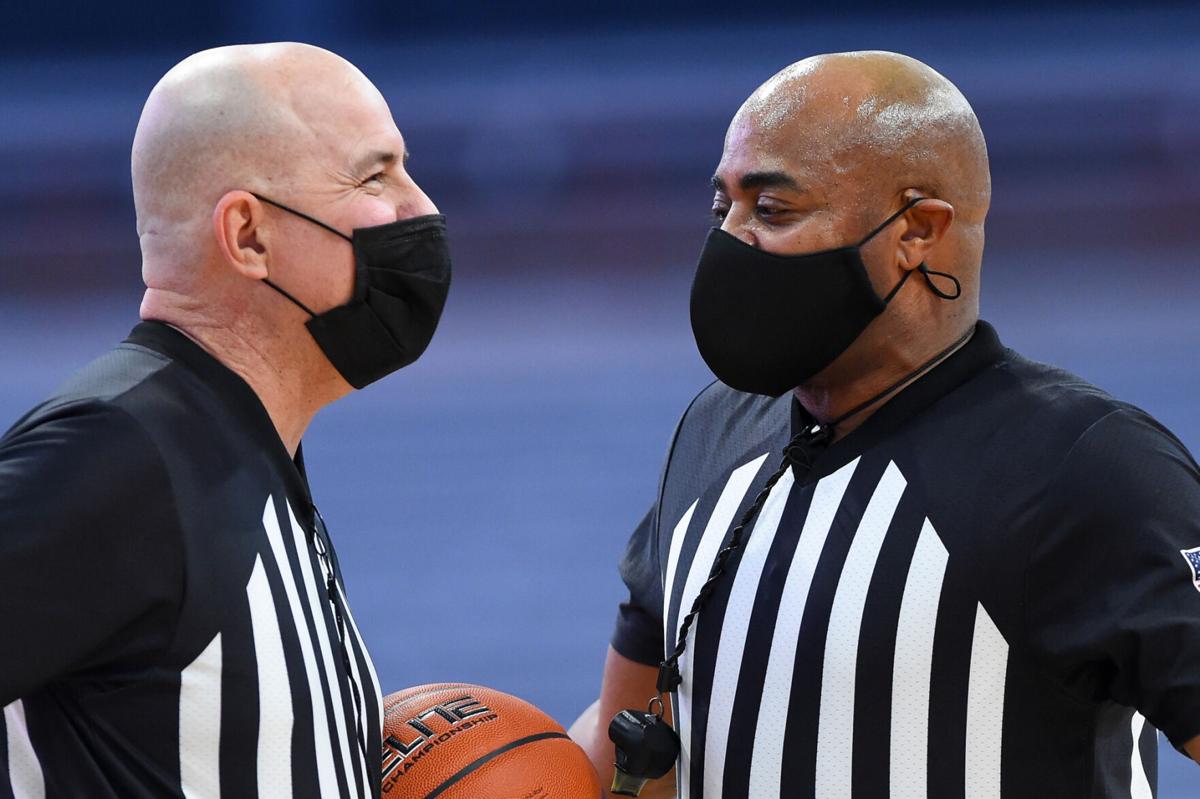 Jan 6, 2021; Syracuse, New York, USA; NCAA referees Brian Dorsey (left) and Jeffrey Anderson (right) talk while wearing masks during a time-out in the first half of the game between the Pittsburgh Panthers and the Syracuse Orange at the Carrier Dome. Mandatory Credit: Rich Barnes-USA TODAY Sports 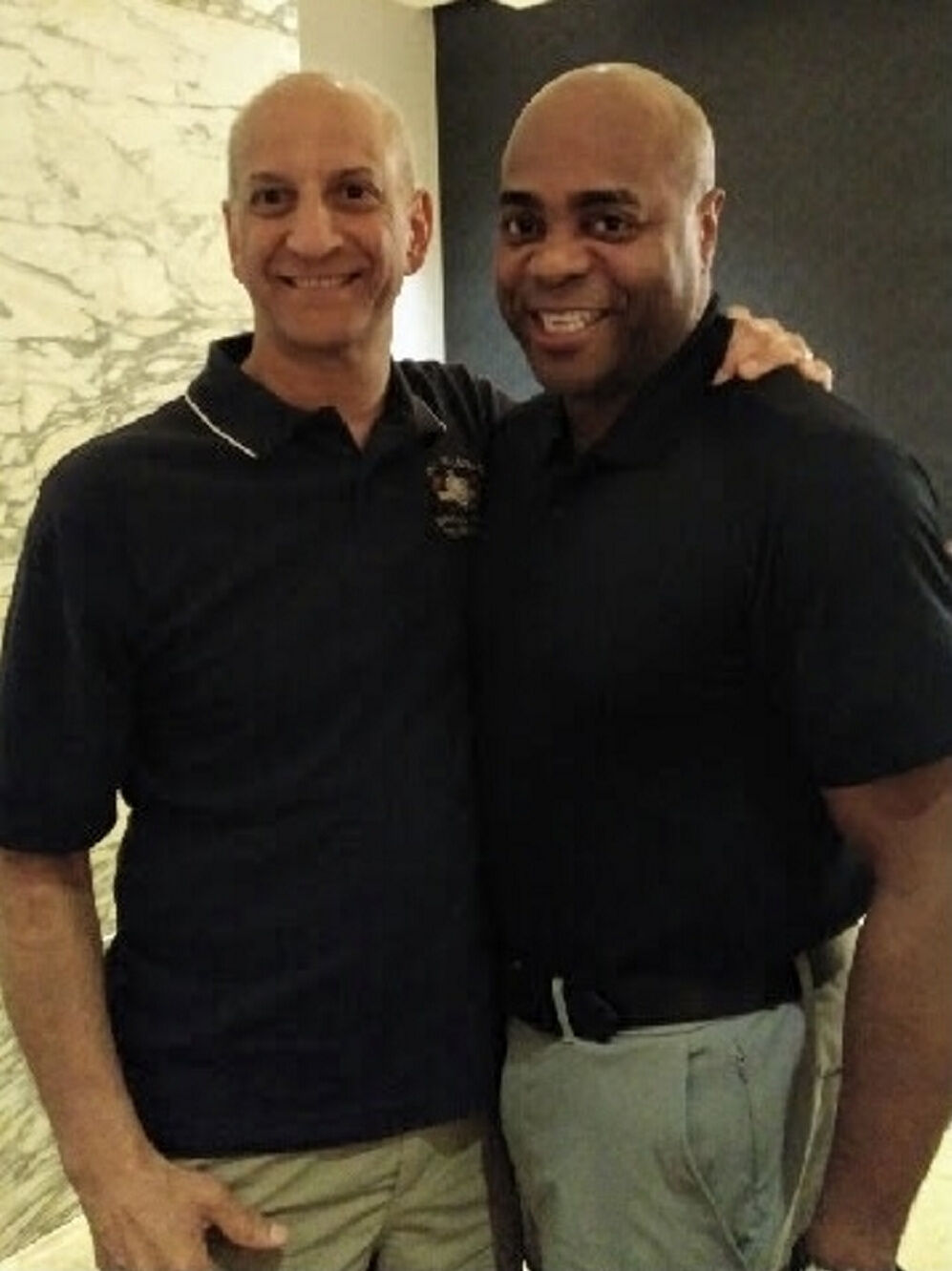 Jan 6, 2021; Syracuse, New York, USA; NCAA referees Brian Dorsey (left) and Jeffrey Anderson (right) talk while wearing masks during a time-out in the first half of the game between the Pittsburgh Panthers and the Syracuse Orange at the Carrier Dome. Mandatory Credit: Rich Barnes-USA TODAY Sports

Rochester native Jeff Anderson has seen nearly everything there is to see during his 20-plus years as a men’s basketball official.

Beginning his career in 1997 with local CYO boys leagues, Anderson has since elevated to the top level of college basketball. He’s officiated hundreds of NCAA Division I Men’s Basketball games, including the past four Final Fours and the 2018 National Championship game between the Villanova Wildcats and Michigan Wolverines.

With countless memories to draw from over the years, perhaps none top the moment that Anderson experienced on the court during this year’s Final Four in an all-time classic matchup between eventual national runner-up the Gonzaga Bulldogs and the UCLA Bruins.

With 3.3 seconds remaining in what many have termed one of the greatest games in the history of March Madness, UCLA’s Johnny Juzang made a short jumper that tied the game at 90 and appeared as if it would send the game into overtime. On the ensuing inbound, Gonzaga pushed the ball up the floor quickly, got the ball in the hands of freshman phenom Jalen Suggs, who promptly fired up and drained a 35-foot bomb to win the game at the buzzer, which sent the Bulldogs to the National Championship Game.

Right there to make perhaps the call of the decade was Anderson, who came through with the hammer down to signify a made bucket and followed that up with raising his hands to the sky to signal a 3-pointer. The emphatic call caught fire on social media as, like many others, Anderson got caught up in the emotion of such a big-time moment and followed it up with the call of his life.

“It’s part of the game sometimes,” said Anderson. “People don’t understand that we (officials) get caught up in the emotion too and the act and passion of it. The guy bangs an almost 40-footer, jump shot, and (keeps) on running. So instincts just took over.”

Following the game, as he began to field texts and calls from family and friends, Anderson’s son revealed that he was trending on Twitter.

“I had people sending it to me because I’m not on Twitter,” said Anderson, who isn’t permitted to have social media due to his profession. “I don’t have a Facebook I don’t have none of that. So everything I get gets sent to me, and that’s how I see it.”

Anderson has become somewhat of a fan favorite on social media due to his unique high-knees running style (more on that later). On Twitter, a fan account has been created, @HighKneesRef.

“Somebody started following me. And then people just pick up and roll with it,” said Anderson, who sees the pros and cons of the fan account. “Just as easy as you are glorified, someone can come back and hammer you too. So that’s why I’m not a fan of it. Thank god everything has been good in that aspect. But I guess it’s just a part of life now. It’s not a bad thing, It’s a good thing, so I guess that’s what makes it alright.”

Anderson is a 1985 graduate of Franklin High School in Rochester, where he grew up. He began his officiating career in ’97 with local CYO games and quickly began to elevate in the ranks. He soon jumped to JV games with IAABO Board 60, and then, before he knew it, he was at the varsity level.

“When I think about it, I think about Board 60 in itself. I think the training and the opportunity is the biggest thing,” said Anderson. “One thing Board 60 has done, just from being all over the country and looking at officials, they train very well, and the training is the first thing that you start with (as an official).”

Anderson says that he’s not sure if he would have made the jump to the highest level so quickly had it not been for the foundation he laid in his home region.

“I owe a lot to Board 60 I really do,” said Anderson, who serves on Board 60’s Board of Directors. “I enjoy just doing my time and giving back to something that has done very well for me.”

During his time with Board 60, Anderson officiated nearly 50 games in the GLOW Region.

“I was actually very big in Genesee County,” said Anderson. “My first year, I did 13-14 games in the Genesee Region.”

“I didn’t know the Lions Club Tournament was so big until I actually had the first game,” he said. “Just to be a part of that and to see how good it was (was great).”

Anderson’s favorite part about small-town boys basketball in the GLOW Region was the rivalries that developed all over the region.

“You don’t forget those places,” he continued. “Because on a Friday night, the gym was packed. Everybody was rooting for who they wanted to win, and you go to places like that, and they become memorable. I’ll never forget my experience in Section V, period.”

“You start seeing how the ball is played in itself, and then you form relationships,” he said. “That’s what basketball is about officiating-wise. It’s forming relationships with coaches - and players too. You have players that like to see you out there also.”

“It comes down to communication and trust,” he continued. “Because once they trust you, you can move beyond that, and you can say what you need to say to them, and they’re going to listen to you.”

Anderson says to open that line of communication with players and coaches, one must first learn to listen rather than speak.

“I always tell the (younger officials), talk less and show your game more,” he said. “Conversation is a big thing. Communication is big between coach and official even more now than anything. If you can communicate, you can do well in this business. With communicating, I always say, I like to hear, listen and apply before I speak.”

That’s one ‘Andersonism’ of which there are many.

“I have my sayings,” said Anderson. “One is hear, listen and apply. It’s one of the best things you can do as opposed to speaking. (As officials), I think we talk too much. We want people to know what we think instead of just hearing what people have to give you.”

When you watch Anderson officiate, it’s hard not to notice his unique style on the court, including a high-knees running form. While many have tried to guess reasons for why an official may elect to use high-knees when jogging up and down the court, Anderson says it came down to two simple factors - health and longevity.

“A good chiropractor friend of mine suggested that I do it to alleviate pain in the back and on the knees,” said Anderson. “So when you run - I try to tell people - like your last 15 feet when you’re coming to a stop (all the pressure is put) on your knees. But if you pick them up high, it takes a lot of pressure off of them, so you’re not getting that jamming into the court when you run.”

Anderson began the new technique about a decade ago and hasn’t looked back.

“It’s probably about 10 years ago when it started,” he said. “I didn’t use to run like this, but (the doctor) suggested that I try it. It’s helped, I have to say that. Some people think it’s a showboat thing, but that had nothing to do with it.”

Anderson attributes his success to the place from which he came, his upbringing and the relationships he’s forged throughout his life - which leads us to another of Anderson’s sayings.

“My roots are strong. Family-wise, friendship-wise they’re strong,” he continued. “When you’re surrounded by good things, good things are going to happen to you. They might not happen when you want them to happen, but they will happen.”

Despite his rapid rise to the height of his profession, Anderson’s road to the top wasn’t always paved in gold.

“On my quest to get to the Division I level, I had obstacles; I had turnbacks,” he said. “But it’s not when you say you’re ready. It’s when they say you’re ready. I just think you have to be ready. And that’s how I always tried to keep myself.”

“When it’s time, you have to be ready and you have to seize the moment,” he continued. “And that’s that motto - I don’t know where I’m going, but I know where I came from. And I came from good roots, strong roots and good friendships and doing people right.”

With a long, successful journey already behind him, Anderson finds himself headed into the prime years of his officiating career, with his game still on the rise.

Having officiated the past four Final Fours, Anderson has asserted himself as one of the top officials in the nation. But what makes his journey so impressive is that he continues to improve his game at every opportunity. During the offseason, Anderson works camps and clinics and seizes other opportunities to enhance his ability as an official.

“I’ve been very fortunate officiating, and I just try to keep getting better every day,” he said. “It’s just been humbling.”

Anderson left prospective officials with a bit of advice.

“Take things from people. It doesn’t matter if it’s negative criticism because negative criticism is a good thing for you too,” he said. “It’s just like anything in life. You learn things - good and bad - and they might not work now, but they will work down the road.”

Anderson isn’t sure where that road will lead him in the future, but he sure knows the road he’s taken to become one of the best in the game.

It’s not necessarily his success that defines him, but instead, it’s the journey that Anderson endured to achieve it that makes him one of the all-time greats.

And he’s thankful for every step he’s taken along the way.