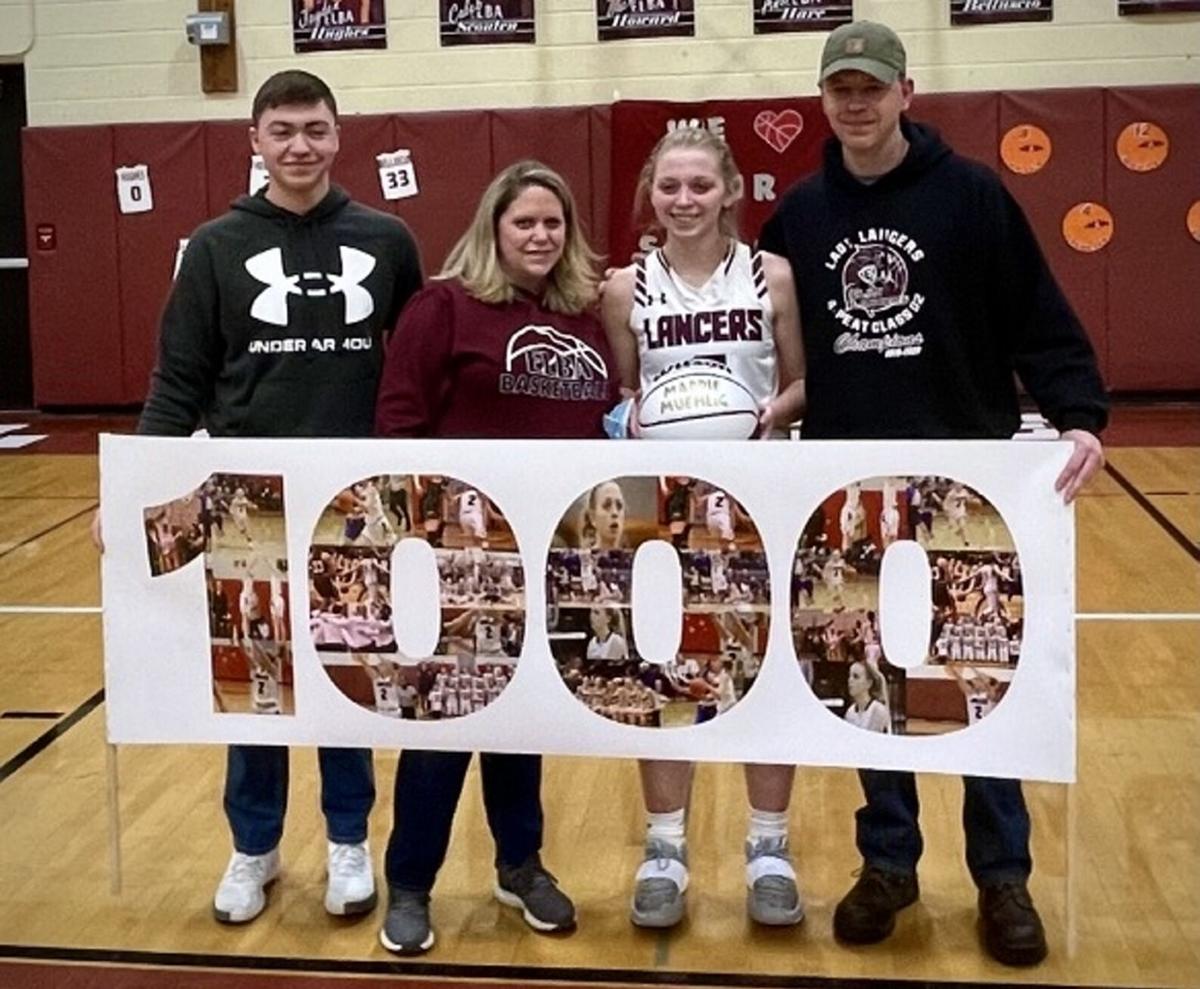 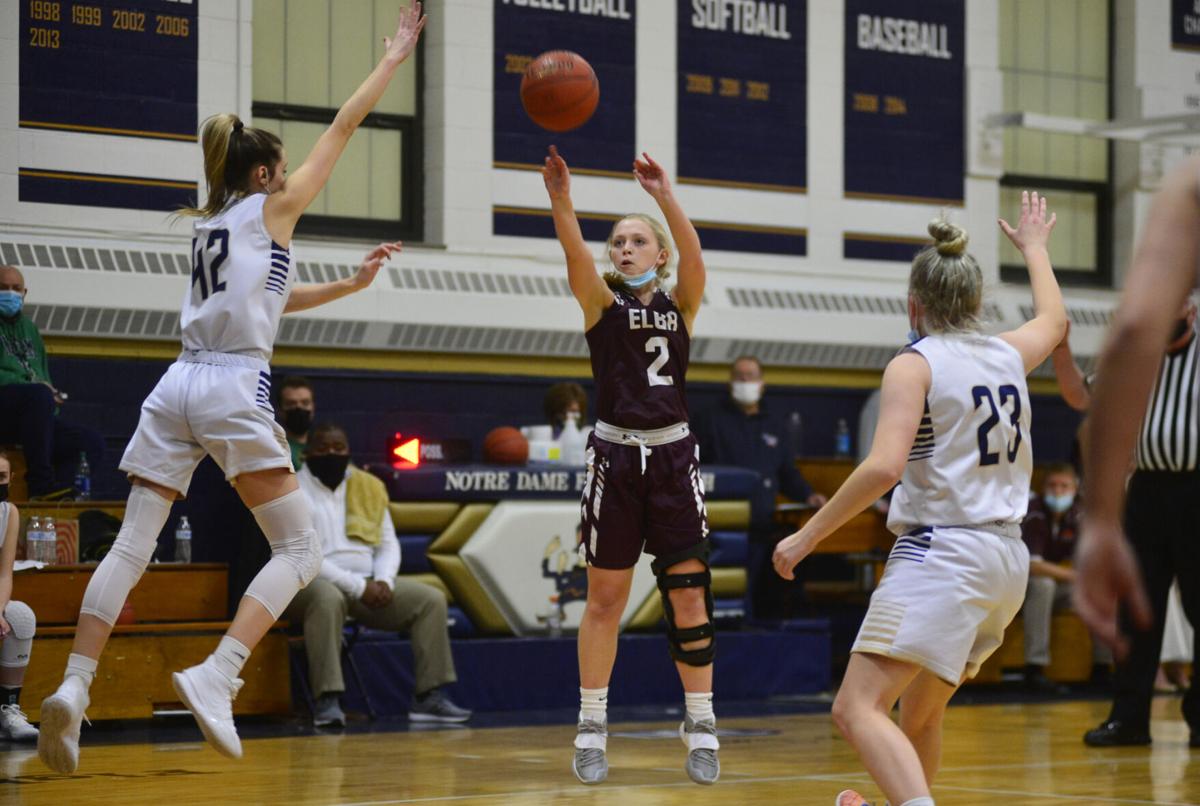 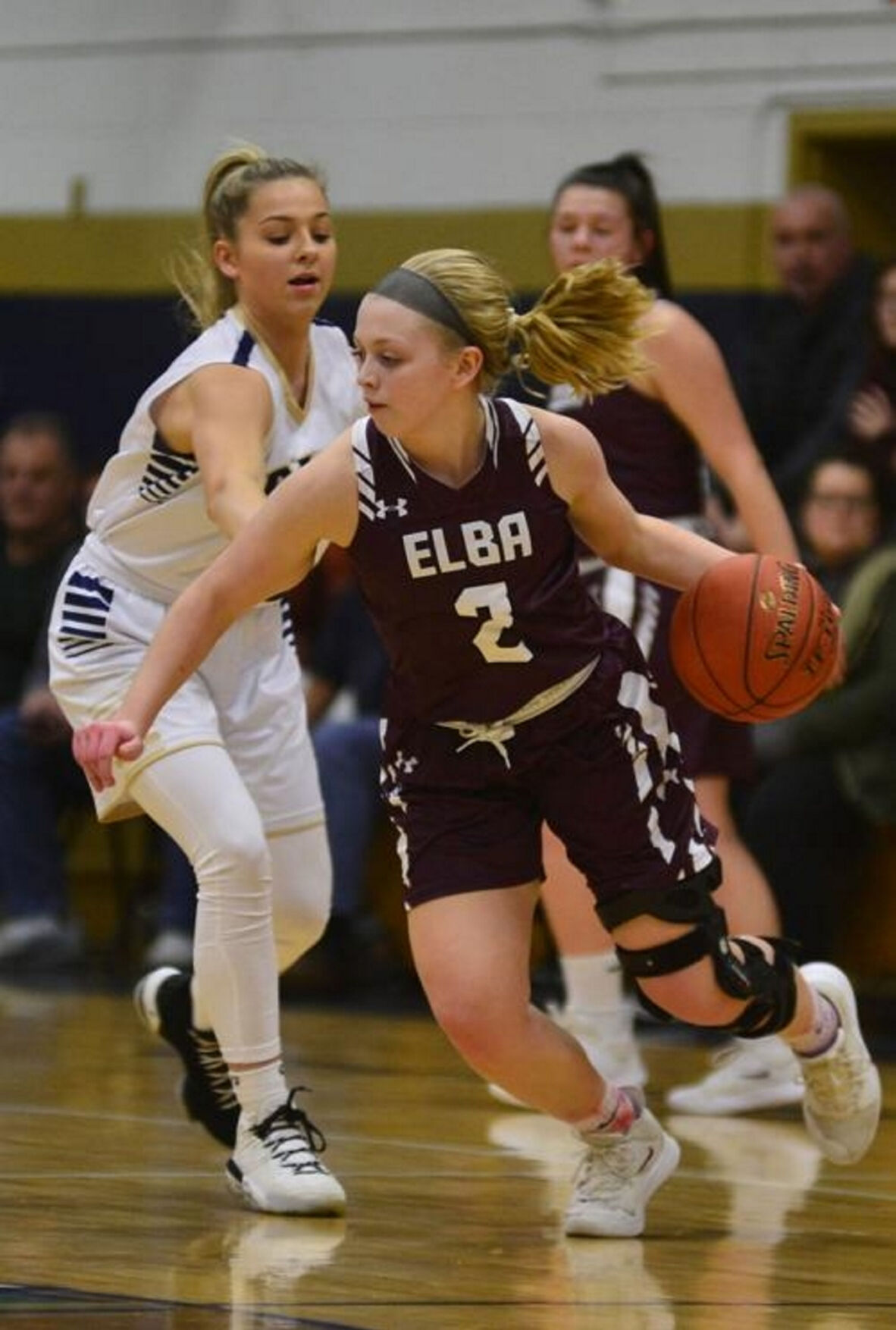 File photoMaddie Muehlig became the second Elba player in as many games to reach the 1,000-point mark for her career.

File photoMaddie Muehlig became the second Elba player in as many games to reach the 1,000-point mark for her career.

ELBA — What Maddie Muehlig has endured along her high school basketball journey is not for the faint of heart. On Monday night, in a Lancers’ win over Attica, the Elba fifth-year senior scored her 1,000th career point, becoming just the seventh player in program history to reach the milestone. But it wasn’t the moment that was most impressive. Instead, it’s what it took from Muehlig to get there that is even more awe-inspiring.

Muehlig’s tribulations began following her sophomore season. A torn ACL while playing in an AAU basketball game during the summer after her 10th-grade year started what’s been a tough road.

Following her first three varsity campaigns, Muehlig had totaled 774 points and helped lead the Lancers to three of an eventual four straight sectional championships. At the time, it seemed as if she was a sure thing to reach 1,000 career points. But the injury to her knee months later cast a bit of doubt on that proposition. The program’s future also took a significant hit, as it had just lost one of its critical pieces for an unknown period.

After the injury, it turned out there was enough time for Muehlig to recover and return for part of her upcoming junior season. But the surgery and rehab that came with the torn ACL were grueling.

Upon suffering the injury, Muehlig headed for the operating table and then went through seven months of training to rebuild the muscle in her injured leg. During those seven months, Muehlig underwent intense rehab twice a week with physical therapists Lisa Lavrey and Jim Turcer, and did so independently for the other five days of the week. The recovery process consisted of many different exercises centered around strength training and plyometrics to strengthen the muscles in her leg.

After missing her team’s first six games, Muehlig returned for her junior season and once again helped lead the Lancers to another championship - their fourth straight. She finished last season with 164 points following the extended recovery process, placing her career total at 938. Then, this past summer, tragedy struck again.

This time, the timing of the injury came a bit closer to the start of the winter season, meaning immediate surgery and extended rehab would force her to miss much, if not all, of her senior campaign. Determined not to let the most recent setback define the end of her high school career, Muehlig made the difficult decision to move forward and play her final year on a torn ACL.

“I remember thinking how long there was between (the injury), which happened in August, and November. And it wasn’t long enough to come back from a surgery,” said Muehlig. “So I thought to myself, ‘well, I guess I’m just going to have to suck it up because I’m not going to miss my senior season.’”

After suffering her injury this summer, Muehlig rehabbed for a brief time with leg exercises and participated limitedly in the fall soccer season. She has played in all seven games for the Lancers to begin the basketball season.

“Essentially, an ACL keeps everything in place in the knee and provides stability,” said Muehlig, “So, playing without one, I’m just at risk of episodes of the knee moving out of place and additional damage. That’s been my situation this season.”

Muehlig has suffered a few setbacks through the fall and early this winter. But through seven Elba wins, she’s scored 64 points, including a game-high 21 points against Attica on Monday. In the Lancers’ victory over the Blue Devils, Muehlig knocked down a jumper during the third quarter to reach the 1,000-point mark.

“It obviously means a lot since it’s such a coveted accomplishment,” said Muehlig. “But besides that, it means a lot to me to get it alongside Leah, who’s been on varsity with me for (five) years. And Brynn (Walczak) who will be getting it soon.”

Walczak, another member of Elba’s five-year senior triumvirate, is presently just 29 points away from the 1,000-point plateau.

The past couple of seasons have been a grind for the Elba senior point guard. But in the end, all of her struggles have been worth it.

“It’s definitely been difficult the past two years,” she said. “But it just makes it more special.”

For her teammates and coaches, watching Muehlig persevere the past two years has been inspiring.

“I’m sure the list of girls who came back from an ACL injury in high school is pretty short,” said Elba head coach Tom Redband. “To then go on to score 1,000 points - the mental and physical toll it takes on an athlete could make a lot of players give up and throw in the towel. But she persevered and made it a priority to be there for her team her senior year. That is something I’ll never forget, and neither will her teammates.”

Having Muehlig around the past five years has been a boon for the entire program, says Redband. Not only has her play on the court help pace the Lancers’ efforts, but her mentality has also spread throughout the locker room.

“Maddie set the tone with her work ethic at a very young age and her fearlessness. She knew the difference between right and wrong and what it took to be a great player,” said the Elba head coach. “It didn’t matter what anyone else did. She was going to put the work in to be her best and the best. That ultimately rubs off on people.

“There is no secret to what Maddie has done. She’s made sacrifices, she’s been disciplined, she’s been tough and was coachable at a very young age,” Redband added. “That led to her putting herself in a position to be ready for the big show when her number was called. There was never any doubting her focus or determination to help the team win in any way possible. Maddie never coasted along on her talent. Her growth mindset to want to get better is next level.”

It won’t be easy for Redband to watch a player and person of Muehlig’s caliber walk out the door at the end of the season.

“Maddie soaked in the coaching, and it showed early on with how much I trusted her and how much she gained the trust of her older teammates,” said Redband. “I still get dirty looks from her when I mess up the scoring in our (competitions) during practice. That girl wants to win, and she demands those around her to be prepared and to compete. She was never embarrassed to be the best.”

Sometimes, when an athlete like Muehlig comes along, her drive to succeed has the potential to rub teammates the wrong way. But that hasn’t been the case with Muehlig in Elba. Instead, what the Lancers have is a group of athletes that share the same drive and pursuit of greatness, which has made the experience of wearing the maroon and white everything Muehlig could have hoped it would be.

“It’s been really cool to play with some of my best friends, but also people who put in the time and work at basketball,”she said. “It’s really special to be able to play with childhood friends, and they’re all great people and have to put in the time to achieve the accomplishments we’ve gotten over the years.”

Transitioning to the next phase of her life won’t be a simple task, added the Lancers’ senior. Elba basketball has become a significant part of her everyday life.

“Spending almost all year together between a long season and offseason work has made our teams so close,” said Muehlig. “It will definitely be hard to let go of.”

No matter what current or former Lancers athlete you ask, playing at Elba is a remarkable experience. For Muehlig, who Redband pulled up to varsity toward the end of her seventh-grade season, her near-six years of varsity basketball played out as advertised.

“It’s been nice to have really good players to look up to growing up,” she said. “Then, to be able to carry that on to the girls coming up through the program. The atmosphere for Elba basketball is the best in the Genesee Region.”

Muehlig now looks ahead to what she hopes will be the Lancers’ fifth straight Section V Championship run. It would be a feat that, if accomplished, will go down in high school basketball lore.

Another feat that will forever be remembered, at least in Elba, is what Muehlig accomplished in her recovery. Determination is a good word for it. Another is grit.

Muehlig is one of the toughest athletes this region has seen in quite some time. She is also one of the most talented. That’s a combination that you don’t often find, but when you do, you get a player as significant as Muehlig.

She’s already achieved an incredible amount of team success. Now the Lancers’ senior has a monumental individual accomplishment that cements her legacy as one of the greatest players in Elba and GR League basketball history.