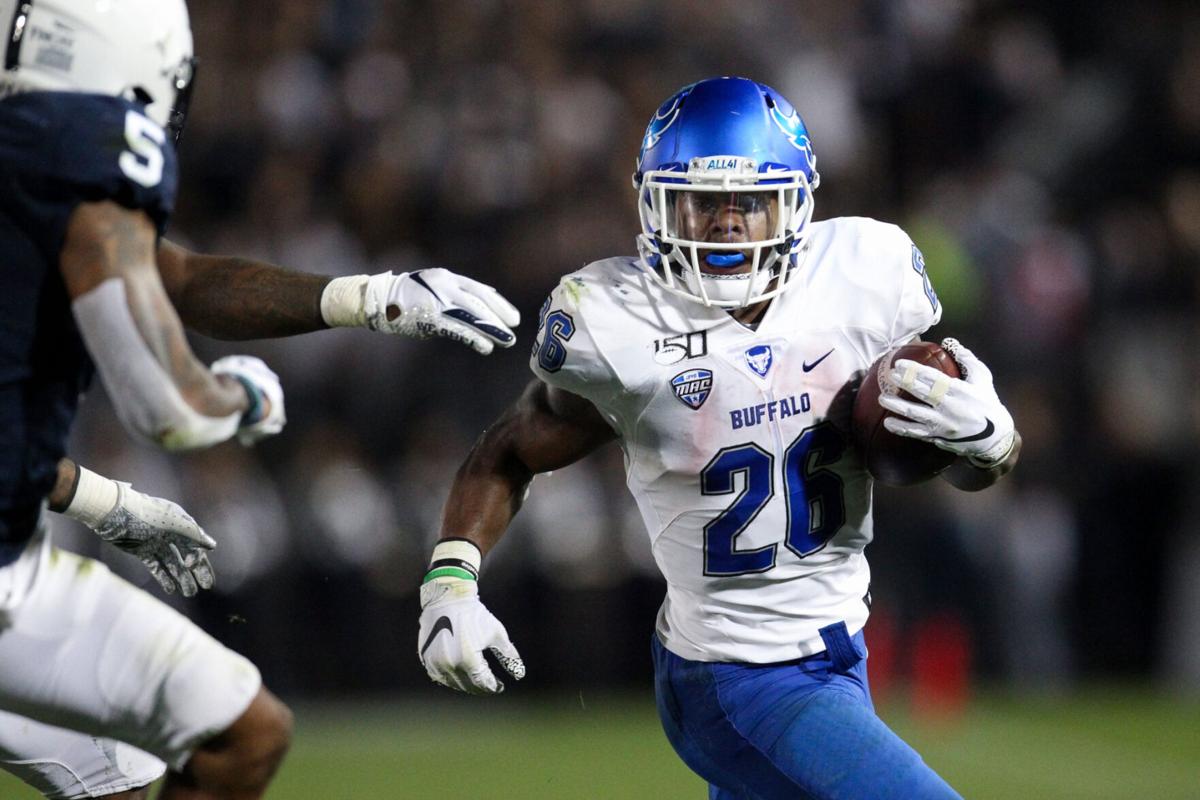 Wire photoUB’s Jaret Patterson is one of the top running backs in the nation and on Wednesday he started a movement to get the MAC back to football. 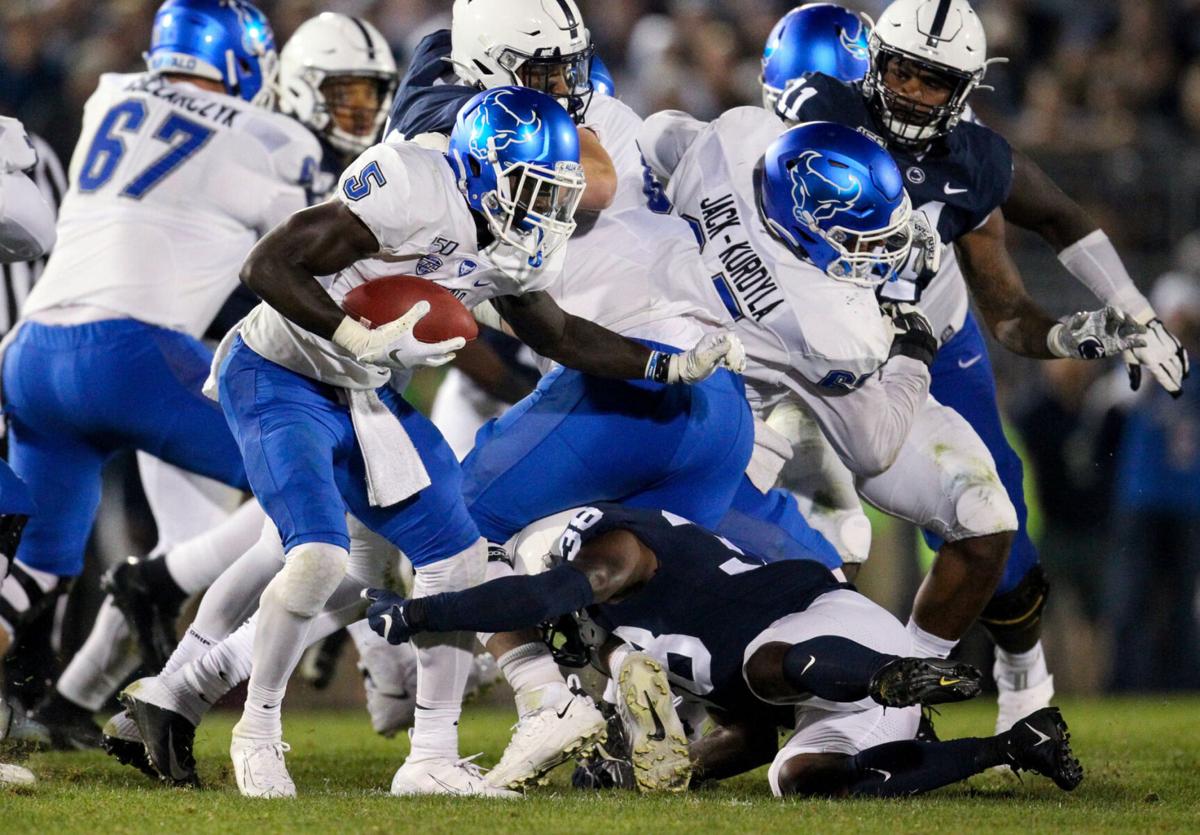 Matthew O’Haren/USA TODAY SportsBuffalo Bulls running back Kevin Marks (5) runs with the ball during the third quarter against the Penn State Nittany Lions at Beaver Stadium.

Wire photoUB’s Jaret Patterson is one of the top running backs in the nation and on Wednesday he started a movement to get the MAC back to football.

Matthew O’Haren/USA TODAY SportsBuffalo Bulls running back Kevin Marks (5) runs with the ball during the third quarter against the Penn State Nittany Lions at Beaver Stadium.

BUFFALO — On Wednesday afternoon University at Buffalo junior running back Jaret Patterson posted on Twitter about how he and his teammates are more than ready to get back to football, especially after the Big Ten reversed course and decided to have a fall season after all. Patterson’s thoughts soon received much attention.

As of Thursday afternoon, it’s beginning to look more and more like Patterson and the Bulls may just get their wish.

As first reported by the Toledo Blade, the Mid-American Conference presidents are planning on meeting on Saturday to discuss and review a possible 2020 fall football season amid the momentum to begin playing again, started by the tweet of the Bulls star running back.

“I’m happy for my brothers in the Big 10 who’ll get to play this season,” Patterson wrote on Twitter. “But it’s been over a month since we cancelled our football season. The reason most of us have worked so hard in our lives, gone. The reason a lot of us were even able to go to college, gone. And now 70% of college football is playing. I know we don’t have 100 million dollar budgets in the MAC and we’re not going to win a Nat’l Championship but if it’s not about the money, why can’t we play? The guys that ARE playing don’t work harder than us. They don’t care more than us. Why can’t WE play? Respectfully, we deserve to have answers why can’t we do it safely when all these other places can? – Buffalo Bulls football team.”

According to reports, the MAC presidents are considering a six or eight-game season that would begin in late October, with a conference championship that would take place at Ford Field in Detroit.

In early August, the MAC became the first FBS conference to postpone football for the 2020 fall season amid concerns about the ongoing coronavirus pandemic.

In a change that many considered long overdue, the Big Ten announced on Wednesday that it would, in fact, have a fall football season after all, despite announcing a postponement of the campaign on August 11. Reports have also surfaced of the PAC-12 — which has also delayed the start to it’s season — is also considering changing its decision.

On Wednesday, despite the growing sentiment for the MAC to return to play, it certainly felt as though it was falling on deaf ears.

“Currently there are no plans to play a fall season in any sport,” MAC commissioner Jon Steinbrecher said in a statement on Wednesday. “We are focused on providing our fall student-athletes meaningful competitive experiences in the spring.”

On Thursday, Kent State head coach Sean Lewis was one of the first head coaches to reach out to the Mid-American Conference in an effort to get them to reconsider its previous decision.

“Considering recent developments in sports and in the medical world, we must revisit the decision to cancel the 2020 season,” Lewis wrote on Twitter. “Other universities have clearly demonstrated that our student-athletes’ health may be best safeguarded within the confines of our football program where we have the best medical resources available. “Our players want to play. They have earned the right to play and I feel we must exhaust all options for them to do so.”

With the decision to try and move forward, the MAC will be looking into a number of issues that are COVID-19 related, including testing and the finances involved to have rapid and widespread testing.

Medina graduate and current Toledo wide receiver Jalin Cooper also took to Twitter on Wednesday to voice his frustration over not having a season and his support for the movement started by Patterson.

“It makes no sense that the ACC, American, Big 10, Big 12, SEC, Sun Belt are playing football safely this fall while Pac 12 & Mountain West are looking to return and @MACSports is the only one saying we won’t play,” Cooper wrote. “We deserve our opportunity as much as anyone else! -LetUsPlay.”

For reference, the Big Ten season is scheduled to begin on October 24 with an eight-game regular season and a conference championship.