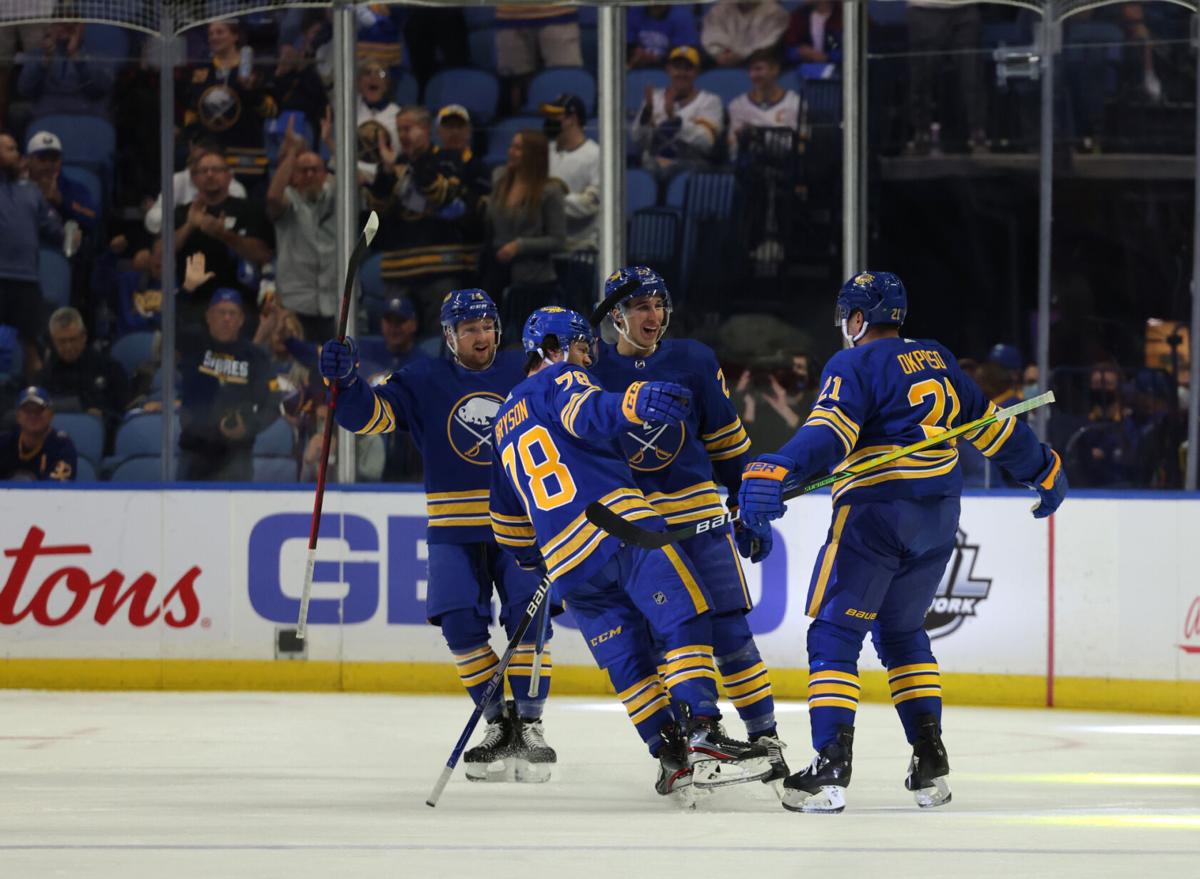 Timothy T. Ludwig/USA TODAY Sports | Sabres right wing Kyle Okposo (21) celebrates his goal with teammates during the first period of a win over the Montreal Canadiens at KeyBank Center. 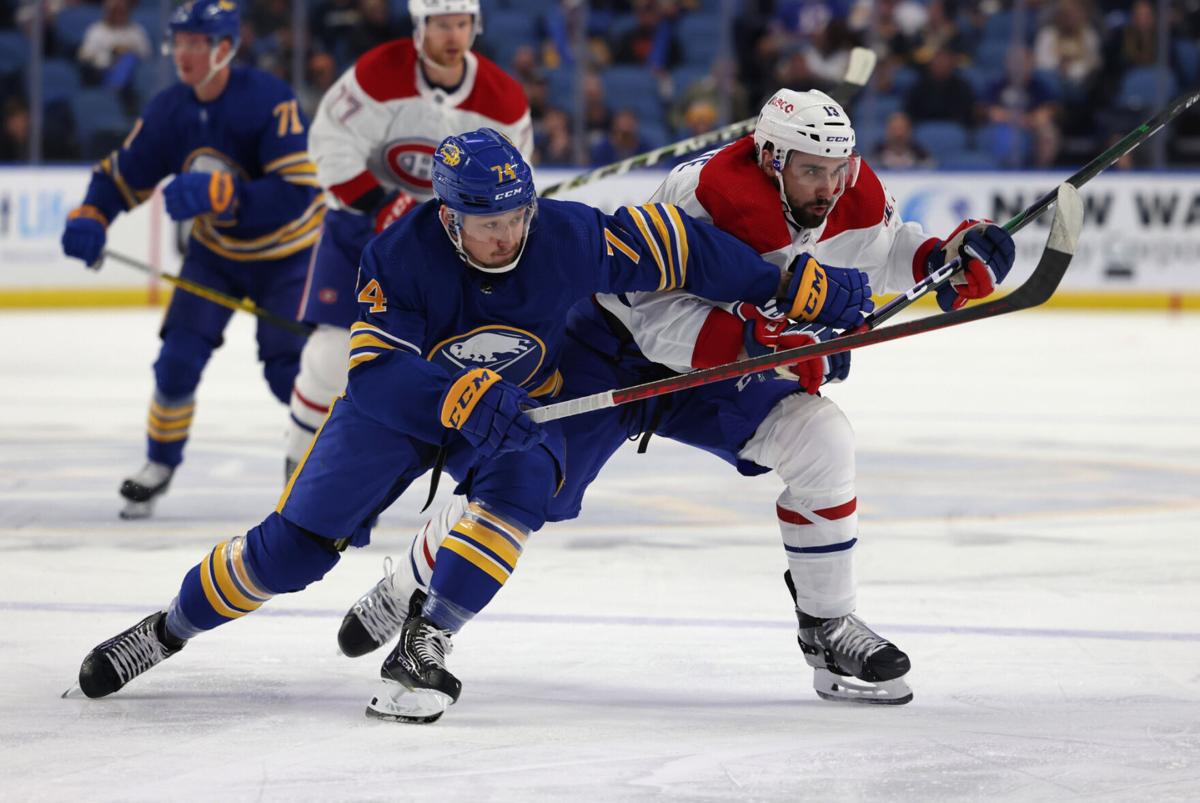 Timothy T. Ludwig/USA TODAY Sports | Sabres right wing Kyle Okposo (21) celebrates his goal with teammates during the first period of a win over the Montreal Canadiens at KeyBank Center.

BUFFALO — As a wise man once said, ‘That’s why they play the games.’

Very little was expected from the Sabres as they took their home ice for an opening night matchup with the Montreal Canadiens. But Buffalo turned those expectations upside down and came through with a solid effort, defeating last year’s Stanley Cup finalist, 5-1, in front of a sparse crowd at Key Bank Center.

The 8,647 fans in attendance on Tuesday night enjoyed an exciting show put on by the youthful Sabres. Those who decided not to make the trip were left wishing they did.

“You could see the emotion on the bench, on the ice, in the crowd — everywhere tonight,” said Sabres alternate captain Kyle Okposo. “We definitely drew off the fans, drew some energy from them, and it was great to have them back in the building.”

Buffalo dominated the first period of Thursday’s season-opener, seizing a 2-0 advantage heading into the first intermission on goals from Okposo and fellow alternate captain Zemgus Girgensons. After Montreal cut its deficit to 2-1 during the second, the Sabres answered with two more tallies before the second intermission to push its lead to 4-1 heading into the final stanza. Buffalo followed a strong second with a solid third period to help give starting goaltender Craig Anderson his first victory of the season.

“I don’t know what the future holds,“ said the 40-year-old Anderson, who admitted he has considered retiring the past few offseasons. “But if I go out there every day and prove to the guys that I want to be out there and earn it, and just like everyone else has to earn it, whether you’re 40, 15, 25 — it doesn’t matter. It doesn’t matter the age. It comes out to what your work ethic (is).”

Anderson finished the win with 30 saves, including a big stop early in the first period while Buffalo was on the power play. With the Canadiens shorthanded, Anderson came through with a left-pad save on a breakaway that set the stage for a quality night for the veteran netminder.

“Playing goal, your job is to make timely saves,“ said Anderson. “It’s a tough position to be in. Definitely a mental battle. But at the same time, the rewards are high when you can step up for your team and give them that lift.”

Following the first period goals from Okposo, whose came on the man advantage 6:40 into the game, and Girgensons (17:35), a second-period tally from Montreal’s Chris Wideman cut the Canadiens’ deficit to 2-1 with 10:27 to go in the frame. But Buffalo wasn’t finished yet.

A power-play goal from Victor Olofsson answered Wideman’s tally minutes later with 2:55 to go in the period, then Anders Bjork scored to make it 4-1 with 56 seconds remaining until the third. To open the final frame, Buffalo’s Tage Thompson found the back of the net to increase the Sabres’ advantage to 5-1 with 15:31 remaining. That’s where the score would stay, as Buffalo walked away with an unexpected win to begin the season.

“I think the work we put in during camp is what carried over to this game,“ said Girgensons. “Every guy wants to work hard and it’s great to see.”

To go with his first-period tally, Girgensons also assisted on Bjork’s goal, giving the Sabres alternate captain his first multi-point game since a win over the Winnipeg Jets on Feb. 23, 2020. Colin Miller assisted on both Girgenson’s and Okposo’s first-period tallies. Like Okposo’s and Olofsson’s, Thompson’s goal also came on the power play, with Jeff Skinner assisting on Thompson’s and Olofsson’s tallies.

The Sabres controlled the action throughout Thursday’s win and outshot Montreal, 36-31.

“I think (the fans) energized our players — there’s no question,“ said Granato. “They felt they were playing for more than the 20 guys on the bench and that was kind of cool.”

Buffalo begins the season at 1-0 and looks forward to a home matchup with the Arizona Coyotes on Saturday afternoon. Puck drop is scheduled for 1 p.m. at Key Bank Center.