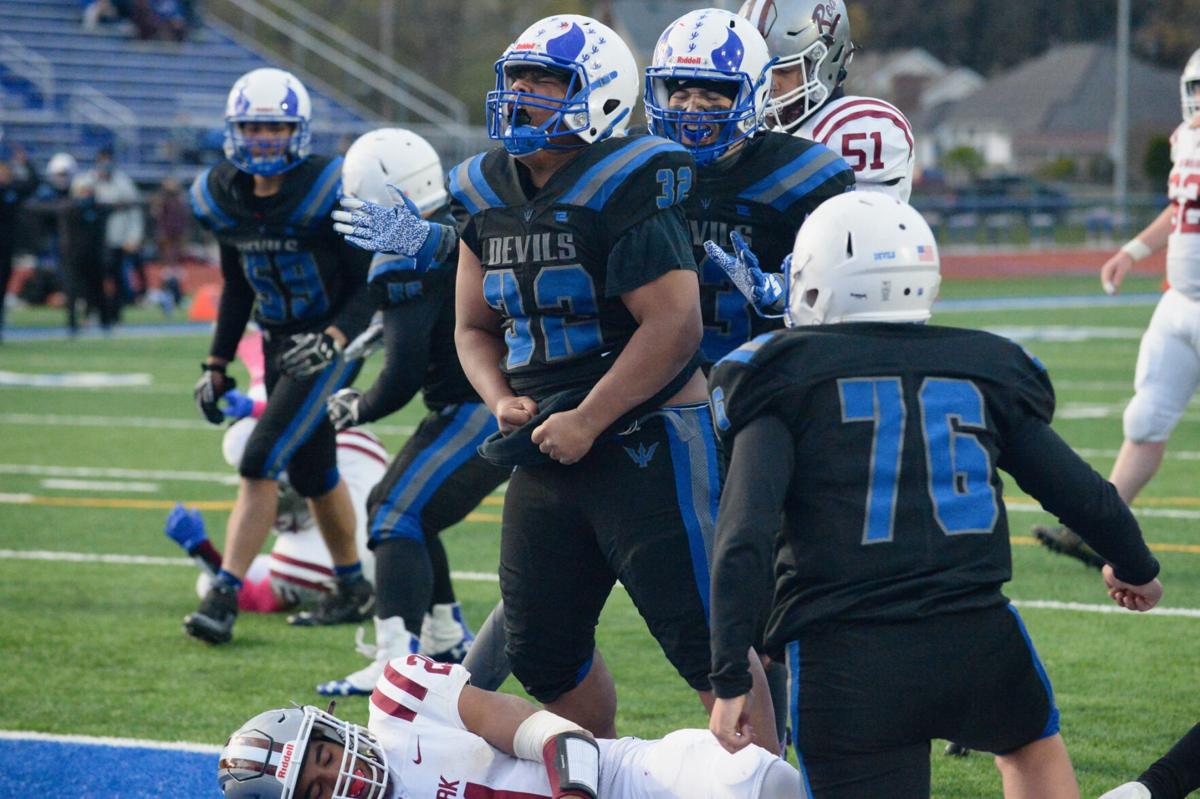 Alex Brasky/Batavia Daily News | Batavia senior Jayden Osborne makes a tackle in the end zone. The Newark runner was ruled down at the one-yard line. 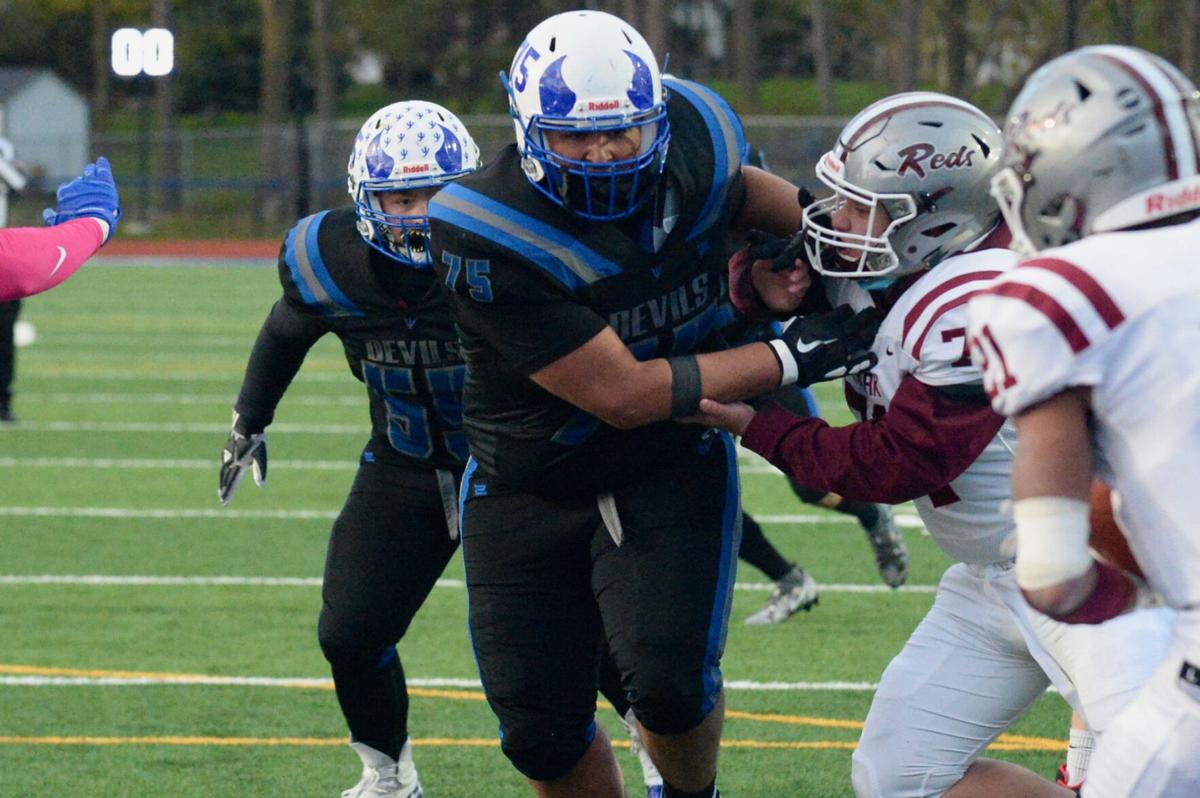 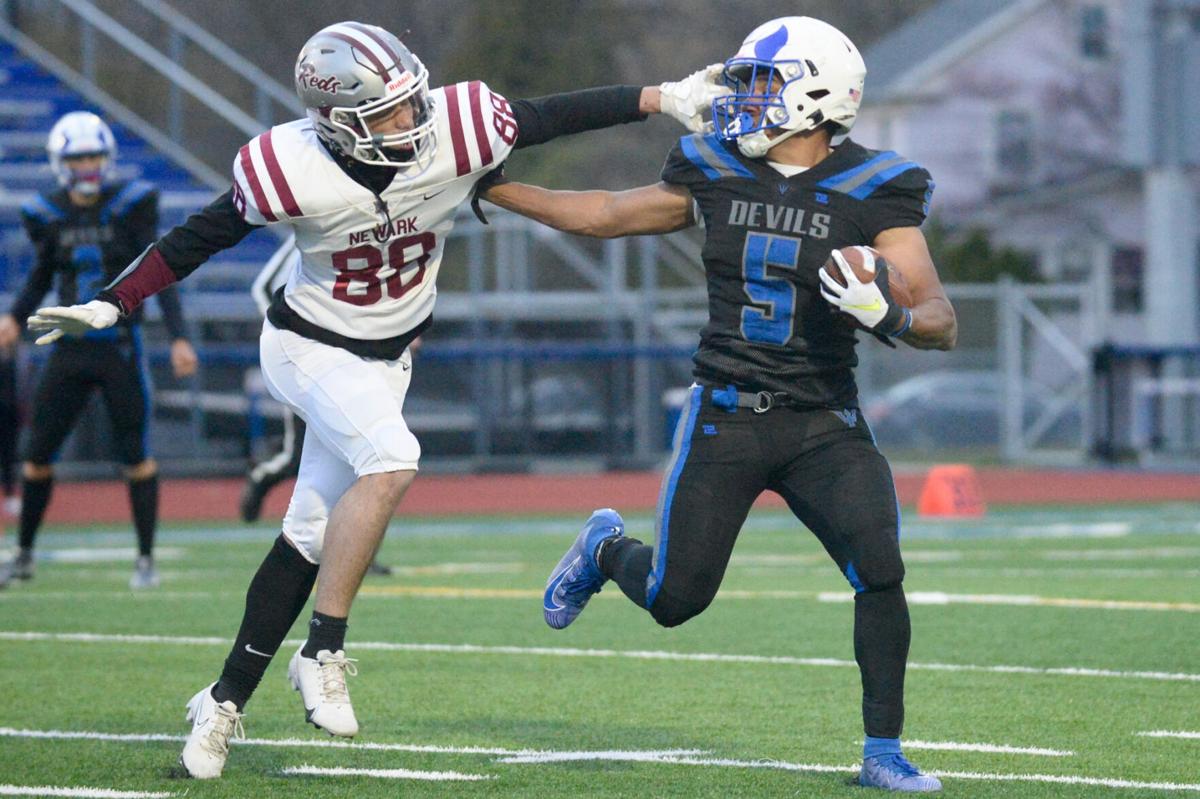 Alex Brasky/Batavia Daily News | Batavia senior Jayden Osborne makes a tackle in the end zone. The Newark runner was ruled down at the one-yard line.

On Sunday, in a 49-13 blowout victory over the Reds in the Section V Class B Semifinal, Briggs was more than happy with how his Blue Devils performed. Batavia moved past Newark to advance to its fifth Class B Final since Briggs took over the Blue Devils varsity team nine years ago.

“I’m very excited about what we brought tonight,” said Briggs postgame. “Our guys knew they had a dud against (Newark) the first time, and we didn’t come ready to go. Tonight I knew they’d be dialed in, and they got the job done. I’m proud of them.”

Batavia senior Terrez Smith was unstoppable in Sunday’s Class B Semi, totaling 16 carries for 153 yards and three touchdowns while adding two more scores via kick returns and well over 200 return yards. Smith’s massive night started on the first play of the game when he took the opening kickoff 78 yards to pay dirt. Late in the game, following Newark’s second TD of the night, Smith took another kickoff 85 yards to the house.

“This is my senior year. A lot of us didn’t think we were going to have a chance to play together,” said Smith. “When we got the news that the season was coming, since then, I just got to work.”

Smith’s work has paid off to the tune of about 1,600 all-purpose yards and 22 total touchdowns through his team’s seven wins.

Batavia junior quarterback Jesse Reinhart also had a big night, throwing just six passes but completing three of them for 117 yards and two long TD passes to wide receiver Tyler Budzinack. The senior pass-catcher finished with just two grabs, one for a 34-yard score and one for a 46-yard score, which came on a 4th and 16.

“Our whole team had something to prove tonight,” added Smith. “That game we played against them a few weeks ago, that was not us. I don’t know what went on. But we practiced hard this week, and we kept that gang-tackle mentality.”

The Batavia defense was on point throughout the night, recording a safety and three turnovers (one interception, two fumbles) while holding the Reds (3-4) to under 100 yards of total offense before a late 40-yard touchdown pass from Travontay Murray came against the Blue Devils’ second team.

Junior linebacker Kaden Marucci was a stud once again for the Blue Devils, finishing with 14 tackles and a forced fumble. Sophomore linebacker Mathew McWethy came through with a big night, recording seven tackles and a forced fumble. Junior defensive lineman Dan Saeva made six tackles, one of which came in the Reds’ end zone for a safety, and sophomore defensive end Garrett Schmidt made six stops for the Blue Devils. Reinhart came away with an interception, and seniors Alex Hale and Jayden Osborne combined for 10 tackles.

“I think when we played Newark at their place, we got a taste of what a potential loss might feel like,” said Hale. “I think we brought that swag back.”

Batavia advances to the Class B Final, where they will meet rival HF-L at HF-L High School this Saturday.

“We’ve had this game circled on the calendar since Week 1,” said Smith. “We just have to go through practice, take it day by day, focus and just go play our game when we show up.”

The Cougars beat Batavia in the two teams’ last matchup, which came in the 2019 regular season. The Cougars haven’t lost a home game since the 2017 season.

“What better way to end a season,” said Briggs. “At their place when we feel like we owe them one.”

It’s safe to say the Blue Devils (7-0) are looking forward to Saturday night.

“We’re all super excited,” said Hale. “This is the dream that we’ve all been thinking about this since seventh grade when we strapped up for modified. I think we’ll be ready.”