Sign Up
Log In
Purchase a Subscription
You are the owner of this article.
Edit Article Add New Article
You have permission to edit this article.
Edit
Home
COVID-19: Back open for business
News
Sports
Obituaries
Opinion
Arts & Life
Calendar
Photo and Video
Ads
eEdition
More
Share This
1 of 11 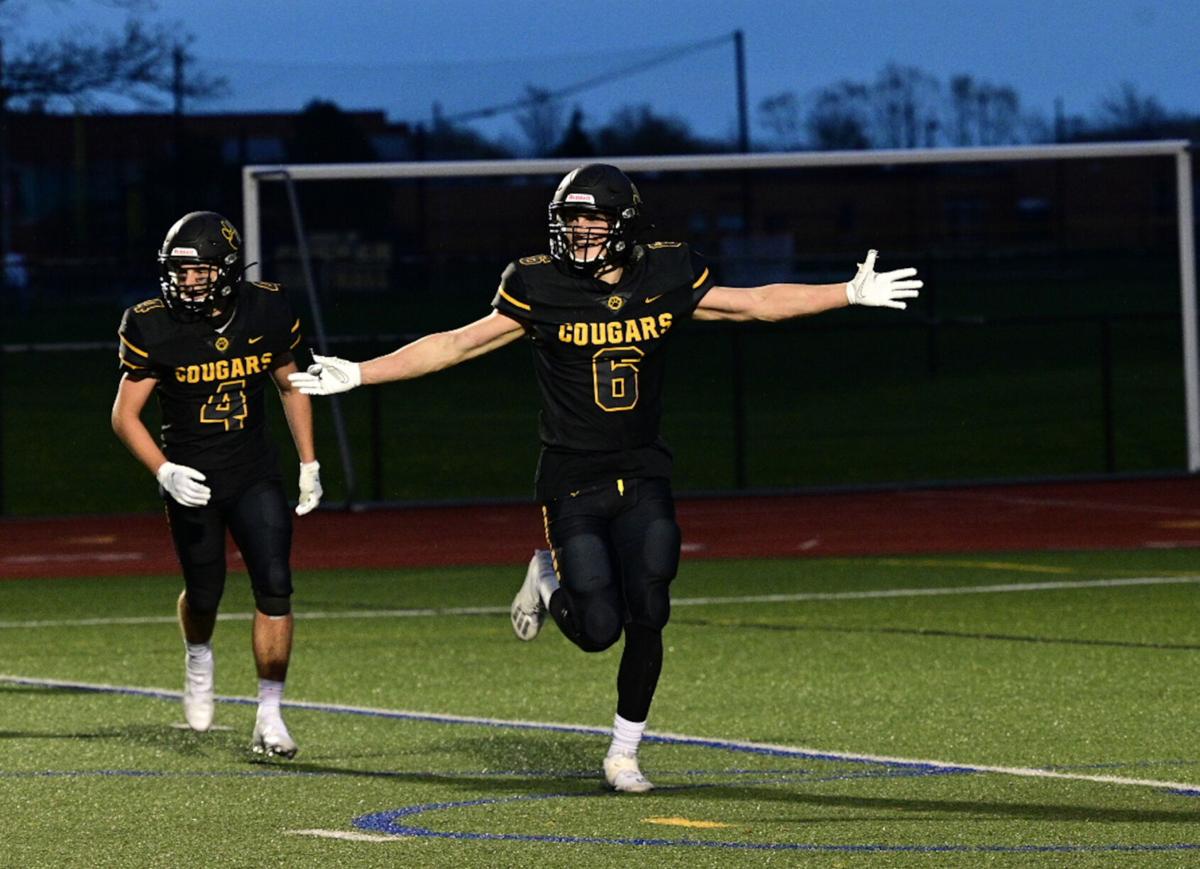 Lindsey Meys/For The Daily News | HF-L receiver Patrick Lustyk celebrates his touchdown near the end of the first half. 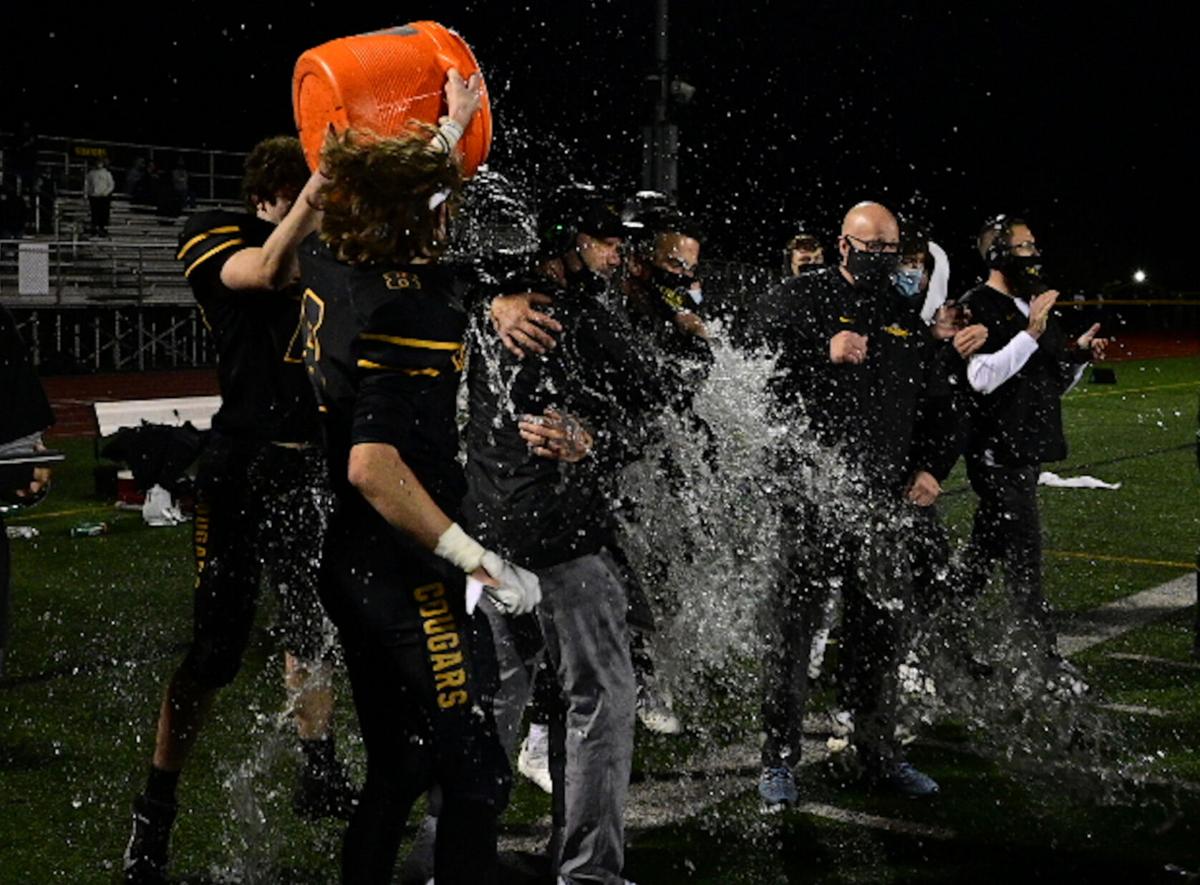 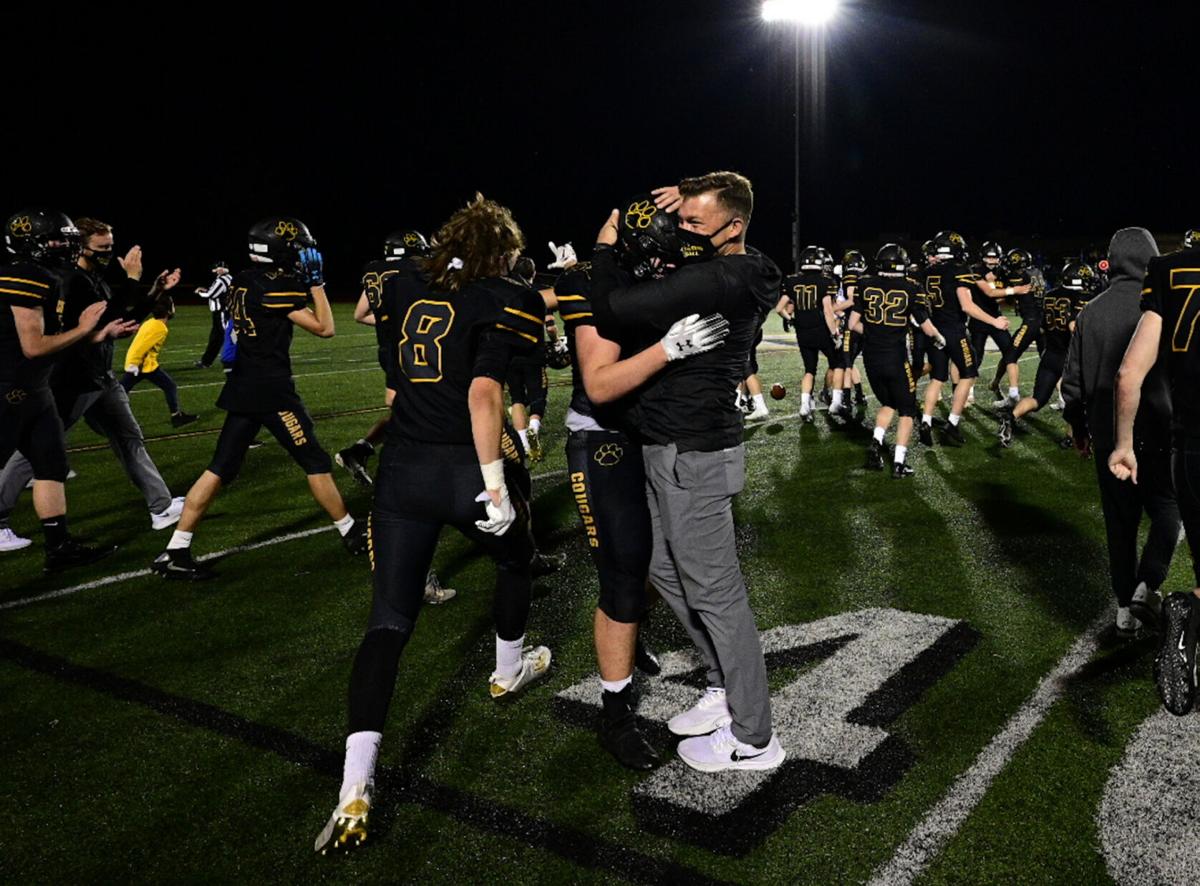 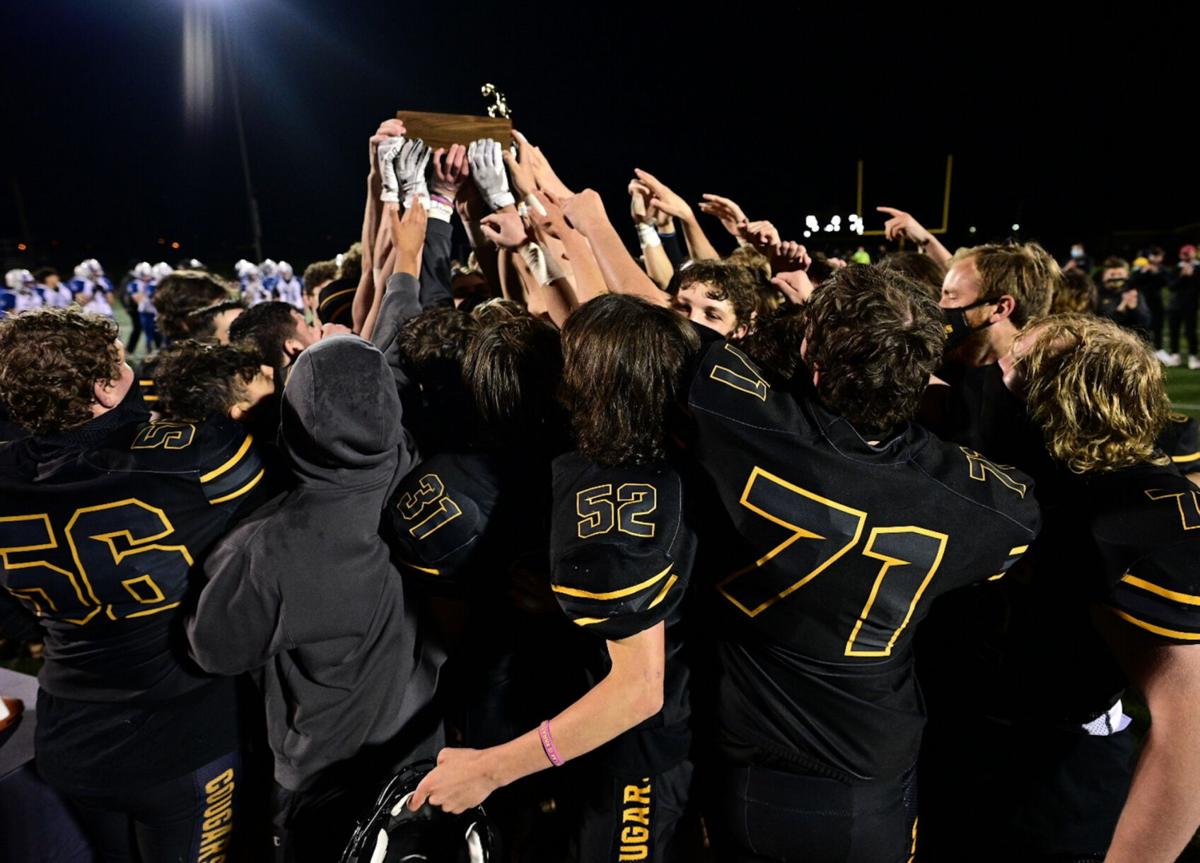 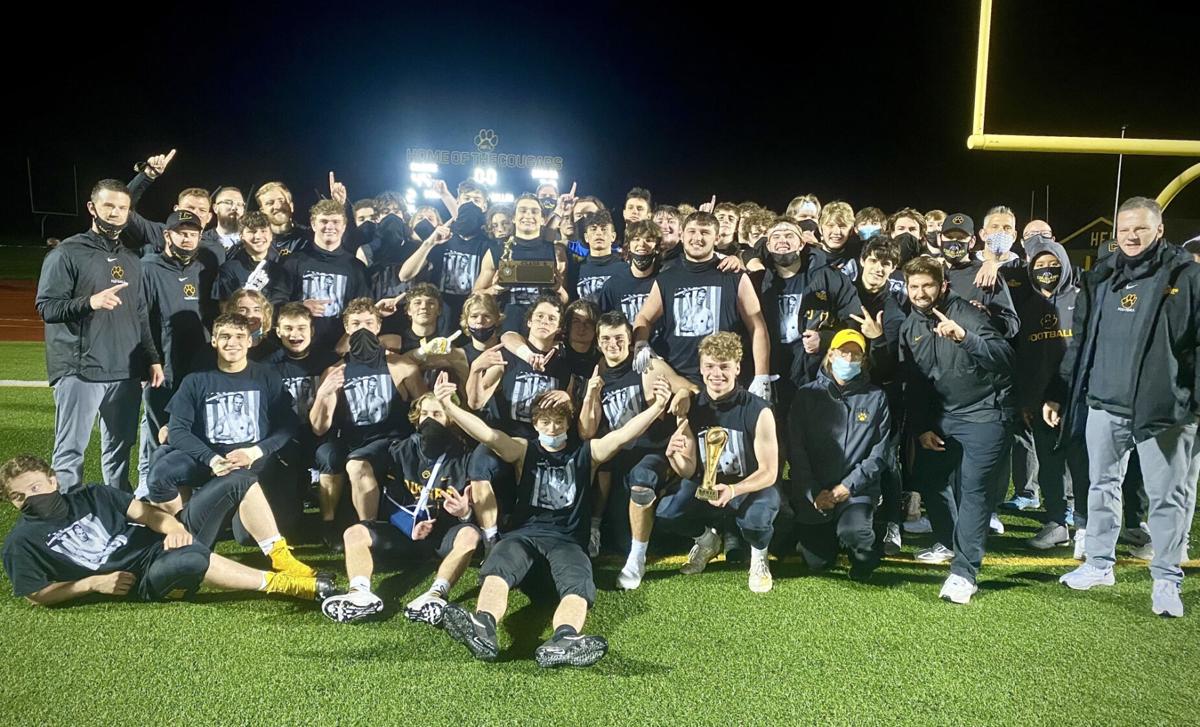 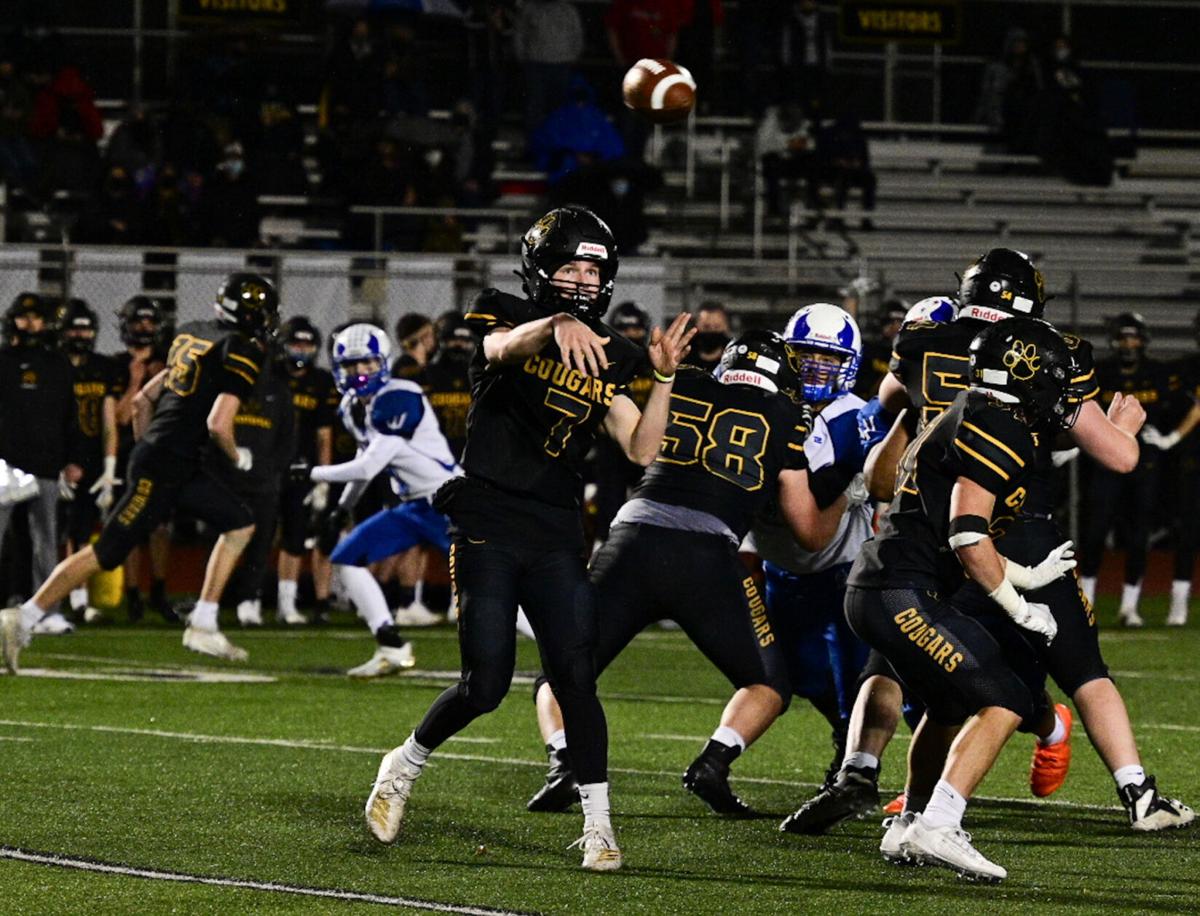 Lindsey Meys/For The Daily News | HF-L quarterback Reece Joint was awarded the MVP award for his performance in the Class B Final. 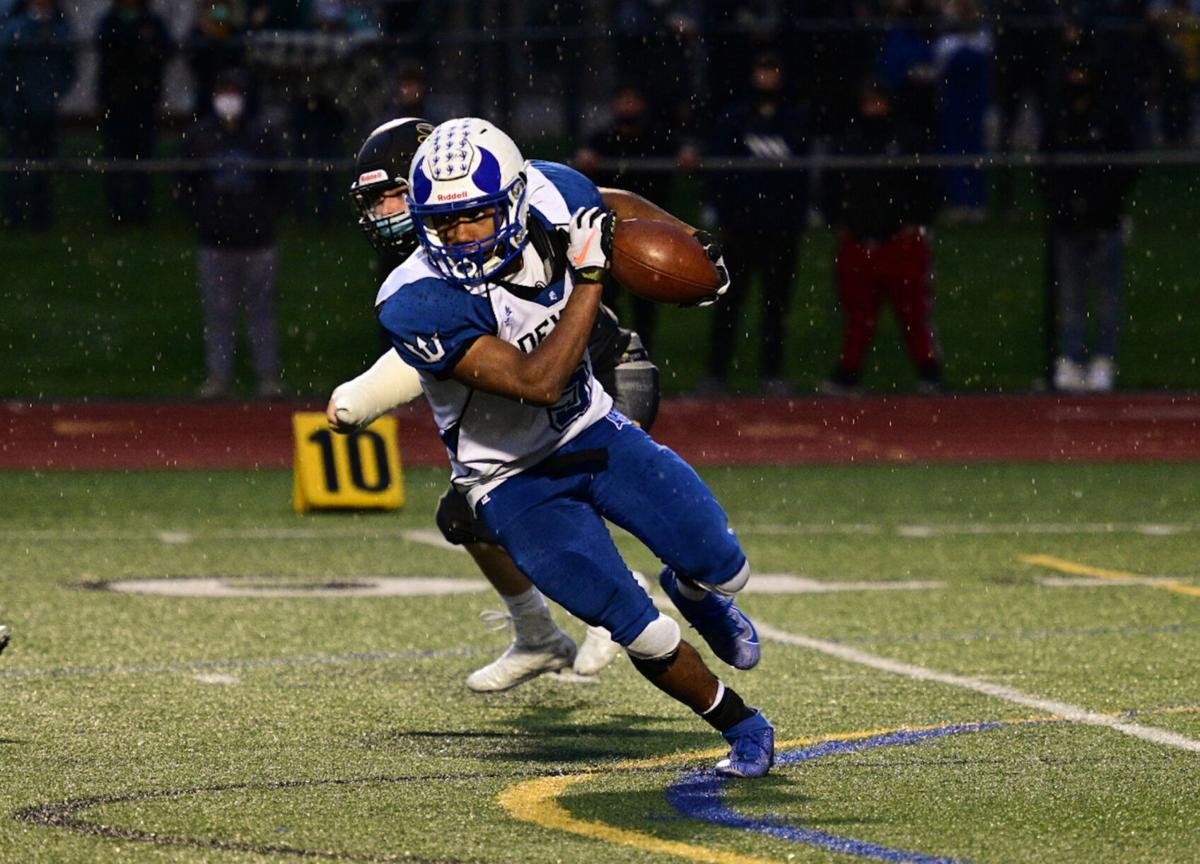 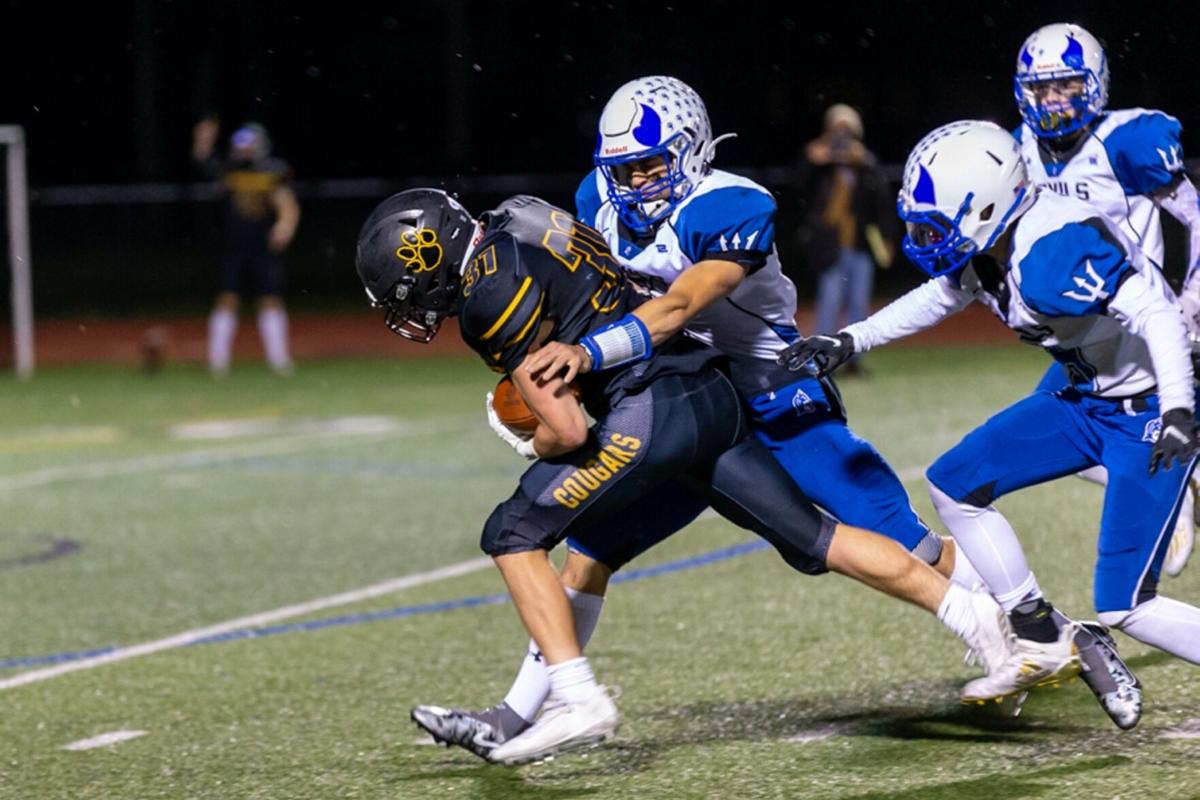 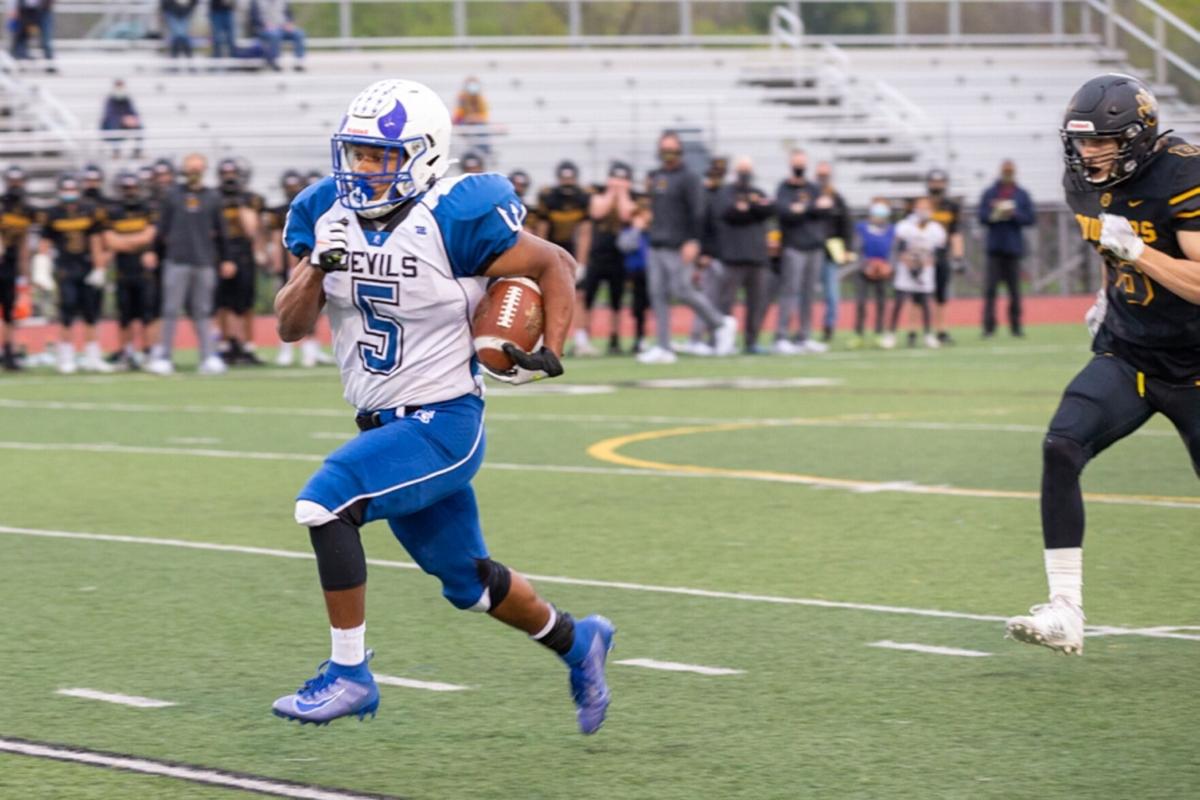 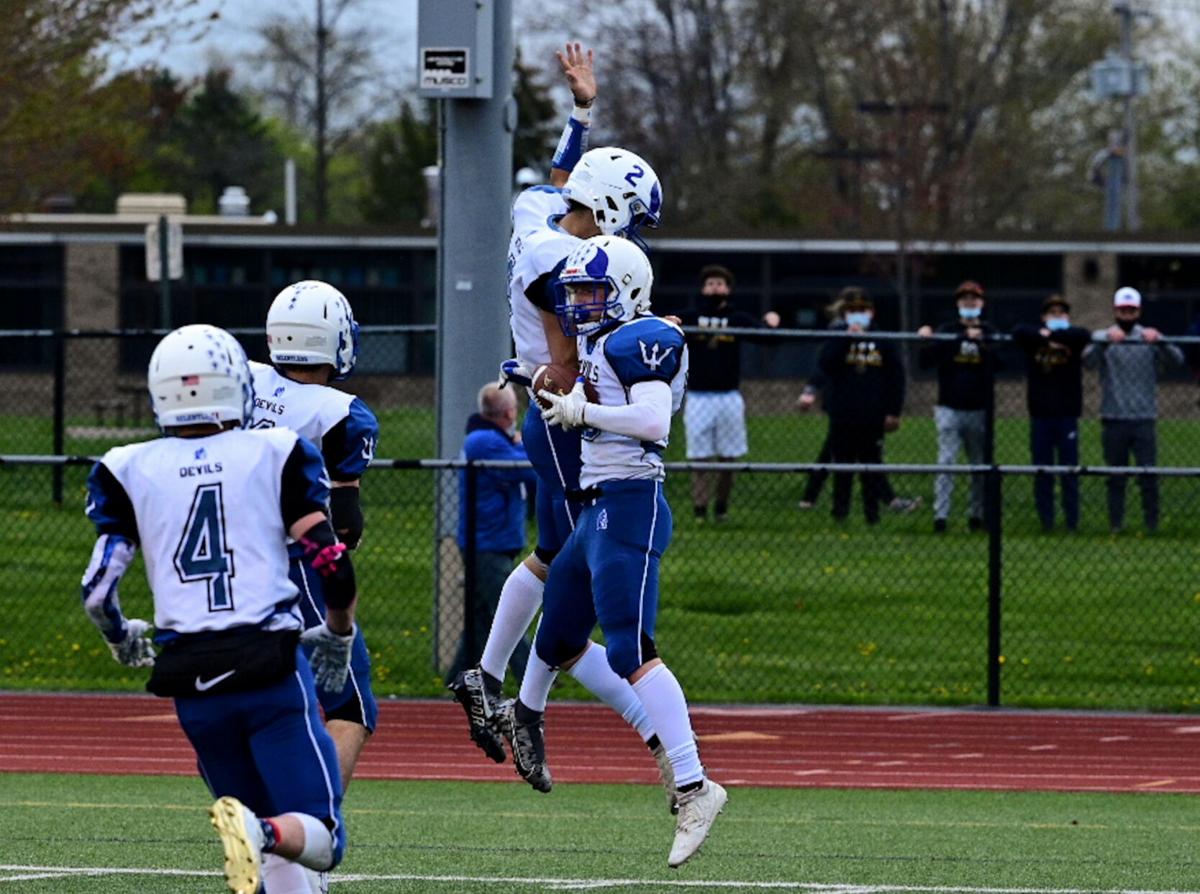 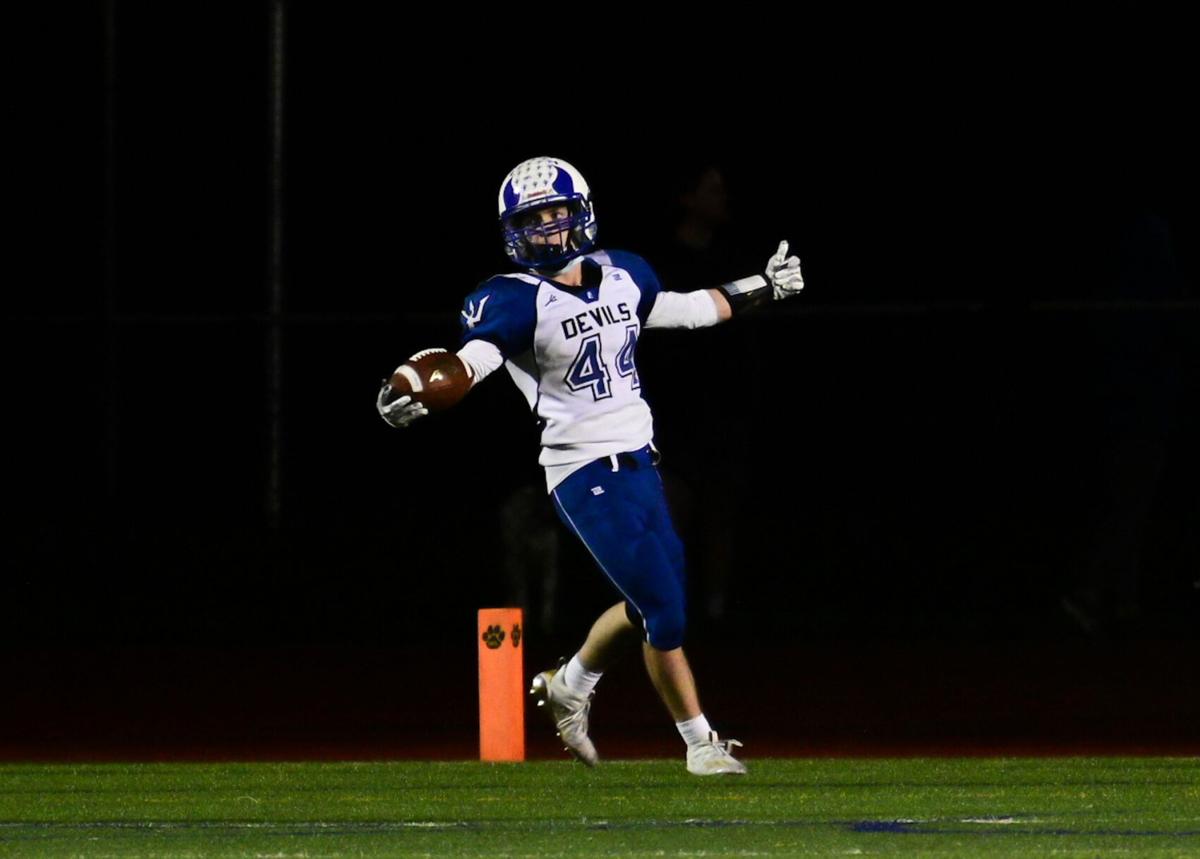 Lindsey Meys/For The Daily News | HF-L receiver Patrick Lustyk celebrates his touchdown near the end of the first half.

Lindsey Meys/For The Daily News | HF-L quarterback Reece Joint was awarded the MVP award for his performance in the Class B Final.

HONEOYE FALLS — A thrilling first half turned sour for No. 2 seeded Batavia in Saturday night’s Class B Final against host HF-L.

The Blue Devils battled the top-seeded Cougars tooth and nail for the first 23:50, but the final 10 seconds of the second quarter completely changed the game, which Batavia would go on to lose by the score of 49-28.

Facing a fourth and long with 10 seconds to play in the half and the score tied at 21, HF-L head coach John Russ called for his senior quarterback Reece Joint to take one more shot at the end zone. Joint took a shotgun snap, rolled to his left and heaved a desperation lob across his body about 40 yards in the air, creating a jump ball opportunity for his senior wide receiver Patrick Lustyk.

With the ball fluttering through the air, Lustyk leaped, juggled the ball, and came down with a contested catch between Batavia senior defensive backs Alex Hale and Tyle Budzinack and pushed his way across the goal line for the touchdown. As Lustyk reached pay dirt, the final seconds of the first half ticked off the clock. HF-L would go to the half with a 28-21 lead, which they would never relinquish.

“We’ve got to be able to knock that down,” said Batavia head coach Brennan Briggs. “The kid went up and made a nice catch. I think we were trying to keep him in bounds so they wouldn’t have had a chance at another play, and he just pulled us into the end zone.”

“That was tough,” said the Blue Devils’ head coach. “And then we had to kick off to them in the third quarter.”

Joint was awarded the MVP of the Class B Final, as the senior made countless big throws en route to his team’s win. But none were bigger than his connection with Lustyk to close the first half.

“Big-time,” said Coach Russ about how much that play turned the tide in the Cougars’ favor. “There is no doubt about it. Pat is a great athlete and he’s made plays like that all year for us. In terms of momentum going into halftime, I felt that was huge.”

Batavia struggled to contain the Cougars’ impressive multi-faceted offensive attack, as HF-L used Joint’s elite passing ability to set up senior running back Jacob Derby with plenty of open running lanes. Derby helped seal the deal in the second half with a couple of rushing scores, while Joint found sophomore WR Nolan Smith for a 20-yard TD pass with 8:14 to go in the game, which put the Cougars ahead 42-21 and placed the dagger in the hearts of the Blue Devils.

“We knew he could sling it,” said Briggs of HF-L’s Joint. “He’s a fantastic athlete. If you bring some pressure, he can avoid it, and he’s got some good receivers out there. He’s a very good football player. You have to tip your cap off to him.”

“I think about everybody that played on this football field that didn’t have the opportunity to have this feeling,” said Russ. “I’m so proud of these seniors. They put in so much work in such a crazy year. Our coaching staff, our parents, our community - everybody that supported us. I couldn’t be more proud for this entire community.”

Saturday’s game began with a Batavia touchdown on the opening drive. The Blue Devils drive stalled, but an illegal participation penalty on the part of the Cougars extended the drive and allowed Batavia to break the seal.

Terrez Smith scored the game’s first TD from 56 yards out on a run up the middle. Smith made a man miss in the hole and the rest was history, as a Carter Havens’ PAT put the Blue Devils ahead 7-0 with 9:30 remaining in the first.

Smith had a big first half but was slowed in the second half and eventually was ejected in the fourth quarter on what appeared to be a phantom targeting call.

Following Smith’s opening TD, the Cougars came right down the field and responded with a scoring drive of their own, as Joint found wide receiver Colt Green from 15 yards out to cut the HF-L deficit to 7-6 following a missed PAT.

Batavia mounted a long drive on their next possession, using a fourth down conversion to extend the drive and a highlight reel catch on a 3rd and long to cap it off with a TD.

On a 3rd and about 15, Batavia junior QB Jesse Reinhart escaped pressure and delivered a wobbly but accurate pass to the corner of the end zone where junior WR Evan Cummings was waiting to reel in a beautiful toe-tapping, falling catch. After another Havens PAT, it was 14-6 Batavia late in the first quarter.

The Cougars drove all the way inside the red zone on their next possession, but their drive was thwarted as a fake field goal attempt was unsuccessful and the Blue Devils took over on downs deep inside HF-L territory with 10 minutes to go in the half.

Batavia was forced to punt on its next drive, which allowed Joint and the Cougars to return serve and tie the game. The HF-L QB found Lustyk for a 20-yard score with 7:59 to go in the half, and following a successful two-point try, the game was tied at 14 apiece.

Batavia responded on its next possession as Reinhart completed a healthy drive with a 10-yard TD strike to Hale, who came streaking across the formation and was able to get free in the back corner of the end zone. With 4:58 to go in the half, it was 21-14, Batavia.

It didn’t take long for HF-L to respond, as the Cougars drove right down the field, and Derby punched in a 20-yard TD to help tie the score with 2:59 remaining in the second quarter.

Batavia punted on the ensuing possession, and then the late TD from Joint to Lustyk gave HF-L its first lead, which turned out to be for good.

“That’s a good football team over there,” said Briggs of HF-L. “I thought that we played an okay game to start, but then we started to get down (after the big play to end the half), and we started to make some mistakes. I could’ve done a better job coaching, and I’ll always take that. Maybe if I did a better job, it would have been a different outcome.”

For Briggs and his Blue Devils, it was their sixth appearance in the Section V Title game in his nine seasons as head coach.

“Hats off to HF-L,” said the Batavia head coach. “I’m proud of this group. They were resilient all year. To not think you’re going to have a season and to end up 7-1 isn’t the worst thing in the world.”

Batavia’s lone score in the second half came on an 80-yard run from sophomore RB Aidan Anderson.

For the Blue Devils, it was their first loss of the season, while HF-L wraps up the year unblemished.

“They just had the will,” said Russ about his group. “They were willing to come to practice three days a week in the fall when we didn’t know if we were going to play. They were willing to go into the weight room - after we went on COVID pause in the middle of the season, I made the weight room optional, and those kids continued to go. Just the willpower to deal with all of the stuff that we’ve dealt with, I couldn’t be more proud of them.”