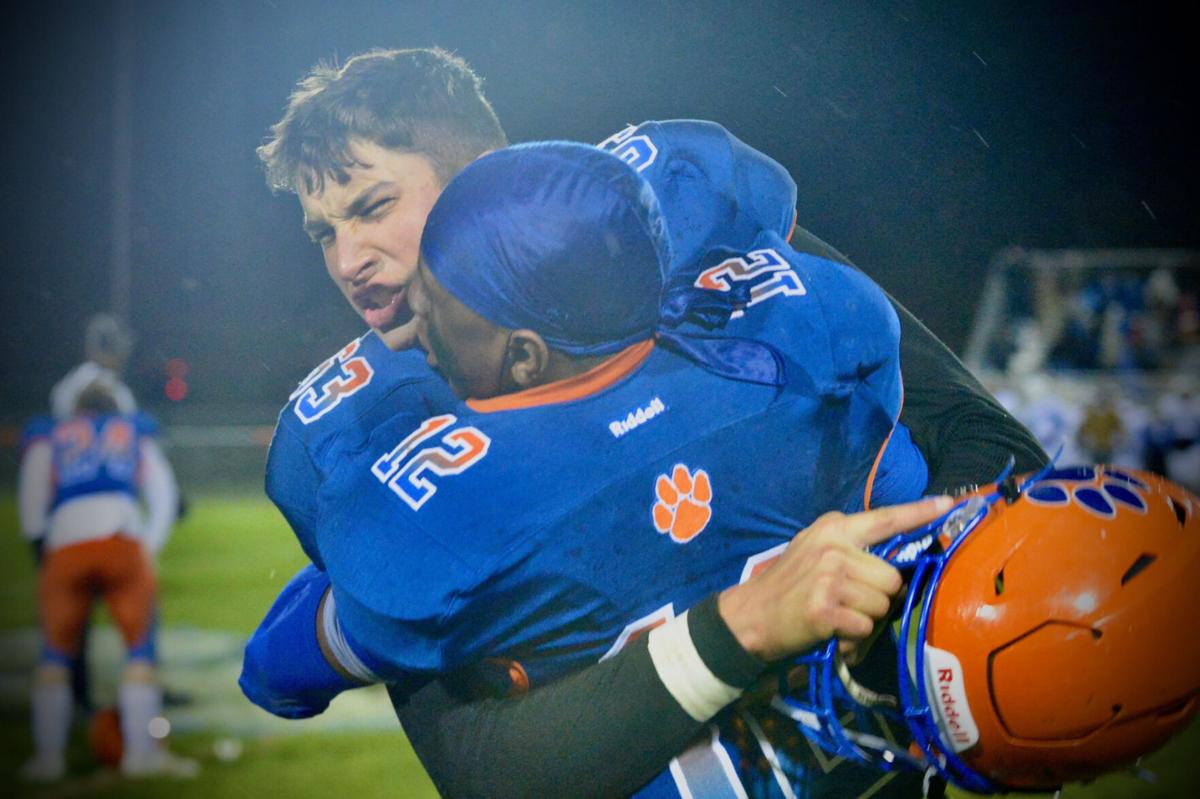 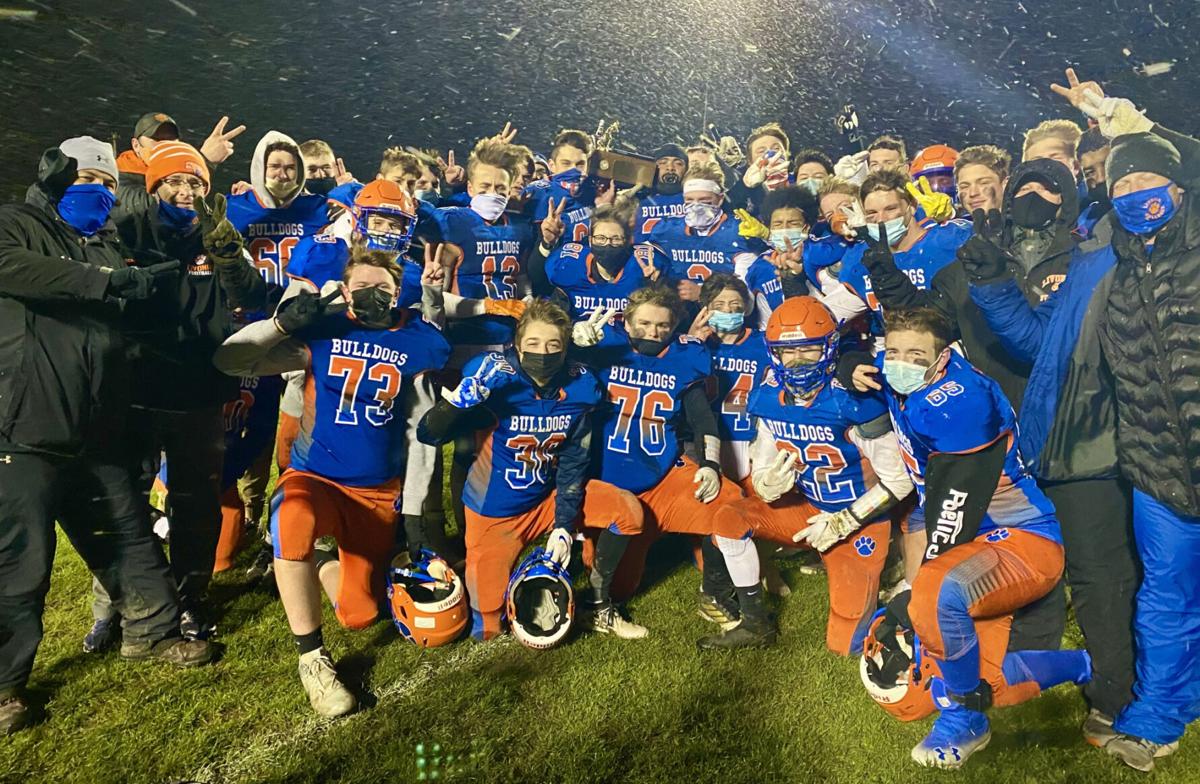 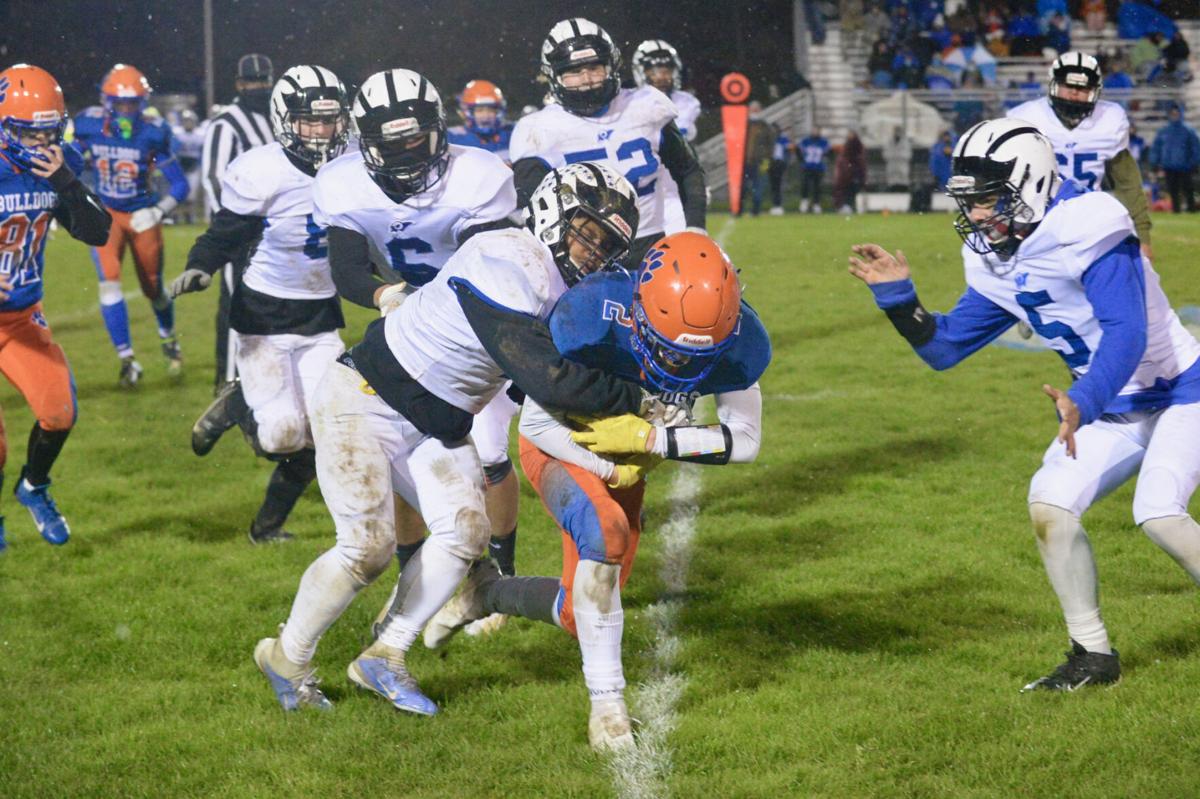 Alex Brasky/Batavia Daily News Livonia’s Jake Watkins carries the ball in the fourth quarter. Watkins finished the game with a forced fumble which occurred on the opening kickoff. He also recorded an interception. 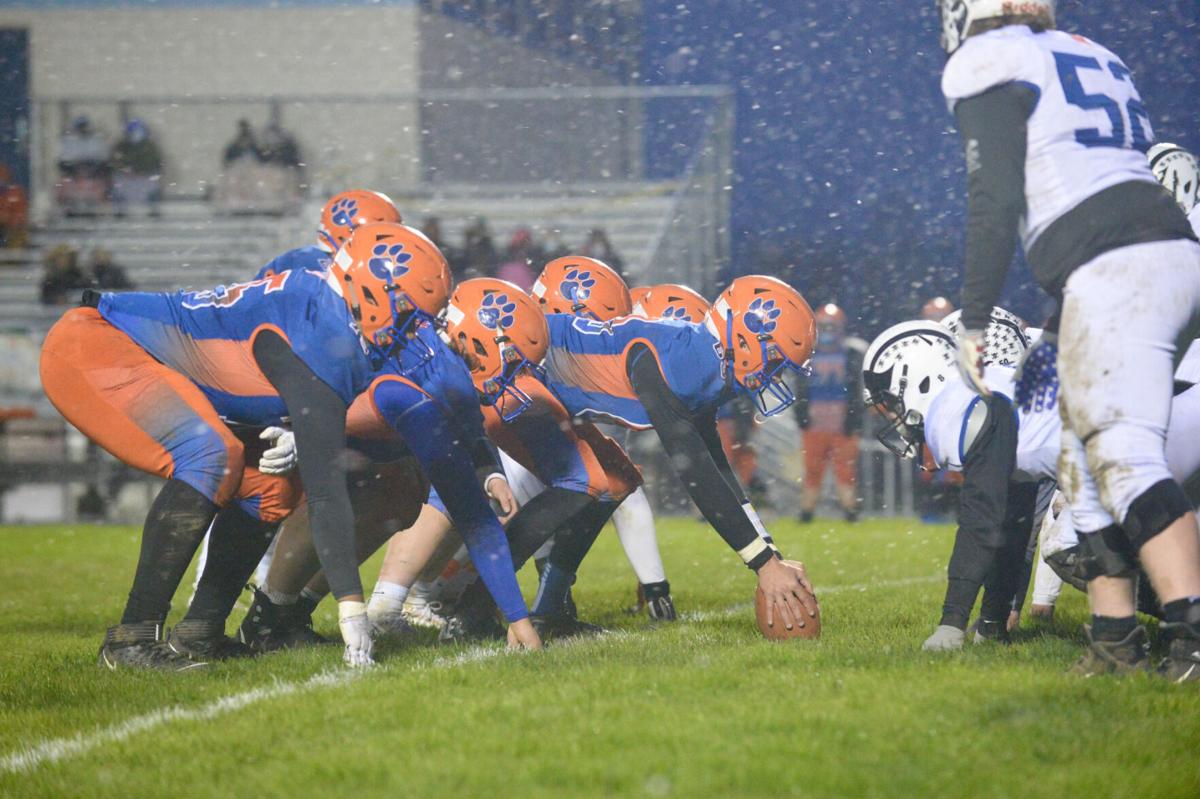 Alex Brasky/Batavia Daily News Livonia’s Jake Watkins carries the ball in the fourth quarter. Watkins finished the game with a forced fumble which occurred on the opening kickoff. He also recorded an interception.

LIVONIA — The defending champion Livonia Bulldogs were not going to be denied in Friday night’s Class C Championship game against fellow unbeaten, the Bath-Haverling Rams.

From pillar to post, the Bulldogs throttled the Rams, walking away with an easy, 44-0 victory to secure their second straight Section V Championship. The Bulldogs were Class B Champs last season.

“We had a lot of returning seniors that had a lot of experience playing last year through adversity,” said first-year Livonia head coach Chris Genthner. “And this year, the adversity, I think they were prepared for that.”

Senior quarterback Alex Minnehan played like a man possessed in the title game, finishing with 20 carries for 177 yards to go with three touchdowns and a fine effort defensively. Following the game, Minnehan gave much of the credit to his teammates, per usual.

“I don’t think I should be the one getting all the headlines,” said Minnehan. “Everything I do is because of those guys. Football is the ultimate team sport and I’m not running anywhere or doing anything without those guys. We play as a family out there. I owe everything I’ve done this year to coach and the work the guys have put in.”

The Bulldogs’ onslaught began on the opening kickoff, as junior Jake Watkins forced a Rams’ fumble, jarring the ball free from the hands of Bath-Haverling senior Brayden Hess. Livonia fell on the loose ball, and upon gaining possession just six seconds into the first quarter, it took the ‘Dogs just 48 more seconds to find the end zone for the game’s first score.

Senior quarterback Alex Minnehan finished a short drive with a 20-yard touchdown run up the middle, and following a successful two-point conversion, Livonia was out to an 8-0 lead with 11:06 remaining in the first.

The Rams proceeded to go three and out, and on their punt attempt the Bulldogs snuck in and blocked the kick. Senior lineman Shaun Wetterings snuck in to get a piece of the punt, which forced Rams punter A.J. Brotz to run the ball out of bounds at the B-H seven-yard line.

Two plays later, Minnehan found the end zone from five yards out to help give Livonia a 16-0 advantage with 7:54 still remaining in the first.

It took Livonia just four plays from scrimmage to amass a two-score advantage just 4:06 into the game.

On the ensuing Bath-Haverling drive, a huge pass play on 3rd and 8 from senior quarterback Ian DiDomineck to senior wide receiver Joshua Goodwin set the Rams up inside Bulldogs’ territory. But it was all for naught as the Livonia defense held firm as junior lineman Wyatte Gates came up with a sack on first down which was followed for a tackle for loss on second down and a sack from senior lineman Michael Bean on third down.

The three big defensive plays set up a 4th and 25 for Bath-Haverling, which elected for a fake punt that turned out unsuccessful. Livonia regained possession with 4:06 remaining in the first quarter and it didn’t take long for it to add to its lead.

With 1:03 remaining in the frame, senior tight end Stefan Gwyn took a direct snap on an end around 30 yards for the Bulldogs’ third score of the first half. Just like that, it was 24-0 Livonia.

“We’ve been practicing it all year, we just hadn’t ran it yet,” said Gwyn about his TD run. “Coach trusted me enough and we hit it. I got a good block on the outside and I was able (find the end zone.)”

The Bulldogs came through with some more highlights before the first quarter was through, as Minnehan created an interception on the Rams’ ensuing drive, tipping the ball up in the air to Watkins who came down with another big turnover and took the interception for a nice return.

“I just play my heart out every play,” said Watkins. “These seniors, it’s an honor to play with them and I just wanted to give it all I got.”

Livonia’s next drive failed despite going for nine plays and eating up nearly half of the second quarter. However, after turning the ball over to the Rams on downs with 7:40 to go until halftime, the Bulldogs came through with another turnover just seconds later. Junior defensive back Kevin Travis came away with an interception with 6:45 to go in the second which set up a 25-yard touchdown run from senior running back Jake Smith with 5:49 to go in the half.

The rout was officially on, with the score 30-0 in favor of the Bulldogs. Minnehan added a 35-yard touchdown scamper with :15 seconds remaining to push the advantage to 36-0 which put the game away before the halftime horn.

Bulldogs junior Kevin Travis scored another TD in the second half for good measure en route to helping Livonia finish the season a perfect 8-0 and with their second straight sectional ‘block’.

“We came in confident, we weren’t going to overlook Bath,“ said Livonia senior Jake Smith. “We knew we were confident coming in.”

With no state playoffs this season, Friday night was the end of the road for the Livonia seniors.

“I’m going to miss the atmosphere, the hometown (pride), everybody coming out to support,“ said Minnehan. “The family aspect of this team. There are a lot of guys on this team that I didn’t really know before the season and now I have brothers and a sister for life.”

Genthner will be sad to see this group go.

“It’s my first group of seniors, so I’m going to miss them a lot,” said Genthner, fighting back tears. “My daughter is a senior so I’ve known these guys for a really long time since they were little guys. I’ve seen them come up through the program and it’s just been an honor to coach this team.”

Two straight championships and two straight undefeated seasons. It’s safe to say the Bulldogs’ seniors left their mark on this program and Section V Football as a whole.

“We play for everybody that ever wore this helmet,“ added Genthner. “Anybody who ever played for Livonia football, we play for them. We honor them and we try to keep the tradition going that started 80 years ago. We play every game as Livonia Bulldogs. Once you’re a Bulldog you’re always a Bulldog.”