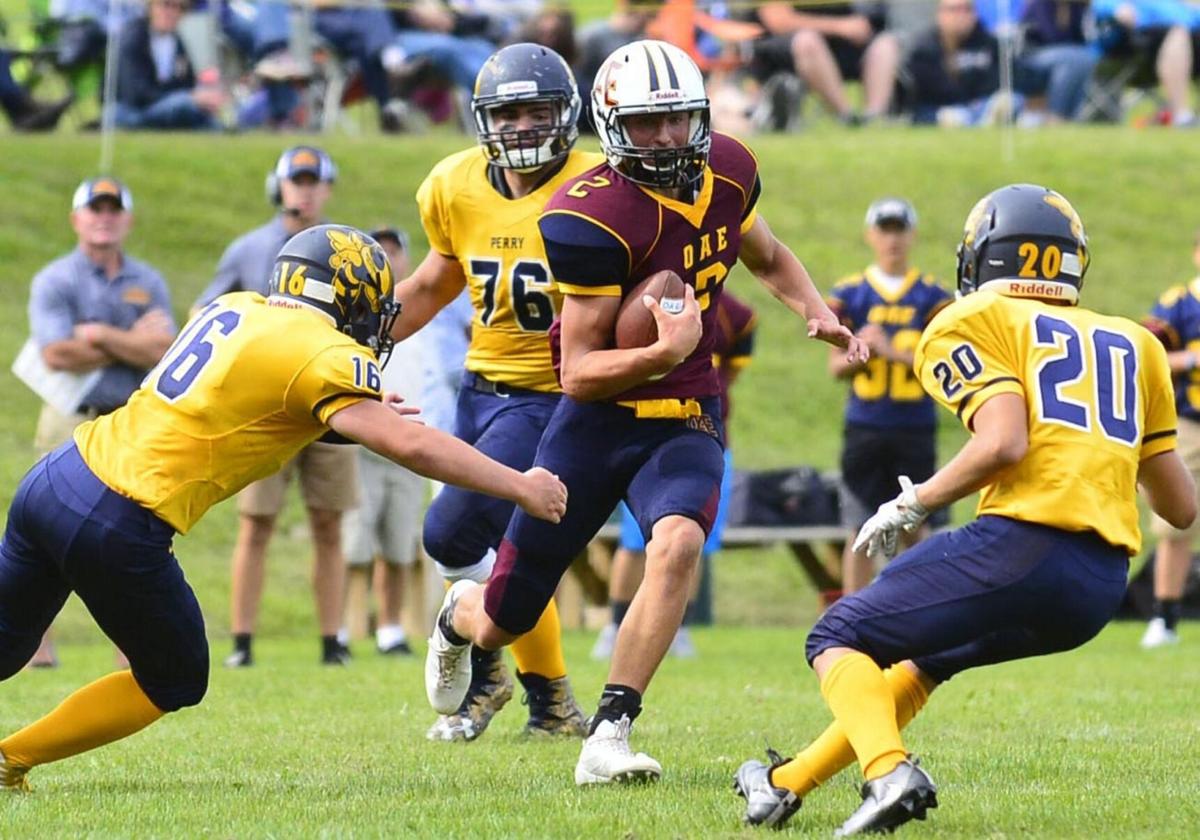 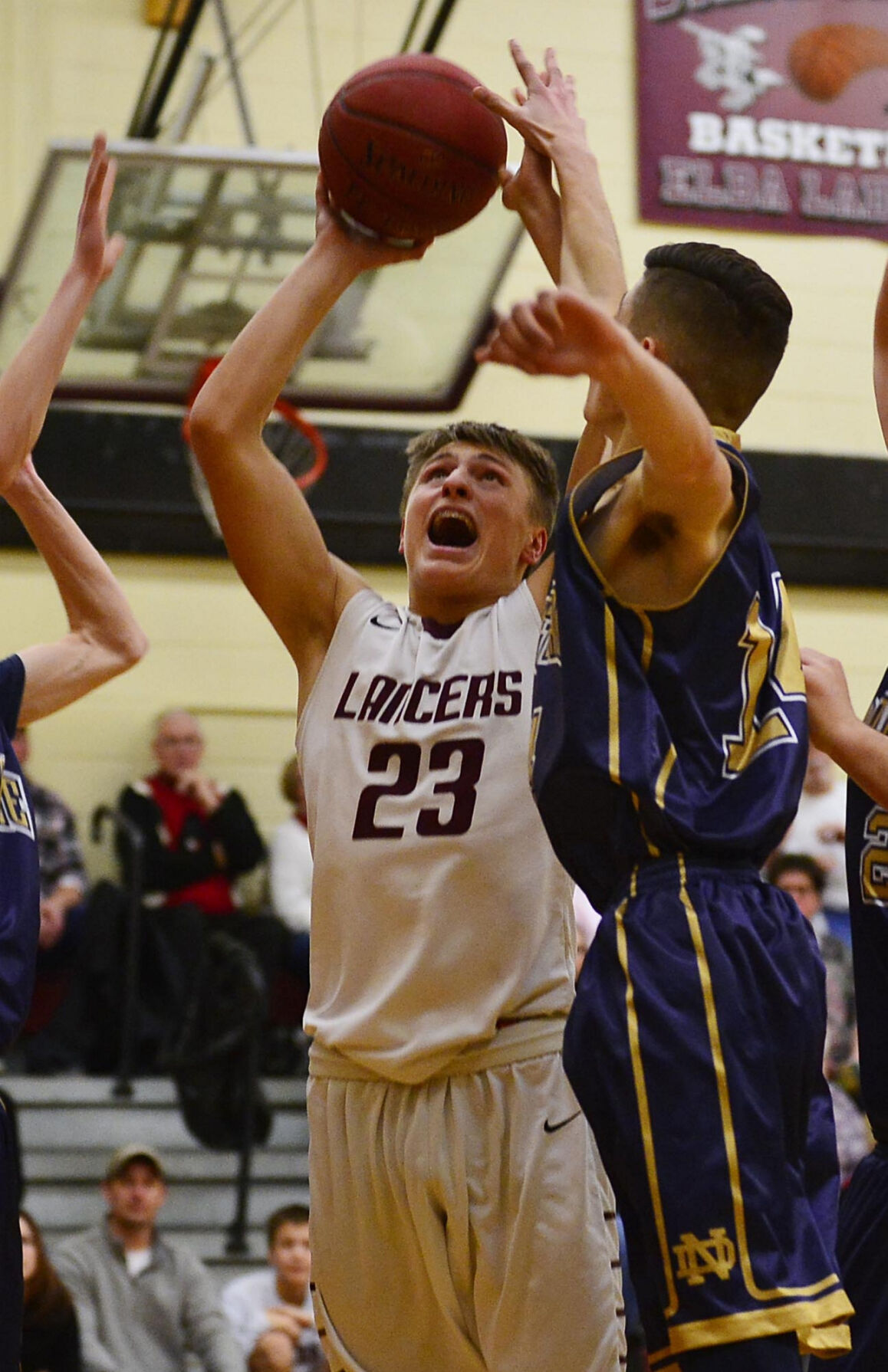 ELBA — For the last number of years, senior Colton Dillon certainly hasn’t been much of a secret coming out of Elba. A three-sport star in football, basketball and track and field, Dillon has more than made a name for himself in the lore of Lancers athletics.

Dillon was a terror on the Genesee Region League scene on the hardwood and on the track, while he also helped bring success to a new form of football to the Oakfield-Alabama/Elba program when they switched to 8-man football a few years back.

Despite that success, however, Dillon is feeling like a part of his high school memories have been taken away by the COVID-19 pandemic, though he is trying to roll with the punches.

“It’s been different. I guess I’m not getting the regular senior experience but there’s nothing you can do about it, we just have to keep doing what we’re doing and get through it,” Dillon said.

Probably known more for his prowess on the gridiron and the basketball court, Dillon still had a lot more he wanted to do this spring on the track.

A key member of the Section V Class C champion Oakfield-Alabama/Elba team of 2019, Dillon himself was a sectional patch winner and he was looking for more in his final high school sports season.

“It’s annoying because I feel like I could have gotten a couple more personal sectional patches and I was sure we were going to win as a team,” Dillon said. “And I was chasing our long jump record and I was getting close to that. But there’s nothing I can do, just take what I did in the past and just keep on going.”

On the football field, it is safe to say that Dillon and his teammates made sure that 8-man football was going to not only be a staple with Oakfield-Alabama/Elba, but also a rousing success.

In two years as a part of the ever-growing form of the sport, O-A/Elba was undefeated, winning a pair of sectional titles and doing so rather easily. And Dillon was a huge part of that.

This year Dillon was named the New York State 8-Man Player of the Year when he led the team to its second straight championship finishing this season with 60 carries for 984 rushing yards and 13 rushing touchdowns, 21-of-38 passing for 357 yards and five scores, and 32 tackles, seven for a loss, three sacks and a fumble recovery.

He is the back-to-back Section V Offensive Player of the Year.

Yet he still remembers what it was like learning that the program was making the change.

“What’s going on?” he thought. “I really didn’t know what to think but once I got used to it, it was still football, you’re still tackling, running like you would in 11-man. If you love football you’re going to play. I had my doubts at first but I was going to play.”

And the team more that succeeded, which made it even easier.

“It was really nice, especially this year,” Dillon said. “I remember getting new competition and Maple Grove coming in and everybody was hyping them up and I remember scoring on the first play and I was like ‘you’re playing my football now.’”

Former Oakfield-Alabama/Elba head coach Mike Cintorino, who stepped down following this season, had nothing but praise for his star quarterback.

“Colton is an exceptional young man,” Cintorino said. “His athleticism is what not just the 8-man football is all about, but football in general. He is what the game is predicated on today. Size, speed, athleticism, and toughness. On top of that, he was a wonderful person and good student.”

Onto the winter, and Dillon would continue to thrive.

A four-year varsity contributor, Dillon was named the Genesee Region League Player of the year when recorded 26 points and 14 rebounds per game during a monstrous senior season which saw the Lancers advance to the Class Dsectional championship game.

Dillon also passed the 1,000-point mark midway through the season and then with a 47-point, 23-rebound night in a win over Kendall he eclipsed the program record for most career points — breaking the old record of 1,240 held by Joe Bezon (Class of 1996).

“Colton was a competitor in the three seasons that I had him,” said Elba head coach Ciaci Zambito. “His senior season will surely be one that’ll go down as one of the more accomplished seasons Elba has had from one single player.”

What’s even more impressive is that even though Dillon was called up to the Class D sectional-winning team as a freshman, he also missed a good portion of his junior year due to an injury suffered during football. Thus, he broke the record in a little over two-and-a-half years.

Something that he still can’t quite grasp.

“It was crazy. At first I never thought I was going to break 1,000. But then me and my dad were talking when I was coming up on 1,000 and then next thing I knew I was coming up on the record and it was just amazing,” Dillon said. “No matter what I did I wanted to be the best at what I did, whether it was school, sports, football, basketball, track; I wanted to be the best.”

With all his success at Elba, obviously there were going to be college offers. And there were plenty.

Not only did Dillon receive multiple football and basketball looks, but he got numerous letters for track and field as well. In the end, he chose Mercyhurst to play football.

“It was tough. I had a lot of schools looking at me and I think once I hit state Player of the Year I started doing combines and the football camps and once I got actual offers for football I thought ‘this is it,’” Dillon said of choosing football. “I’ve always looked at it since I was a freshman and I knew I was going to be put in a tough position but my family and I talked about it and it was just the best for me.”

Not only will Dillon be continuing his football career, but he will be moving from his accustomed quarterback spot, where he has been since an eight-grader on varsity, to wide receiver when he moves on to the next level.

And Mercyhurst seemed to but just the right spot for everything to work.

“I was thinking Brockport and a couple other schools, I guess Mercyhurst fit me the best financially. The coaches were nice and I just really liked it there,” he said.

For now, Dillon is just trying to finish out his high school career in a way that no one ever would have thought that would have to.

It hasn’t been easy, but the humble Dillon has found a way to make the best of it.

“I’ve just been looking at the brighter side of things, honestly,” he said. “I could be all down because there’s no prom, there’s no school, there’s no track but you just have to look at what you’re doing next. For me it’s college, moving on and just getting better at what I do.”