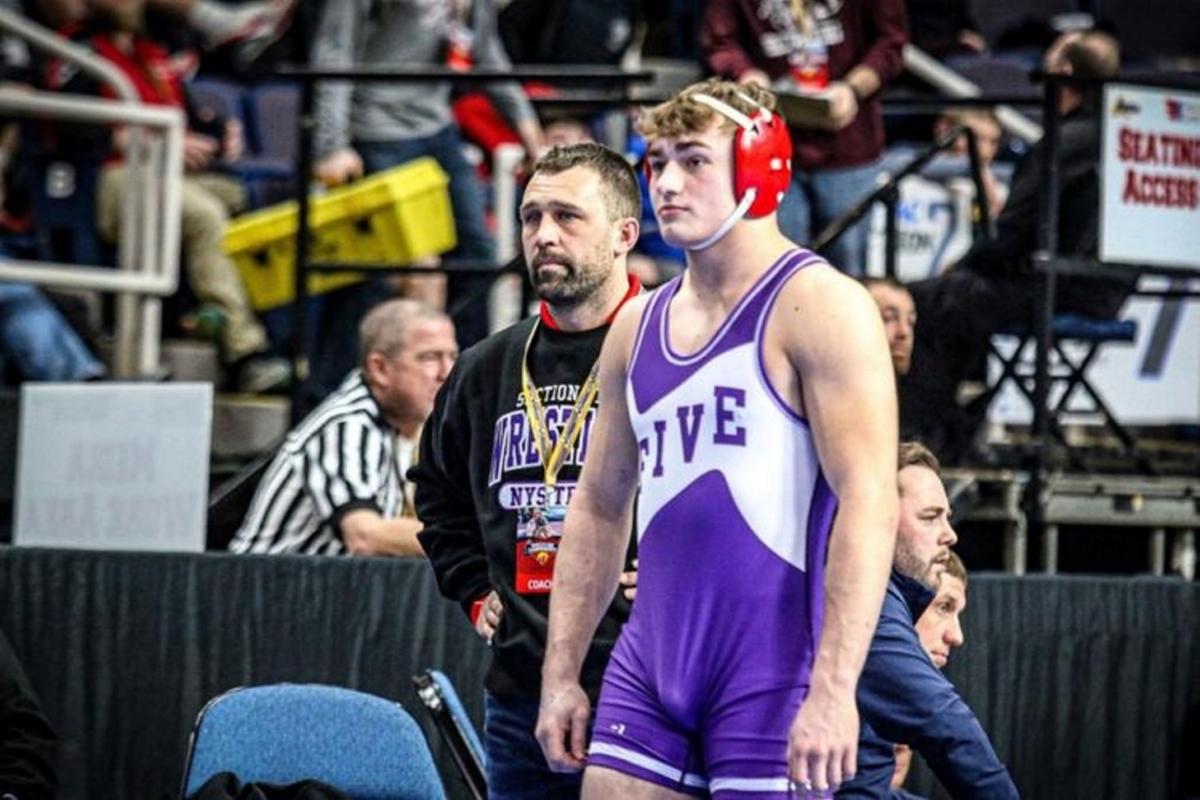 File photoWith head coach Zac Condidorio, Le Roy’s Andrew Englerth made a run to the semifinals at 160 pounds at the state meet. 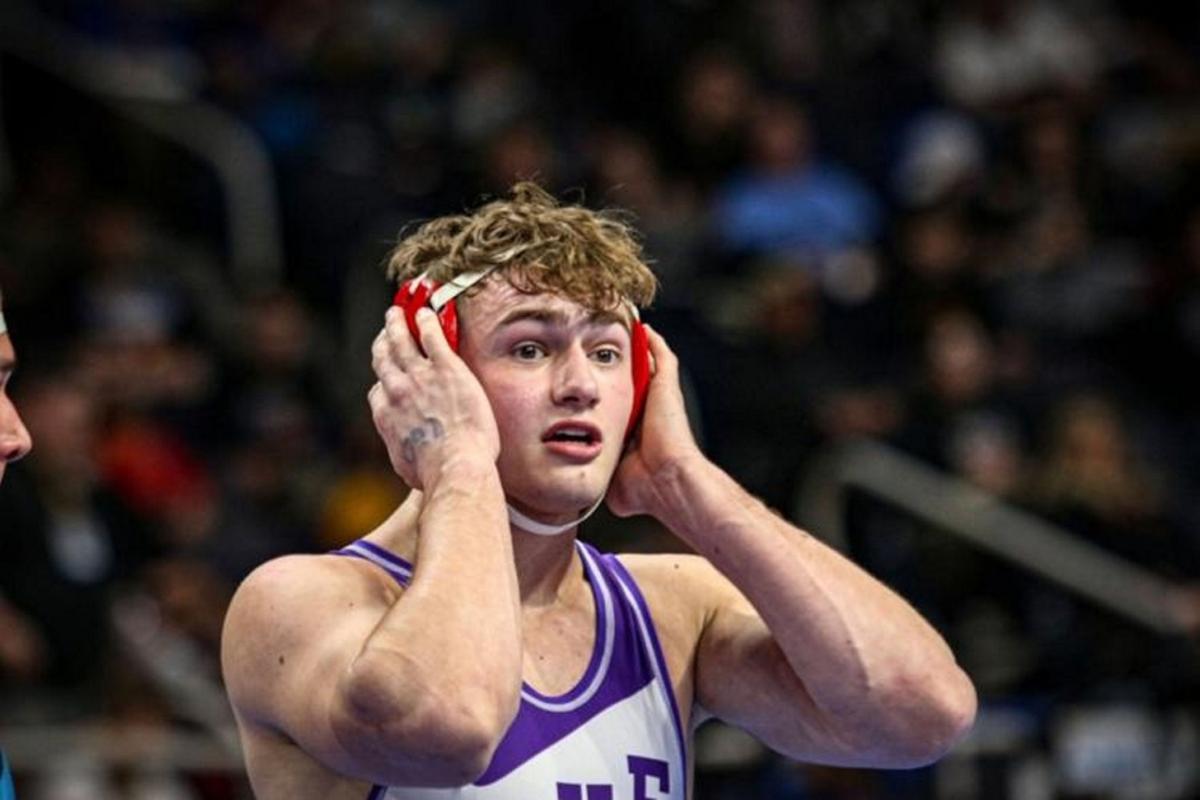 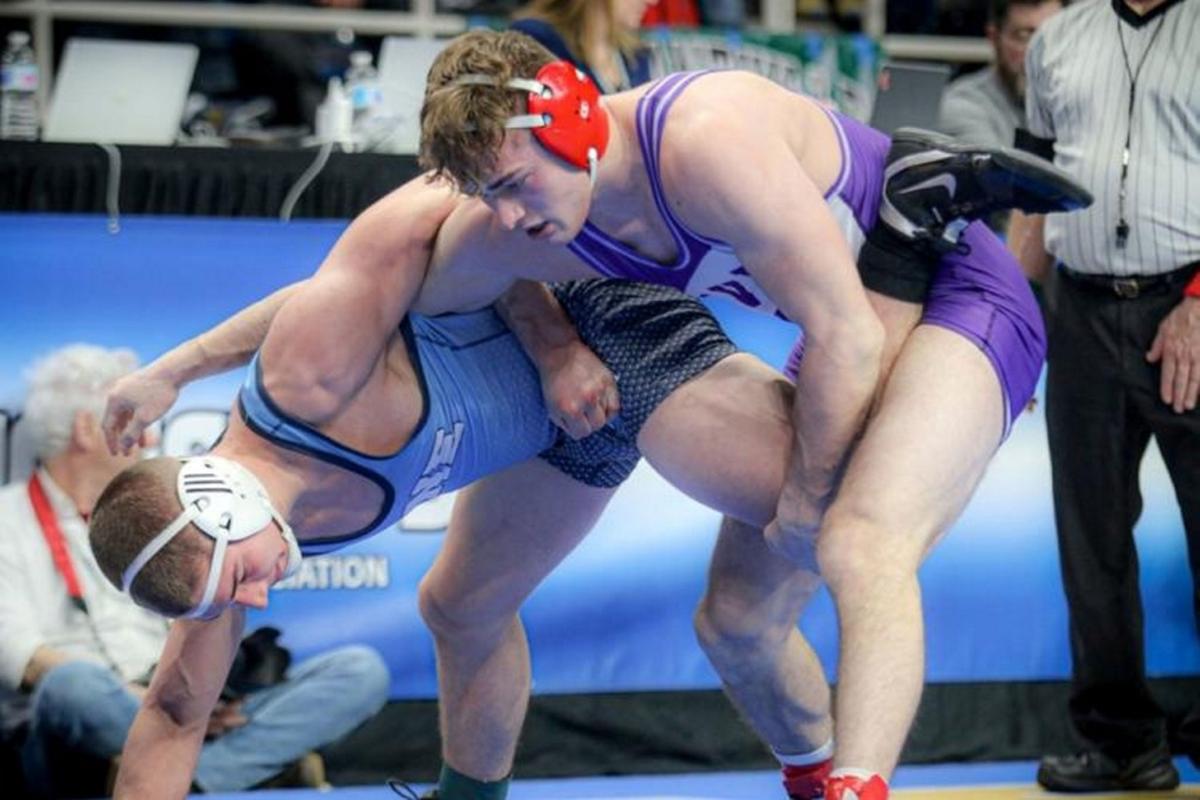 File photoLe Roy’s Andrew Englerth came in third at 160 pounds at this past season’s NYS wrestling tournament in Division II. 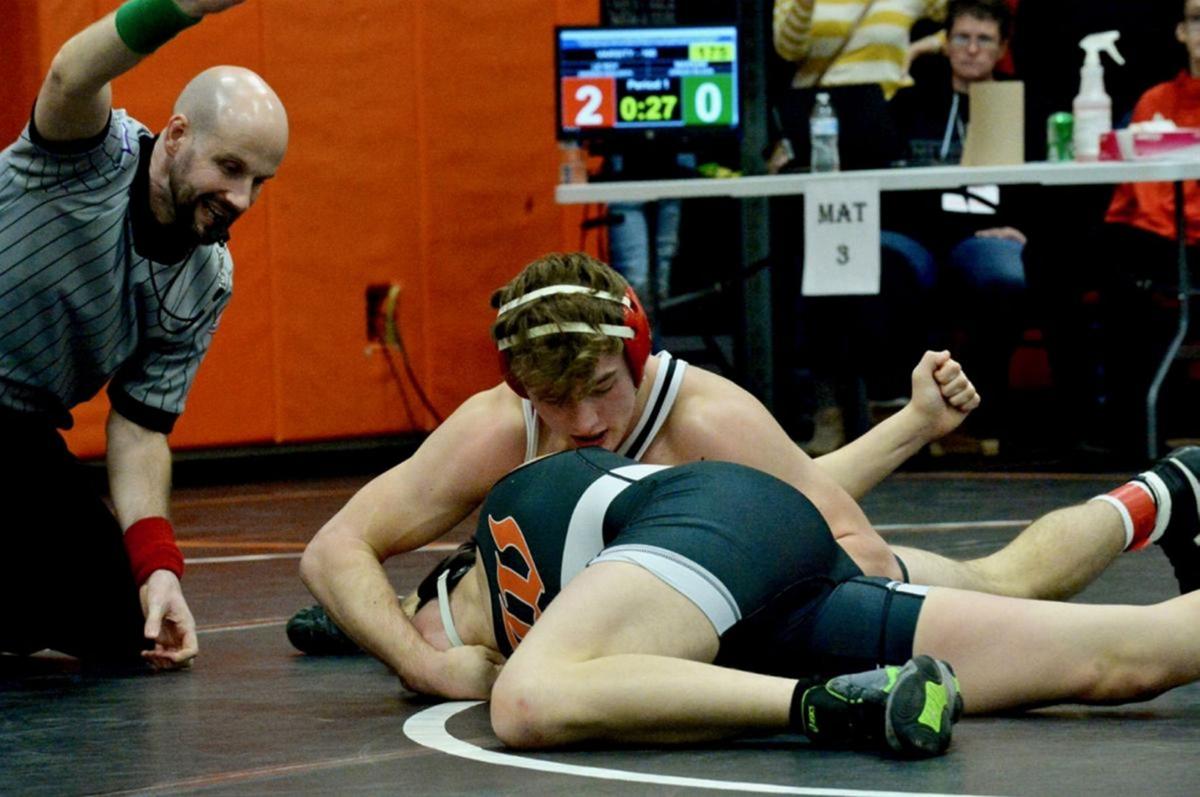 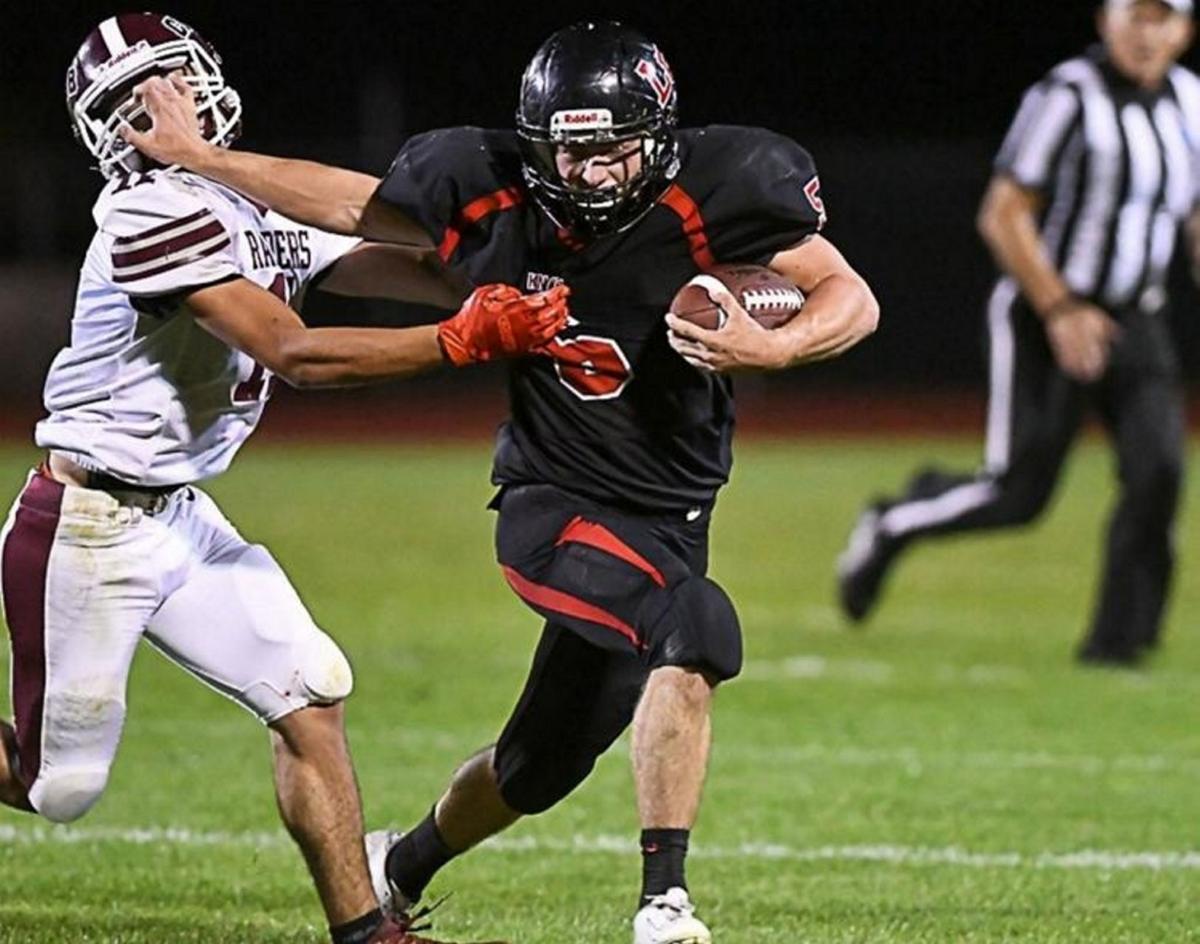 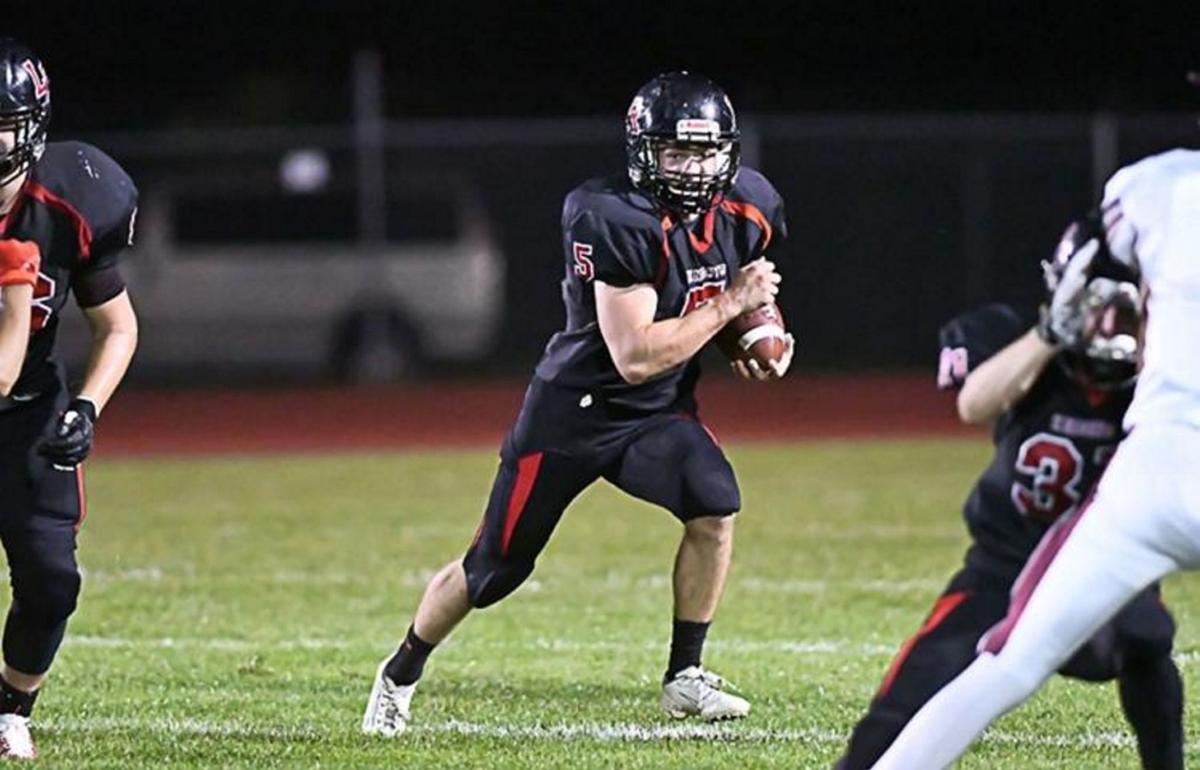 File photoAndrew Englerth led Le Roy on the ground with over 1,000 yards and 12 touchdowns in 2019.

File photoWith head coach Zac Condidorio, Le Roy’s Andrew Englerth made a run to the semifinals at 160 pounds at the state meet.

File photoLe Roy’s Andrew Englerth came in third at 160 pounds at this past season’s NYS wrestling tournament in Division II.

File photoAndrew Englerth led Le Roy on the ground with over 1,000 yards and 12 touchdowns in 2019.

LE ROY — Le Roy High School senior Andrew Englerth certainly decided to make the most of his final year as an Oatkan Knight, at least athletically. Having concentrated nearly solely on wrestling for much of his high school career, Englerth decided he was going to become a three-sport athlete to close out his tenure.

And while that didn’t come to fruition because of the COVID-19 pandemic, Englerth definitely made the most of his fall and winter seasons before seeing the spring taken away.

Having not played football in nearly six years, Englerth chose to come back to the gridiron this fall, where he shined in the backfield for the Oatkan Knights. And after another stellar season on the mats, culminating with a trip to the state tournament, Englerth was set to get back on the track this spring.

“I always played football until I was in seventh grade and all of my friends and family had wanted me to play ever since I stopped,” Englerth said. “I thought it was a good time to give it one last go. I did track when I was a sophomore and just thought I might as well try it out again since it was my last time.”

Next heading to SUNY Brockport to continue his fabulous wrestling career, Englerth absolutely capped his high school career in style.

At the Section V Class B2 tournament, Englerth was named Most Outstanding Wrestler honors as he captured the first title of his career, which coame after four previous losses in a sectional final match. Englerth entered the tournament as the top-seed at 160 pounds and walked his way to the title, pinning his first two opponents (0:50, 1:42) before dispatching Ryder Slayton of Canisteo-Greenwood in the final, 4-0.

At SuperSectionals, Englerth came away with the title at 160 pounds, whipping Marcus Whitman/Penn Yan’s Justin Smith by a 13-4 major decision in the final after pinning Josh Armstrong of Wayne (4:42) in the semifinal.

He would go on to advance to the Division II semifinals at 160 pounds at the state meet before he eventually fell to Jacob Null of Dolgeville, the title winner.

Englerth would rally after the loss to beat Gavin Kulp of Olean by a 11-3 major decision and win by a technical fall of Waverly’s (Section IV) Ethan Stotler 18-3 at 3:58 for third place in the state. Englerth came in seeded No. 5 and finished his senior year at 51-1.

However, with one season left to go in high school, Englerth never would have guessed how it would all come to an end.

“It’s quite upsetting since it happened to us and most likely only us,” he said. “I know many of my classmates that do spring track as their main sport were extremely disappointed. I couldn’t imagine what it would have been like to not wrestle, I’m just grateful that it happened when it did.”

In the fall, Englerth and head coach Brian Herdlein couldn’t have asked for much better from a kid who hadn’t played the game in over half of a decade.

Englerth stepped into the backfield and would earn at first-team Class C All-State selection — at linebacker — after he led the Oatkan Knights with over 1,000 yards rushing and 12 touchdowns, to go with 54 total tackles on the defensive end.

Le Roy would finish the season at 9-1, falling just one game short of yet another sectional title when the Oatkan Knights were ousted by Letchworth/Warsaw in the Class C title game.

Yet despite the disappointing ending in football and coming up just short of the first state wrestling title in Le Roy history, Englerth will relish his time wearing the red and black and playing for the Oatkan Knights.

“It’s given me so many opportunities to meet great friends and competitors from other schools, those who I would never meet if it weren’t for sports,” he said. “It meant the world to me being able to represent Le Roy on the field and the mat, I wouldn’t want to redo any of it.”

Being a kid who spent much of his youth on those aforementioned wrestling mats, there’s not much doubt as to which coaches meant the most to him throughout his career.

“All of my wrestling coaches, Zac Condidorio, Bob Gately and Randy Boyd,” Englerth said. “They all knew what I could accomplish and they never let me settle for less. Each one mentored me throughout all five years on varsity, I couldn’t have asked for a better three coaches.”

Englerth was a part of Le Roy’s Class CC champion track team in 2018 and now he will join a powerhouse wrestling program at SUNY Brockport.

Coached by the legendary Don Murray, Brockport’s wrestling program has built a winning tradition that continued in 2019 with its 56th consecutive winning season. For 50 of those years, Murray has been at the helm.