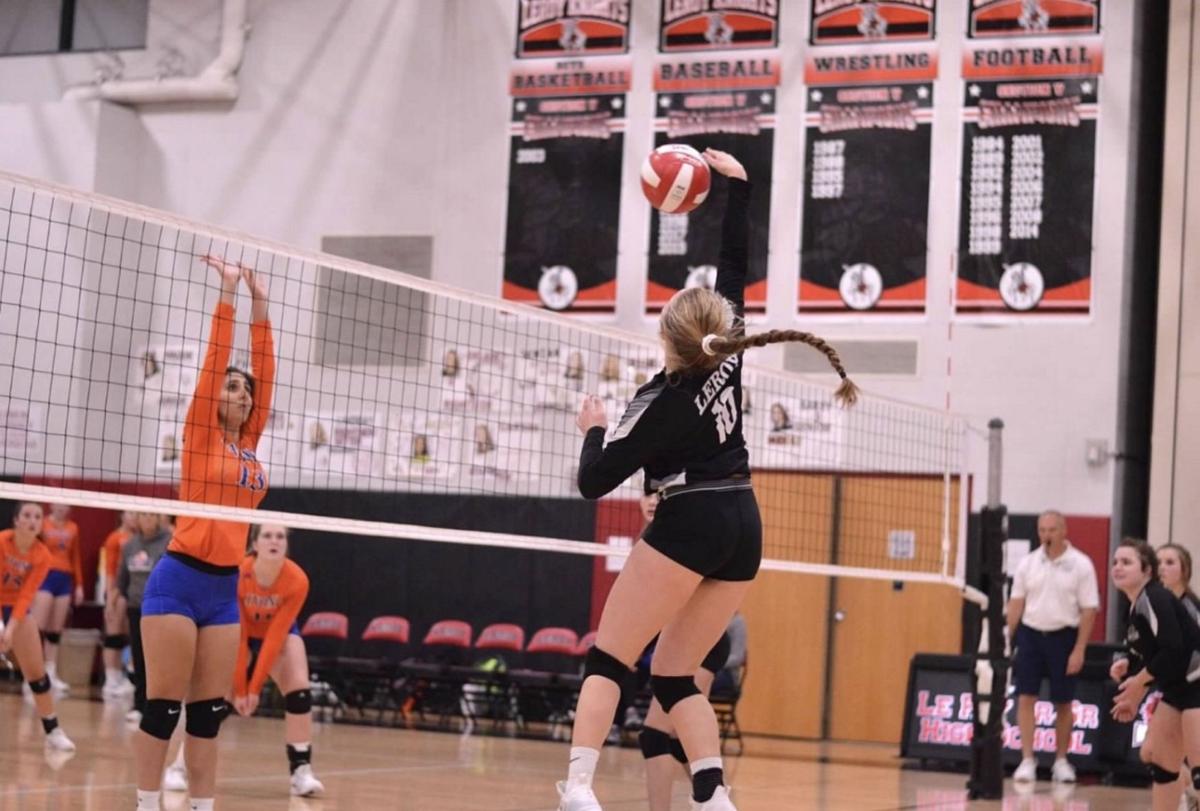 LE ROY — It has been a glorious run — on and off the athletic surface for Olivia Johnson.

The Le Roy senior is a three-sport athlete that competes in volleyball, softball and indoor track.

She has earned sectional championship patches in both volleyball and softball and was hoping to add to that count with another one this spring on the softball diamond for head coach Mike Battaglia, who offers high praise for his first baseman.

“Olivia is a great player, student, and role model for the younger girls in our program,” Battaglia said. “She is a leader in our building, as evidenced by her being a two-sport captain (volleyball and softball). She is respected by coaches and players alike. As a junior, shortly before the season, I told her we needed her to play first base, a new position for her. While she was nervous, she immediately showed the team-first attitude she is known for and worked hard to be the best she could be. She went out that weekend with her parents and got a first baseman’s mitt, and spent extra time with me in practice so she could quickly get ready to play there. She struggled early in the season, and I wondered if I was putting too much on her, asking her to learn a new position and bat fourth in the lineup in her first full varsity season. Once she got going she became one of our top players.”

“I think the one thing that will always stand out to me about Olivia is that she always seemed happier for the success of her teammates than she was for her own,” Coach Battaglia said. “When her sister Hailey, a freshman, hit her first home run for us last spring, I don’t think I ever saw Olivia smile so much. That attitude will be something that takes her far in life.”

Olivia, like all of her softball teammates, were focused on a big season this spring, but instead will miss the opportunity to play for the same sectional block they won in 2018 because of the cancellation of spring sports due to COVID-19.

“It’s extremely disappointing,” Olivia said. “I’m not even sure my mind has completely processed that it’s over yet. The team had so much potential and everyone was looking forward to the season, we were ready to go after it this year.”

In volleyball, Olivia played three full years of varsity and was also called up as a freshman.

She earned both LCAA All-Star and Exceptional Seniors honors this past fall.

Off the court Olivia is a terrific student and has been on the high honor roll her entire high school career along with being on National Honor Society as well.

Olivia has enjoyed many great moments and memories competing for the Lady Knights.

“Some of the most memorable moments playing sports at Le Roy were definitely during the sectional seasons,” she said. “My sophomore year of volleyball I remember winning sectionals and then winning the crossover game against Byron Bergen, and literally nothing is like the adrenaline rush you get when you play a game like that with a huge crowd. The whole softball season last year was so memorable too as the team was so bonded and the season was so fun.”

Olivia was very thankful for all the support she received from her coaches along the way.

“I think all of my coaches have made an impact on my athletic career one way or another,” Olivia said. “The major ones were Coach Tyler for volleyball and Coach Baggs for softball. Coach Tyler would always push you to be the best you could, and taught mental toughness, which is so important to the sport. Coach Tyler, along with her husband and Coach Sherman, built an amazing program. Coach Baggs has always been more than a coach to everyone, looking out for us all year round. He is the one that worked with me while I was learning a newer position, and would always offer support. His passion for coaching has always been admirable to me.”

Olivia’s post high school plan has her attending St. John Fisher College to some day become a registered nurse, and then later go back to school to become a nurse practitioner.

“I may also play a sport there, whether it be for the main team or a club one,” Olivia says.

But, before she leaves Le Roy HS for good, she reflected on the joys of wearing the Knights’ jersey.

“Playing sports for Le Roy really has been incredible,” Olivia said. “Nothing beats the feeling of putting your jersey on for game day and representing your school. Playing sports throughout the years has taught me so much and I’ve made so many bonds because of it. I’ll forever be grateful to the athletic program at Le Roy, along with my coaches and teammates, as they’ve given me memories I’ll never forget. Playing for Le Roy has been an honor.”