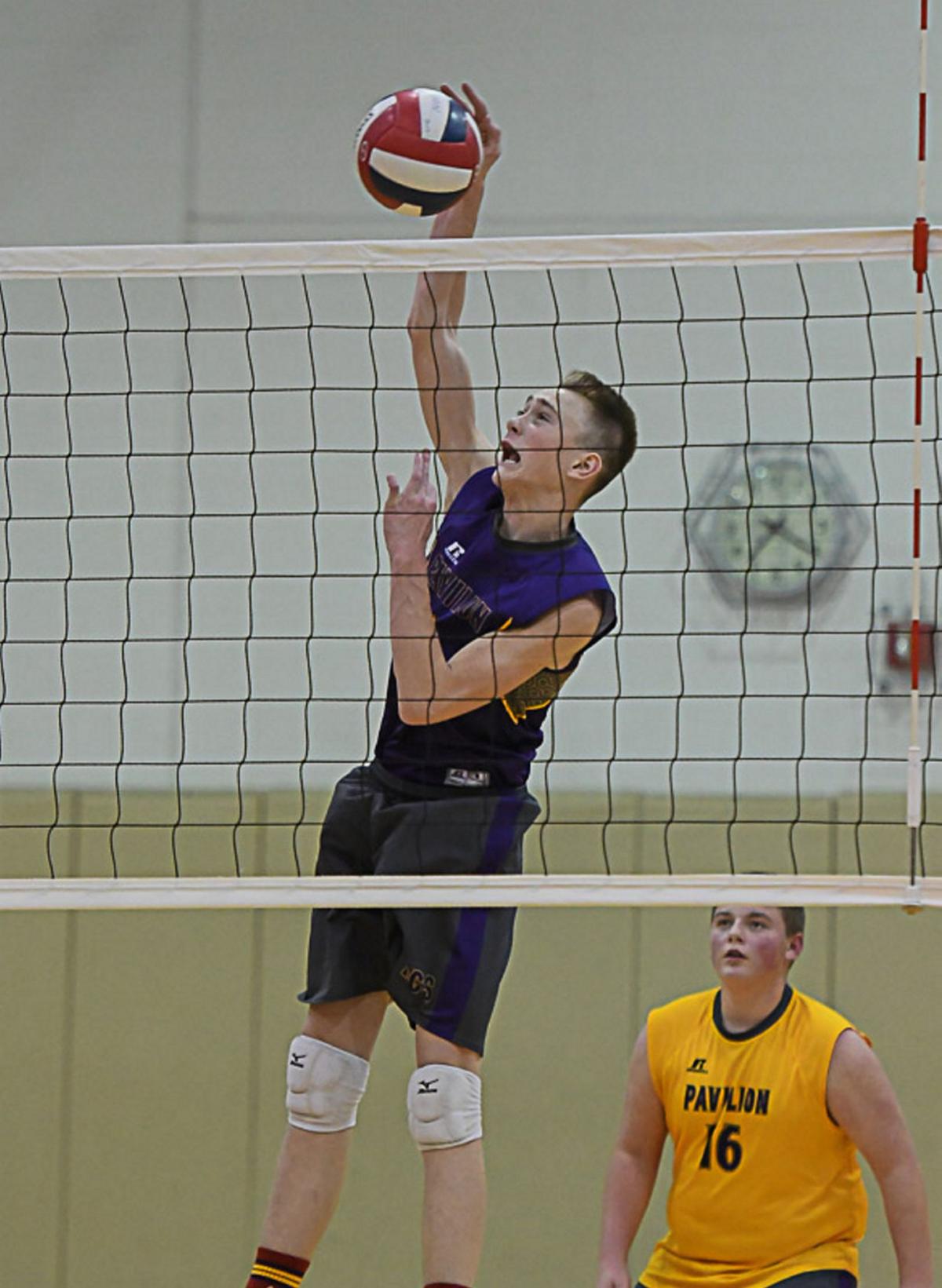 Photo by Doug McFarlandEven as an up and coming freshman, Pavilion’s Cameron Milligan showed the opposition that he meant all buisiness on the volleyball court. Four years later Milligan will be playing college volleyball this coming fall at D-II Daemen College in Buffalo. 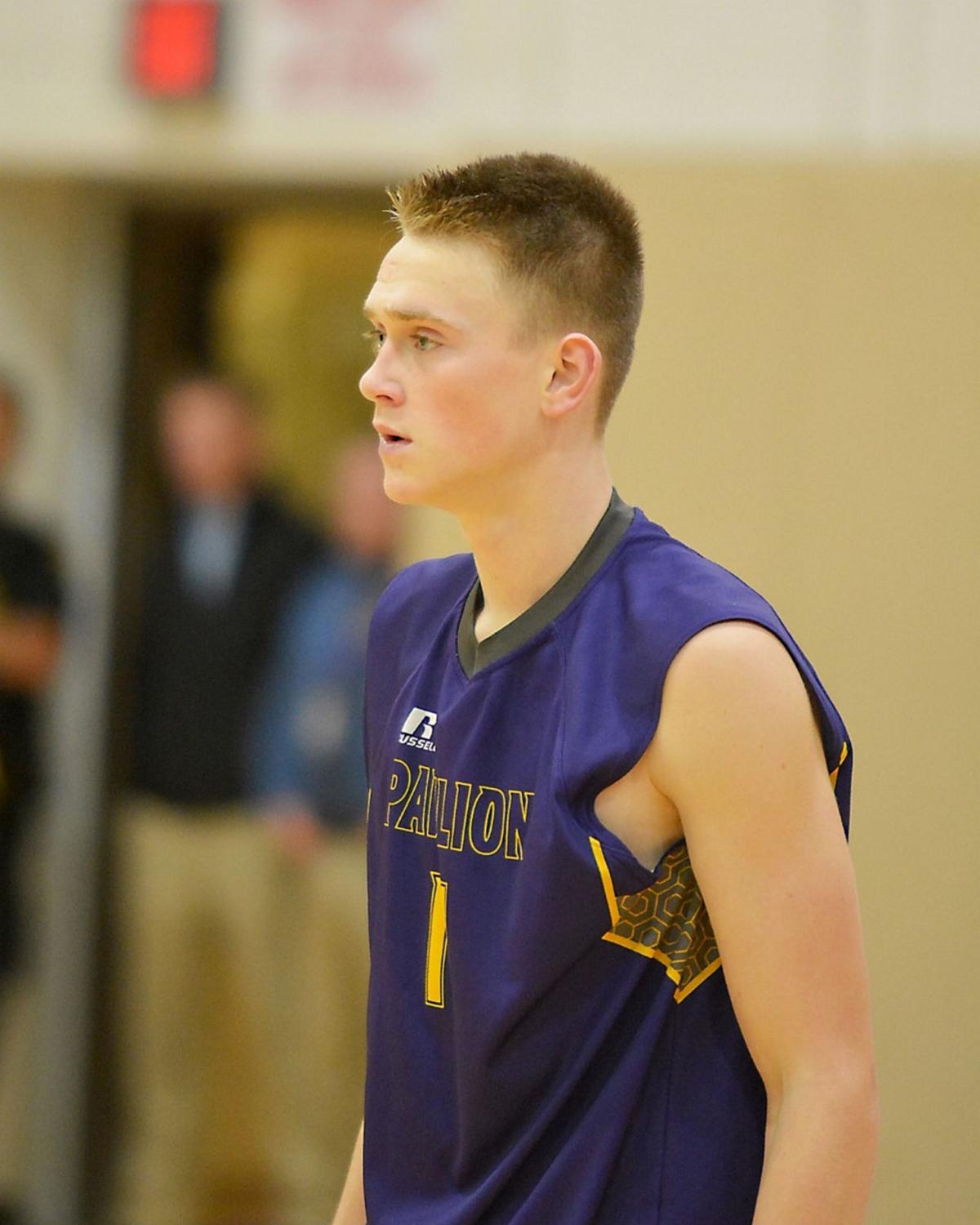 Provided Pavilion senior Cameron Milligan was a three-sport standout for the Golden Gophers and will be heading to D-II Daemen College this fall to play volleyball. 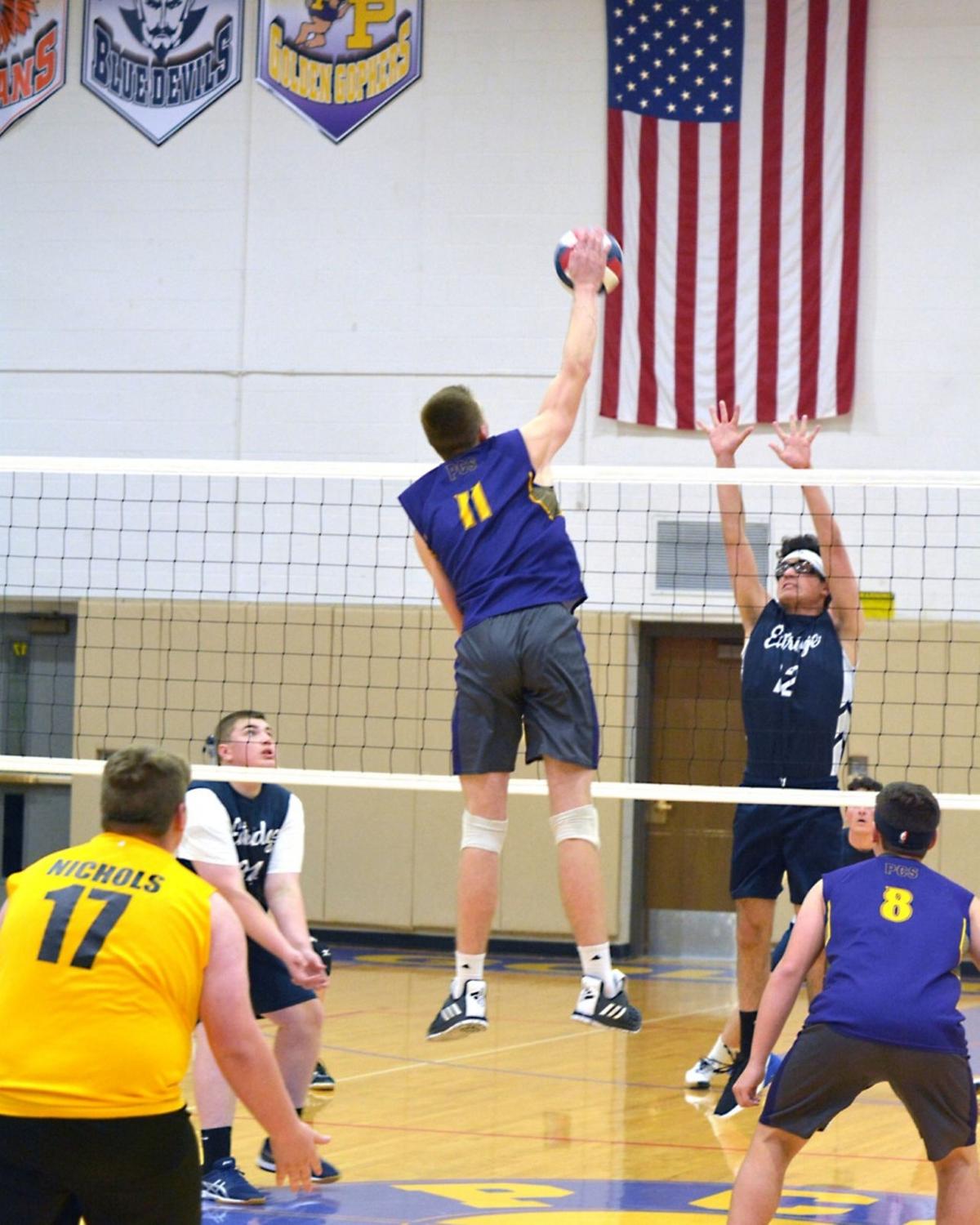 Provided Cameron Milligan gets the kill during a volleyball game. 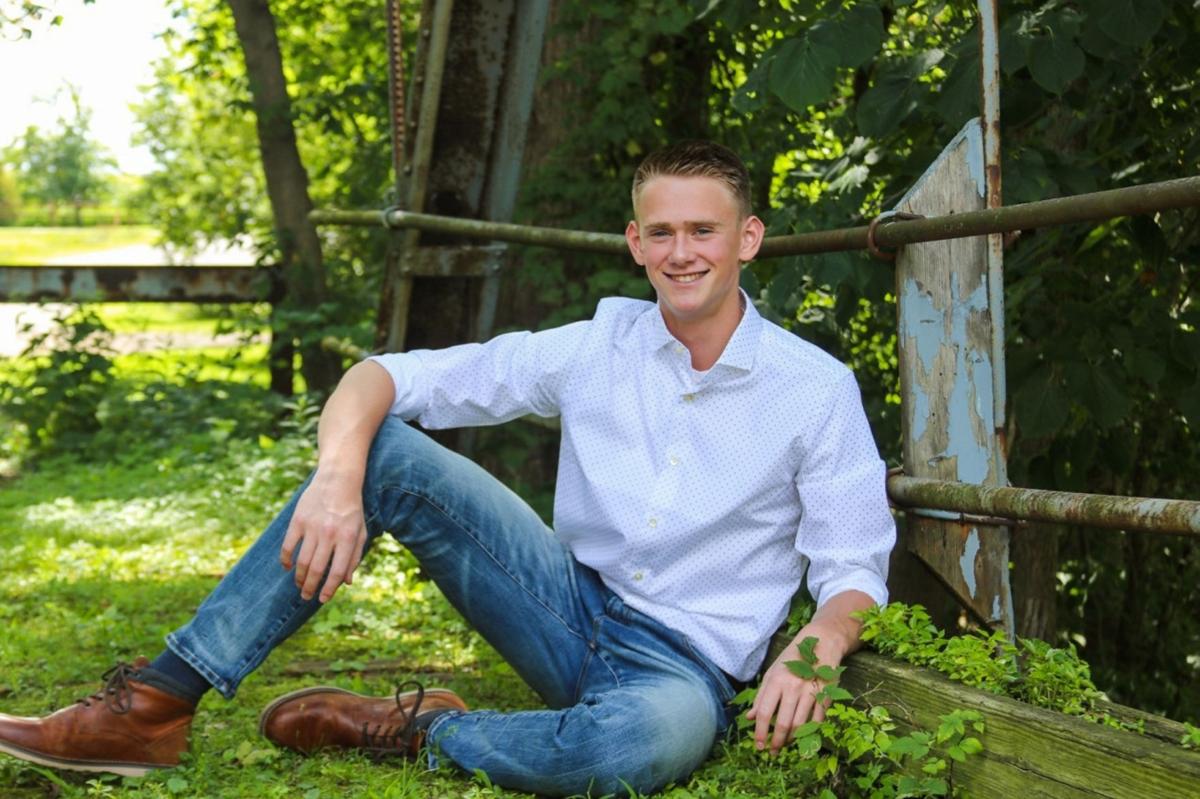 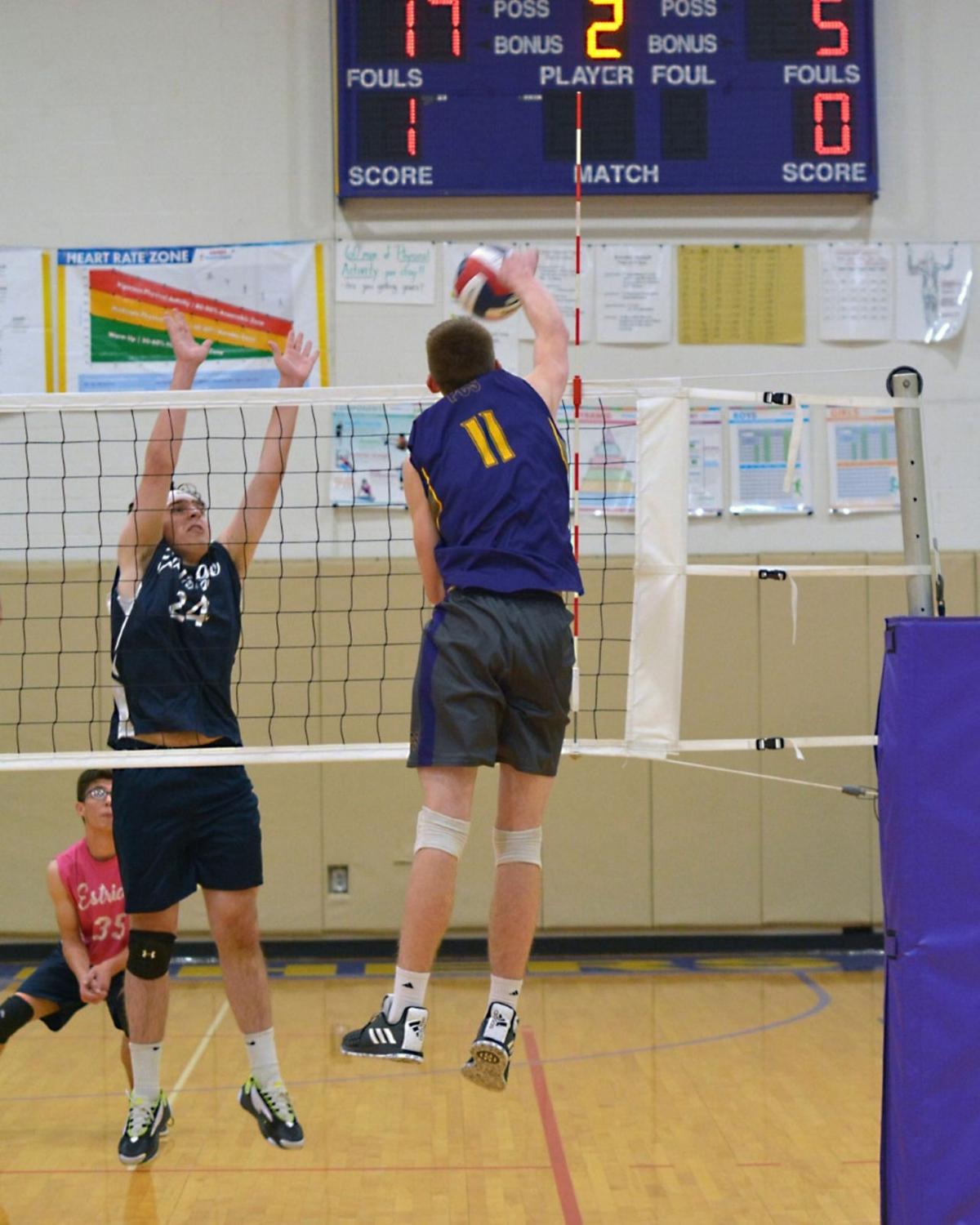 Photo by Doug McFarlandEven as an up and coming freshman, Pavilion’s Cameron Milligan showed the opposition that he meant all buisiness on the volleyball court. Four years later Milligan will be playing college volleyball this coming fall at D-II Daemen College in Buffalo.

Provided Pavilion senior Cameron Milligan was a three-sport standout for the Golden Gophers and will be heading to D-II Daemen College this fall to play volleyball.

Provided Cameron Milligan gets the kill during a volleyball game.

The Pavilion senior left his legacy on the Golden Gophers’ volleyball program with numerous records — including both career and single season in kills — during his outstanding high school career.

Impressively, Milligan will leave the Pavilion program owning records in single season kills (478) and total kills in a single match (43), as well as producing 882 career kills, No. 2 all-time in the program.

His accolades on the volleyball court are a mile long including being a three-time all-star and being selected to the Section V Class B All-Tournament Team this past season. He was also named ‘Most Improved’ following the 2017 season, was given the ‘Coach’s Award’ in 2018 and was named the team MVP this past fall under head coach Rob Milligan, Cameron’s uncle.

Cameron didn’t just shine solely on the volleyball court as he also enjoyed success in basketball, baseball and track and field the past four years.

He was a two-time LCAA All-Star in hoops and was recently named team MVP this past season. As a junior, he was selected as the team’s ‘Most Improved Player.’

After starting his career playing baseball, and earning the team’s most improved player honors in 2017 as a freshman, Cameron made the jump to the track where he showed his versatility and was named the program’s MVP last spring.

Not only a standout on the athletic courts, Cameron is also an excellent student in the classroom where he is ranked No. 6 in his class academically.

This past year, Cameron was president of the National Honor Society and also earned both the ‘Chemistry Achievement’ and ‘Finger Lakes Scholar’ awards.

Cameron had many great memories playing sports at Pavilion.

“Making it to the sectional finals for volleyball as a freshman with my older brother Caleb, and then getting back there again as a senior were really special moments for me,” Cameron shared. “Because we are such a small school and often have new players join the team every year this was a great accomplishment playing against Class B competition. Another memorable experience was playing for Coach Jeffres in his first year of coaching varsity basketball, and of course scoring 26 and dunking in Geneseo this season.”

Playing sports in Pavilion connected Cameron with many outstanding coaches, first and foremost his father.

“The first person that inspired me in sports was my father who taught me hard work and fundamentals,” Cameron said. “The lessons he taught me about outworking my opponents is something I will never forget and has definitely led to my successes. I also appreciate he opportunities my Uncle Rob gave me in Pavilion volleyball. My basketball coach, Jack Jeffres taught me a ferocious attitude on the court and gave me an opportunity for morning workouts to become a stronger, more dominant athlete. Last summer I was a part of a ‘High Performance’ volleyball team and my coach was Donald Gleason. He introduced me to the highest level of volleyball that I had never played at and a different coaching style that showed me very fast improvement that I will remember forever.”

With the cancellation of this year’s spring season in track and field, Cameron was disappointed that he would not be allowed a chance to cap off a great high school career with a run at a sectional patch or two.

“I was very disappointed not being able to finish my high school athletic career with track and field being my last opportunity to compete for a sectional title,” Cameron said. “Last year I missed sectionals for a national qualifying tournament for club volleyball thinking I would have one more chance as a senior this year. With coronavirus we’ve also missed out on a lot of activities like the prom and senior trip that I was really looking forward to having with a very fun group of juniors and seniors.”

Nobody has appreciated putting on that Golden Gopher jersey more than Cameron Milligan has, and although it didn’t end like most seniors were hoping for, Cameron will take the memories with him to the next level.

“Although it is disappointing that I can’t finish my high School career, I know there is nothing I can do about it and this won’t stop me from working hard,” Cameron said. “Pavilion sports is what I grew up watching and learning from. When I started playing I don’t believe I’ve ever taken my time for granted. I am proud of what my teams accomplished and what I personally accomplished. I will cherish memories I made in my seasons and the friends I gained in my teammates. High School sports have been a huge part of my life and I will miss them but I hope that college sports will be just as special.”

Pavilion AD Jim Sattora knows how valuable Cameron has been to the Golden Gopher sports program.

“Cam has been an exceptional athlete for Pavilion,” Sattora said. “He was always willing to put in the time in the off season to improve himself. No matter what sport he participated in, you always knew you would get his best. I wish more people got to watch him play boys volleyball. He had the ability to completely dominate a game. We will miss him.”

Up next for Cameron will be attending D-II Daemen College to play volleyball for the Wildcats and head coach Don Gleason where he will major in athletic training.