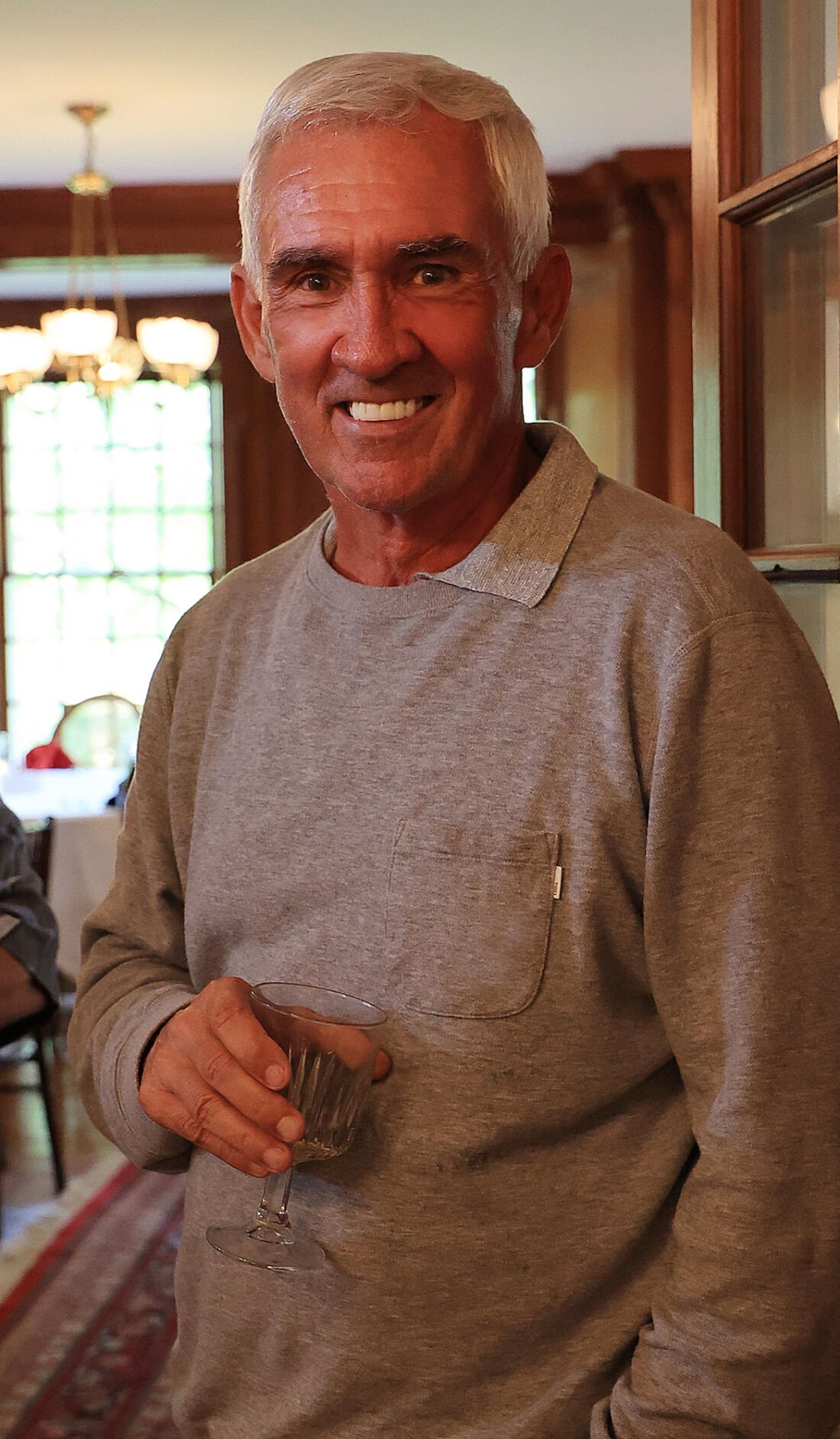 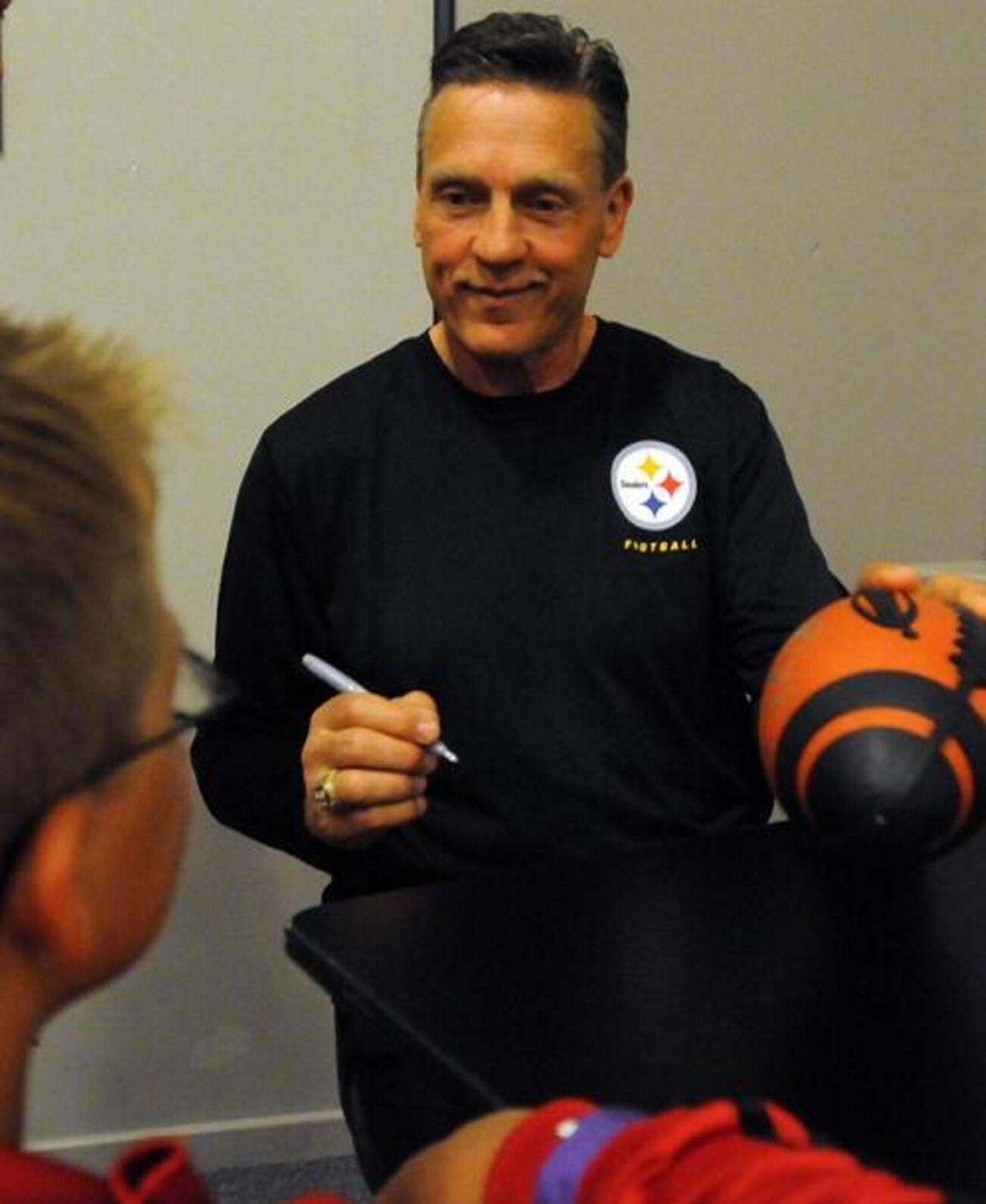 LE ROY — On Friday morning, after a year delay because of COVID-19, the Le Roy Oatka Knights Hall of Fame inducted its fifth class in a ceremony held at Le Roy High School.

However, Thursday night the Hall held a private ceremony at Mercy Grove in Le Roy to honor the inductees, specifically those from out of town. And because of one inductee, a few select people were able to meet and carouse with a pair of NFL greats during the evening.

Of the 10 individuals and two teams that were being honored this week, one was Le Roy great Jim Rudgers, who has long been an integral part of the Hall of Fame. Along his journey, Rudgers has met a number of people whom he had an impact on and/or impacted him and a pair of them made the trip to Le Roy in legendary NFL head coach Mike Shanahan and longtime NFL great lineman Ted Petersen, most known for his time spent with the Pittsburgh Steelers.

For Shanahan and Peterson their paths crossed with Rudgers at Eastern Illinois University.

Before his longtime coaching career, Shanahan was a stellar quarterback for Eastern Illinois before a devastating injury coast him his playing career and nearly his life. Following the end of his playing career, Shanahan would serve assistant stints at Oklahoma and Northern Arizona before he returned to his alma mater as the offensive coordinator, where he worked with Rudgers.

“He did a heck of a job,” Shanahan said of Rudgers. “When I went to Florida I said if you want to hire an offensive line coach, this is a guy. Jim was one of the guys that I wanted to hire and he was a hell of a football coach.”

For Peterson, he would play for Rudgers at Eastern Illinois before taking off on his NFL journey and he actually owes a lot to the Le Royan for helping him get to where he got.

“I was a junior tight end, I won the starting spot, I played two games and we had a conference and he said that they needed me to play center,” Peterson said after joking with Rudgers about the move. “I was crushed and thought about transferring and I had a bad attitude for a while, but looking back it was one of the best things that ever happened to me. I end up becoming an All-American center and drafted in the fourth round by the Steelers.”

Shanahan, who would go on to coach for 20 seasons in the NFL with the Los Angeles Raiders, Denver Broncos and Washington Redskins — with back to back Super Bowl titles with Denver and a career record of 170-138 — said there is a lot to gain from special gatherings like the one in Le Roy on Thursday night.

And there is also a special thing about the coaching fraternity that most people who aren’t in the profession won’t see.

“The fun part about it is the guys you meet along the way,” Shanahan said. “There’s going to be guys here from the past that you’re going to say, ‘Holy cow.’ That’s one thing in coaching, you get to meet a lot of different people, the people that stayed in the profession, like Jim. It was 1980 and we were only together one year but we’ve stayed friends ever since. I followed his career, he followed mine. When you know good people, you try to stay around them.”

For Shanahan, who hasn’t been a head coach in the NFL since his final season in Washington in 2013, the ending to his career wasn’t the one that he had hoped for, but it wasn’t all bad either.

After the short stint with the Raiders, Shanahan would coach 14 seasons in Denver, going 138-86 with the titles in 1997 and 1998. A year removed from Denver, he would be hired to turn around the struggling Redskins and he would do just that. But there was more to it than meets the eye.

Along with working with his son Kyle, who was the offensive coordinator, the two had big plans in Washington that never were able to come to fruition for a few reasons.

“When we first got hired I hired a young coaching staff and I told my son ‘this isn’t going to happen overnight,’” he said. “So we win six games and then five games but going into my third year, I was really disappointed because we had a $36 million cap fine and we went into the offseason thinking we had $40 million. So we’re going to into free agency thinking ‘we’ve got these three guys committed to us’ — Raheem Morris from Tampa Bay, Aqib Talib, Michael Bennett, then a couple other guys from Tampa Bay. So I felt really good going into that year. Then free agency hit and we couldn’t do that. We made the trade to get Robert Griffin, we got Kirk Cousins, we put in the new offense and at the end of the year we got the playoffs. We were in the top five in offense, we were as good as anybody at that time, but we wound up 31st in special teams and 32nd in defense and we still wound up winning the NFC East.”

The Redskins finished 10-6 in Shanahan’s third season and won the NFC East before losing to Seattle in the Wild Card round. Shanahan was widely criticized for his handling of Griffin’s knee injury that season and would eventually be fired following the next season. Griffin would never be the same after his injury, while injuries and a lack of depth would eventually cost Washington’s momentum going into Shanahan’s final year.

“Even through all the tough years, there are always some good things to come out of it,” Shanahan said.

Kyle Shanahan, after a number of offensive coordinator positions, will be entering his fifth season as head coach of the San Francisco 49ers this season, taking the team to the Super Bowl in 2019.

As a father would, Shanahan has enjoyed every minute of being a part of the ride with his son, and now watching his son coach at the highest level.

“He was actually a ball boy when I was with the 49ers and he had the chance to be at practice every day and he loved it,” Shanahan said. “Now it’s fun to watch the process, first when he got the opportunity at Houston where he got to start calling his own plays and then at Washington and watching that grow, then he goes to Cleveland and then to Atlanta. It’s such a learning experience. I think the thing that I enjoy, especially as a father, is watching and knowing ‘this is going to get him to the next step.’”

After being picked with the 93rd pick in the 1997 draft, Peterson went on to play offensive line for the Steelers until 1983 before short stints with the Browns and Colts and another short run with the Steelers in 1997.

And though he has been retired for over 30 years, and after winning a pair of Super Bowl titles, Petersen remains a fan of the game that he loved.

“I still watch the Steelers,” Petersen said. “You know, when I was a player I was a student of the game and I knew it very well. I knew every player in the league and every move of every defensive lineman because that’s what you do. I’m not that astute anymore, but I do really enjoy the game.”

And along the way he has seen a plethora of changes come to football, most importantly the rules regarding player safety and head injuries. From the rugged NFL of the late 1970s and early 80s, the game has almost completely transformed itself into a different brand of football. And while some from that era may not embrace the changes, Petersen says that they are certainly not all that bad.

“I think it’s great for the players, but I kind of wish and want people to know what it was like to play back then,” Petersen. “Two examples, in college we had 20 practices in the spring and after I graduated they cut it to 10. It was very physical. Then I get to the NFL, we have six preseason games and I was in camp for nine weeks as a rookie. Now it’s cut to three games and they hardly do anything when they’re there.”

As for something you would never see anymore? Petersen has a personal example to go with that as well.”

“True story, I go to training camp in ‘83 and we’re down to six offensive lineman that are healthy — I’m one of them. I took every snap of every play on offense and on defense as the scout squad, played every play in the preseason and every play of every game during the season. So that takes a toll on you. So, I think they’re headed in the right direction now.”

As Petersen sat on the patio at Mercy Grove, he was greeted by a number of Le Royans who were entering the event. He greeted them all with a smile and was a gracious as could be. He then reflected on how football, or athletics in general, can definitely bring people together.

“It is common ground, isn’t it?” he said. “You might be divided between a number of different things, but when the Bills are playing this area is probably unified and excited about what’s going on. I can’t speak for Buffalo but the Pittsburgh Steelers fans are some of the very best, they’re phenomenal and very supportive and I think most small towns are that way too.”

Le Roy is no exception. On Thursday night the town got to show off its pride for athletics to a pair of individuals who have made it to the highest possible level.

And from the looks of it they did it just right.