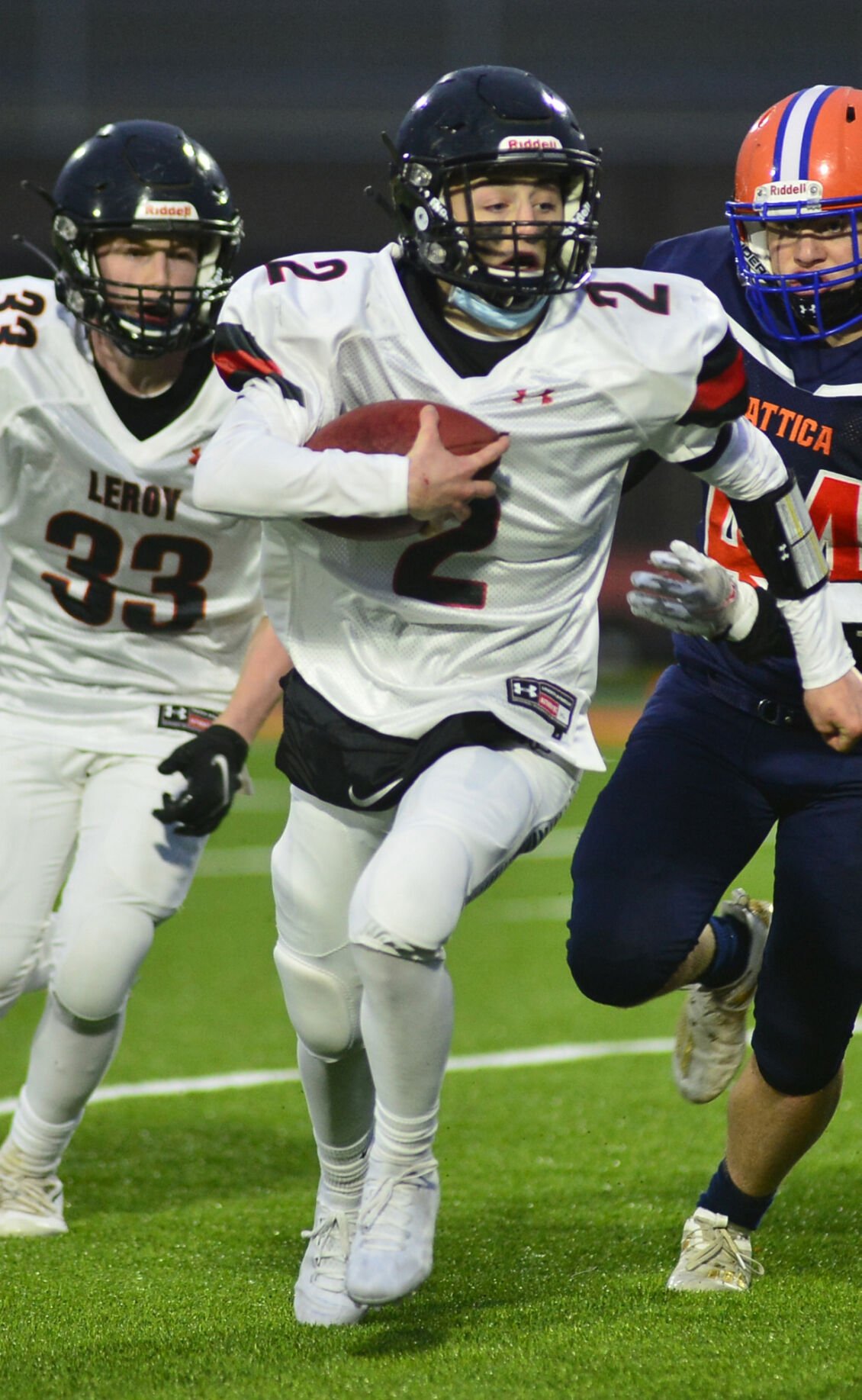 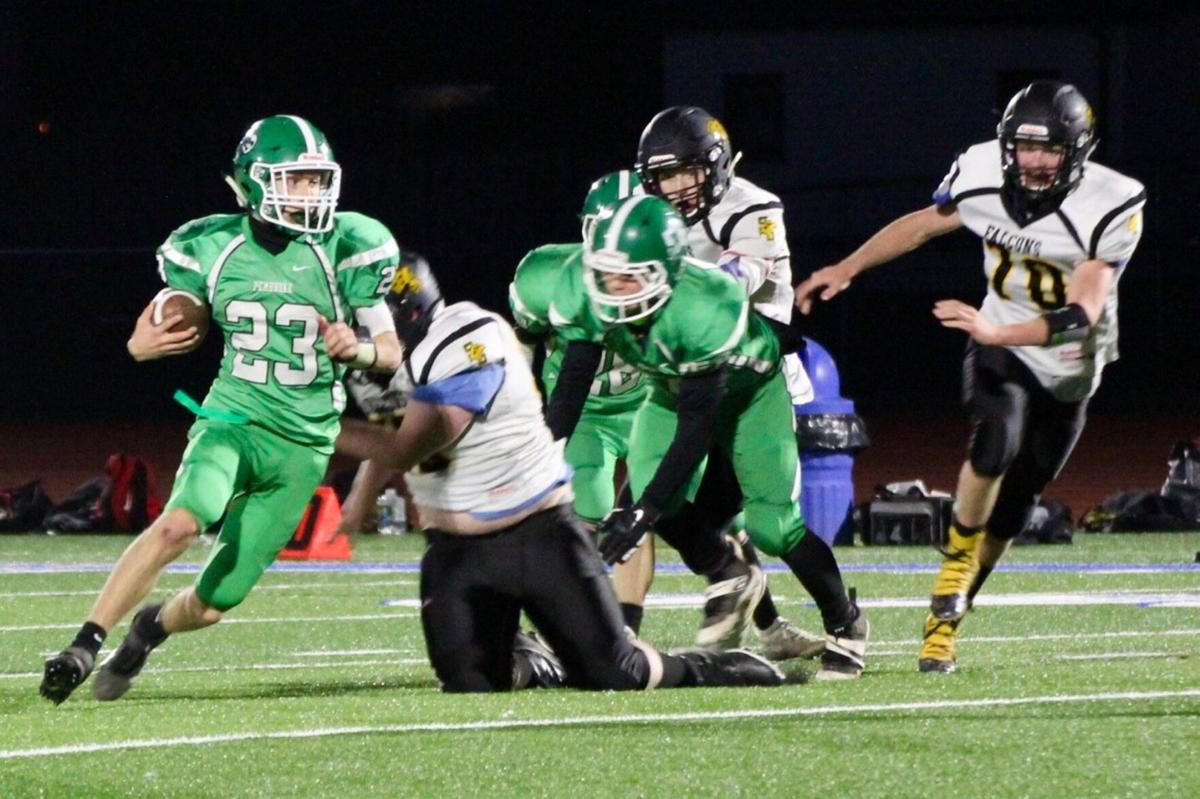 Elizabeth Gabbey/For The Daily NewsGarrett Totten breaks a tackle during a big night for the Pembroke offense. 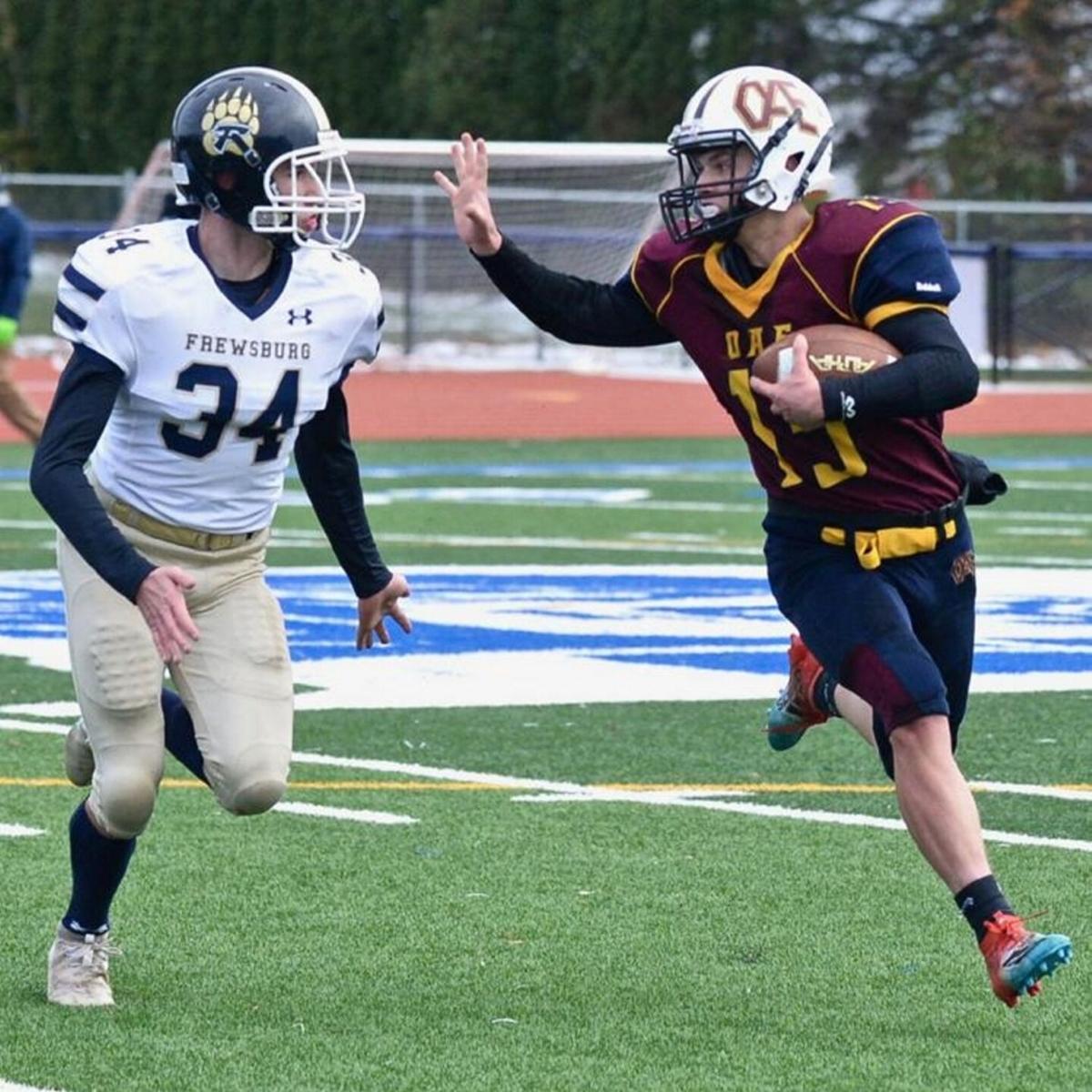 Elizabeth Gabbey/For The Daily NewsGarrett Totten breaks a tackle during a big night for the Pembroke offense.

With Week 2 of the spring high school football season having finished up, things have begun to look a little bit more clear, as a number of teams moved to 2-0 with dominating efforts.

Batavia cruised to a second straight win in Class B, while Le Roy posted its second straight shutout with a win over Attica. Meanwhile, Oakfield-Alabama/Elba rolled to yet another win, while injury-riddled Notre Dame, as well as Alexander, stuggled in losses.

Here is a look at some of the top performers for the week:

• While he only finished with two grabs in Batavia’s win over Wayne, Devils wide receiver Tyler Budziniak made them count as they went for 111 yards, including a touchdown, in the 46-30 victory.

• Another of Batavia’s offensive weapons, Alex Hale also put together a solid day in the win over Wayne as he caught three passes for 57 yards and a pair of touchdowns.

• In another huge win for Oakfield-Alabama/Elba, freshman quarterback Bodie Hyde wasn’t asked to do much but he still finished the day 4-of-5 through the air and finished with 111 total yards and a passing touchdown.

• The Alexander offense struggled in a 21-0 loss to Avon on Saturday but junior quarterback Nick Kramer did as much as he could, running 17 times for 92 yards.

• Another game, another monster performance for O-A/Elba senior running back Ty Mott. In a rout of Geneseo, Mott finished with five touchdowns on the ground for the second straight game, while he ran the ball 25 times for 243 yards.

• The Le Roy defense was largely reponsible for a big 20-0 win over Attica on Friday, but senior QB Alex Panepento was once again strong in just his second career start under center. Panepento was 8-of-14 for 74 yards and a touchdown, while he also ran 12 times for 62 yards and another score.

• In Batavia’s easy win over Wayne, quarterback Jesse Reinhart had himself a day. In his second straight solid start to the year, Reinhart went 8-of-12 through the air for 200 yards and three touchdowns in the 46-30 victory.

• The Avon defense shined in a 21-0 win over Alexander, but quarterback Andrew Rowland was solid, throwing for 60 yards and a touchdown and also rushing 13 times for 84 yards and another TD.

• For the second straight game Batavia’s Terrez Smith went over the 100-yard mark in an easy win. Against Wayne, Smith ran 18 times for 155 yards and three touchdowns, while he also returned a punt 75 yards for a score as the Blue Devils moved to 2-0.

• In Cal-Mum/Byron-Bergen’s 16-8 win over Notre Dame, Kyle Wade was named the Casella Waste Player of the Game. Wade finished the day with 44 yards rushing and two touchdowns, he was 7-of-14 through the air for 86 yards and he also threw for a two-point conversion.

• In a grind-it-out win over Alexander, Thomas Welch led the way for the Avon ground game as he finished with 12 carries for 93 yards and a touchdown.

• Letchworth/Warsaw has gotten off to a slow start to the season but QB Austin Williams has done his part. In a loss to Dansville, Williams was 7-of-10 through the air for 99 yards and a touchdown, while he ran for 54 yards and another score.

• Alexander struggled to a 21-0 loss to Avon at Van Detta stadium, but the defense forced four turnovers and was led by linebacker Devin Dean, who finished with 11 tackles.

• In a loss to Cal-Mum/BB, the Notre Dame defense was solid, holding the Raiders to just over 200 yards, led by 10 tackles from junior linebacker Vinney Dirisio.

• Batavia jumped out to a huge lead against Wayne on Saturday and the defense did enough to hold the win, led by eight tackles from junior linebacker Kaden Marucci.

• The Casella Waste Player of the Game on Friday night, Zach Vanderhoof was impressive for Le Roy yet again. In the second straight shutout for the Oatkan Knights, Vanderhoof finished with nine tackles — five for a loss — and three sacks in the win over Attica.

• The aforementioned Kyle Wade also did some damage on defense for Cal-Mum/B-B, finishing the game with two interceptions, including one that sealed the game with under two minutes remaining.

• Running back Jake Affronti was outstanding in Holley’s first win of the season as he rushed 25 times for 253 yards and four touchdowns, while he also caught three passes for 73 yards and another score.

• Perry may have fell to Red Jacket in Week 2, but Justice Fanaro was fantastic from the QB position. Fanaro was 15-of-33 for 421 yards and five touchdowns with just one interception, while he also ran seven times for 46 yards.

• Fanaro’s top target was WR Riley Kowasz, who caught seven passes for 226 yards and three touchdowns in the loss for Perry.

• Pembroke picked up its second win of the season and QB Garrett Totten did his damage on the ground and through the air. Totten ran 12 times for 120 yards and two TDs, while he was 3-of-4 passing for 101 yards and another touchdown.

• Freshman fullback Tyson Totten also came up big for Pembroke as he ran seven times for 121 yards and two touchdowns, while he also caught a pair of passes for 79 yards and a score, a 72-yard strike.

• Holley also got a solid day out of Chuck Turpyn in the win as he had 70 yards on the ground and a score and two catches for 28 yards and another touchdown.

• In Holley’s win over Lyndonville/Barker, David Faruggia led the way with a huge afternoon with 12 tackles and a pair of sacks.

• Pembroke moved to 2-0 on the season and got another big day on the defensive end from junior linebacker Peter Farrington, who finished the game with seven tackles, a fumble recovery and a sack.

• Also for the Hawks in their win, Tristan McFadden was strong as he recorded nine tackles and a pair of sacks for Holley.

• The Perry defense struggled against powerful Red Jacket in a loss, but Lucas Sears was big for the second straight game as he finished with 11 tackles, including two for a loss.