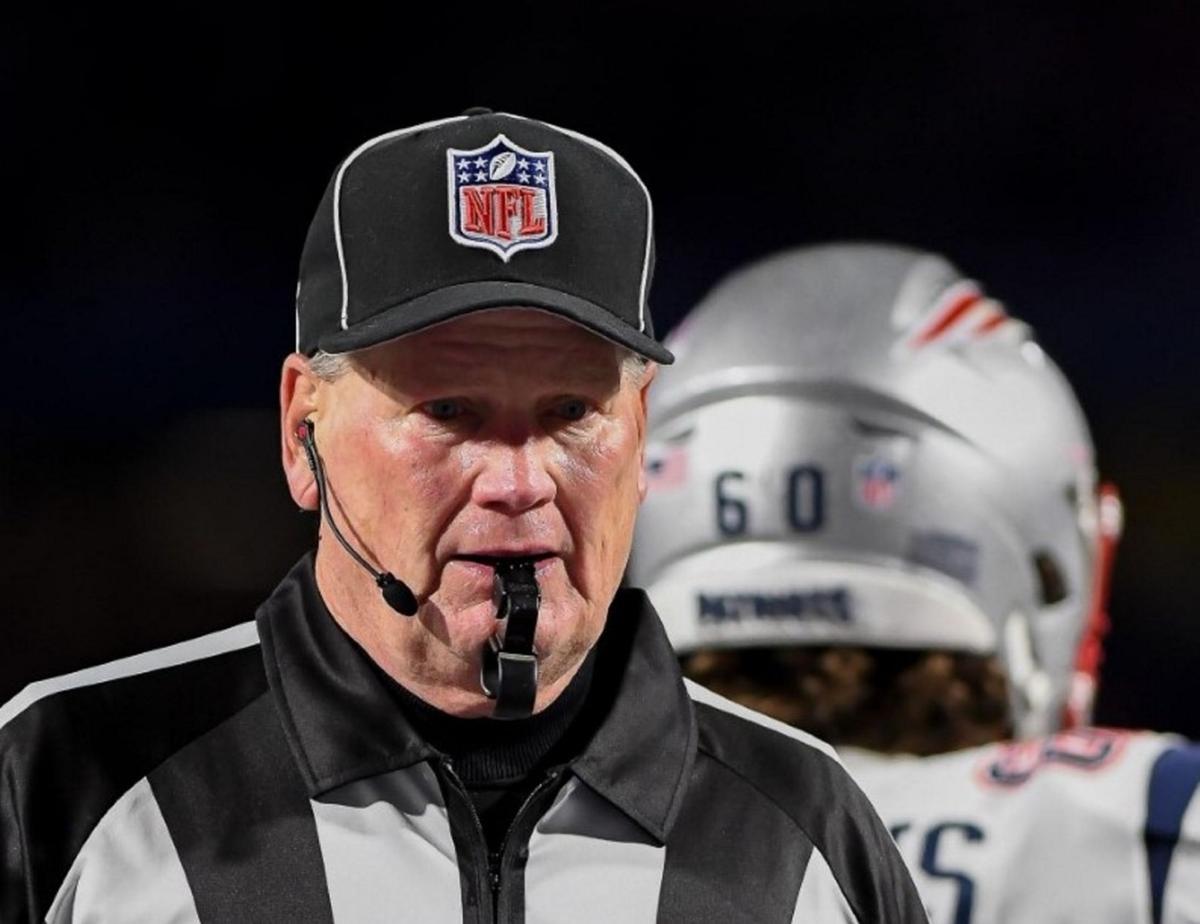 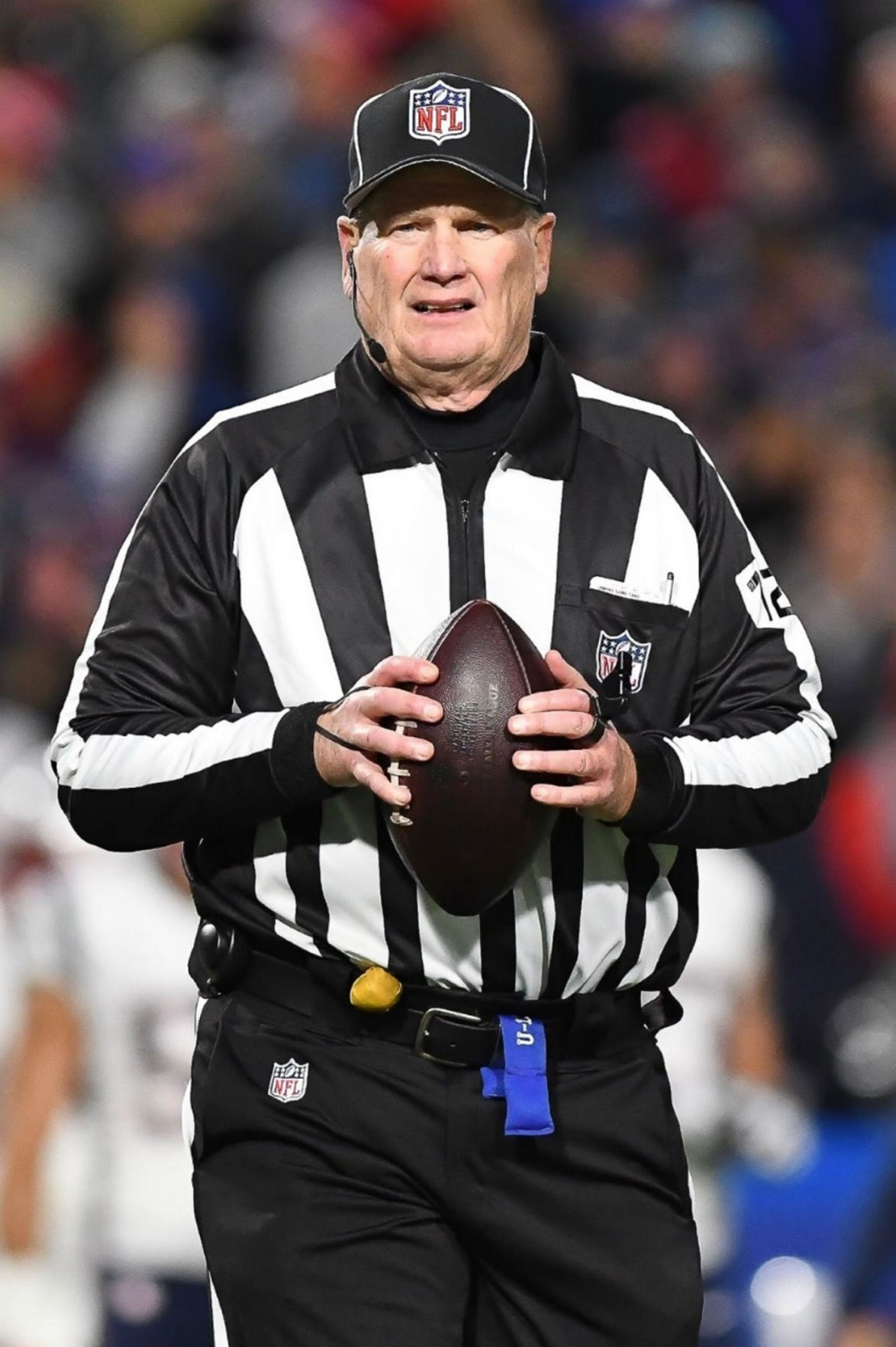 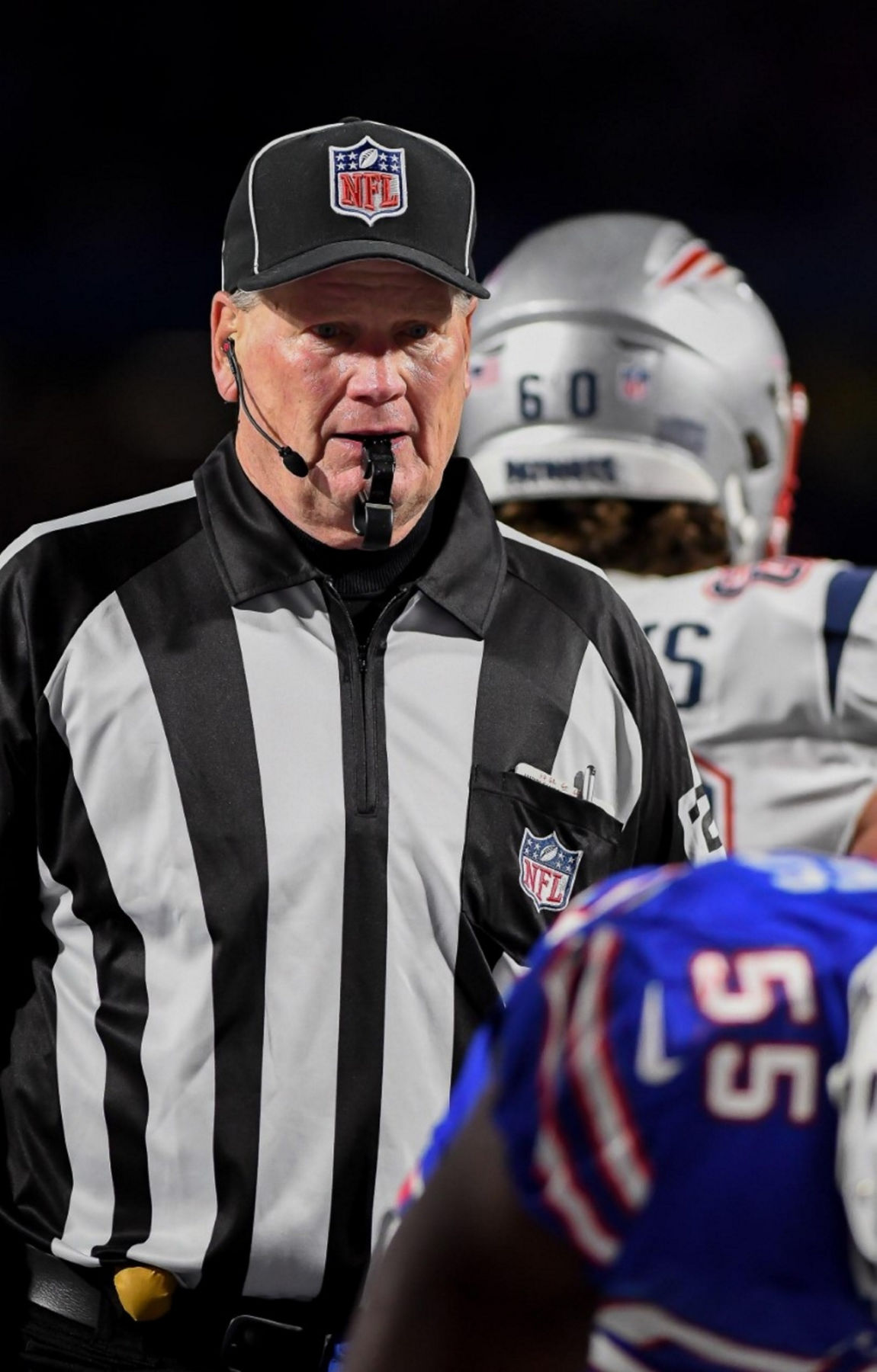 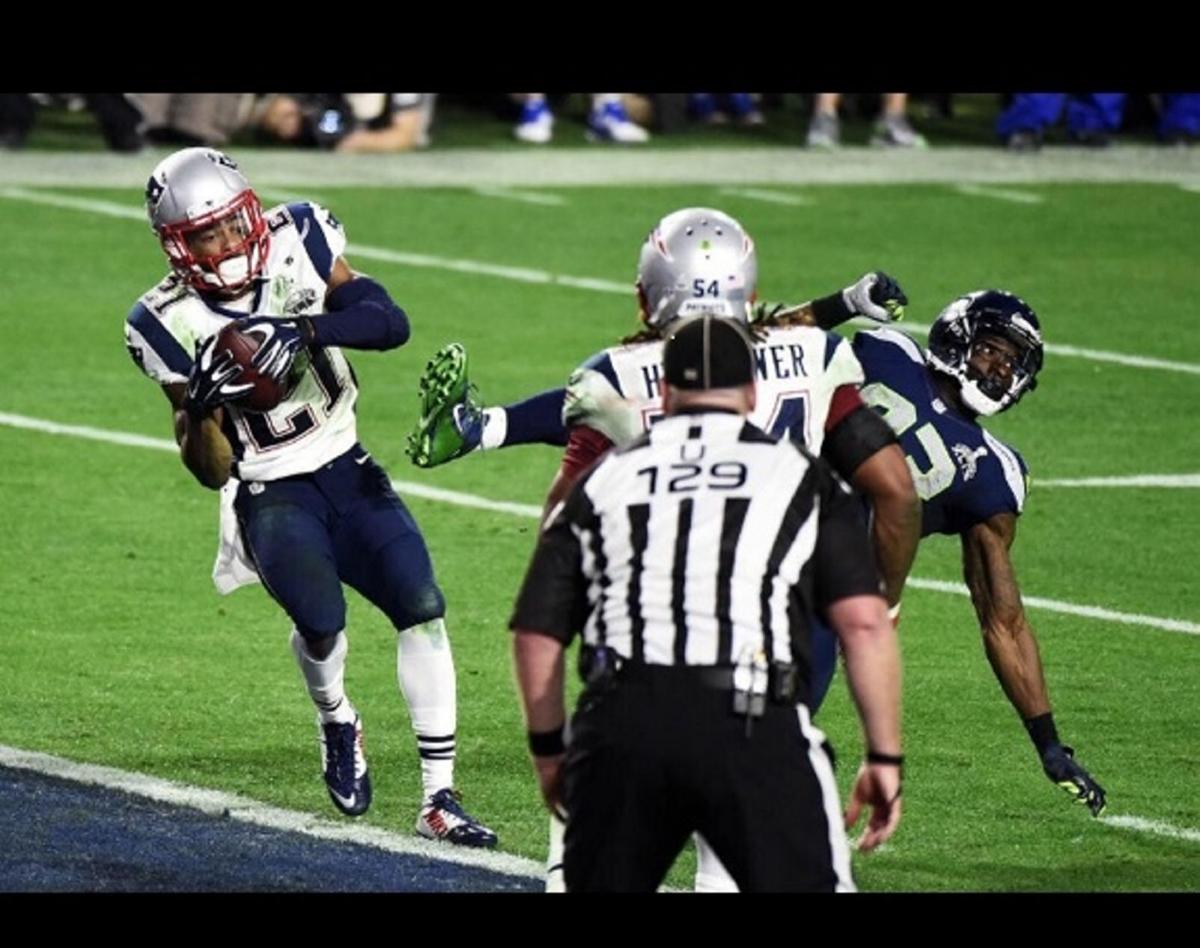 Provided Livonia’s Bill Schuster during the final seconds of Super Bowl XLIX as the Patriots picked off a late pass to seal the victory over Seattle. 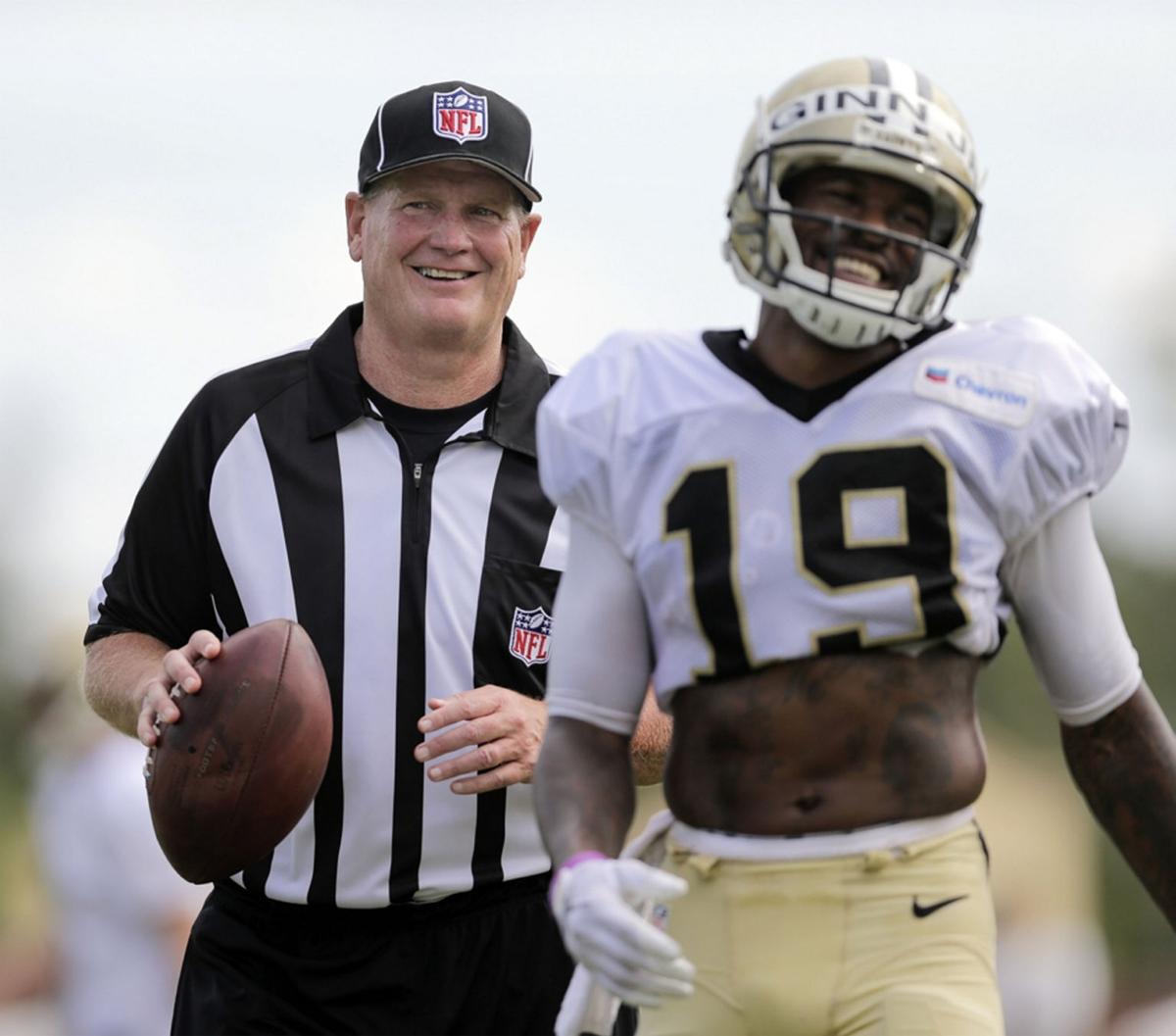 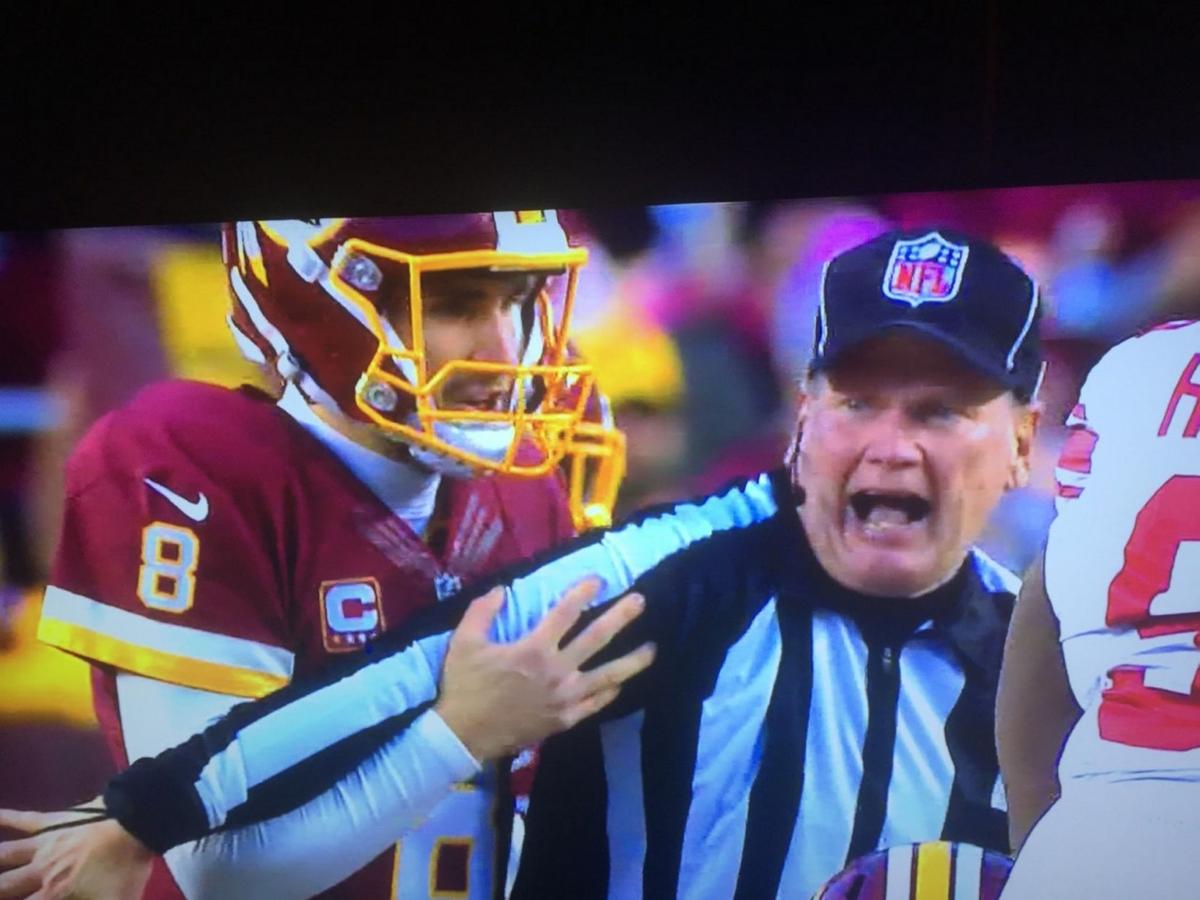 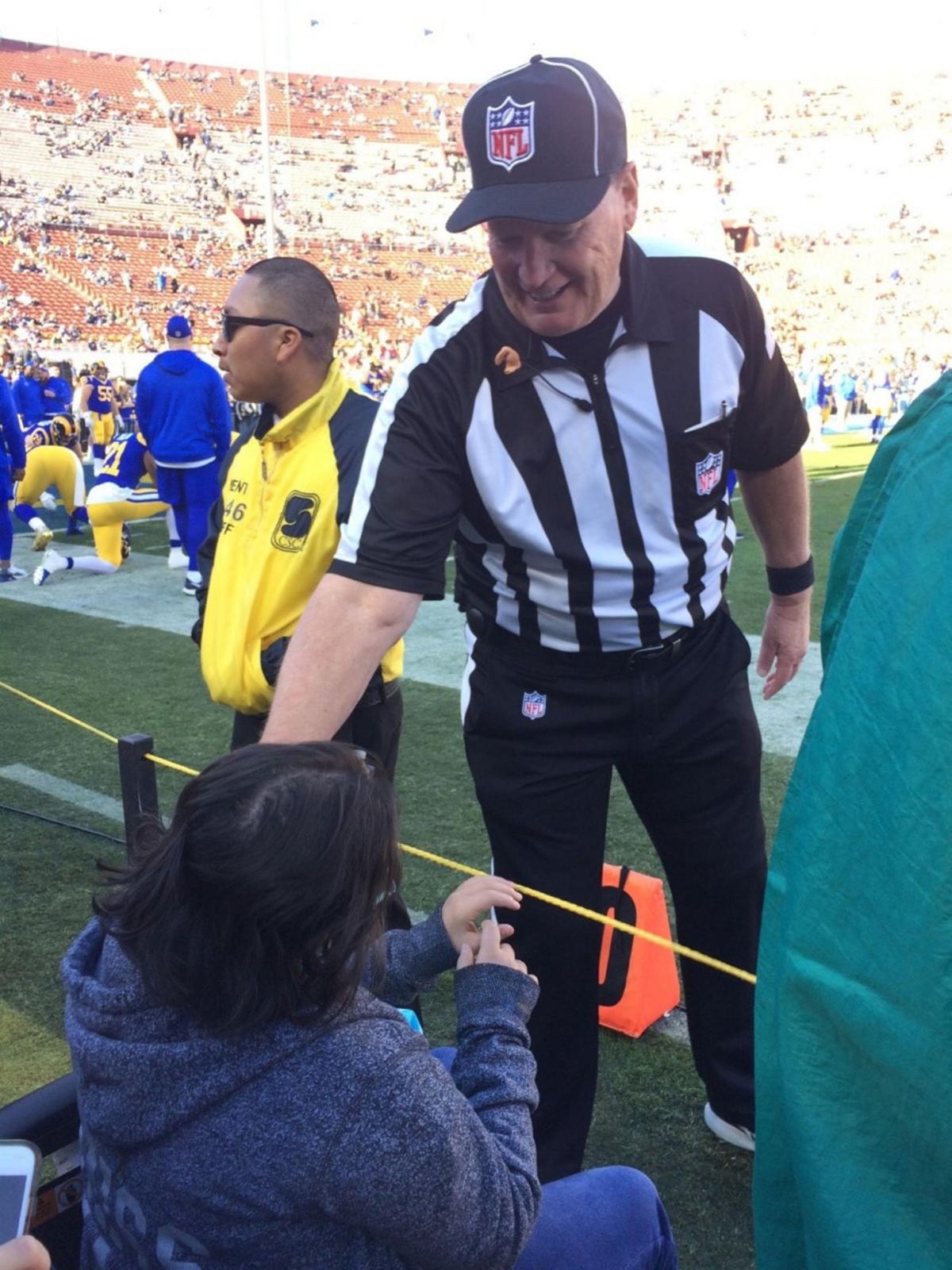 Provided Livonia’s Bill Schuster during the final seconds of Super Bowl XLIX as the Patriots picked off a late pass to seal the victory over Seattle.

The 1976 Livonia High School graduate and three-sport standout went on to become an All-American tight end at Alfred University, along with his younger brother Bob, who played QB.

Schuster graduated from college in 1981 with a Bachelor of Science degree in business administration.

His next decision would be one that would change his life forever.

While working his first job — Prudential Insurance — Schuster’s co-worker Frank Marafino, one of Section V’s top officials back in the day, approached him about possibly becoming an official.

Marafino had followed Schuster’s career throughout high school and college and had even officiated several of his high school games back in the 70’s.

“I always wanted to be a coach,” Schuster said. “So he tells me, ‘Why don’t you come to our first meeting, and see if you like officiating.’ I told him, ‘I’m not going to like it — I want to coach.’ He says, ‘Yeah, well if you officiate you could work five, six days during the week and you could make the same amount of money and not have to deal with all the things that coaches have to deal with seven days a week.’”

So Schuster decided to take Marafino’s advice and go to a meeting.

“I’ll never forget it,” Schuster recalls. “It was a Thursday night I sat in the first meeting. Mike Palermo was there talking, Frank Marafino, Larry Tripodo, these were some big names in Section V football. After I got done with that first meeting I said to myself that this is what I want to do.”

Like most officials, Schuster started at the youth level.

His first game, in fact, was right in Livonia, on the same grass he played on.

He will always remember what happened after that first game when a parent on the opposing team invited him into the parking lot to talk about his officiating.

Being a young, raw, rookie, Schuster took off his jersey and walked into the parking lot.

And the rest is history as Schuster has been blowing his whistle ever since.

He went from youth football (1982) to high school football from 83-87 working with the Rochester Chapter of Certified Football Officials (RCCFO).

In 1988, he worked his first college game for local ECAC Division III Football.

In 1994, Schuster received his first officiating position for NCAA D-I AA in the then Yankee Conference.

Four years later he was hired by the Big East Conference and that summer the NFL Europe came calling.

So after starting officiating in 1982, 18 years later, he would get the ultimate promotion when Jerry Seeman, Supervisor of Officials for the National Football League sent him a packet with jersey -129 for the soon-to-be umpire.

His referee would be Bernie Kukar.

In his 20 years in the NFL, Schuster’s post-season accolades speak volumes to what the league thought about his ability to officiate.

In all, Schuster was an official for nearly 300 NFL games.

TDN: Can you sum up your NFL officiating career for us and were you every nervous before games?

SCHUSTER: “I would be remiss if I didn’t mention the love and support, I received throughout the years from my family, friends, and the community. That is what kept me motivated to be the best I can be every weekend. I owe a big debt of gratitude to my wife Mary, who was there every single step of the way for me, and there is no way I could have done this without her. As I look back at my career, it certainly was a privilege to work in the NFL for 20 years. How fast time flies. I remember the day Jerry Seeman called me in June 2000, he was the Supervisor of Football Officials at the time, and was calling to offer me a position in the NFL. After I hung up the phone with Jerry, my first thought was, after 18 years officiating many levels of football, it’s time for the big leagues, and I was ready. My first training camp was with the NY Jets and I remember Brian Cox was on the team at the time, he knew I was a rookie, and when I worked the practices he would say ‘Hey 129, with a three digit number you are not going to last very long.’ I obviously proved him wrong. My first preseason game was Aug. 2000 at Three Rivers Stadium in Pittsburgh. I can remember walking out onto the field and thinking to myself, this is the home stadium of the Pittsburgh Steelers and all of their great football players, it seemed surreal. My first regular season game was Jacksonville at Cleveland. The head coach at Jacksonville was Tom Coughlin and we had a lot of small talk about our roots back in Rochester. My career wasn’t without challenges though. In June of 2015 I was diagnosed with esophageal cancer. After my surgery, they gave me an 18 percent survival rate, but I wasn’t going to have that. With the constant love and support of family, friends, my community, and my NFL family, I beat it. I told my surgeon I would be back on the field within six months, it was a little longer than that, but I came back stronger than ever. As for nerves, I was nervous every single game. In my opinion, if you do not have nerves, it’s time to leave this game. But the nerves went away at kickoff because we had a job to do.”

TDN: Numerous playoff games and even two Super Bowls, how awesome was it for -129 to be selected for so many of these post season games?

SCHUSTER: “I was honored to work any post season game as well as Super Bowl XIL. That is what you were working towards every week when you stepped onto the football field. I worked a total of about 293 games in my NFL career and loved stepping onto the different fields every single time.”

TDN: How has the NFL changed during your tenure?

SCHUSTER: “It has changed tremendously. When I started in the NFL there were only a handful of TV cameras on the field, and no HD. The use of replay was just getting started. Now with about 28 HD cameras, along with slow motion, there is not an angle you at home won’t see. The coaches are a lot more demanding of the officials’ time, and put a lot more emphasis on a couple different areas such as wanting us more active in their off-season training programs and discussion of rule changes. And as you know the media is very tough on us these days.”

TDN: What was a normal week when you were in the NFL, your weekly routine?

SCHUSTER: “Offseason, in mid-May we have our mini clinic for four days in NYC where we complete our physicals and have various position meetings. Early June, we work OTA’s. Middle of July we have five-day rules/physical assessment in Dallas, TX. End of July until early August before preseason day number one we work five days at training camp. Preseason game one, our regular season weekly routine begins preseason game one and goes right through post season. Saturday at noon we have to be at assigned game city. Saturday (day before kick-off) at 3 p.m. we have three-hour pre-game meeting that consists of reviewing league training videos, league replay video, taking our weekly exam, handling game tickets and travel, reviewing scouting plays about both teams, and reviewing last week’s game. We then have our crew dinner at 6:30 p.m. Sunday (game day), three and a half hours prior to kick-off we leave hotel to travel to stadium. Once arrived at stadium all crew members have assigned responsibilities. After the game we fill out paperwork which usually takes us an hour. Then we head to airport and hope to get home that evening, if not, will return home Monday morning. On Monday (day after game), we review each crew member’s performance during the game and critique ourselves — looking at mechanics, correct/incorrect calls and judgement. Tuesday through Thursday we have physical training and Tuesday night we get our primary grades from our game and we are given a chance to respond. On Wednesday, night we get our final grades and put last week’s game behind us. Thursday is another workout day. On Friday, if I don’t have a Saturday NFL game and Livonia football is home I will go watch them play. Then fly out in the morning.”

TDN: What fan base, in your opinion, was the most diehard of all the NFL teams?

SCHUSTER: “If I had to choose I would say Buffalo and Green Bay have the most diehard fans in the NFL. The fans are very passionate about football and you can just tell when you are in the stadium that they live and breath it.”

TDN: What will you be doing on Sunday afternoons this fall?

SCHUSTER: “The last four years I have been ‘Supervisor of Officials’ for two Division III schools in NYS — the Liberty League and Empire 8. At the same time, I have been an Evaluator for the Big 10 and MAC conferences. With that said, I will stay active in college football with my supervisor jobs and as a replay official for the Big 10 and MAC conferences. At some point I would like to work for an NFL team as an NFL officiating Consultant.”

TDN: With everything going on today with COVID-19, have you spoken with any of the active officials about the upcoming NFL season and what if any are there thoughts on a season, with or without fans?

SCHUSTER: “Yes, I have spoken to a couple active officials and just like everybody else they are concerned with COVID-19. But we are all sure that the NFL will take care of both the players and the officials. I do think they will have a season, just unsure of whether or not fans will be allowed.”