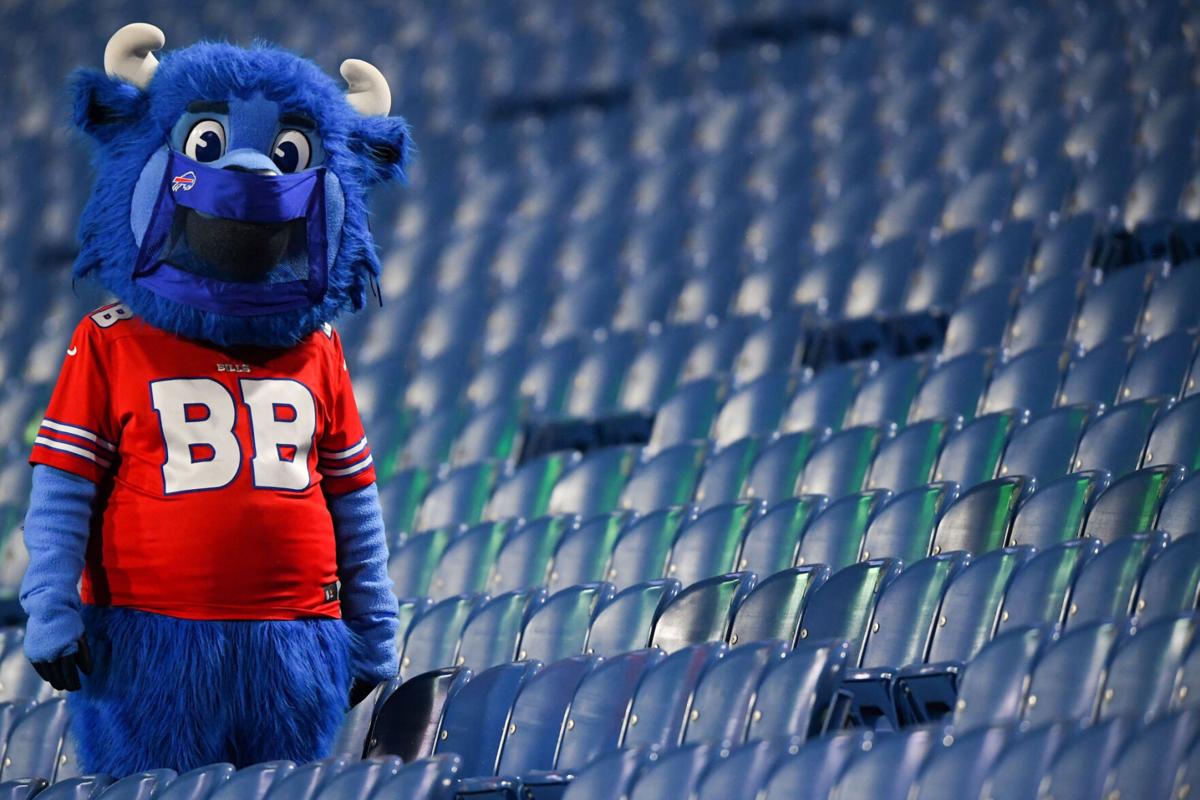 Rich Barnes/USA TODAY SportsBuffalo Bills mascot Billy Buffalo walks in the empty stands prior to the game against the Pittsburgh Steelers at Bills Stadium. 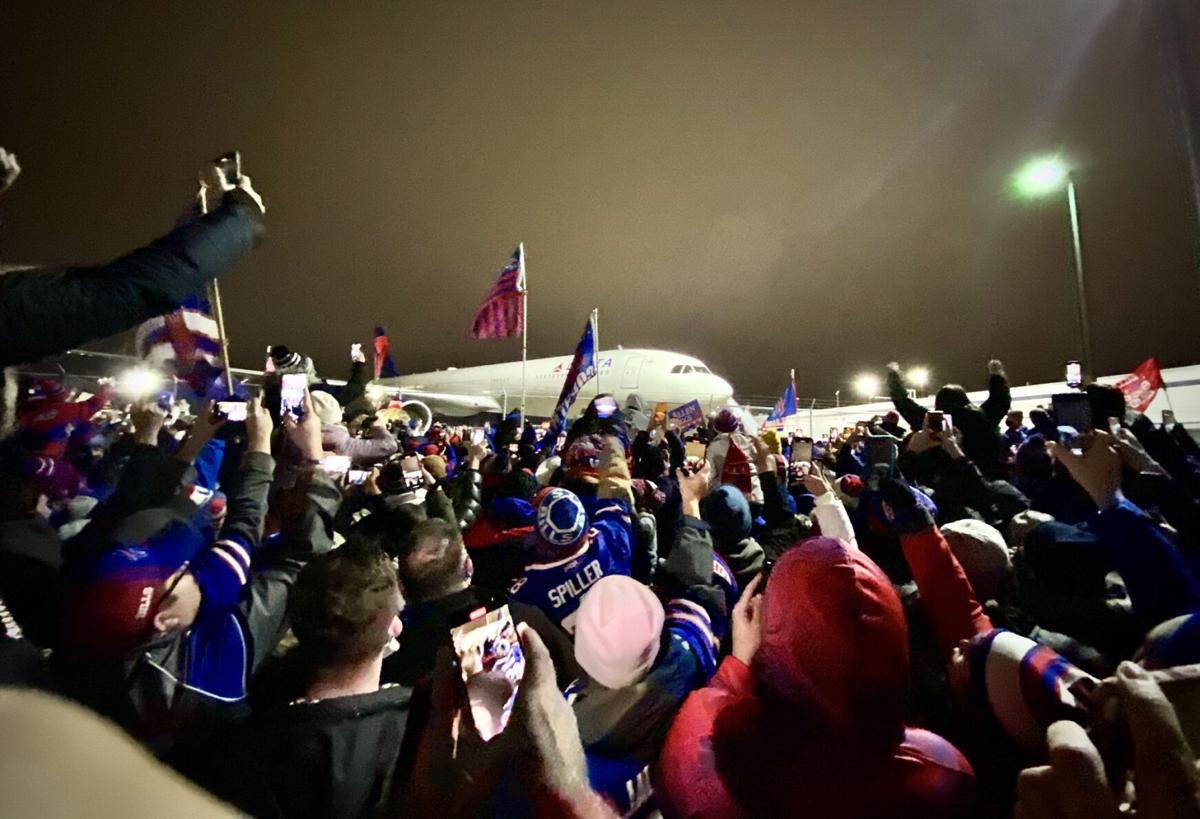 Image via FOX Sports This week, FOX placed its ‘Fan Bracket Billboard’ near the Patriots’ home in Foxborough, MA. In the bottom right of the billboard, Le Roy native Kyle Hobart is pictured.

Rich Barnes/USA TODAY SportsBuffalo Bills mascot Billy Buffalo walks in the empty stands prior to the game against the Pittsburgh Steelers at Bills Stadium.

Image via FOX Sports This week, FOX placed its ‘Fan Bracket Billboard’ near the Patriots’ home in Foxborough, MA. In the bottom right of the billboard, Le Roy native Kyle Hobart is pictured.

The excitement surrounding the Bills’ first AFC East title in 25 years brought with it plenty of emotions, but also plenty of questions.

Will the Bills rest their starters in the final two games of the season? What seed will they get? What team will Buffalo play in the first round of the playoffs?

But the most pressing question of them all, one that has hung over the heads of Bills fans like a dark cloud all season long, is will fans be allowed inside Bills Stadium by season’s end - and more specifically, for the team’s first home playoff game since ’96?

It’s been like torture for ‘Bills Mafia’ having to watch this season, the most successful the team has had in over two decades, from home.

“I went to the first two Bills’ Super Bowls with my father, and I was hoping to share this (season) with my three sons. ‘Bills Mafia’ needs to be back in that stadium and parking lots,” said Le Roy native Kyle Hobart. Hobart has been a Bills season ticket holder for over 25 years and was one of the fans featured on FOX’s ‘Fan Bracket’ billboard, which was installed this week near the exit to Gillette Stadium, home of the New England Patriots in Foxborough, MA.

“We have waited so long for this type of team and to not be in that stadium is just another gut punch from 2020,” added Hobart. “The home schedule this year was amazing, and it’s just not the same cheering on this team from your couch.”

As difficult as it’s been for fans to watch their team from home, Cal-Mum boys basketball coach and longtime Bills’ season ticket holder Dan Dickens says it’s not too late for ‘Bills Mafia’ to create a few of the memories fans have missed out on this season.

“I feel the atmosphere at a playoff game this year would be unbelievable with all of the pent up emotions from not being able to go to any games,” said Dickens. “That would be incredible, and those memories would last a lifetime.”

New York Gov. Andrew Cuomo has remained steadfast all season, consistently referencing the rising number of COVID-19 cases in the Western New York region as the reason why allowing fans to gather at One Bills Dr. will not be permitted. Cuomo has said the decision of whether or not to let fans inside Bills Stadium is one he has left up to the New York State Department of Health, and NYSDOH Commissioner Dr. Howard Zucker, who says his biggest concern about the return of fans isn’t necessarily what happens once the fans are inside the building.

“Our biggest concern with allowing fans at Bills Stadium is what happens with people tailgating outside the stadium before the game,” Dr. Zucker said previously.

As the waiting game continues, Cuomo has appeared to remain hopeful that ‘Bills Mafia’ will be able to make its long-awaited return to the stands this season.

“I want to attend a Bills game,” Cuomo said on a conference call on Sunday. “I’ve attended them in the past. It was a great game (against the Broncos), by the way. That was just unbelievable. I mean, really incredible. You almost sense the energy and the optimism and the confidence, the way they played, and Josh Allen was just unbelievable.”

The Bills organization has also continued to cling to hope that they’ll be able to play in front of their fans by season’s end.

“We’re a community team. We’re one big family. That’s the cool part about coaching for a team that there’s a partnership between the fans and the team. I think that’s what makes it special,” said Bills head coach Sean McDermott after Saturday’s win. “It’s just such a cool place to be a part of because of the work ethic of the people around Western New York. I love seeing Bills’ flags waving out in people’s yards, and I’m hoping there are a lot more people buying Bills flags tonight. I’m humbled just to be a part of it.”

While he remains hopeful that fans will once again (partially) fill the seats at Bills Stadium, McDermott understands that decision is out of his and the organization’s hands, but added conversations with state authorities have been encouraging.

“Obviously that decision falls not in my lap but in (the lap of) the powers that be at the state level,” said the Bills’ head coach during his Monday afternoon press conference. “I appreciate them being open-minded to it, it sounds like. I know that we would love the opportunity to have fans. I certainly appreciate the way that the conversations have taken place over the course of the year in a way that’s healthy and respectful.”

One event that’s left some fans concerned about a potential rise in the infection rate, thus harming the prospect of fans returning to Bills Stadium, is the gathering at Buffalo Niagara International Airport that took place late Monday night and into Sunday morning. Thousands of Bills fans flocked to the area near where the team’s plane landed, in complete disregard for the COVID-19 protocols that have been instituted by local governments. There were those without masks, and social distance was impossible to maintain as more and more fans continued to show up and pack the area near the Bills’ gate.

After the team’s arrival, some fans were even able to break through security and get within feet of Bills players’ cars as they drove out of the parking lot. One even came within arm’s length of cornerback Josh Norman, screaming through an open window of Norman’s car.

Reporters asked McDermott if he was concerned with the proximity between fans and his players at the airport this weekend.

“It’s something we always want to be smart about. We did talk about it, just trying to be smart about it, as these are unprecedented times,” said McDermott. “I hope everyone was as smart and careful as they’re able to be. This virus transmits - I’m not a doctor - in ways that I don’t even know about. I pray for my team and for everyone that was out there that they’ll be able to remain safe.”

Without a doubt, the safety of all involved remains paramount. But with teams around the league being permitted fans, and the Bills enjoying their most successful season in decades, ‘Bills Mafia’ will continue to ask, “Why not us?”

“We see football stadiums around the country with fans and haven’t heard about an explosion of cases due to their attendance,” said Hobart.

“It’s a big enough stadium to be able to enforce social distancing. Bills fans want this opportunity to be there in person to cheer on their team,” added Dickens.

There are more significant concerns with which to be dealt during the days of COVID-19. But for Bills fans, it’s going to be impossible to ignore the possibility of their return to the stadium over these next several weeks.

The Bills are back, hosting a home playoff game for the first time since the Bill Clinton administration.

The fans want to come home too.