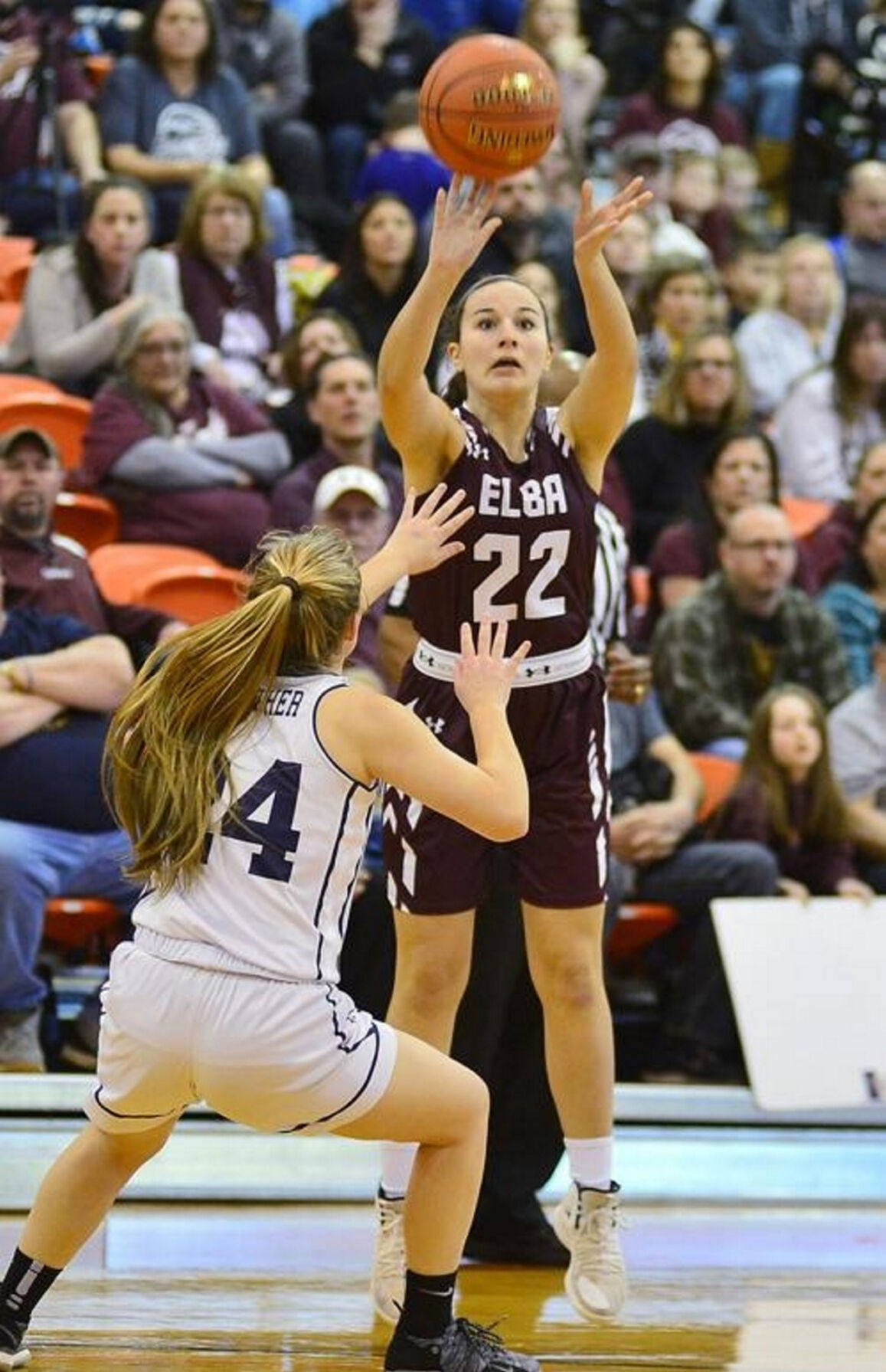 File Photo Dakota Brinkman will be entering her fourth varsity season with the Elba Lancers this winter. 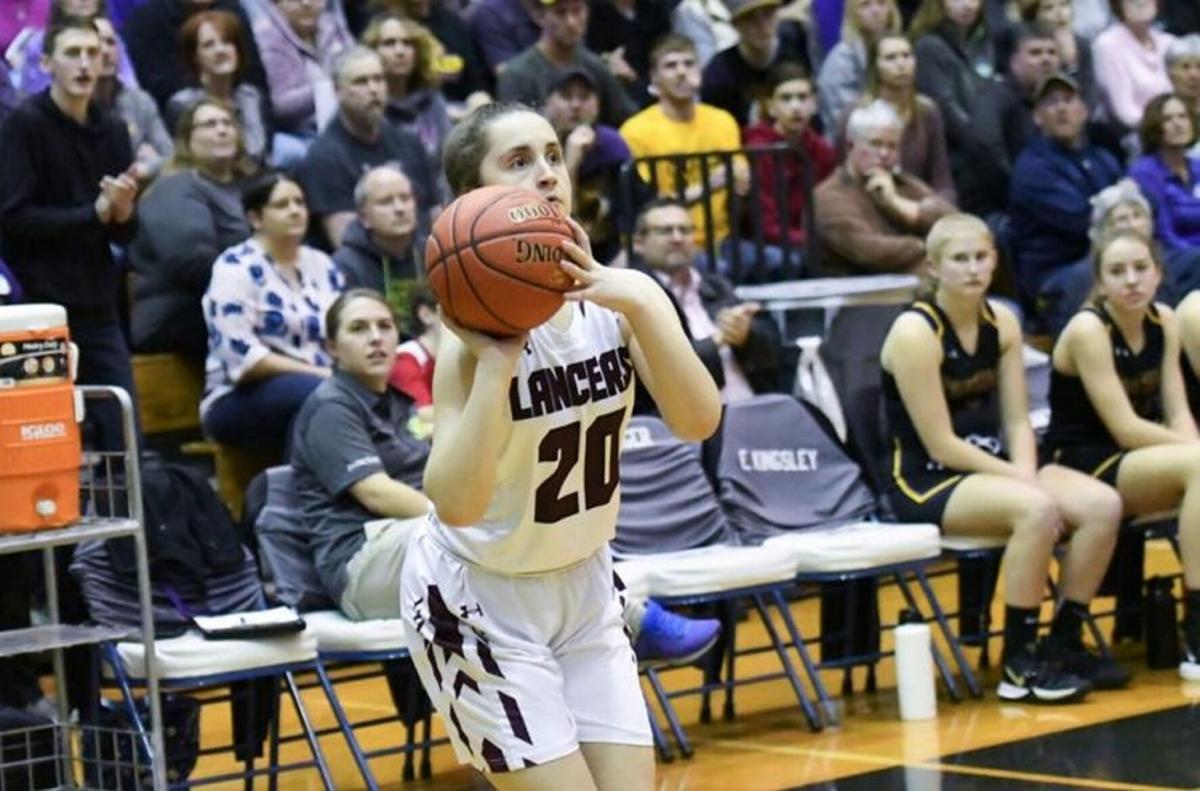 File Photo Laci Sewar will be one of two experienced seniors returning for Elba this season.

Photo Provided Zach Marsceill (left) and CJ Gottler will be the captains of the Elba boys basketball team this season.

File Photo Dakota Brinkman will be entering her fourth varsity season with the Elba Lancers this winter.

File Photo Laci Sewar will be one of two experienced seniors returning for Elba this season.

Photo Provided Zach Marsceill (left) and CJ Gottler will be the captains of the Elba boys basketball team this season.

ELBA — There is one thing that has been a constant in small school girls basketball over the past number of years and that was knowing that Elba was going to be in the mix — lets face it, the favorite — in Class D2 and they never fell short. Last season the Lancers rolled to a perfect 14-0 record and won their fifth straight Section V Class D2 block.

Over the past five seasons Elba has gone an impressive 99-14, but things are about to be a little different this winter.

In a somewhat stunning move, head coach Tom Redband and his wife/assistant coach Marci Redband stepped down from their roles following eight incredibly successful seasons at the helm in taking over for legendary coach Tom Nowak. In his eight seasons as head of the Elba program, Redband was a spectacular 163-31.

However, it won’t just be Redband that the program will need to replace as new head coach Charlie Pangrazio — the longtime Lancers JV head coach — will have to find a way to fill the roles of a number of the most talented and successful players in program history.

Elba will be losing the services of seven seniors, including 1,000-point scorers Brynn Walczak, Maddie Muehlig and Leah Bezon, as well as longtime varsity player Taylor Augello, with those four stars having combined for 19 varsity seasons.

“We are a very young team with a good mix of experience coming from our seniors,” Pangrazio said. “Our goal is simple — get better every day and compete in every game we play.”

A pair of those experienced varsity seniors returning will be forward/guards Dakota Brinkman and Laci Sewar. An occasional starter last season, Brinkman will be the leading returning scorer for the team after she averaged 6.8 points per game as a junior. Meanwhile, Sewar was Elba’s top option off the bench last season and averaged 3.1 points with a solid presence in the post.

This youthful group — which is something Elba has heard before as many of those graduated seniors were starting when they were in eighth grade — will also look for significant contributions from sophomore guards Kennedy Augello and Haile Deville, sophomore forward Racheal Walls and freshman guard Sydney Reilly. Augello, Walls and Reilly all saw limited varsity action last season with Walls leading the way with eight games played and 11 points scored, while Augello and Reilly played in four and three games, respectfully.

“With losing three 1,000-point scorers to graduation, it will be an exciting challenge to get the new players to fill their roles on the team,” Pangrazio said. “It will not be easy but I believe they are up to the challenge.

Not weakening the schedule despite the losses, Elba is set to open the season at home on December 3 against Class B1 Batavia. The Lancers will meet Batavia twice this season, while they will also have other non-league games against Class B1 Depew and Albion, as well as a non-league matchup with Prattsburgh.

Last season was definitely the most trying one in the tenure of head coach Ciaci Zambito for the Lancers and likely the most disappointing. Despite losing players such as Colton Dillon and Collin O’Halloran to graduation after advancing to the Class D2 title game in 2020, Elba still had high hopes last winter in the condensed campaign with a number of talented players with experience coming back.

And everything started well enough. The Lancers opened with a win over eventual sectional champion Wheatland-Chili and then had a strong win over rival Notre Dame to move out to 3-1 early in the season. But then the wheels fell off. A tough loss to Attica started Elba on a five-game losing streak, which ended with stunning losses to Byron-Bergen and Holley and then with the remainder of the season cancelled due to COVID-19 protocols after a player from an opposing team tested positive for the virus.

In all the Lancers finished at 3-6 but Zambito, who is already entering his seventh season at the helm of the program, is making no secret about the fact that he is excited about this year’s group.

“The first thing I’ll say is this is as ‘together’ or close of a group as I’ve had in quite a long time, and I think that’s extremely important,” Zambito said. “The guys enjoy being around each other and already have established a real family atmosphere.”

Leading the way back will be a pair of guards with vast varsity experience in Zach Marsceill and CJ Gottler, who will serve as the team’s captains. Marsceill will be entering his fourth varsity campaign, while Gottler will be in his third and they are two of the team’s top scorers from a season ago.

Also returning this winter will be a junior guard with plenty of promise in Connor Scott, who flashed at times last season in his sophomore season what he will be capable of doing at the varsity level.

“We have great leadership from all of our seniors,” Zambito said. “Zach and CJ are our captains this year, but I can’t speak enough about the overall attitude and vibe of our team. They are willing to listen and work, they understand the responsibilities in being apart of the Elba Basketball Program, and they are hungry to win. I’m really excited to see where this season takes us.”

Zambito will also be bringing up a pair of sophomore forwards from the JV team who will look to make an immediate impact in Mike Long and Angelo Penna, while Nate Esten and Caden Muehlig are the only other seniors with varsity experience on this somewhat young roster.

Elba has been one of the top small-school programs in Section V since Zambito and his staff took over. The Lancers captured the sectional title in 2017, advanced to the sectional title game in 2020, they are a two-time Class D2 No. 1 seed and they have won three Genesee Region League championships since 2016.

Elba is set to open its schedule at Route 262 rival Byron-Bergen on December 8.