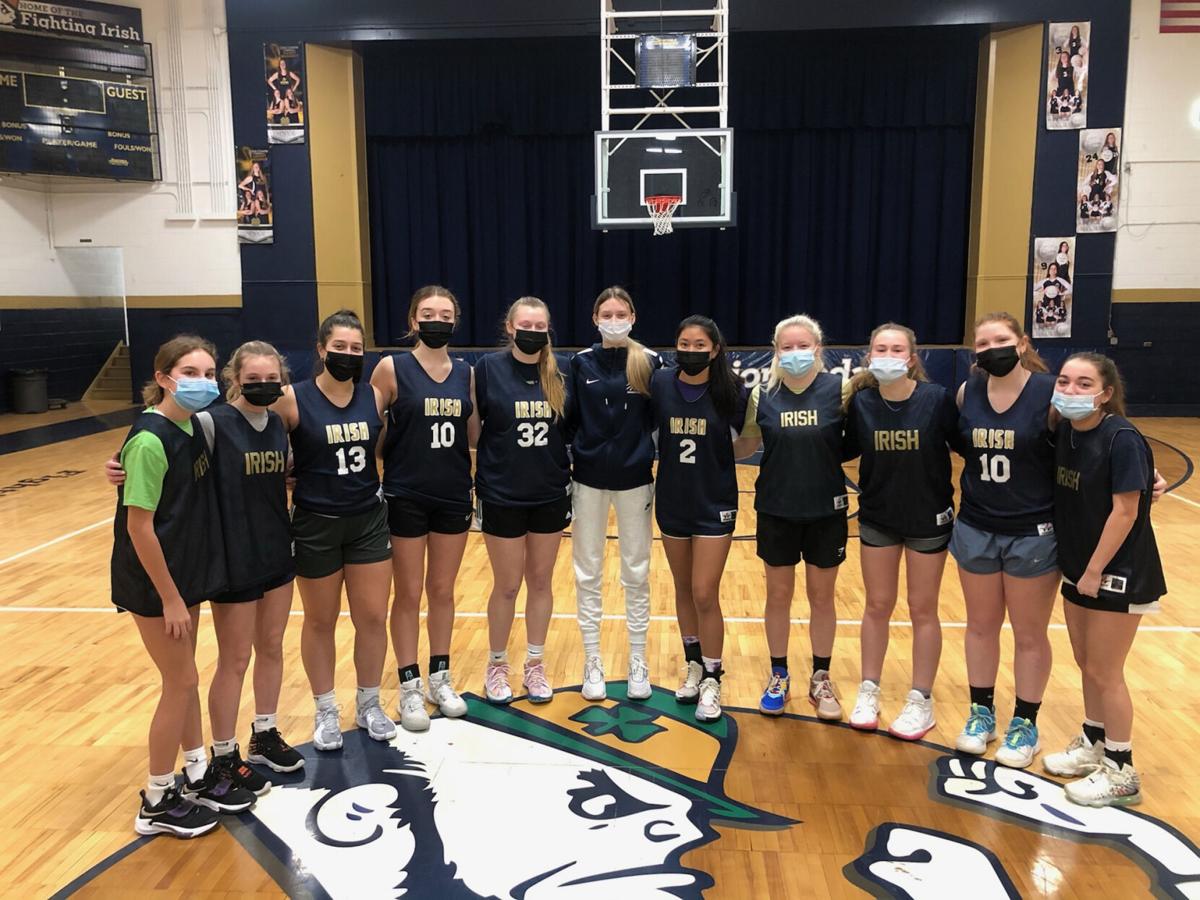 Photo Provided The Notre Dame girls will be looking to defend their Section V Class D2 title this season. 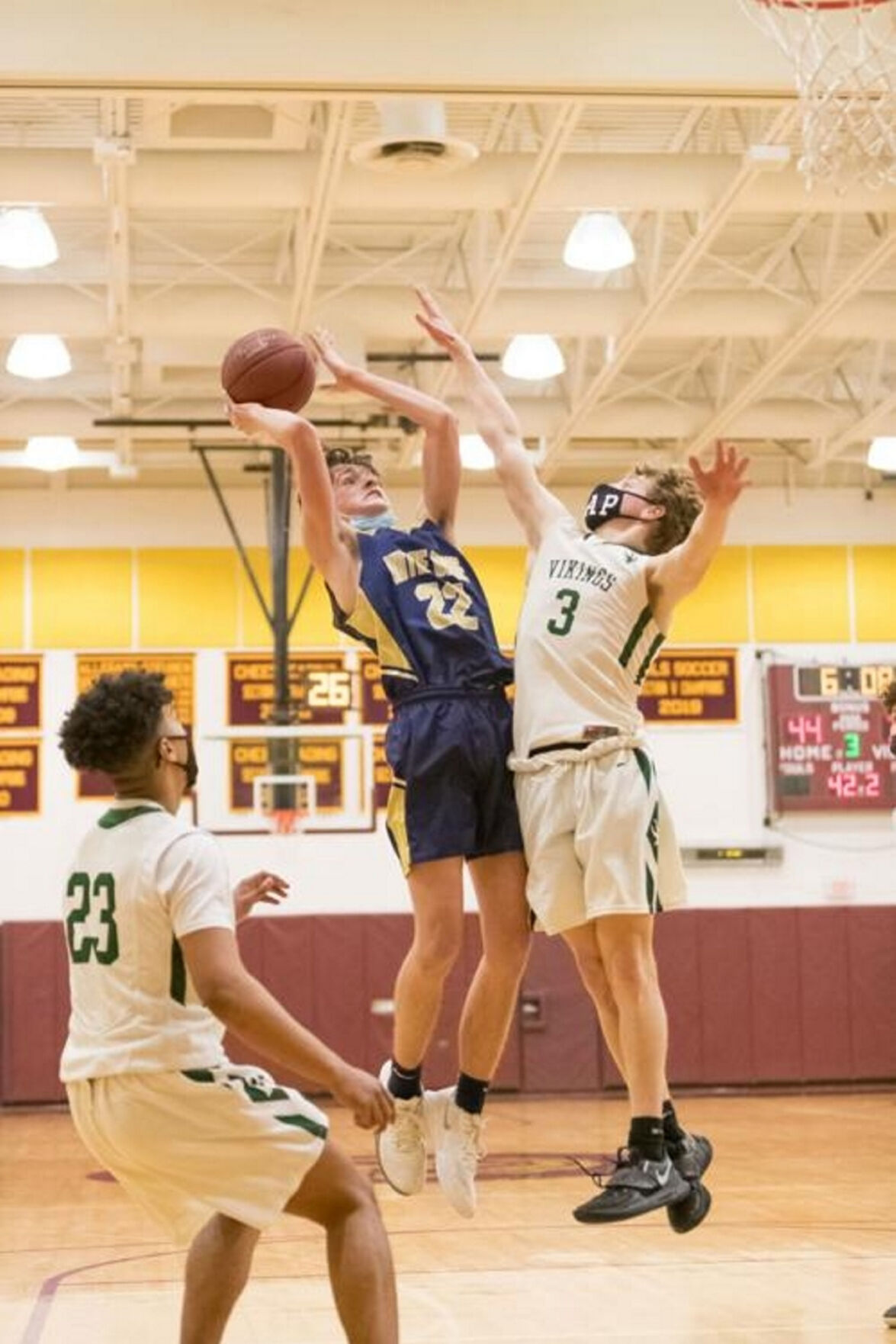 File Photo Jimmy Fanara averaged over 15 points per game last season and will be one of thew top returnees for ND this winter. 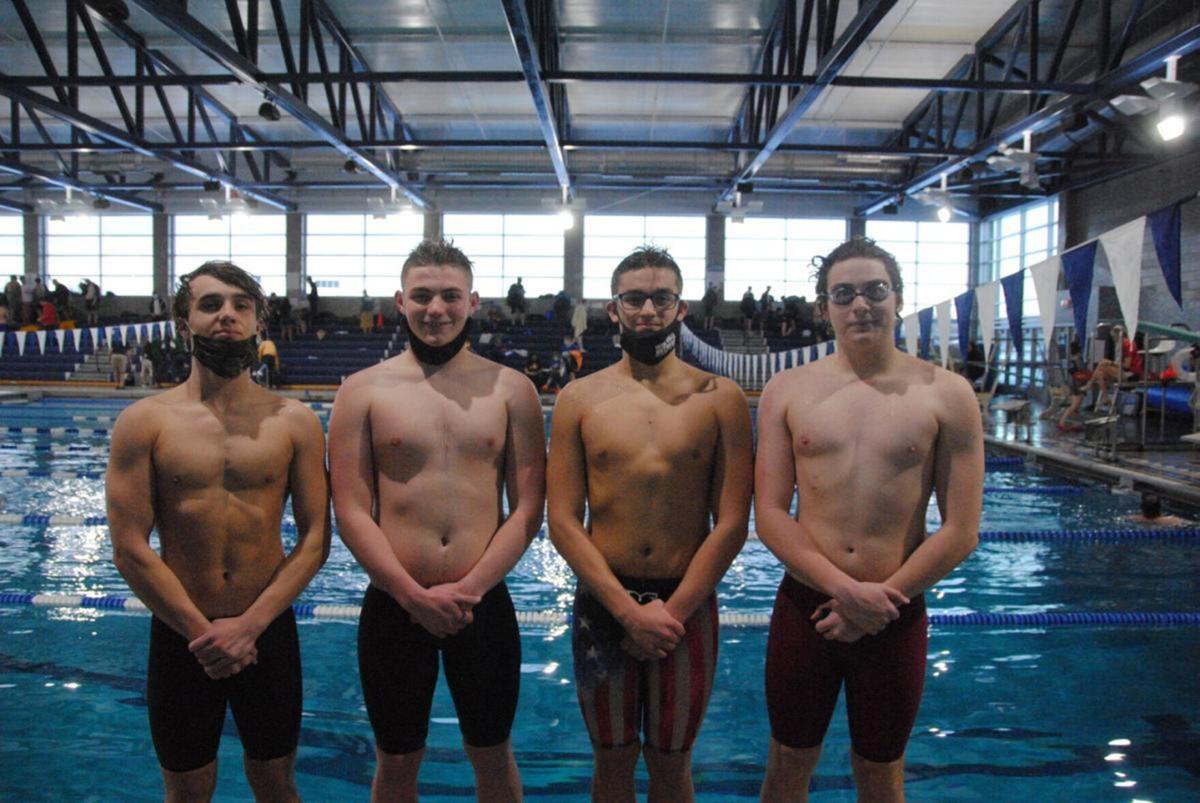 File Photo Harrison Southall, Aaron Treleaven and Matt Doeringer (along with the graduated Cooper Mattice in the photo) will return for Notre Dame/Batavia this season.

Photo Provided The Notre Dame girls will be looking to defend their Section V Class D2 title this season.

File Photo Jimmy Fanara averaged over 15 points per game last season and will be one of thew top returnees for ND this winter.

File Photo Harrison Southall, Aaron Treleaven and Matt Doeringer (along with the graduated Cooper Mattice in the photo) will return for Notre Dame/Batavia this season.

BATAVIA — With just two seniors on the roster last winter, the Notre Dame girls basketball team once again made it to the top as the Fighting Irish finished at 12-2 and captured the Section V Class D1 title. This was the third Section V title in the relatively short career for head coach Tom McCulley, but he could have his work cut out for him this season.

McCulley’s daughter Amelia — a junior who averaged nearly 23 points per game last season – is likely to miss most, if not all, of the 2021-22 campaign with a torn ACL. In a weird twist of fate, her senior brother Colin suffered the same injury just weeks before.

“Hopefully we can continue to build off the success we have had in recent years,” Coach McCulley said. “Our girls should be very competitive this year. Even though Amelia will most likely miss this season we have a good group coming back. The girls and I know we all have to step up and buy in to what we need to do in order to be in a position to make a run at the end of the year.”

The Irish will be led by senior forward Lindsey Weidman and junior forward Avelin Tomidy, both of whom are coming off solid seasons. Weidman led the team with 8.6 rebounds per game last season to go with 7.7 points per game, while Tomidy came into her own as a defender and was fourth on the team in rebounds.

Notre Dame will also return senior forward/guard Maylee Green — the team’s top defender — who was second on the team with 7.9 rebounds per game to go with four points per night.

Emma Sisson (3.7 ppg., 5 rpg.) is another player that can defend and will have an opportunity to step up this season into a larger role, while helping her in the backcourt will be Judah MacDonald (3.1 ppg.).

“The key to this season will be our defensive energy,” McCulley said. “If we can give consistent effort on defense and solid offensive execution we should be in good shape.”

Notre Dame will open its season at home on Thursday against Section VI’s Albion.

One way or another, this will be an interesting season for the Fighting Irish.

This will be the final year on the sidelines for legendary Hall of Fame coach Mike Rapone, who will step down following the campaign before his son, Mikey, takes over the program. Meanwhile, Notre Dame will head into the winter with some question marks as its two top players from last season not be in the lineup.

After an up-and-down regular season, Notre Dame put it together at the right time and advanced to the Section V Class D2 final before falling and finishing the season at 7-7. However, senior Colin McCulley is out for the season with a torn ACL, while Mark Sanders Jr. graduated, leaving the Fighting Irish with a relatively young and inexperienced group.

“We have a balanced group of returning players and new additions who will need to step up to replace the loss of Colin and Mark who were consistently outstanding for us the past two seasons,” Rapone said. “Our goal is to build off last year’s success and compete for Batavia Lions Club Tournament, GR Division II and Section V Class D2 Championships.”

Point guard Jordan Welker also returns after having a solid season last year when he averaged 6.8 points and 4.7 assists.

This year will also mark the return of senior guard/forward Cody Henry, who didn’t play last season but averaged 7.8 points and 5.5 rebounds per game as a sophomore.

Notre Dame will also have the services of a quarter of players that are coming up from coach Rick Rapone’s undefeated JV squad from a season ago in juniors Hayden Groff and Bryceton Berry and sophomores Jaden Sherwood and Jay Antinore.

“We will play multiple defenses which will include more ball pressure schemes and offensively will look to ‘play fast’ in an attempt to take advantage of our team speed and depth,” Rapone said of this year’s group.

“GR Division II will be extremely competitive this season with Wheatland-Chil coming off a sectional title, Elba returning three starters and B-B has a group that was extremely successful on JV in 2020,” Rapone said. “Division II teams will have to play well to win on any given night but especially when playing on the road.

“GR Division I also has depth in team strength will O-A returning a talented group that won a sectional block in 2021, Pembroke has a talented returning group as well as players from a solid JV team of players, Alexander returns three starters from a solid team and Holley will have one of their strongest squads in a few seasons,” Rapone added.

Notre Dame will open its season at South Seneca on Tuesday.

Multiple-time Genesee Region League all-stars in juniors Aaron Treleaven and Cooper Fix and juniors Harrison Southall and Matthew Doeringer will all be back in the pool this season looking to add to their already-solid careers.

Treleaven is a sectional Finalist and is super-focused after missing sectionals last year due to COVID protocols. Just tenths off of the school record and seconds off the state cut time in the 500 free, Treleaven is also looking to take over the backstroke duties for the NYS Qualifying 200 Medley Relay.

Another sectional Finalist, as well as a NYS Qualifier, Fix is the breaststroke specialist and is just off from the state cut time in the 100 Breaststroke. Fix is another strong freestyle sprinter for the Irish/Devils.

A sectional finalist and NYS Qualifier himself, Harrison is a diverse swimmer who can be put into any event and compete at the top. Harrison was a NYS qualifier in the 100 Fly and a part of the qualifying 200 Medley Relay.

Another sectional finalist and NYS Qualifier, Doeringer can swim any event, but he is starting to focus in on the 100 Fly, 100 Free, and 200 Free.

“We have a lot of options going into meets,” longtime head coach Eric Geitner said. “It is a luxury to have four guys that can swim any event and be able to win it. That makes meets exciting. We can put those four guys together and they have a shot to make State Qualifying times in the relays, that is something that small schools just don’t get very often. And with only eight guys, winning events and getting our second entry to place high is going to be imperative in a six-lane pool against a large roster team. Our rookies and second-year swimmers have shown a lot of potential, so we need to keep developing them and teaching them all four strokes. There has been some great talk among these guys in practice. They are ready for the season to start.”

This will be the second year that the Notre Dame and Batavia girls will be merged and it has enhanced the program to be competitive in every meet. It has given the program the needed depth behind the top swimmers on the team to keep meets against the big teams close.

The Fighting Irish/Devils were a solid 6-4 last winter.

ND/B will lean on four solid returning GR all-stars or honorable mention all-stars in seniors Sophie Fulton and Maggie Woodruff and freshmen Maddy Bellamy and Lillian Emerson, who can all step into any event and be competitive in it. Fulton, Woodruff, Bellamy, and Emerson can be put into any event and make a run for the win.

While each swimmer has their individual event (Fulton - IM and Fly; Woodruff - Breaststroke, Backstroke, and Fly; Bellamy - Backstroke and Free; Emerson - IM and Fly) they can easily be moved around where needed on any particular night. The roster has grown to 16 girls, which gives the coaches the needed people to fill events and not give points away.

“We have a nice bunch of girls that are training hard and improving every day,” Geitner said. “We have six new girls on the team this year that are really picking things up quickly and will make an immediate impact, while our veterans are focused and providing great leadership. The girls from both schools have melded well and work great together. We are looking forward to a great season.”